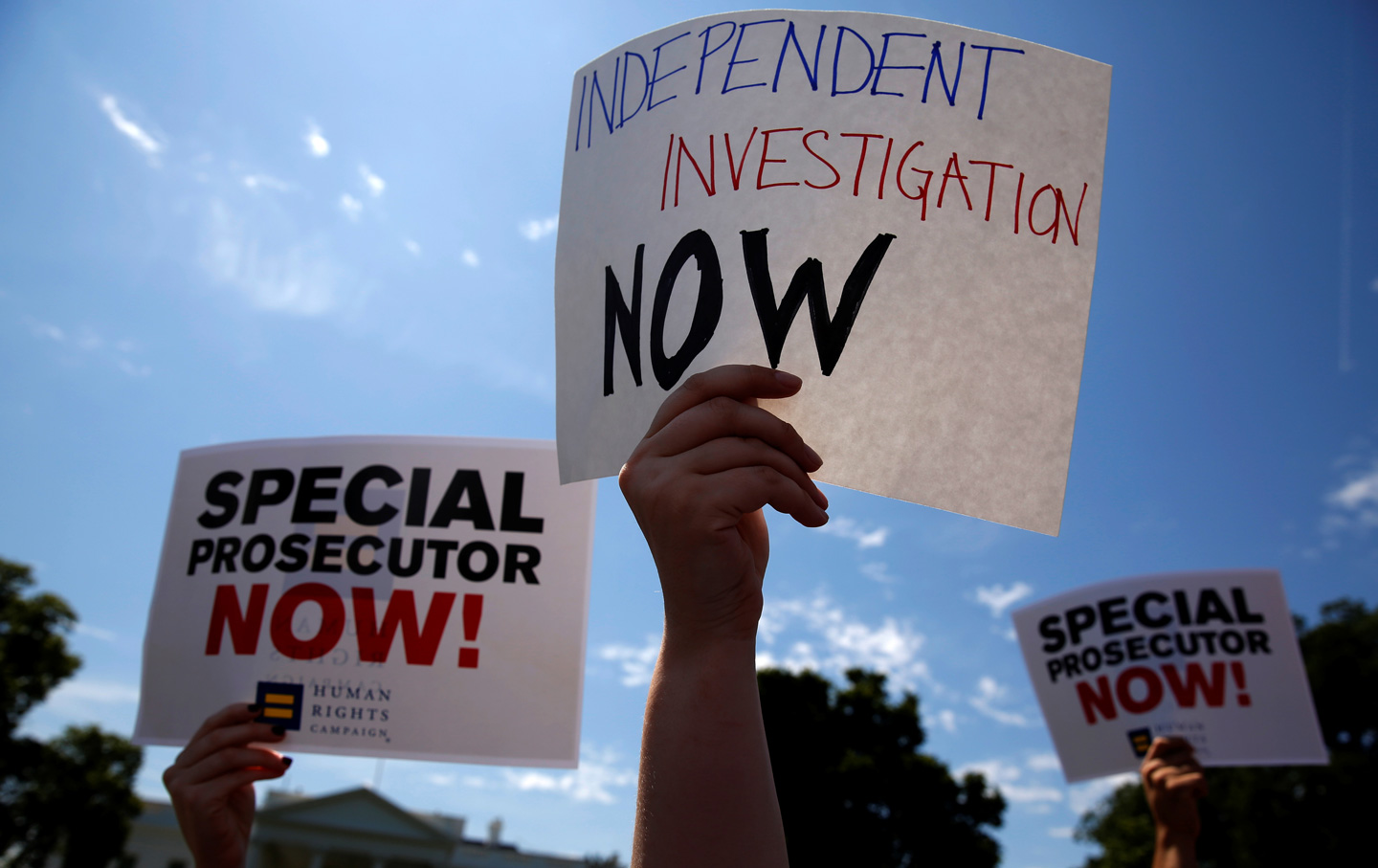 With the firing of FBI director James Comey, President Donald Trump has moved deep into Watergate territory, with possibly dire consequences for the country and for him. Just days before his firing, Comey had publicly reconfirmed that he was investigating whether Trump’s campaign associates had colluded with Russians in tampering with the 2016 presidential race. Trump’s actions put the question of whether he committed obstruction of justice and/or an impeachable offense into sharp relief. The president has admitted he was thinking about the FBI’s Russian investigation—which he has strongly criticized in the past—when he decided to fire Comey. Further, suggesting a cover-up motive, the White House staff gave contradictory explanations and pretexts for the firing that obscured a connection with the Russian investigation or were simply incredible.

For those of us who witnessed Watergate firsthand, this has a familiar ring. In 1973, President Richard Nixon ordered the firing of Special Prosecutor Archibald Cox because he feared that Cox was close to getting White House tape recordings that could have implicated him in the Watergate cover-up. I was a member of the House Judiciary Committee then, a bipartisan majority of which voted that the firing was part of the Watergate cover-up (similar to an obstruction of justice), a grave abuse of presidential power, and constituted an impeachable offense.

Instead of derailing the investigation, firing the special prosecutor ensured that it would continue. When the attorney general and the deputy attorney general, both Republicans, resigned rather than obey Nixon and fire Cox, the country realized something terrible had happened. The public outcry forced the selection of a new special prosecutor, who was able to get possession of the tapes, thanks to a unanimous Supreme Court ruling (which included Republican justices appointed by Nixon). The tapes showed Nixon’s guilt beyond any doubt. In fact, the Saturday Night Massacre, as the events surrounding Cox’s firing were dubbed, triggered the impeachment proceedings against President Nixon and marked the beginning of the end of his presidency.

Nixon’s tactics backfired because the system of checks and balances clicked into place; the public demanded that the president be held accountable for his actions, and Republicans stopped defending him at every turn, putting country above party.

But will that happen again now?

It is dismaying to think that Trump, a possible target of the Russian investigation, can pick who he wants to investigate him. Given reports that President Trump asked Comey for a loyalty oath at a private White House dinner, a request more appropriate for a mafia don than a United States president, isn’t “loyalty” going to be a major factor in his selection decision? And, if so, what happens to this critical investigation? If it is squelched, or pursued less than fully, aggressively, and professionally, how will we know whether our president criminally interfered with the 2016 presidential election or is beholden to a hostile foreign government?

If Attorney General Jeff Sessions participates in the selection of a new FBI director, the choice will be tainted. Aside from the fact that Sessions concealed his own contacts with the Russians from the Senate—some say he lied in his confirmation hearings—Sessions recused himself from anything “directly or indirectly” related to the Russian inquiry. He has already violated the terms of his recusal by recommending Comey’s firing; he must not be permitted to violate it again by participating in the selection of Comey’s replacement. Sessions is irredeemably compromised and should resign. If not, he should be impeached.

A key test of whether Republicans are willing to put reasonable checks on a president under investigation will be the confirmation process. The Senate should refuse to confirm anyone for FBI Director whose record does not exemplify the highest qualifications, unimpeachable integrity, and complete lack of partisanship. It should also demand as a condition of confirmation that the FBI’s ongoing Russia investigation be independent.

There is important precedent for this. In 1973, President Nixon named Republican Elliot Richardson as Attorney General not long after allegations became public that higher-ups were involved in Watergate. Richardson was well qualified, but the Senate refused to confirm him unless he promised to appoint a Special Prosecutor who was highly respected, who would be given full independence to conduct a proper investigation, and who couldn’t be fired except for “extraordinary improprieties.”

The Senate should seek similar guarantees of independence for the Russia investigation by refusing to confirm a new FBI director unless the deputy attorney general appoints a special prosecutor. Senate minority leader Chuck Schumer has already suggested that the Democrats won’t support any confirmation without a special-prosecutor appointment. Republicans should join them. The Senate should also ask for additional commitments, such as requiring the new director to advise the Senate if any effort is made to interfere with the investigation.

For the legislative branch to play an effective role vis-à-vis a president who may be subject to investigation, all this and more needs to happen. Beyond confirmation hearings, Senate and House Intelligence Committees pursuing the Russia inquiry need to press forward quickly, thoroughly, and in a bipartisan fashion.

The question is, will Congress take these steps? Judiciary Chair Chuck Grassley, known for a bit of independence and statesmanship in the past, doesn’t leave much room for hope. When asked about similarities between the Comey firing and the Saturday Night Massacre, his response was, “Suck it up and move on.” But there’s one thing that’s the same about 1973 and today that no one should dispute or talk past: Just like Watergate, Comey’s firing now demands political courage; it obligates senators from both parties to search out the facts relentlessly, face up to them, and follow the Constitution.