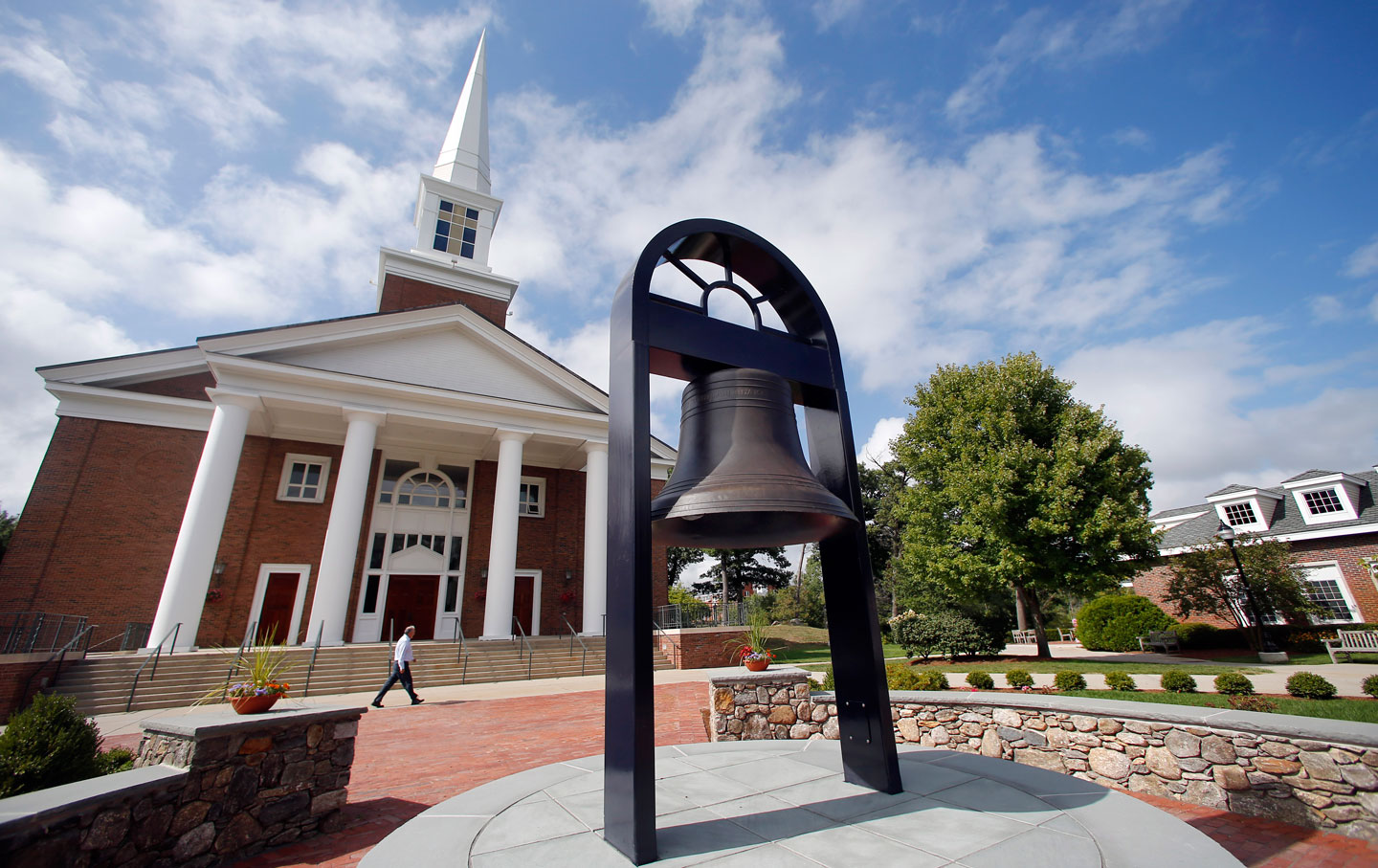 A man walks by the campus chapel and bell at Gordon College in Wenham, Massachusetts, one of the many conservative religious institutions struggling to find their place in a landscape rapidly changing in favor of gay rights. (AP Photo / Elise Amendola)

Trigger warnings, safe spaces, micro-aggressions—in 2015, pundits, politicians, and other serious people had a lot of fun bemoaning academia as a liberal la-la land where hands are held and minds are coddled. I’m rather old-school when it comes to free expression. I didn’t go for author and Northwestern professor Laura Kipnis’s notorious essay cheering professor-student affairs, but surely it was overkill for grad students to bring charges against her under Title IX for having a “chilling effect” on student victims’ willingness to come forward. Wouldn’t writing a letter to the editor have sufficed? As for dropping Ovid’s Metamorphoses from the Literature Humanities core class at Columbia after students demanded trigger warnings about its accounts of rape: Wasn’t it bad enough that Ovid was shipped off to Romania? Must his beautiful poems follow him into exile?

Attacks on “political correctness” champion educational values: the importance of grappling with challenging ideas and texts, mixing it up with different kinds of people, expanding your worldview, facing uncomfortable facts. How will students grow into strong, independent adults in a tough and complex world if they’ve spent four years lying on a mental fainting couch? Good question. There’s a whole swath of academia, though, that gets left out of the discussion, despite the fact that its restrictions on speech and behavior, on what is taught in the classroom or argued in a lecture series, would make Yale and Northwestern and the rest look like New Orleans during Mardi Gras. I’m referring, of course, to evangelical and Catholic colleges. Some of these have no compunction about limiting freedoms that other colleges consider just a part of normal life. Many have strictures on dress (“no more than two piercings in an earlobe are allowed” for women at Pensacola Christian College), on dating and social life, even on how faculty members conduct themselves in their own homes. Lisa Day, who taught English at a small Christian college in Appalachia, told me in an e-mail: “In the year before I arrived, the then-president required regular, often unannounced inspection of faculty residences, and any alcohol was confiscated—including vanilla extract.” Students have been expelled for being LGBT; professors have been fired or forced to resign for coming out as transgender, for getting pregnant outside marriage, or for getting divorced. According to a report by the Human Rights Campaign, there was a sharp uptick last year in the number of schools that requested and received exemptions to Title IX, the federal law prohibiting sex discrimination. From 2013 to 2015, 35 schools obtained waivers from the US Department of Education that would allow them to discriminate against students and faculty who are LGBT, female, or pregnant.

Should religious colleges that win federal dollars get exemptions from Title IX, which prohibits sex discrimination?

Religious colleges also have plenty of restrictions on intellectual inquiry and debate, as well as on political associations. Student clubs for nonbelievers can be restricted: the University of Dayton, Notre Dame, and Baylor, all religious schools, refused requests to recognize atheist or humanist student organizations. In 2009, Liberty University even banned the student Democratic club. (University president Jerry Falwell Jr. recently made headlines for calling on students to “end those Muslims” by carrying concealed weapons.) Conservatives stood up for free speech at Yale in 2015 when students protested a lecture invitation to Ayaan Hirsi Ali, a critic of Islam, from the conservative William F. Buckley Jr. Program speaker series. I agreed with conservatives on this one—but where are they when the shoe is on the other foot? Catholic colleges, for example, will not invite supporters of abortion rights: The Catholic University of America even banned the actor Stanley Tucci from speaking on Italian cinema because of his support for Planned Parenthood.

Around 20 years ago, when I spoke at two Catholic colleges, I had to sign a statement promising that nothing I said would offend Catholic doctrine. (The embarrassed professors who invited me sprang the document on me about an hour before my scheduled talk.) Most speakers responding to an e-mail query had never heard of such a contract and praised their experiences on Catholic campuses, but one speaker sent me the contract she had to sign with the University of St. Thomas in St. Paul, Minnesota, in 2014. It reads, in part: “Speaker agrees to refrain from presenting or performing material that is derogatory of the Catholic Church, contains sexually explicit actions or gestures, expletives and/or other obscenities, or contains racial slurs or is otherwise derogatory of any race, religion, sexual orientation, age or national origin.” Talk about catering to student sensitivities (to say nothing of those of the US Conference of Catholic Bishops). Can you imagine the furor if Yale made Ayaan Hirsi Ali sign such a contract?

When it comes to academic content, it’s hard to argue that a college that makes faculty adhere to Christian fundamentalist tenets, or that refuses to let its students engage with pro-choice speakers even when they’re talking on another subject, is providing an intellectual toolbox for the modern world. Wheaton College in Illinois (not to be confused with secular Wheaton College in Massachusetts) suspended Larycia Hawkins, an associate professor of political science who donned a hijab in solidarity with harassed Muslims, for writing on her Facebook page that Christians and Muslims “worship the same god.” Well, as theology it’s debatable, but that’s the point: Debate has no place at Wheaton, which requires faculty to sign a faith statement declaring their belief in the literal Adam in Genesis. (Don’t laugh—in 2011, John Schneider, a professor of theology at Calvin College, was forced into retirement after publishing an article that questioned the story of Adam and Eve.) When Darwinism—the foundation of modern biology—cannot be taught, what kind of an education are students getting?

The answer to complaints like these is usually: Religion is different. You can’t hold its tenets to normal scholarly standards because, well, it’s faith. Thus, if Patrick Henry College, like many others, insists that its faculty and students profess that every word in the Bible is literally true, that’s their right—end of story. Besides, as Greg Lukianoff, president of the Foundation for Individual Rights in Education, told me, these institutions are private and can set up whatever rules they like (not that they should, he hastened to add). Moreover, the rules are no secret: Students and professors know what they’re signing up for. Truth in advertising isn’t the only principle at stake, though. After all, most of the campuses that star in liberal PC dramas are also private. If Yale made faculty and students contract to be warriors for social justice, would free speech and debate be off the table? You signed a statement of belief in Yale principles, but you invited an avowed Republican to address your politics class, and you keep “forgetting” your students’ preferred pronouns. Away with you!

If students are being denied a broad, mind-stretching education at universities often considered among the best in the world, what about the biased, blinkered, partial education that students are receiving at religious colleges? What about the assumption that no changing of the mind shall be permitted? Isn’t education supposed to challenge one’s settled beliefs?

And with Title IX exemptions in hand, colleges are free to ban and expel LGBT students, discriminate against women, use the Bible as a science text, and fire professors who disagree—without putting their federal funding at risk. The truth-in-advertising principle may protect the right of private colleges to do this. But the last time I looked, separation of church and state was still in the Bill of Rights.

Ramesh Ponnuru, a right-wing critic of academic-speech restrictions, bemoaned that “PC threatens the robust exchange of ideas,” but claimed that, when Wheaton put Hawkins on leave, “no serious person argued that the college had violated a principle of free speech.” How can he, and other conservative pundits, not see the irony there?