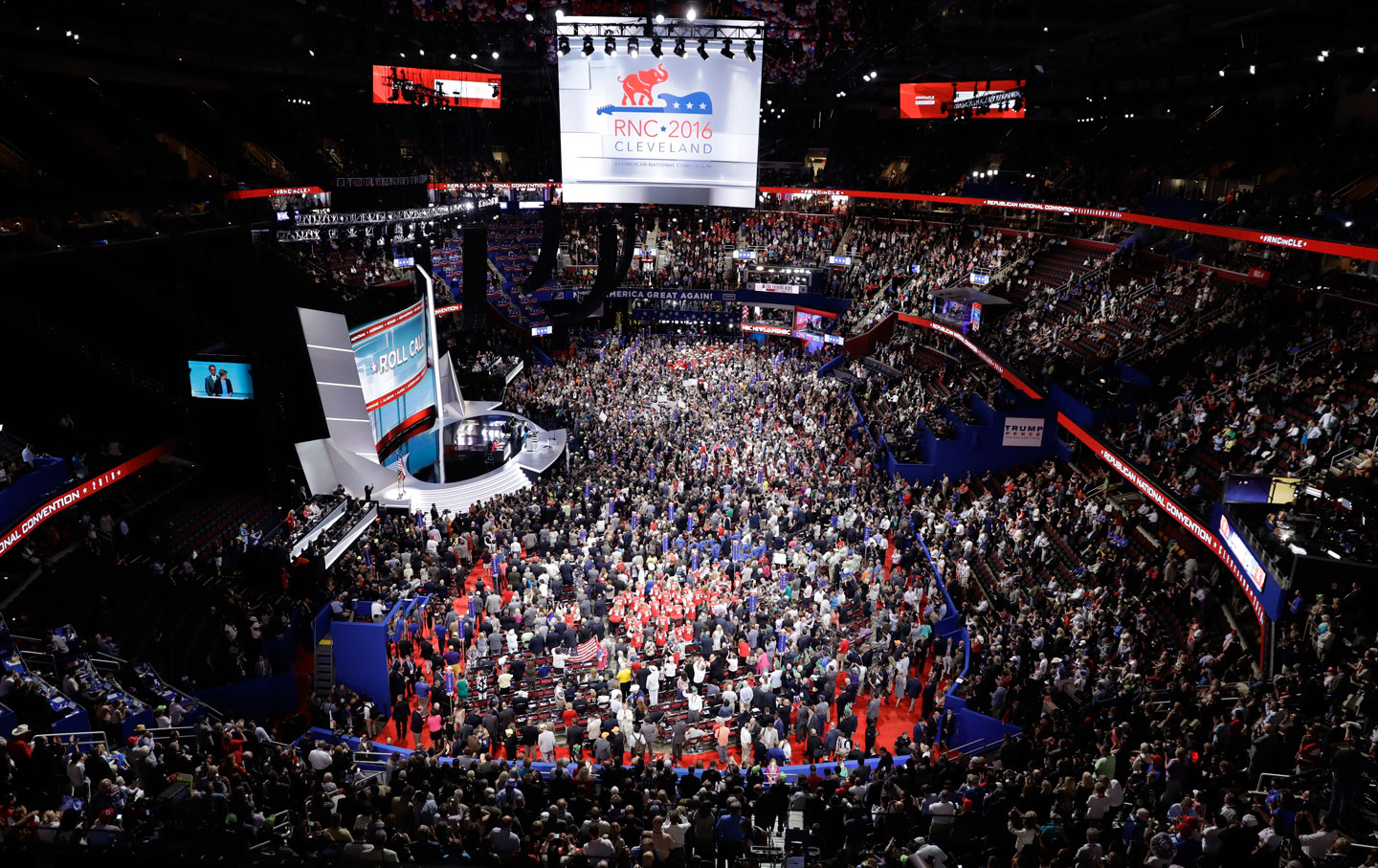 Delegates fill the floor during the second-day session of the Republican National Convention in Cleveland. (AP Photo / Matt Rourke)

Cleveland—They got the wrong Trump.

Donald Trump Sr. may be a short-fingered vulgarian, a compulsive liar, multiple bankrupt, and serial philanderer. Not to mention his terrible policy “ideas.” But on the evidence of tonight’s speech, Donald Trump Jr. might really have a future in politics. Unlike Senior, who also inherited a fortune from his father, Junior never pretends to be self-made. And though he also appears to have inherited The Donald’s chutzpah—his rant about “public schools that too often fail our students” was a bit rich, coming from a product of the Hill School (other alumni include filmmaker Oliver Stone, Edmund Wilson, and Lamar Hunt)—Junior seems to have dodged his father’s narcissism. On a night when Paul Ryan sounded like he was reading out confessions on North Korean state television and Mitch McConnell struggled to say anything positive about Trump beyond his not being Hillary Clinton, Trump Junior gave an articulate, enthusiastic endorsement of his dad. Which at least made a nice change from Bush 43 and his father.

Of course, Junior turned out to have taken part of his speech from an article written by somebody else—but since that somebody was a Canadian law professor, who got paid for helping draft Junior’s speech, we must, in the words of the immortal Tom Lehrer, “be sure to always call it please ‘research.’”

Junior also figured in the only piece of actual news here today, casting the votes of the New York delegation that put his father over the top for the nomination, triggering a minute (literally. I timed it) of tastefully restrained celebration, followed by a rousing rendition of “New York, New York.”

I was down on the floor at the time, chatting with the Utah delegation, who were about to get rolled by Reince Preibus. Back in March, Ted Cruz won nearly 70 percent of the votes in Utah’s Republican primary, entitling him to all 40 of the Beehive State’s delegates. But when the state totals were announced, all 40 votes had been awarded to Trump. The same thing happened to Alaska, which miraculously got recognized by the chair and demanded a poll of the state delegation—forcing a shamefaced Preibus to take the podium and explain which arcane rule allowed the party to take votes away from candidates who’d dropped out. But Chris Herrod, a Cruz loyalist from Provo and the Utah delegation’s resident parliamentarian, had no such luck.

Herrod, who drove to Cleveland with his wife (an alternate), daughter (also an alternate), and two other children, wasn’t happy about his family’s unexpected lesson in power politics. “We’re delegates. I’m supposed to get a vote. They don’t get to vote my vote. And that’s what they did,” he told me.

Matt Throckmorton, another Utahn for Cruz who runs a charter school in Riverdale, said he wasn’t surprised by the maneuver. “This is how it is. You just gotta know the rules better than the other side.” What worried him was what would happen after Trump’s defeat in November. “They’re gonna set Trump up to lose to Hillary—and then blame the conservatives,” he said.

After last night’s festival of blood and terror from the podium, it was a relief to spend time with actual delegates—even those loyal to Trump appeared happy to talk to a reporter, if baffled by what succession of unfortunate life events might lead a person to the political left. Kathy Bearden, an organic farmer from Michigan who when I first met her last summer at the Republican summer meeting here told me she liked Chris Christie and Carly Fiorina, had since come around to Trump.

“I look at the family he has raised,” she said. “Intelligent children. Successful children. They love him. They support him.”

Which seems true enough—though others might be inclined to credit Trump’s ex-wives. And who is to say America would be any safer with a President Christie?

Listening to Christie leading last night’s call and response over Hillary Clinton’s various offenses—while the crowd chanted “Lock her up!”—it was hard to believe this man had ever been appointed a US Attorney. You don’t have to be a Clinton fan (a charge on which I trust faithful readers will acquit me) to find something sordid in the way Christie set up a crude parody of a “trial”—accusing Clinton of being “an apologist for an Al Qaeda affiliate in Nigeria”—or to imagine, without much difficulty, the witchfinder wannabe we saw last night presiding over an actual lynching, should it prove politically expedient.

Two days among the Republican faithful have so far failed to convince me our republic would survive a Trump presidency. But in keeping Chris Christie out of the White House, he may have actually done his country a service.