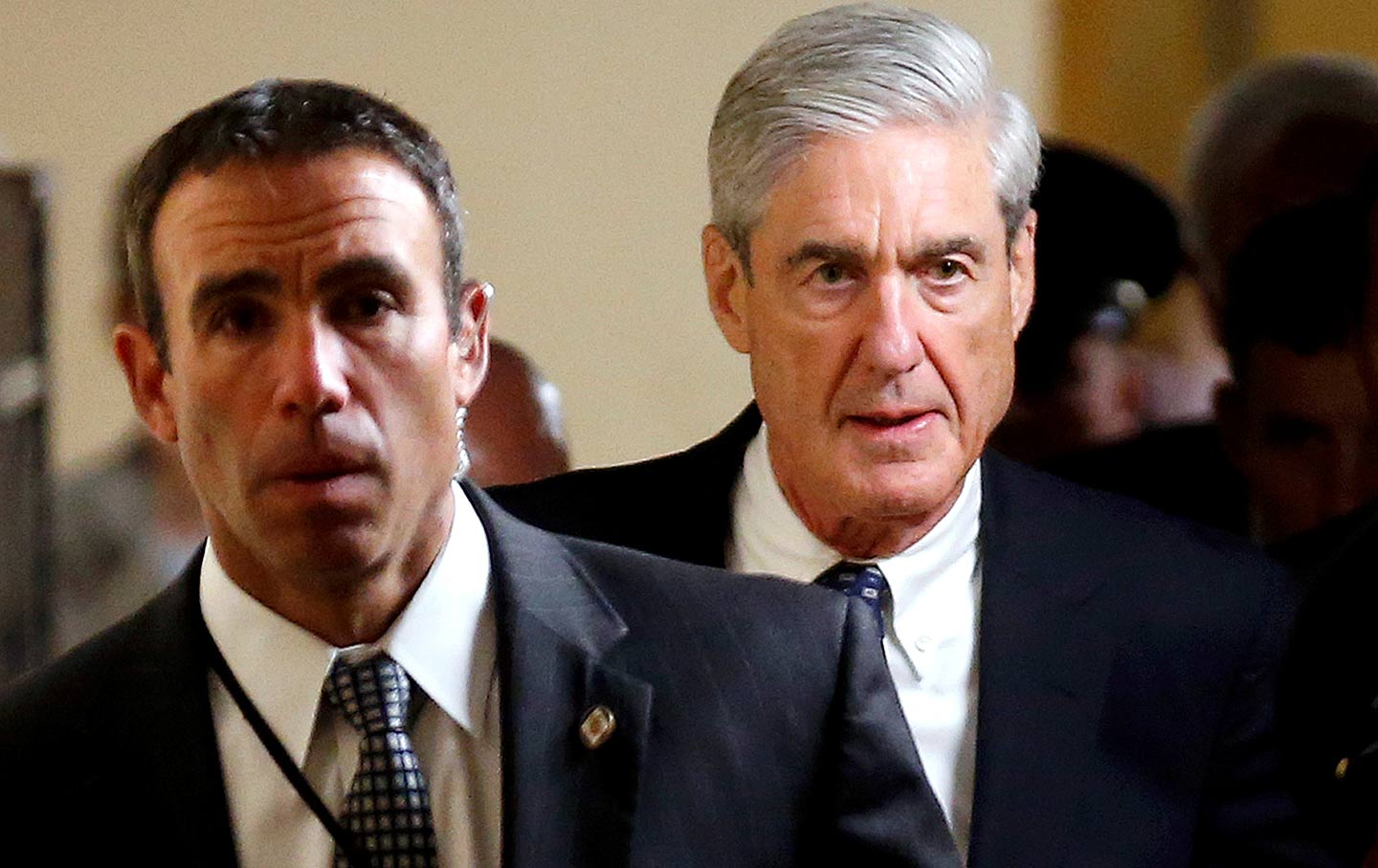 The conservative media’s ability to create, nurture, and sustain a dubious scandal until mainstream journalists feel pressured to cover it may be the most powerful weapon in contemporary American politics. It represents a significant structural advantage for Republicans. And now, as it’s being trained on intelligence and law-enforcement agencies—and special counsel Robert Mueller’s probe into Russia’s intervention in last year’s elections—it poses a serious threat to the separation of powers and the rule of law.

The Republican scandal machine dogged Barack Obama’s presidency. And, with an assist from Russia, former FBI director James Comey, and some sloppy journalism, it helped convince millions of Americans that supporting a venal, uninformed reality-TV host who’d bragged about sexual assault on a live mic was an acceptable choice in last year’s election, given the alternative.

Now, with that reality-TV host as president, embroiled in allegations of conspiracy and attempted obstruction of justice, the scandal machine is focused on distracting from and derailing the investigations into the relationship between Donald Trump and Russia, and discrediting the law-enforcement and intelligence officials who have conducted them.

The effort began in March, when House Intelligence Committee chair Devin Nunes (R-CA) tried to validate a bizarre tweet by Trump claiming that the Obama administration had wiretapped his campaign. Nunes seized upon the fact that in 2016, Obama’s national security adviser, Susan Rice, had “unmasked” the identities of campaign staffers who had been recorded making contacts with foreign operatives. The requests were routine—part of the job—but Nunes rushed to the White House, where he held a press conference to announce that he had briefed White House officials on the supposed “wiretapping.” It was later revealed that he had in fact gotten the information from the White House and was spinning it on Donald Trump’s behalf. This was the day after then–FBI Director James Comey confirmed in testimony before Congress that the bureau was investigating potential collusion between the Trump campaign and Russia.

Early coverage of Nunes’s stunt was largely dismissive. Multiple intelligence experts from both parties said that Rice’s actions were “normal and appropriate” and that there was “no evidence of wrongdoing.” It was clearly an effort to distract from Trump-Russia, and reporters treated it that way. But the conservative media continued to run with the story, keeping the unmasking “scandal” alive. Nunes also continued to beat that dead horse, “relaunching” his investigation in June, months after supposedly recusing himself from the Russia investigation. And every time he issued a statement or demanded new information from the Department of Justice, mainstream outlets duly covered the news, creating the impression that there were legitimate questions surrounding Rice’s actions.

Then the scandal machine turned to Robert Mueller and the team that he’d assembled. Painting the special counsel’s investigation as a partisan “witch hunt” was a tough task, given that Mueller is a Republican who was first appointed by George W. Bush, and had been a highly decorated Marine during the war against Vietnam. But in June, former speaker of the House Newt Gingrich tweeted that Republicans would be “delusional” to think that Mueller “is going to be fair” to Trump, and urged them to look at his team’s political donations. Sure enough, it turned out that four of Mueller’s prosecutors had donated a combined total of $6,100 to Hillary Clinton’s campaign—and had previously given to other Democrats—and this fact was relentlessly hammered by the conservative media for several months until Representative Sean Duffy (R-WI) went on CNN and claimed that Mueller was “bringing in Democrat campaign donors at a very high level.”

Fox News and other outlets then seized on a report that one of Mueller’s investigators, Andrew Weissmann, had attended Hillary Clinton’s election-night party in New York City. And a former aide to Mueller had later represented one of Hillary Clinton’s aides. The idea that veteran prosecutors can’t be trusted to do their jobs impartially if they’re Democrats is ludicrous on its face, and an insult to the profession, but it has nonetheless become Exhibit A in the case against Mueller. On the right, these tenuous connections became proof, in the words of Representative Matt Gaetz (R-FL), that “Donald Trump [was] being persecuted by Hillary Clinton’s fan club.”

In December, an FBI investigator was dismissed from the team when it was revealed that during the 2016 campaign he, like millions of other Americans, had called Trump “awful” and an “idiot,” and opined that Hillary Clinton “just has to win now. I’m not going to lie, I got a flash of nervousness yesterday about Trump.” That same month, one of Trump’s lawyers made the baseless claim that Mueller’s team had improperly obtained e-mails from the Trump transition team.

Six months ago, headlines lauded the prosecutorial and investigative chops of Mueller’s “dream team”—veteran law-enforcement officials who had exposed public corruption, prosecuted complex money-laundering cases, and taken down mobsters. Mainstream journalists have never given the claims that Mueller’s biased against Trump seriously, but the conservative press has hammered on the theme relentlessly, and neutral journalists have dutifully reported their accusations. Stories like “Trump’s lawyers looking for conflicts of interest among Mueller’s investigators” (Associated Press), “Trump Aides, Seeking Leverage, Investigate Mueller’s Investigators” (The New York Times), and “U.S. Risks ‘Coup’ If Mueller Investigation Continues, Republicans Warn”(Newsweek) may have offered important and necessary context to these claims, but the volume and prominence of these kinds of headlines for months on end have had an effect. In December, a poll found that 54 percent of the public, and 70 percent of Republicans, believed that Mueller had a conflict of interest. Another poll released this week found that almost half of those surveyed believe Trump is likely to be exonerated this year.

More recently, Republicans have attempted to make the FBI’s investigation into Trump-Russia a scandal unto itself. Their latest claim is that the dossier on Trump compiled by former British spy Christopher Steele formed the basis of the FBI’s original probe, and that this somehow taints the results. That claim was debunked by The New York Times, among other outlets, but the “controversy” persisted despite the fact that it would have been entirely appropriate for the FBI to investigate the Steele dossier. Even if Steele weren’t a highly respected intelligence operative with extensive contacts in Russia, law-enforcement agencies act on tips from all sorts of people all the time. The dossier would certainly have been enough to get a surveillance warrant from a Foreign Intelligence Surveillance Court; civil libertarians have long argued that the bar that the intelligence agencies need to clear in these secretive courts is significantly lower than what police face in a civilian court. No one, especially no one on the left, should uncritically accept the FBI’s claims, but there’s no reason to question the justifiability of its current Russia investigation.

Republicans also tried to smear deputy FBI director Andrew McCabe as a partisan hack for working on the Clinton investigation while his wife was running for a Virginia State Senate seat as a Democrat. The fact that his involvement with the probe began only three months after she lost her race hasn’t kept Trump and his allies from crying foul. Under persistent fire from the scandal machine, morale at the agency is reportedly near an all-time low.

The provenance of the Steele report has also been twisted into a talking point. Fusion GPS, the firm that hired Steele, is not a Democratic-leaning firm, as the conservative media would have you believe. Its core business is doing research for corporate clients. It was first retained to gather dirt on Trump during the GOP primaries by The Washington Free Beacon, a conservative website funded in part by Paul Singer, the billionaire hedge-fund operative and deep-pocketed Republican donor. It was only after Trump had clinched the nomination that associates of Hillary Clinton hired the firm to continue its opposition research.

Two of Fusion GPS’s co-founders, Glenn Simpson and Peter Fritsch, both former Wall Street Journal reporters, testified for hours before the Senate Intelligence Committee back in August. Last week, they went public with what they told investigators in The New York Times, accusing Republicans of selectively leaking details of their testimony “to media outlets on the far right. When Senator Dianne Feinstein released the transcript of their hearing this week, it became clear that, as Brian Beutler reported for Crooked, Republicans “spent their hours instead trying without much success to impeach Simpson’s credibility and paint him as a partisan. They were particularly interested in skewing the composition of Simpsons’ client base to make it seem tilted to Democrats (it isn’t), and in getting Simpson to testify that he had a financial interest in triggering an FBI investigation of the Trump campaign (he didn’t). Confronted with the allegation that the Trump campaign was complicit in a criminal plot to sabotage the Clinton campaign, Grassley’s representatives wanted to know why Simpson had the nerve to try to alert the public, through the media.”

All of this is being amplified by the unique feedback loop between Donald Trump and Fox News. Fox runs a dubious story and he makes it news by tweeting it out to the world. The Washington Post reported this week that the Department of Justice is now crafting policies to appeal to Trump’s TV viewing habits. “[DOJ] officials have tried to publicly tout their successes, hopeful that political allies and the president, a frequent television viewer, will take notice,” report Josh Dawsey and Matt Zapotosky. “They’ve done work that—in their view—should appeal to the president and his base, such as settling lawsuits with tea party groups, issuing guidance on religious liberty, cracking down on illegal immigration and rolling back various Obama-era guidances, including one advising courts to be wary of imposing heavy fines on those who can’t afford them.” Attorney General Jeff Sessions recently directed senior prosecutors to open investigations into Hillary Clinton’s e-mail servers.

The scandal machine gave us Donald Trump. It nurtured what began as a widely criticized campaign attack by Mitt Romney about Benghazi for four years, eventually turning it into a series of congressional investigations that revealed that Hillary Clinton used private e-mails for official business—like a number of Republicans before her and several Trump officials after the campaign ended. It turned the Clintons’ charity, the Clinton Foundation, into an avatar of corruption.

Now that same machine is threatening to undermine the to institutions vital to a functional democracy.