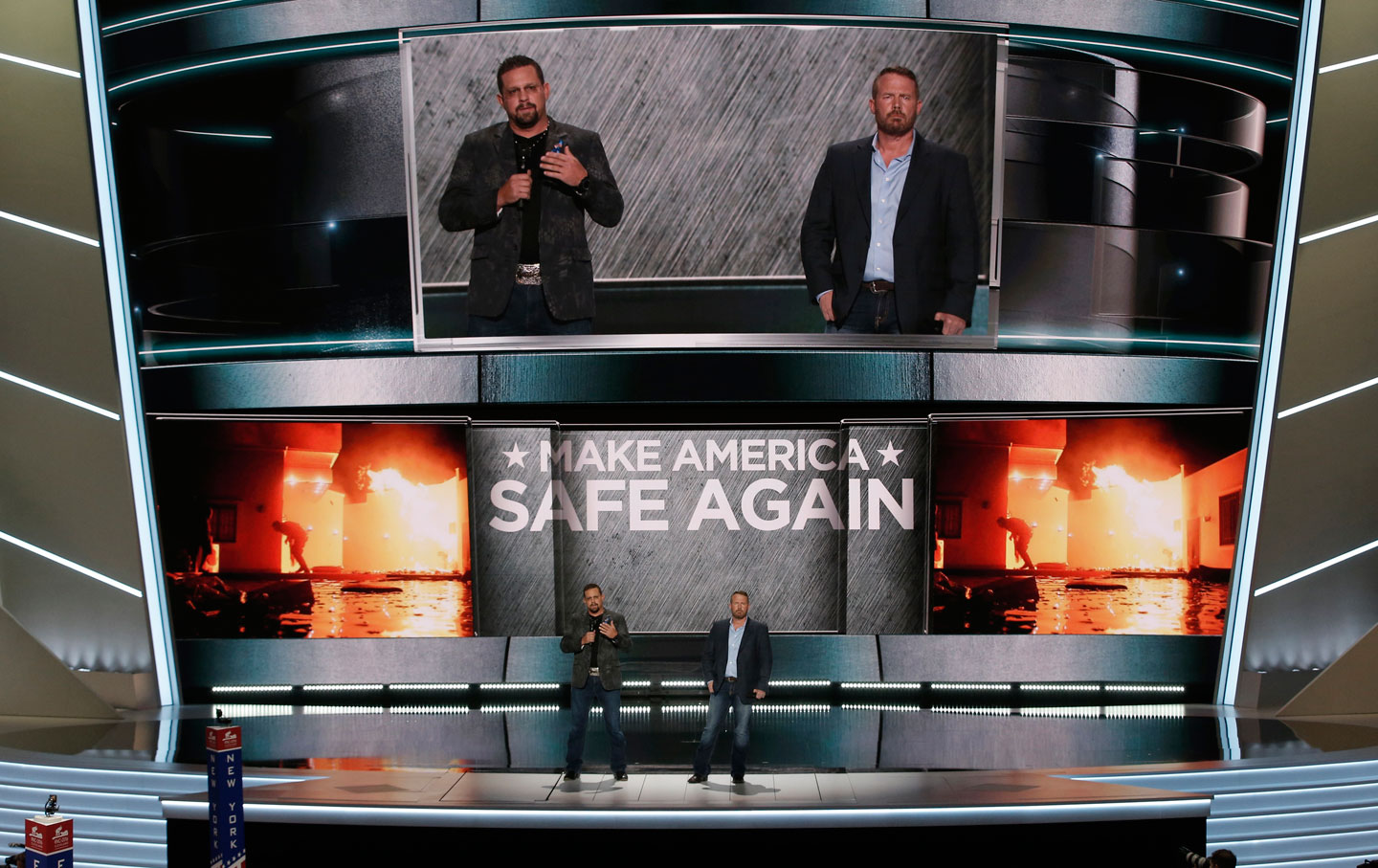 The soundtrack to opening night of the Republican National Convention was Queen and cheesy covers of the Turtles and the Rolling Stones, but convention organizers might as well have played a dirge. The program was stacked with three bleak hours of speeches from military members, law-enforcement officers, and elected officials, interlaced with a parade of people whose loved ones had been killed at the hands of undocumented immigrants and Islamic extremists. The clear message was that the safety of Americans (read white people) is directly threatened by the free movement of immigrants (namely Latinos), Muslims, and black people who assert their humanity.

The official theme of the evening was “Make America Safe Again,” but it could just as well have been, “Beware the Brown and Black People in Your Midst, They Are Coming to Kill You, and Don’t Forget, All Lives Matter.”

The RNC offered a peek into a worldview defined by strict, and false, binaries. “Radical Islamic terrorists” versus the selfless, cutthroat American killers who took them on in Benghazi. Mark Geist and John Teigen, members of the Benghazi security team, regaled the arena with a blow-by-blow account of their involvement in defending the embassy in 2012. “We heard State Department Security scream over the radio, ‘If you don’t get here now, we are all going to DIE!’ They were under siege. Stand-down orders be damned. We went,” Teigen said at the start of the lengthy recounting. The delegates in Quicken Loans Arena sat in silent rapture listening to the pair’s account, which stretched over at least 25 minutes. Theirs was only one of three segments of the evening devoted exclusively to Benghazi.

Later, Texas Representative Michael McCaul told the crowd about the looming security threats that now materialize with seeming regularity. “We are in the cross hairs,” he said. “Our own city streets have become the battleground.” McCaul listed cities where killers who were alleged to have connections with Muslim extremist groups had gone on killing rampages: Fort Hood, Chattanooga, San Bernardino, and Orlando.

Jamiel Shaw, Mary Ann Mendoza, and Sabine Durden spoke to the crowd’s deepest fears of undocumented immigrants. The group, billed as “immigration-reform advocates,” walked to the stage together. All three lost their sons in separate incidents that involved undocumented immigrants. Mendoza’s son Brandon Mendoza was killed by a drunk driver in Arizona. German immigrant Durden’s son Dominic Durden was killed by undocumented immigrant driving a pickup truck, “from Guatemala,” she took care to point out. “I call them illegal aliens,” Durden emphasized. Shaw’s son Jamiel Shaw, Jr. was 17 when Pedro Espinoza, then a 19-year-old and a member of the 18th Street Gang, mistook Shaw for a rival gang member and shot him dead. He’s since been sentenced to death for the murder.

Shaw, Mendoza, and Durden all shared their unspeakable pain with the Republican delegates. By then their grief was just another note in the funereal march of the evening. In their collective view the policy solution for the murders committed by an infinitesimal number of the nation’s undocumented immigrants was to build a wall, target 11 million undocumented immigrants, and shut down the immigration operation all together. Donald Trump would deliver on these promises, they said.

If only the preventative solution to these families’ tragedies were so simple. Unfortunately the reality is so much more complex, and not just because President Obama, evil incarnate himself in the eyes of many Republicans, has overseen the largest deportation program of any president, ever. The reality is reverse-engineering a policy solution out of these three families’ terrible tragedies seems to have led them only toward a blanket policy that labels all undocumented immigrants as criminal threats. Such an approach does not address crime itself; it merely succeeds in labeling immigrants as inherently criminal.

“It’s time we have an administration that cares more about Americans than illegals,” Mendoza said. “A vote for Hillary is putting all of our children’s lives at risk. It’s time for Donald Trump.” Mendoza also forgets to account for the many undocumented immigrants who have lived in the United States for decades, who have built businesses and raised families, including US-born children, in this country. It may strain the imagination of many, but the reality is there are many undocumented immigrants who are thoroughly “American” in every way except for the passport they hold.

By the time Milwaukee Sheriff David A. Clarke Jr. took the stage to a rousing standing ovation—his remarks criticizing the “anti-cop sentiment from this hateful ideology called Black Lives Matter” on CNN had clearly gotten around—it was time for someone to take on the last and final bogeyman in America: black people. Clarke, who is black, got straight to the point when he got to the mic. “Ladies and gentlemen, let me make something very clear. Blue lives matter!” The crowd erupted in cheers that gave way to chants of “USA! USA! USA!” Clarke mourned the weekend killings of three police officers in Baton Rouge and last week’s sniper shootings which left five Dallas police officers dead, but celebrated the “good news” that Lieutenant Brian Rice, the highest ranking officer involved in the Freddie Gray case, had been acquitted on all charges after a “malicious prosecution” by Baltimore State’s Attorney Marilyn Mosby.

El Paso County Commissioner and Colorado candidate for Senate Darryl Glenn played a similar role. Glenn, who is also black, said, “Frankly, somebody with a tan needs to say this: All lives matter.” None of the white speakers ever uttered that phrase. Perhaps knowing the cynical vacuousness of the words, they left that dirty work to Trump’s black surrogates.

Police officers and members of the armed forces were cheered as more than national heroes. They were treated as a besieged class. Throughout the night the crowd cheered for cops and members of the armed forces with a wild desperation. It was if convention goers felt they had to compensate the very people armed with the legal authority to kill civilians for some perceived lack of power they had in the outside world. “Cops who risk their lives to keep us safe,” as one speaker described them, seemed to stand on the side of unalloyed good, and those who dare demand more of the people charged with keeping all civilians safe, stand in opposition to them.

At the Republican Convention, this is what it boiled down to. Police officers, white people, they are the infallible. Anyone who’s been victimized by a brown-skinned mass shooter or undocumented immigrant—they are the sympathetic. Everyone else—that is, black people, Muslims, or those who are confused for them, and immigrants—is suspect.

There is no in-between land, there is no both/and. There is only good or bad, either or or, black or white. So it is at the 2016 Republican National Convention. But not, rest assured, in the real world.