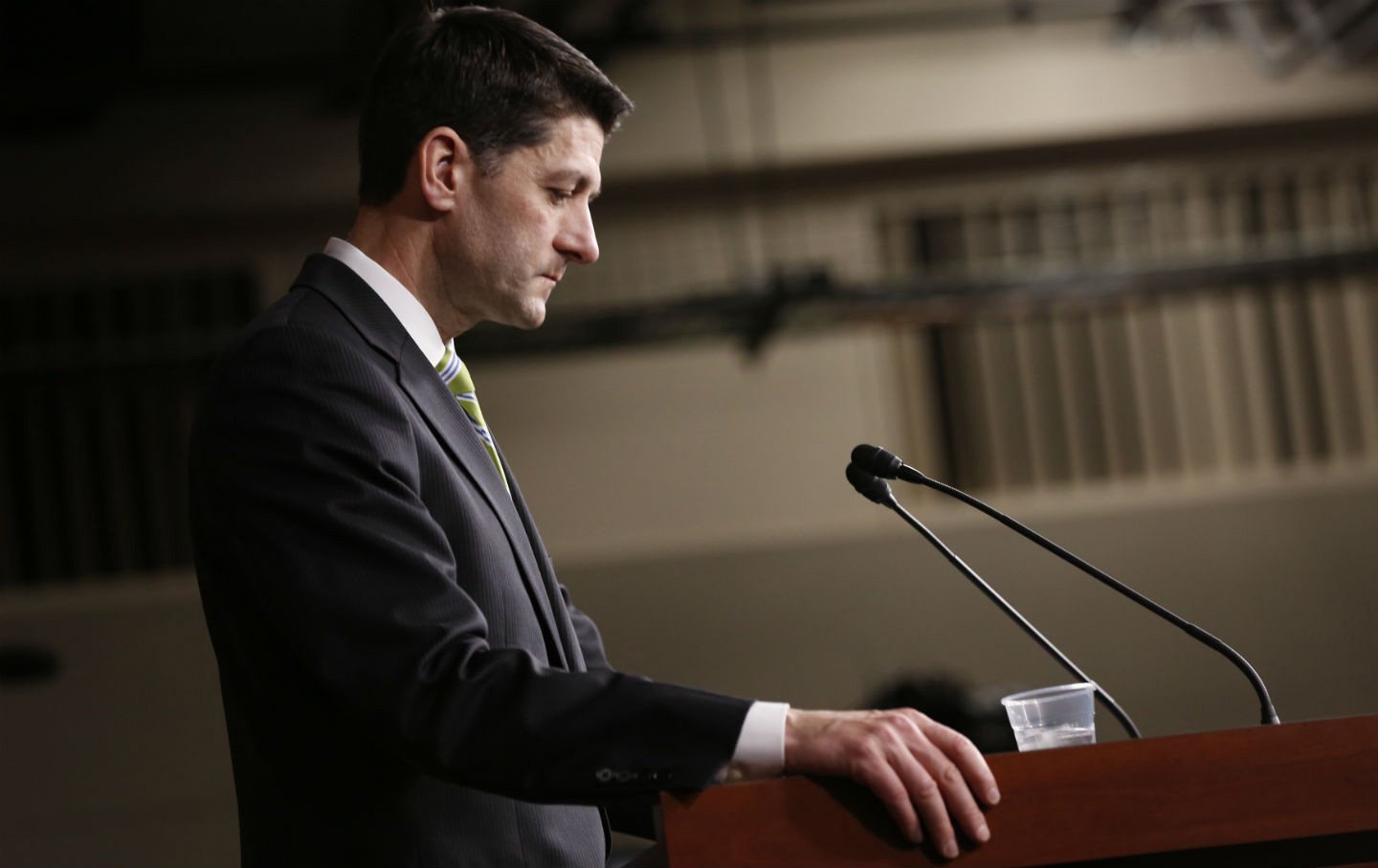 When the history of the fledgling, fumbling Trump presidency is written, the past week will go down as either the end of the beginning, or the beginning of the end. Trump’s disastrous week began with FBI director James Comey confirming that his campaign is under investigation for possible “coordination” with Russian officials to sabotage Hillary Clinton’s presidential candidacy. It ended with the ominous slam of a door Friday night: House Speaker Paul Ryan pulling the monstrous American Health Care Act because he didn’t have the votes to pass it, admitting that the GOP’s seven-year crusade to repeal the Affordable Care Act is over.

A president who campaigned on the promise that “we’re going to win so much, you’re gonna be sick of winning” has suffered a disabling string of losses in his first two months. He had to fire his National Security Advisor, Mike Flynn, for lying about conversations with Russian Ambassador Sergey Kislyak; Attorney General Jeff Sessions, also discovered dissembling about his Russian ties, had to recuse himself from Comey’s investigation into Trump campaign coordination with Russia. Federal judges have repeatedly blocked his Muslim ban. But nothing has been as publicly humiliating as the betrayal of a core campaign promise: That Trump and Republicans would “immediately,” in his words, “repeal and replace” the nightmare of Obamacare. Influential conservative writer Philip Klein called Trump and Ryan’s move to pull the bill from consideration “the biggest broken promise in political history.”

Although it only lasted 17 legislative days – a ridiculous timeframe for a major health system overhaul – it was enough time to show that Trump is an incompetent poseur, hardly the master negotiator he claims to be, and that Paul Ryan is a shallow opportunist who pretends to be a policy wonk and sharp political leader, but is neither.

The bill was a tax cut for the rich disguised as healthcare reform, financed heavily by cruel cuts to Medicare. Most people would have paid more in premiums, and the plan would have insured 24 million fewer Americans over 10 years. As I’ve written before, it couldn’t have hurt Trump’s voter base – older white working class red-state residents – more had it been expressly designed to do so.

Clearly an unprecedented progressive mobilization played a huge role in the bill’s failure. Republican lawmakers reported receiving thousands of phone calls on the AHCA, all but a handful against it. That stiffened the spines of House Democrats; by staying completely united, Democrats exposed the deep fissures in the GOP.

Folks on the right and left want to give the center-right “Tuesday group” – so-called GOP moderates who are in fact conventional conservatives; the rest of their party has moved far to the right—credit or blame for the bill’s defeat. They deserve little credit. Sure, they blocked the horrendous bill, but only after years of empowering the Freedom Caucus as well as Speaker Ryan, letting their party turn into a roadblock to democracy. They voted for ACA repeal again and again, encouraging the fantasy that Republicans had a unified approach to gutting Obamacare. But they did not.

That they did not is remarkable, but not surprising. The Republican Party is too fractured to agree on a federal approach to healthcare reform. So-called moderates at least see a role for the government in providing healthcare, using mostly market solutions. The Freedom Caucus wants to take a hammer to government programs, including the ACA, believing the market can and will provide. For six years, the GOP caucus was united in saying “no” to Obama, but never tried to get to “yes.” As Harold Pollack writes in Politico: “There was a conspicuous smallness to this AHCA effort, a puzzling shoddiness given the human and political stakes…. For all their endless warnings about how Obama’s signature health law was hurting American families, driving up costs and putting us on the path toward socialism, it turns out they didn’t care enough to put in the work.”

Indeed, the bill was an abomination, a Frankenstein monster stitched together in secrecy by Paul Ryan and his minions. But Republicans are likely to fail again when they approach tax reform and infrastructure. Which forces us to face: The modern Republican Party is not a governing party. It is a collection of grievances, a noisy minority of the country held together by anger, frustration, anti-government ire, and for some, a bonding epoxy of racism. The Freedom Caucus, which came in during the anti-Obama Tea Party wave, represents a permanent resistance movement; they are guerrillas, subversives; they don’t want to be part of government, they want to blow it up. Many of them, and their voters, marinated in Obama-hatred for eight years – and party leaders coddled them. The fateful decision by Senate Majority Leader Mitch McConnell, as well as former Speaker John Boehner, to block everything Obama did for two terms kept the party free of the messy job of governing. Now that they control the House, the Senate, and the White House, they have no clue how to govern.

Democrats should not help them. Americans need to see how the modern GOP’s solution-free, grievance fueled anti-Obama politics gave rise to Trump – and how dangerous Trump and his party is to the country.