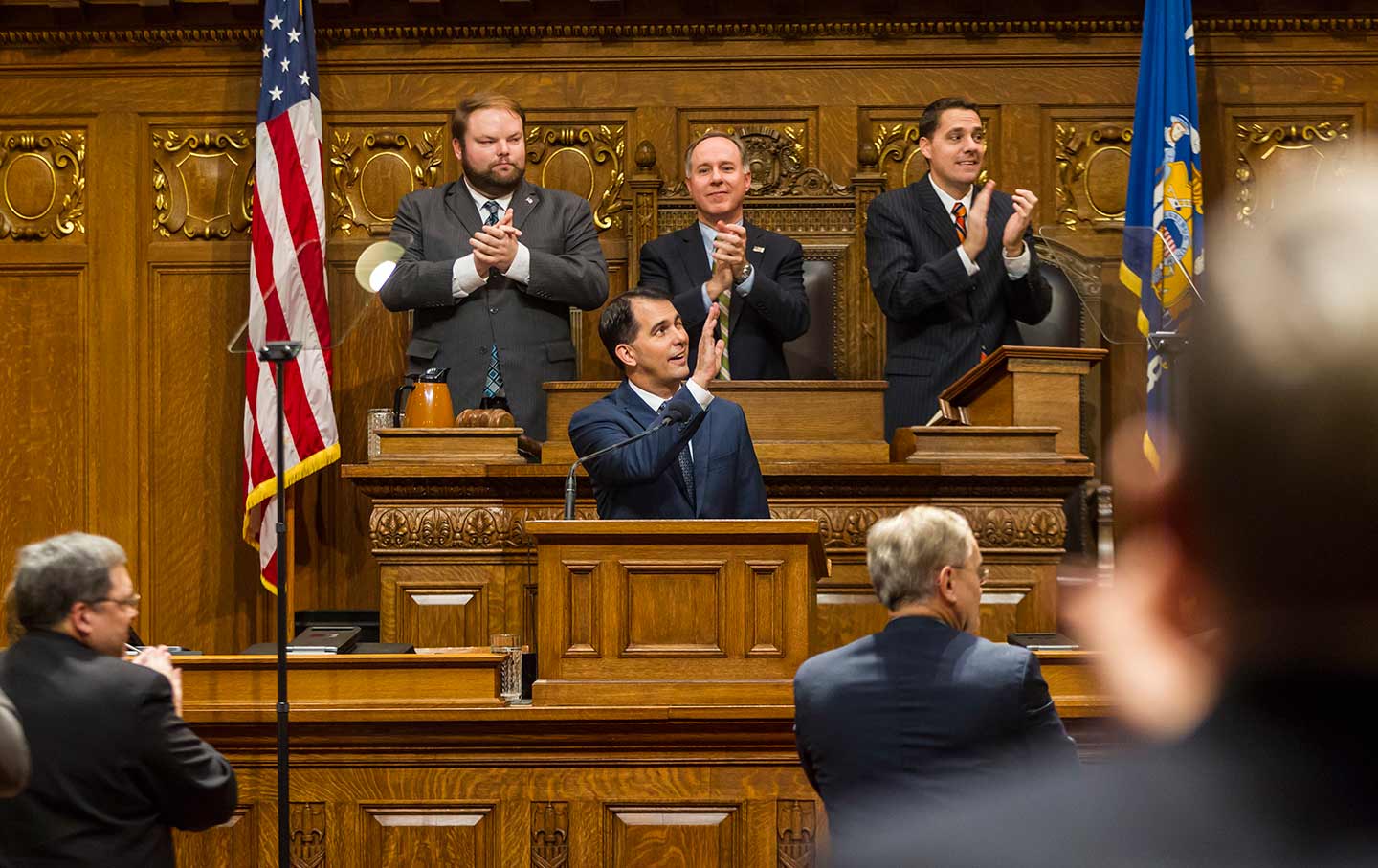 Stephen Coss, the marvelous historian who writes from Madison, Wisconsin, about the founding moments of the American experiment, responded to the dark machinations of Wisconsin Republicans—who have used a lame-duck session of the state legislature to disempower the Democrats elected on November 6 to serve as governor and attorney general—with a line from the greatest Republican.

“To those who claim omnipotence for the Legislature, and who in the plenitude of their assumed powers, are disposed to disregard the Constitution, law, good faith, moral right, and everything else, I have not a word to say,” Abraham Lincoln observed during his time as a young Illinois state legislator.

Well played, Mr. Coss. It is important to remind people that the Republicans who now abuse their powers in an effort to thwart the will of the people are at odds with their party’s historic values. Defeated Wisconsin Governor Scott Walker and his partisan allies, Assembly Speaker Robin Vos and Senate majority leader Scott Fitzgerald, have engaged in a crude, winner-take-all politics with their #WIGOPPowerGrab—a choice which rejects the founding premise of a party that was initiated 164 years ago in Ripon, Wisconsin, by a circle of radicals who objected to the awful politics of compromise and concession that permitted the spread of slavery.

The first Republicans, and their worthy successors, well understood the frustrations of politics. They won and they lost. When they won, they used power to pursue an idealistic course of action that transformed the nation for the better. When they lost, they ceded power to political rivals and regrouped for the next fight. This is how the party progressed.

But the Republican Party has stopped progressing. Indeed, it has regressed so thoroughly that it is now anathema to its founding self.

Today’s Republican Party—in Wisconsin, Michigan, and other states where lame-duck legislative sessions have been used to undermine the authority of duly elected Democratic governors, attorneys general, and secretaries of state—is coming to embody what the first Republicans opposed in a national platform that decried “the spurious and pretended legislative, judicial, and executive officers” who in the 1850s “usurped authority” and enacted “tyrannical and unconstitutional laws.”

The Republican Party is no longer “the party of Lincoln.”

Nor is this the party of those who, well into the 20th century, sought to maintain the faith of the founders of a Republican experiment that started out by objecting to abuses of power—with the grand declaration of 1856 that “the highwayman’s plea, that ‘might makes right’…would bring shame and dishonor upon any Government or people that gave it their sanction.”

The Republican Party has become the party that Republican President Dwight Eisenhower feared.

Speaking a century after the Grand Old Party waged its first presidential campaign, the president who sought to forge a modern Republican Party in the mid-20th century, celebrated “a certain kind of principle, or doctrine, or belief to fall back on” and warned that “If a political party does not have its foundation in the determination to advance a cause that is right and that is moral, then it is not a political party; it is merely a conspiracy to seize power.”

“A conspiracy to seize power” is an agonizingly apt description of the lie unto itself that Scott Walker and his cronies have made of the Republican Party.