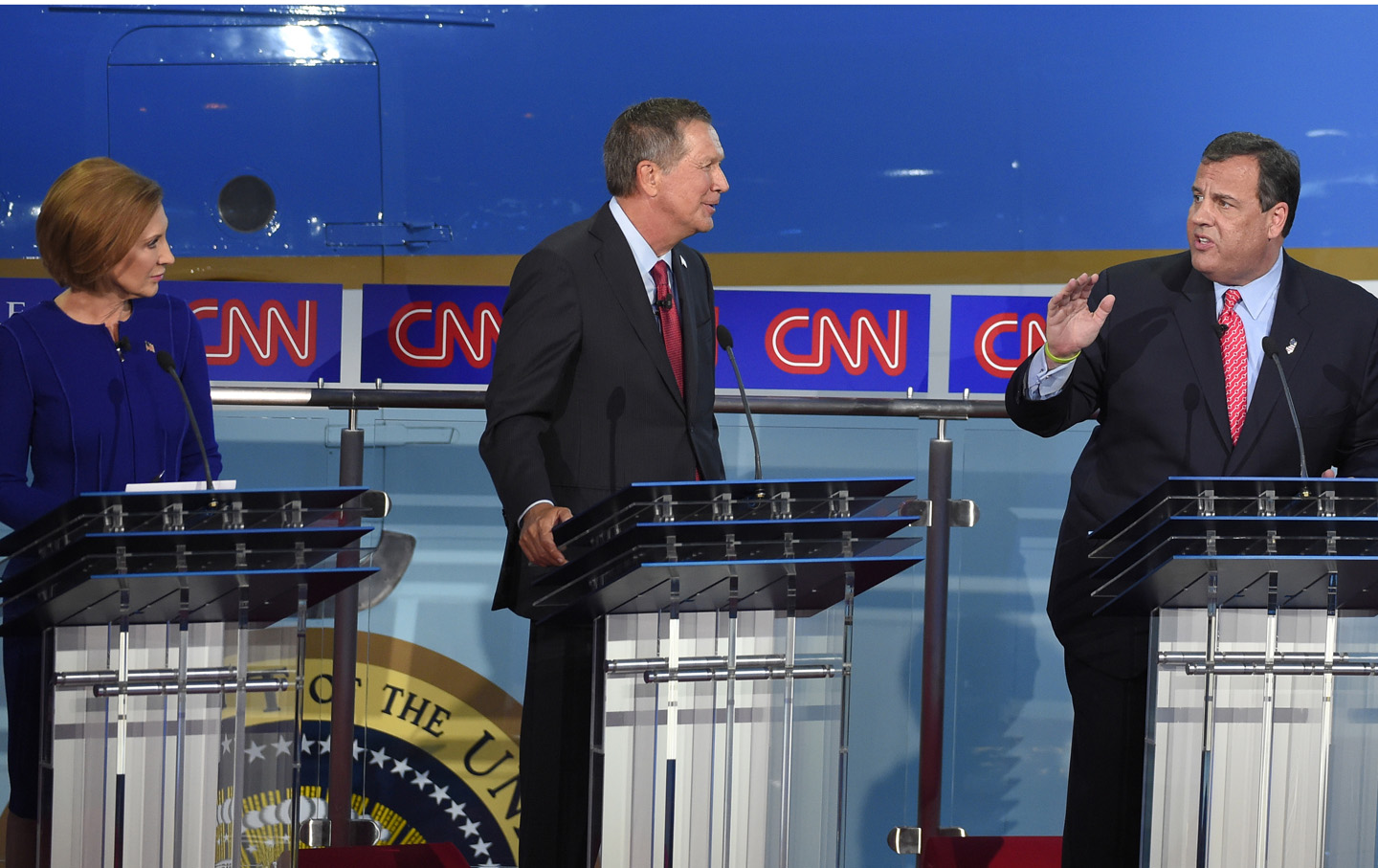 Simi Valley—As a result of President Obama’s success in getting the Iranian nuclear accord past a well-coordinated and obscenely well-funded American-Israeli effort to derail it, a spate of stories have appeared over the last week suggesting that the Israel lobby, and perhaps American neoconservatism generally, may be now something of a spent force in Republican politics. Yet anyone watching the second Republican primary debate last evening would be quickly disabused of such a notion. If the candidates’ positions on foreign policy were anything to go by, the neocon outlook—which is in essence a frightened, xenophobic, reflexive militarism—continues to have a stranglehold on a Grand Old Party, which cannot seem to shake some Very Bad Ideas.

It was clear from the outset that nearly all of the candidates who made their way to the Ronald Reagan Presidential Library last night had, at a minimum, two objectives: first, to pay sufficient fealty to the memory of the “the Gipper” and, second, try to derail the Donald Trump juggernaut. The one exception, naturally, was Trump himself, who did manage to pay due respect to the late president’s memory, all the while finding ample time, as he always does, to sing a song of himself.

The debate was a two-part affair. Governor Bobby Jindal, Senator Lindsey Graham, former senator Rick Santorum, and former governor George Pataki were featured on the undercard. Most notably, Graham whipped up his usual stew of rabid Islamophobia and unhinged militarism, topped off with a dollop of lugubrious anecdotes about what, in all fairness, must have been a most unenviable backwoods childhood. His vision of the world America faces is unremittingly hostile. He proposes to send 10,000 American troops to Iraq in order to “destroy” the Islamic State. He would also send ground forces into Syria, because, according to Graham, if the United States doesn’t topple Assad (the secular dictator who happens to be fighting the very same Islamic radicals the United States itself is currently bombing), the Syrian civil war could soon pose a direct threat to what Republicans gratingly and unceasingly call “the Homeland.” According to Graham, “if you are not ready to do these things, you are not ready to be Commander-in-Chief.” QED.

The main event came quickly enough, and on the foreign-policy side of the ledger it was, for those of us appalled by the incessant and reckless militarism that has become the hallmark of American foreign policy over the past quarter-century, a largely dispiriting affair. Of the 11 candidates who made it to prime time, only Senator Rand Paul made the feeblest attempt to defy the GOP’s orthodox militarism.

Before the campaign began in earnest this summer, Paul was seen by many, including Time magazine, which put him on its cover in October 2014, to be a top contender for the nomination. He is now routinely mocked by Trump for his low poll numbers. Paul’s sinking poll numbers are interesting for what they say about the current disposition of Republican primary voters. According to several long-time Republican Party watchers I spoke to recently, Rand is finding far less success than his father had at similar points in the 2008 and 2012 campaigns, not simply because he is a lackluster and disinterested candidate, but because his brand of foreign policy realism now holds little purchase among Republican primary voters who are obsessing over the degradations of the Islamic State. It seems Paul’s problem is that in the current environment of ISIS hysteria, the more he touts his opposition to the Iraq, Libya and Syrian debacles, the deeper he sinks into oblivion.

On the evidence of last night’s dog and pony show, the other 14 candidates weren’t about to make the same mistake. Taking their cues from frontrunner Trump’s campaign, they all seemed to believe that the key to success during the current cycle is to formulate a message that marries jingoism to militarism.

And so, last night Graham, Trump and Jeb Bush each vowed to “rebuild our military.” Trump reminded the assembled that he “is a very militaristic person”; Bobby Jindal proclaimed America to be “the greatest country in the world”; while John Kasich echoed President Reagan’s assertion that we are “a great shining city on a hill.” But the triumphalism was coupled with warnings that, thanks to President Obama, all could be lost—and soon. Trump told the crowd, “We are not respected now,” while Bush warned that we are facing “insecurity the likes of which we couldn’t have imagined 6 years ago.”

Meanwhile, the principle interlocutor, CNN’s Jake Tapper, didn’t exactly cover himself in glory. In lieu of asking substantive questions on specific foreign policy challenges facing the nation, the audience was subjected to what were obviously pre-cooked set pieces aimed at producing fireworks between certain candidates. So, instead of Tapper asking Marco Rubio (who not once, but twice, referred to Russian President Vladimir Putin as “a gangster”) if he thought Russia had any legitimate national security interests along its borders (a position, held by, among others, Henry Kissinger), Tapper instead posed a leading question over Putin’s alleged imperial designs in Syria.

The responses to these half-baked geopolitical pop quizzes were nothing short of vacuous. Trump opined that Putin is in Ukraine and Syria because he has “zero respect for Obama.” Carly Fiorina flatly declared that she wouldn’t even bother talking to Putin. And Jindal’s considered opinion was that Russian intervention in Ukraine stems from the fact that we have a “weak, unqualified Commander-in-Chief.”

Still worse, anyone who displayed even a scintilla of common sense felt obliged to backtrack immediately, lest he leave his pro-war bona fides laid open to question. And so, while Ben Carson noted that he was against the 2003 Iraq War, he quickly reminded everyone that we now face an “existential threat” from ISIS jihadists. Trump also said he was against the Iraq debacle, but immediately went on to brag about how “militaristic” he is. Even the most sensible of the lot, Ohio Governor John Kasich, noted that America needs to work with its allies, yet he then went on to denounce the Iran deal which, as he surely knows, is itself a product of America’s cooperation with its allies.

And then there’s Chris Christie. Christie’s performance—his opportunistic use of 9/11 makes Rudy Giuliani’s incessant use of it in 2008 look measured by comparison—would be beneath contempt if it weren’t so laughable. Hovering around 1 or 2 percent in the polls, he tried, as he did in the first Republican debate in Cleveland, to insinuate some cosmic significance to his claim that he was appointed US Attorney for the District of New Jersey by President George W. Bush on, wait for it, September 10, 2001. But Christie was actually appointed in December 2001, a fact he serially neglects to mention. He then went on to present himself as a front line prosecutor in the domestic “War on Terror.” But as a number of investigative journalists have pointed out, the case on which Christie rests his terror-fighting bona fides, the Fort Dix Five, is hardly something that commends him to the highest office in the land.

In any event, what last night’s ridiculous and at times rather alarming GOP debate showed is a party that remains in thrall to a bankrupt neoconservative ideology, willfully deaf to reason, blind to reality and unable and unwilling to learn from its multitude of past mistakes.