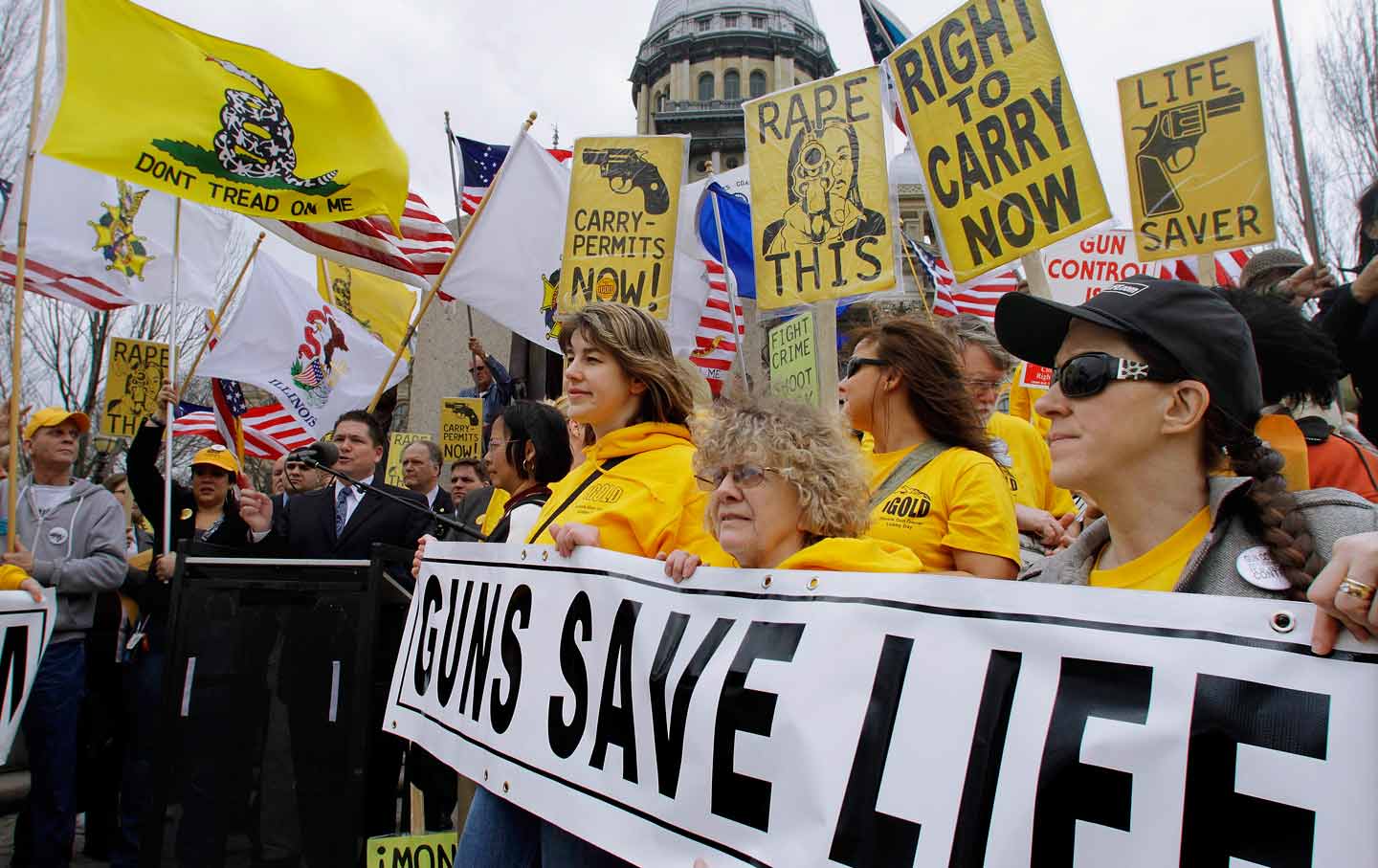 Members of the pro-gun group Guns Save Life rally at the Illinois State Capitol in 2012. (AP Photo / Seth Perlman, File)

I hate to pick on Carly Fiorina, since she’s dropping in GOP presidential polls, but she’s the most avid purveyor of falsehoods in the 2016 Republican field next to Donald Trump. She spewed some whoppers Thursday on MSNBC’s Morning Joe. They’re worth examining because they show the way GOP cynics, most of whom know better, are exploiting anti-government hysteria on the right as they close their ears to overwhelming public demand for tougher gun laws. (Updated at 5:05 PM: At the time of writing, evidence hadn’t yet emerged that Syed Rizwan Farook and his wife Tashfeen Malik had traveled to the Middle East and been in contact with Islamic extremists on the government’s watch list. Nonetheless, that information doesn’t invalidate the argument that individuals shouldn’t be able to buy the kind of assault weapons, plus thousands of rounds of ammunition, the couple bought and stockpiled.)

The morning after 14 people were killed and 17 wounded at a holiday party for county employees in San Bernardino, California, Fiorina echoed most of the GOP field by arguing that she doesn’t want more gun control largely because she doesn’t trust government. “I actually think it’s ideology, not common sense, that causes the left wing every time in a knee-jerk reaction to say, ‘The answer here is more laws,’ when we’re not enforcing the laws we have,” she told the hosts.

When Joe Scarborough asked why she opposed a ban on gun sales to people who are on the government’s terrorist-watch no-fly list, she answered, “If I had utter faith in the competence of government, I might agree with that. But do you? I don’t.” She shared the odd fact that her best friend’s husband “was on the watch list for years” and “he also happened to be a gun owner.” Interesting.

It would seem to me that if you don’t trust the government to compile an accurate no-fly list of terror suspects, you should be against having a no-fly list, too. But Fiorina didn’t dare oppose that. So let’s get this straight: She’s OK with some individuals’, often for murky (and mistaken) reasons, being prevented from getting on a plane to visit their families or travel for business—but she’ll protect their right to buy a Bushmaster?

It’s crazy, but we have to face the facts: Our prolonged gun control stalemate reflects the far-right’s deep distrust of democracy, and it’s worsened by a party that panders to that paranoid base. Increasingly this right-wing fringe believes it’s going to need its guns to overthrow an illegitimate government—especially the one run by gun-grabbing Barack Obama. They’ve been shrieking that Obama is coming for their guns since before he became president—the NRA mailed its devotees a 10-point guide to the way Obama would eviscerate the Second Amendment in 2008. He did anything but; in his first year he signed a law overturning a ban on loaded and concealed guns in national parks in 2009. He left the issue of gun control alone, only talking about it three times during the 2012 campaign.

The passion for guns has political and cultural roots in our origin as a nation that laudably threw off tyranny—while shamefully killing the people who lived here first, as “settlers” claimed the “frontier.” The continued mania for guns to ward off tyranny, even after we’d overthrown our oppressors and settled the country by any means necessary, is a holdover from the Civil War, when the South violently seceded to protect slavery. There remains a suspicion, in the red states of the South and mountain West, but even in some pockets of blue states, that the elected government isn’t entirely legitimate, and they may have to rely on “Second Amendment remedies,” in Nevada Senate candidate Sharron Angle’s unforgettable phrase, to overthrow it.

Unbelievably, the conservative majority on the John Roberts Supreme Court went so far as to redefine the Second Amendment to block what had been established efforts by local, state, and federal elected officials to place restrictions on individual gun ownership, in its infamous 2008 Heller decision.

A similar distrust of democracy can be seen in efforts to roll back voting rights in Republican states, in the wake of the unprecedented black turnout that elected Obama (which the Roberts Court also abetted when it gutted the Voting Rights Act in 2013.). Too many Republicans fear increasing numbers of non-white and lower-income voters, and freely avail themselves of measures that deny them the vote. They seem to have only a tenuous respect for our system of government, with an attitude that says: Sure, we’ll run for office, we’ll raise money, we’ll campaign, and we’ll vote—but we’ll control who gets to vote, and we’ll make sure we have a lot of guns around, in case we still don’t like the results.

Last Friday, in the wake of the terror at the Colorado Springs Planned Parenthood clinic, I saw friends on social media say it was time to become single-issue reproductive-rights voters. I understood that urge. Then as the carnage unfolded on Wednesday, some people suggested we should become reproductive-rights and gun-control voters. I understood that too.

But the protection of unfettered gun rights is connected to all of our nation’s festering political, economic, and cultural problems. This suspicion of government runs so deep, especially but not exclusively in red America, that it’s hard to make progress on issues of income inequality, racial justice, college affordability—anything that would require concerted government action. Let’s face it: A small but well-organized minority of Americans think it’s worth this continuing carnage—20 dead kindergarteners in Sandy Hook; 14 bullet-riddled county employees in San Bernardino; a police officer, an Iraq vet and a young mother dead in Colorado Springs—to protect their unfettered access to guns they believe will guard them against government tyranny.

Meanwhile, a large but poorly organized majority of Americans support sensible gun-control laws. But they don’t get what they want, because one of our two major parties panders to its lunatic fringe.