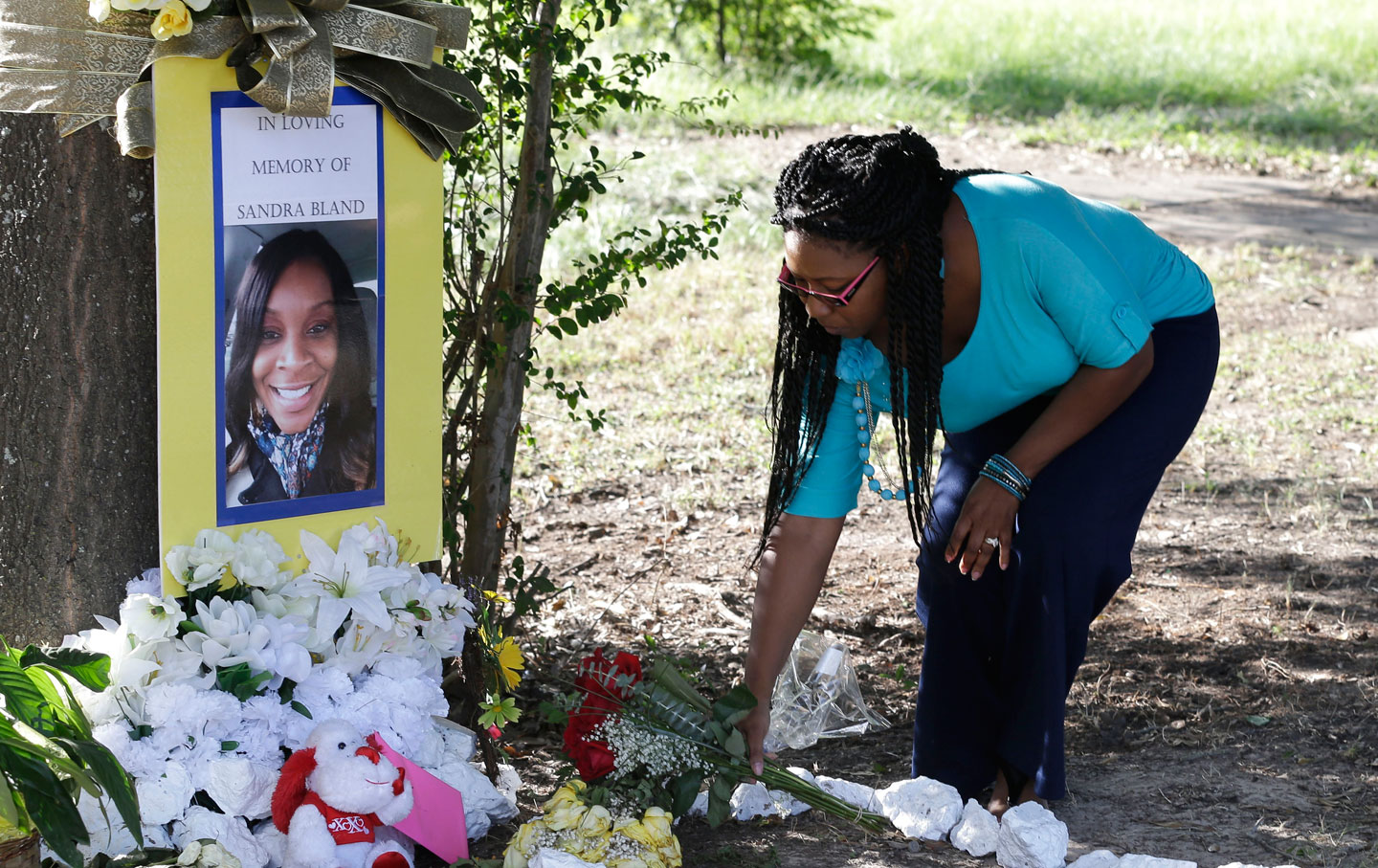 EDITOR’S NOTE: A grand jury on December 21 declined to indict anyone in connection with Sandra Bland’s death at the Waller County jail; the decision pertains only to the actions of staff at the jail where Bland was found dead. Special prosecutor Darrell Jordan stressed in announcing the decision that the “case is still open” and grand jurors will reconvene in January to consider further aspects of it. It remains to be seen if charges will be brought against State Trooper Brian Encinia, who arrested Bland. The hearing discussed in Debbie Nathan’s report below involves the civil suit that Sandra Bland’s family has brought against several officials involved in her arrest and imprisonment.

Sandra Bland’s mother and sisters were in federal court in Houston on Thursday. The occasion was a hearing for their lawsuit against multiple defendants: the Texas highway trooper who improperly arrested Bland in July, the county that jailed her, and the jailers who Bland’s family say should have prevented her from dying while behind bars. The courtroom was packed with Bland’s family, her Sigma Gamma Rho sorority sisters, black civil-rights activists, unaffiliated but concerned community members, and the media.

Among new developments in the case were revelations from the lawyers of those being sued that they’ve seen evidence, lifted from Bland’s cellphone texts, that she might have been getting counseling for mental-health issues. The defendants say that Bland died while in custody as a result of a suicide that the jail could not have prevented.

The judge set the trial date for January, 2017, over a year from now. It will be a long time before legal light is definitively shed on the question that graces everything from hashtags to T-shirts: What happened to Sandra Bland?

But if you follow the money in Texas, it’s clear that one big reason people like Bland get stopped on the roads is because the state—and its counties and munipalities—are grubbing for dollars and cents.

"Courts in Texas are huge revenue generators and court costs are definitely a motivation for pulling people over."

Bland was detained ostensibly because she failed to signal a lane change in Prairie View, a small, college town in rural Waller County, near Houston. It’s very common for young people to get pulled over there. As in Ferguson, Missouri, stopping drivers and ticketing them is how Waller County makes a lot of money.

Attorney Emily Gerrick has studied the phenomenon. She is with the Austin-based Texas Fair Defense Project. It’s a nonprofit working to improve the state’s public-defender system and challenge policies that jail poor people because they can’t afford bail-bond fees and post-conviction fines and costs.

Those costs are legion and staggering. Texas has no state income tax, and money for social services must come from somewhere. Gouging people with traffic tickets and criminal convictions is an easy way for the state, counties, and municipalities to collect lots of money.

The worst place in Waller County to be driving is probably where Bland was stopped–the little town of Prairie View.

They do it through a byzantine schedule of fees. The state keeps most of the money, but counties and cities retain a percentage. There’s a $25 “records-management” fee, for instance. A $15 “judicial fund” fee. Fifteen dollars added to each bail-bond payment. The list goes on, with scores of charges. As a former Waller County Justice of the Peace described it, a trivial infraction can rack up charges totaling as much as $500.

The most arbitrary pinch comes from what’s known in Texas as the “Consolidated Court Cost.” Added to a fine, it’s a fixed amount imposed upon everyone who pleads guilty or is convicted of any offense, no matter how small. The fee is $40 for a non-jailable misdemeanor like a traffic ticket, $83 for a higher-level misdemeanor, and $133 for a felony.

Counties are allowed to keep 10 percent of the Consolidated Court Cost fee for their general funds. The state divvies the rest among a number of programs. One is an agency that provides services for people with brain and spinal cord injuries. Another is something called “Emergency Radio Infrastructure.” Funds have been used for surveillance cameras on the Texas-Mexico border and GPS monitors on school children to prevent truancy. One program did voter identification checks under the guise of preventing voter fraud.

The Texas Fair Defense Project calls the Consolidated Court Cost mostly unconstitutional because it pays for efforts having nothing to do with the violations committed by people who have to pay the fee. Meanwhile, Gerrick says, there’s a huge incentive among law enforcers for hassling people like Sandra Bland. “Courts in Texas are huge revenue generators and court costs are definitely a motivation for pulling people over.”

Gerrick has examined the budget of Waller County, where Bland was detained, and found that its Justice of the Peace courts, which handle class C misdemeanors—the least serious crimes, such as the traffic violation Bland was stopped for—collected almost $1.3 million in fines and costs in 2013. The county turned over a third of that money to the state and kept over $800,000—about 5 percent of its general fund. Justice of the Peace Courts in Waller are “a big money maker,” Gerrick says.

Prairie View A&M University is a historically black institution founded just after the Civil War. It sits smack in Texas’s historically Deep South region, where plantations were an economic mainstay during the antebellum, along with slave labor used to run them. Waller County lynched an extraordinarily high number of African Americans during Jim Crow. Prairie View A&M is where Bland attended college, and where she was returning this summer to take a job when she was arrested just outside of the campus.

She was pulled over by a state trooper, but Prairie View A&M students are just as often stopped by authorities from a plethora of other agencies: cops from the city of Prairie View; deputies from the county sheriff’s department; constables; even campus police. Everyone is on the take for those tickets, fines, fees, and Consolidated Court Costs.

Even Prairie View A&M, the historically black institution, gets a piece of the action.

Back in 1997, Royce West, an African-American state senator representing Dallas, co-authored legislation creating the Texas Juvenile Crime Prevention Center, a special school at Prairie View A&M. The center is dedicated to researching and decreasing youth delinquency. Thanks to lobbying by West, it is almost totally funded from Consolidated Court Costs imposed on everyone in Texas who’s judged convicted of any crime. Thanks to the Court Cost scheme, Prairie View A&M gets about $2 million a year for its juvenile center. If Bland had ended up convicted of the felony charges brought against her by the trooper who stopped her, she would have forcibly handed over at least a dollar to her alma mater.

As an esteemed black legislator in Texas, Royce West has been at the oversight helm of the investigation into circumstances surrounding Sandra Bland’s death. He has said that her being stopped and mistreated near the Prairie View campus was a travesty. He has not mentioned the economic pressures to stop her to which he, himself, contributed.

Toniesha Taylor, a communications professor at Prairie View A&M, has talked to her students since Sandra Bland died. Their conversations have led her to see the town as a place with “a horrifying over-policing of black bodies.” Taylor notes that most university staff and faculty live miles away, in Houston and its suburbs. They don’t experience what students do: being ticketed with increasingly frequency over the past few years, for minor or imagined infractions. The only difference between these young, black people and Bland, Taylor says is that “they didn’t die. She did.”