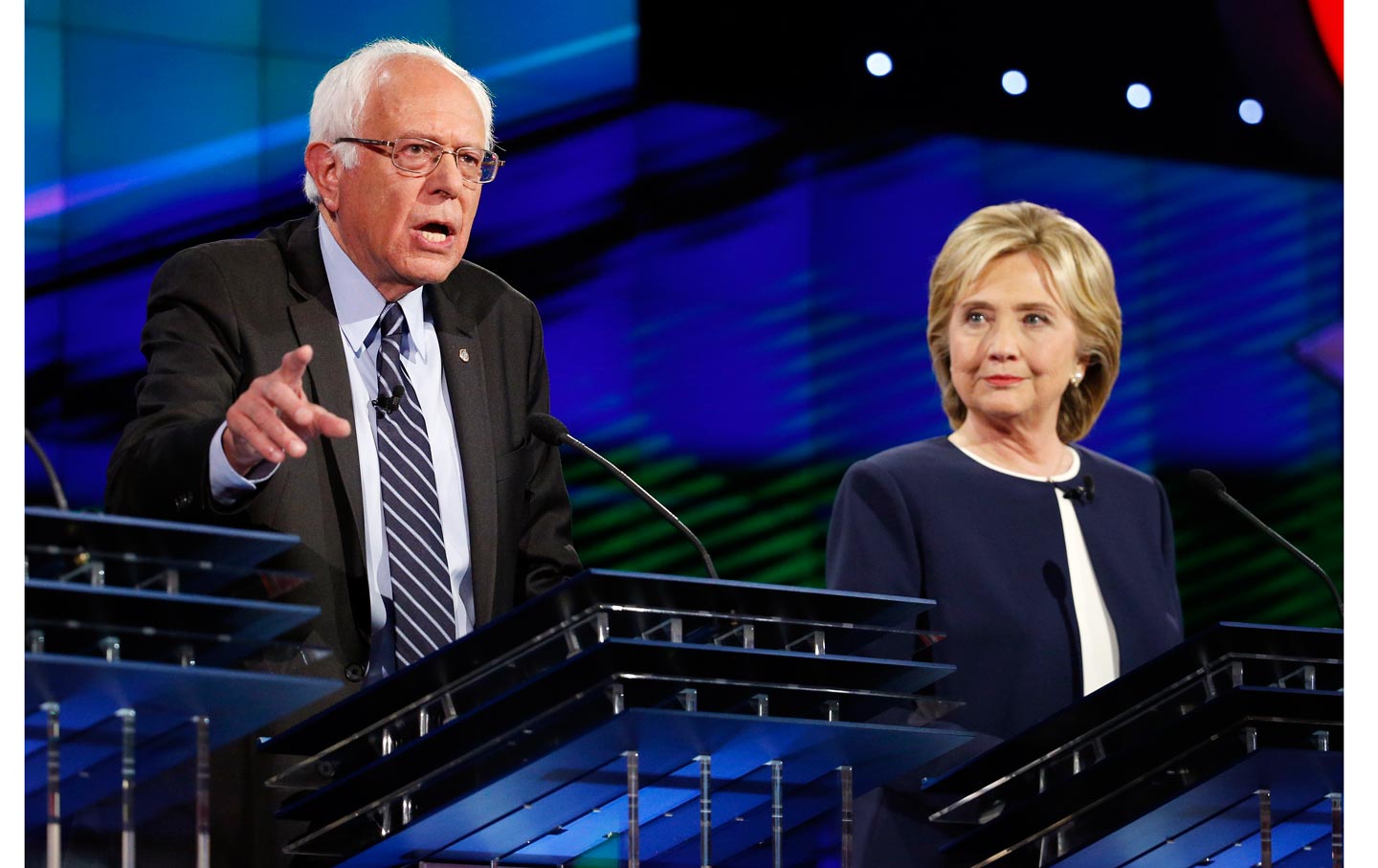 In much of the world a nationally televised political debate about the relative merits of democratic socialism as opposed to casino capitalism would not be news. Indeed, in the America of a century ago, when Socialist Party Eugene Victor Debs and Socialist Party–backed independent progressive Robert M. La Follette won millions of votes in races for the presidency, the discussion could have been had without shocking the sensibilities of the pundit class.

In the America of recent decades, however, the very thought of such a debate has been dismissed by political and media elites who have policed the national discourse into a narrow space that invariably reinforces a predictable (and often failed) status quo.

While the pivot came in the context of rather too-predictable horserace punditry, the fact that more than 15 million Americans heard a few minutes of serious discussion about economic—and political—alternatives was remarkable.

Turning to Vermont Senator Bernie Sanders, who leads in polls from the first primary state of New Hampshire and is a serious competitor in the first caucus state of Iowa, moderator Anderson Cooper said: “A Gallup poll says half the country would not put a socialist in the White House. You call yourself a democratic socialist. How can any kind of socialist win a general election in the United States?”

“[What] democratic socialism is about is saying that it is immoral and wrong that the top one-tenth of 1 percent in this country own almost 90 percent—almost—own almost as much wealth as the bottom 90 percent. That it is wrong, today, in a rigged economy, that 57 percent of all new income is going to the top 1 percent,” continued the senator, who explained “that when you look around the world, you see every other major country providing healthcare to all people as a right, except the United States. You see every other major country saying to moms that, when you have a baby, we’re not gonna separate you from your newborn baby, because we are going to have—we are gonna have medical and family paid leave, like every other country on Earth. Those are some of the principles that I believe in, and I think we should look to countries like Denmark, like Sweden and Norway, and learn from what they have accomplished for their working people.”

That was not a radical statement. Nobel Prize–winning economist Joseph Stiglitz has argued that the United States should be considering economic ideas and models from Scandinavia, explaining, “There are policies that can once again put the sought after, but increasingly unattainable middle-class lifestyle within the grasp of most Americans.”

Sanders was interrupted by loud applause from the raucous crowd that made up the Las Vegas debate’s live audience.

Cooper also interrupted, with a bit of perspective. “Denmark is a country that has a population of 5.6 million people. The question is really about electability here, and that’s what I’m trying to get at,” said the CNN host, who remarked that “the Republican attack ad against you in a general election—it writes itself. You supported the Sandinistas in Nicaragua. You honeymooned in the Soviet Union. And just this weekend, you said you’re not a capitalist.”

Unfazed, Sanders said, “Well, first of all, let’s look at the facts—the facts that are very simple. Republicans win when there is a low voter turnout, and that is what happened last November. Sixty-three percent of the American people didn’t vote, Anderson. Eighty percent of young people didn’t vote. We are bringing out huge turnouts, and creating excitement all over this country.

The senator argued that pushing the limits of the debate has the potential to bring new voters into the process: “Democrats at the White House on down will win, when there is excitement and a large voter turnout, and that is what this campaign is doing.”

Cooper asked Sanders: “You don’t consider yourself a capitalist, though?”

“Do I consider myself part of the casino-capitalist process by which so few have so much and so many have so little by which Wall Street’s greed and recklessness wrecked this economy?” replied the senator. “No, I don’t. I believe in a society where all people do well. Not just a handful of billionaires.”

Then Cooper asked the appropriate next question: “Just let me just be clear. Is there anybody else on the stage who is not a capitalist?”

This is where former secretary of state Hillary Clinton came in.

“Well,” said the front-runner for the Democratic nomination, “let me just follow up on that, Anderson, because when I think about capitalism, I think about all the small businesses that were started because we have the opportunity and the freedom in our country for people to do that and to make a good living for themselves and their families.”

Sounding themes rooted in President Franklin Delano Roosevelt’s New Deal era, Clinton said, “I don’t think we should confuse what we have to do every so often in America, which is save capitalism from itself. And I think what Senator Sanders is saying certainly makes sense in the terms of the inequality that we have.”

“[W]e are not Denmark,” she announced. “I love Denmark. We are the United States of America. And it’s our job to rein in the excesses of capitalism so that it doesn’t run amok and doesn’t cause the kind of inequities we’re seeing in our economic system. But we would be making a grave mistake to turn our backs on what built the greatest middle class in the history of the world.”

Clinton got her round of applause from a crowd that generally cheered progressive proclamations—presumably for the pledge to “rein in the excesses of capitalism.”

“I think everybody is in agreement that we are a great entrepreneurial nation. We have got to encourage that. Of course, we have to support small and medium-sized businesses,” he said. “But you can have all of the growth that you want and it doesn’t mean anything if all of the new income and wealth is going to the top 1 percent. So what we need to do is support small and medium-sized businesses, the backbone of our economy, but we have to make sure that every family in this country gets a fair shake not just for billionaires.”

Sanders and Clinton came at plenty of issues from different places, as did the three other contenders who took the stage Tuesday night: former Maryland Governor Martin O’Malley, former Rhode Island senator Lincoln Chafee, and former Virginia senator Jim Webb. (Harvard professor Lawrence Lessig should have been included, as well.)

But on the issue of capitalism, while they differed, the two leading contenders for the Democratic presidential nomination accepted that something is not working—that there are, as Clinton said, “excesses of capitalism” and “inequities we’re seeing in our economic system.”

That is not the end of the discussion.

This is merely a starting point. But the fact that a broader, deeper discussion has started suggests, against all odds and expectations, that 2016 might be the year when presidential politics gets serious about economic questions that have, for too many decades, been neglected.