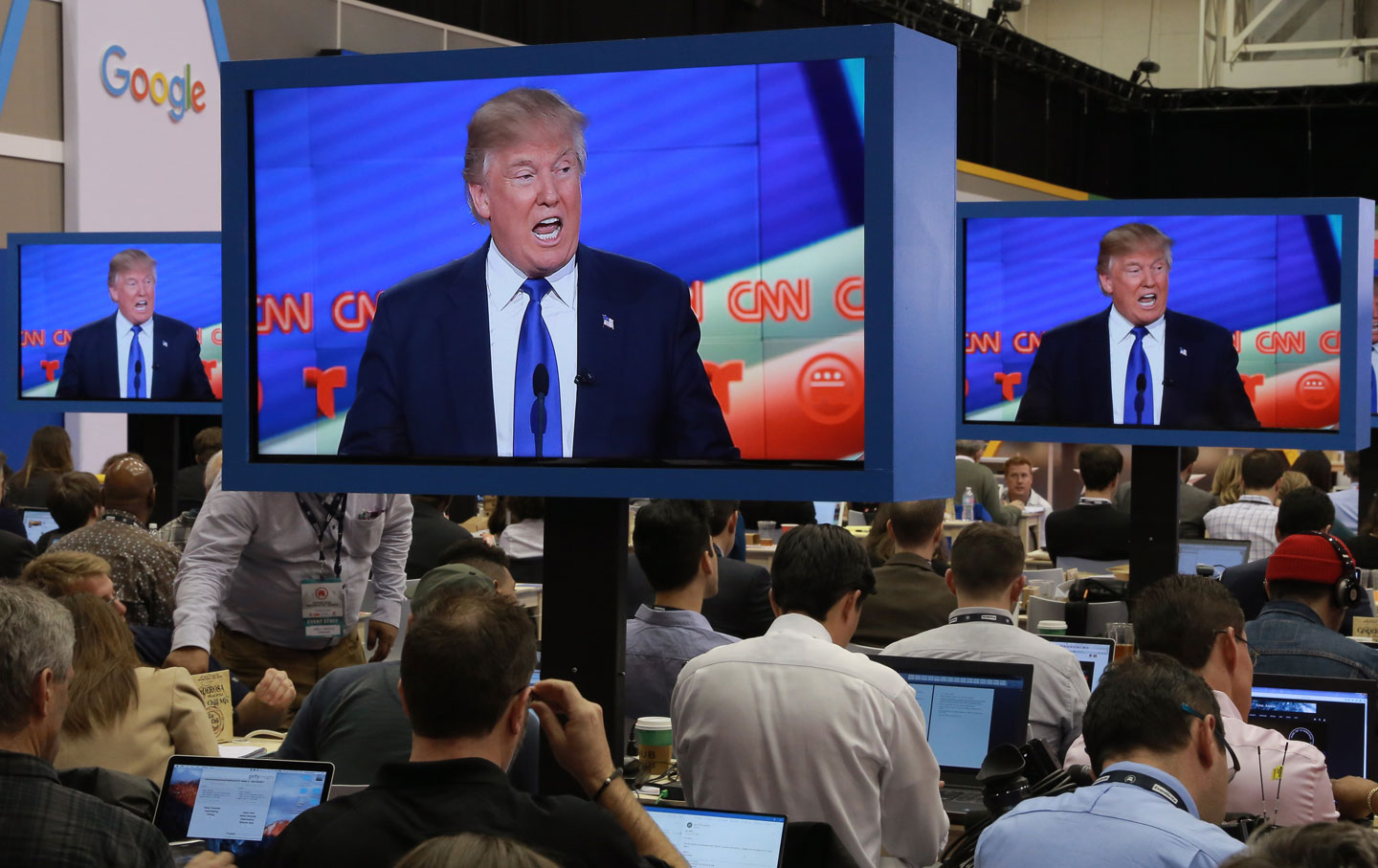 Donald Trump’s victory revealed fundamental flaws in America’s core institutions, especially its media system. While television news, professional journalists, and social-media platforms are all under scrutiny, too much of this criticism focuses on symptoms rather than deeper pathologies. Instead, we should seize this opportunity to draw attention to systemic problems in our media and push for structural alternatives.

But first, we must be clear about the central problem. Much of what ails our media system stems from its extreme commercialism. The always-controversial Trump was irresistible for ratings-driven news outlets, and their endless profit-seeking helped legitimize a dangerous politics. While it’s tempting to blame audiences for lapping this up, this coverage didn’t just reflect popular demand. Media are beholden to their owners and to the advertisers who pay them.

Trump’s screen-to-screen exposure during the campaign provided bait to capture advertisers’ most coveted product: our attention. To keep our attention, media must entertain us. And Trump delivered—especially for media’s bottom line. As CBS CEO Leslie Moonves infamously stated: “[Trump’s candidacy] may not be good for America, but it’s damn good for CBS.”

Such brazen venality is endemic throughout the news industry. With its impoverished public broadcasting, the US media system stands out among democracies for its commercial excesses. Many sectors are dominated by corporate oligopolies, producing content with few public interest protections. Is this the system Americans wanted?

To keep our attention, media must entertain us. And Trump delivered—especially for media’s bottom line.

History suggests otherwise. As my book America’s Battle for Media Democracy documents, the US media system didn’t emerge solely according to democratic criteria and public consensus. It arose instead from policy battles between activists, industries, and regulators over the media system’s fundamental design. Ultimately commercial interests, shielded by what I call “corporate libertarianism,” prevailed over a social democratic vision that privileged educational fare, public service news, and other types of media not supported by the market. We must reclaim this road not taken and de-commercialize our news media.

For over a century the United States has conducted an experiment in commercialized journalism by treating news as both a commodity and a public service. Periodic reform movements and constant criticism forced the news industry to develop ethical codes that sought to prevent commercial imperatives from overwhelming democratic principles. This experiment has failed.

Trump’s ascendance revealed that any vestige of that always-porous divide between journalism’s business and public service missions is dissolving. This erosion is most blatant in television news media, but digital journalism’s increasing reliance on exposing readers to invasive and deceptive advertising is also part of the problem. As revenues for hard news vanish, the growing emphasis on clickbait and sensationalism continues to degrade journalism and squander the public’s trust.

America’s commercial media system might be great for business, but it’s terrible for democracy. Uncoupling journalism from commercialism requires a structural overhaul. Alternative models from the American past and from other countries demonstrate that different systems are indeed viable. But they require policy interventions that establish safeguards and incentives for responsible and informative media. Ultimately, these policies must remove profit motives from the news.

America’s commercial media system might be great for business, but it’s terrible for democracy.

Three general approaches can reduce commercial pressures on news media. First is to break up media monopolies and prevent further market concentration. Trump’s campaign rhetoric suggested that he’d prevent media mergers, but many of his policy moves thus far betray a cynical and phony populism. A second approach is to build and fund public media infrastructures, from community radio to municipal broadband networks. Although national policies toward this goal are unlikely under Trump, they remain feasible at the local level. A third means of protecting the public interest is to closely regulate monopolies in sectors where competition is impractical.

This last approach could apply to Facebook, a powerful monopoly that controls a major global news source. Its CEO, Mark Zuckerberg, has thus far refused to even acknowledge that Facebook is anything more than a technology company, although recent signs suggest this stance is changing in response to criticism. Still, some form of external oversight is needed to encourage accountability, perhaps beginning with an independent press council or some other outside organization made up of public advocates, journalists, and technologists who can watchdog Facebook’s actions and ensure transparency.

Digital-media monopolies also could be pressured to help fund newsgathering. This money could derive from a “public service tax” or as conditions placed on mergers. Recently, the Media Reform Coalition in the UK has called for a bill forcing Google and Facebook to help subsidize public service reporting. These two firms devour the lion’s share of digital advertising revenue, further weakening legacy news organizations that are expected to help fact-check against fake news. Media reformers are pushing for a 1% levy on these digital intermediaries’ operations to go toward funding independent and nonprofit ventures, with an emphasis on local and investigative reporting.

Public options are also necessary, especially given the market’s inability to support public-service journalism. For example, the BBC is bolstering the UK’s struggling news industry by funding 150 reporters at news-media organizations across the country to focus on local politics and share their coverage with various news providers. The money used to employ these journalists will also fund a local video- and audio-news bank and other types of digital content accessible to local news providers.

Like the rest of the democratic world, the United States could fund a strong public media system—as opposed to privatizing it, which the Trump administration intends to do. A number of creative means could generate public media subsidies, including revenues from spectrum sales. The media-reform organization Free Press (of which I’m a board member) is advocating that public-television stations devote proceeds from spectrum auctions toward supporting local journalism.

We could also leverage already-existing public infrastructure. One possibility is to transform post offices into local community media centers. In addition to providing public Internet access, these spaces could help facilitate local reporting through various media—including print, digital platforms, and low-power radio stations—that adhere to meaningful public-service obligations. The Urbana-Champaign Independent Media Center launched a similar model over a decade ago when it raised money to buy the downtown post office for community media-making and other progressive projects.

Promising nonprofit news experiments like ProPublica and The Intercept have emerged in recent years, and last year the owner of Philadelphia’s newspapers transitioned those entities into a “public benefit corporation.” We could incentivize this sector’s growth with tax breaks for struggling newspapers to transition into low- and nonprofit status. Over time, these new institutions, liberated from commercial constraints, may enable the adversarial journalism our democracy desperately needs, especially during the Trump era.

These modest proposals are not utopian. They are founded on social-democratic models from our own history and from other industrialized nations. Taken together, these reforms may provide seeds for an alternative media system dedicated to democracy instead of profit. Trump’s manipulations of our news media unmasked a virulent commercialism that seeks to merely entertain, not inform. This wasn’t inevitable—a very different media system was, and still is, possible. But we must fight for it.