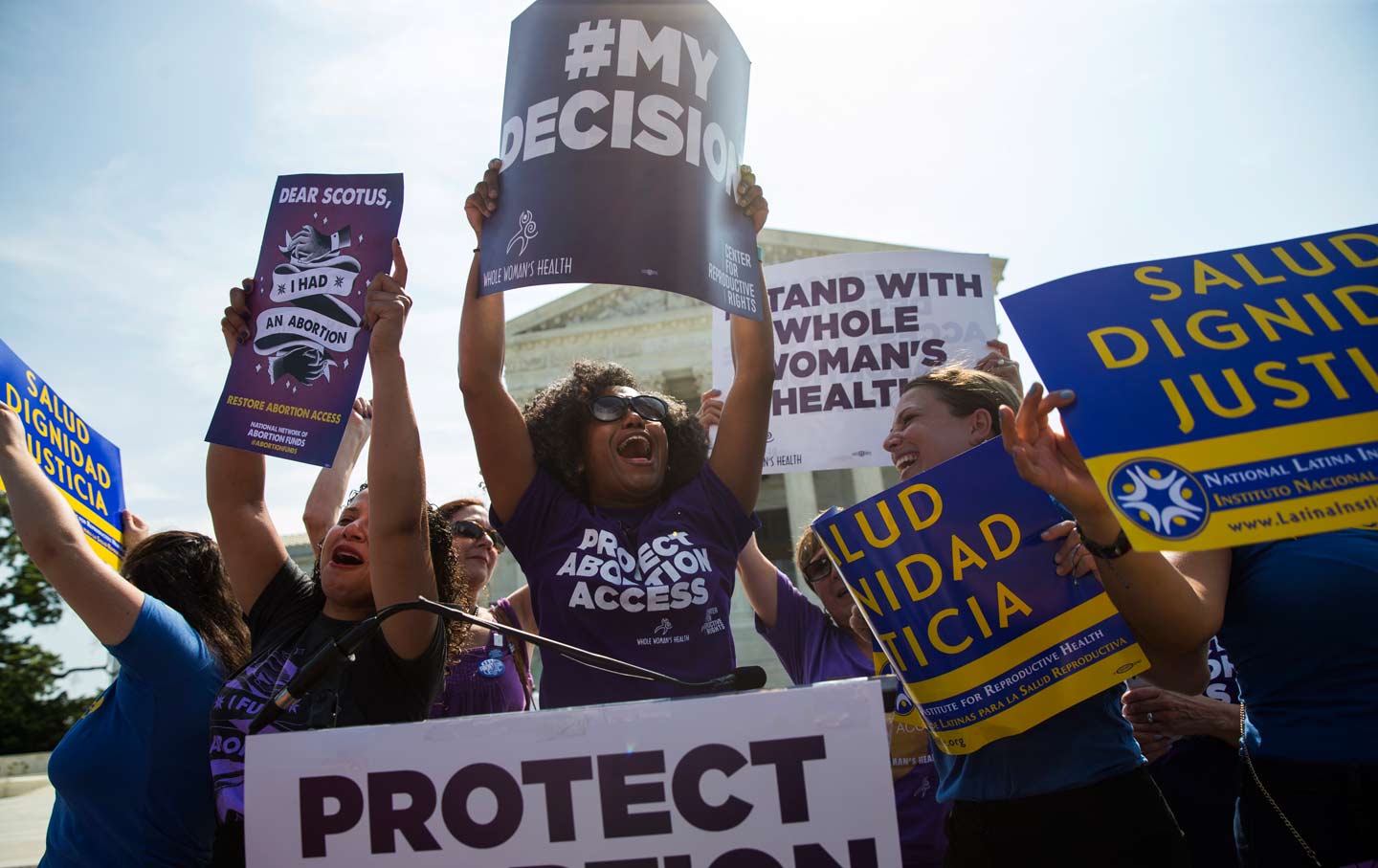 I spent the last half-hour before the Supreme Court’s decision was announced in Whole Woman’s Health v. Hellerstedt on a Google Hangout with independent abortion providers from the Abortion Care Network. It was a pretty anxious wait, with lots of nervous joking and obsessive checking of SCOTUSblog. When the news came down, believe me, I wasn’t the only one with tears of relief, joy, and astonishment in my eyes. We won! We won 5–3! And the cream of it was, even if Antonin Scalia had been on the bench, we still would have won. After so many years on the defensive—so many disappointments, so much frustration, and so many losses—pro-choicers finally have something big to celebrate.

It is hard to overstate what this victory means to the people who have run the clinics and provided the care, despite being forced to practice medicine in ever more constricted ways—ways that have nothing to do with providing safe, compassionate, state-of-the-art health care. Partly thanks to State Senator Wendy Davis’s famous filibuster, HB2—the 2013 Texas law that the Court struck down—came under a lot of scrutiny. In the name of protecting women’s safety, the law required clinics to meet the same standards as small hospitals, at a prohibitive cost, and clinic doctors to have admitting privileges at nearby hospitals, which refused to grant them. Over half the abortion clinics in Texas were forced to close; had HB2 been upheld only nine or ten would have remained. But HB2 was only one of at least 288 restrictive abortion laws passed in the United States since 2010, many of which had the same bogus women-friendly rationale, but which were really intended to make trouble for both patient and clinic. Four visits for a patient to take the abortion pill, which is perfectly safe to take at home? The same doctor who performs the abortion has to meet with you days earlier to read you “information” about how abortion causes breast cancer? As clinics closed—one in four independent clinics in the past five years, and not all of them in red states, by the way—the burdens on the remaining ones increased. This forced some women into long, expensive journeys and pushed others to postpone their abortions into the second trimester, when the procedure is both more expensive and more complicated.

Breyer pointed out that colonoscopies and vasectomies are both more dangerous than abortion.

Justice Stephen Breyer’s dry and careful opinion refuted the argument that HB2’s restrictions protect women’s health just because the Texas state legislature says so: “when directly asked at oral argument whether Texas knew of a single instance in which the new requirement would have helped even one woman obtain better treatment, Texas admitted that there was no evidence in the record of such a case.” Breyer pointed out that colonoscopies and vasectomies are both more dangerous than abortion, and that while childbirth is 14 times more likely to end in the woman’s death (to say nothing of serious injury) than abortion, “Texas law allows a midwife to oversee childbirth in the patient’s own home.” Justice Ruth Bader Ginsburg’s concurring opinion added the necessary touch of exasperation: “It is beyond rational belief that HB2 could genuinely protect the health of women, and certain that the law would simply make it more difficult for them to obtain abortions.”

A hallmark antiabortion strategy—eliminating access to the procedure incrementally by regulating it out of existence—has been dealt a severe blow, along with its proponents’ claims to have the best interests of women at heart. It’s almost sad, in the Trumpian sense of the word, to watch abortion opponents flail and deny. Kathy Ostrowski, state legislative director of Kansans for Life, was typical: The decision negates any possible regulation of clinics, even “disgusting, filthy hole-in-the-wall clinics that won’t upgrade their facilities.”

Hardly: Clinics, like other medical facilities, can still be regulated—they just can’t be obstructed in the hope of putting them out of business with laws that apply to no other medical procedure, including more dangerous ones, like, um, colonoscopies and dental surgery. On the other hand, Charles C. Camosy, an associate professor of theology at Fordham University, thinks the decision is a “dud,” a mere technical ruling that can be easily surmounted. After all, the Court didn’t rule out the possibility that some benefit to women might be found that outweighs keeping the clinics open. So all abortion opponents need to do is produce evidence for the Court that abortion is dangerous. Silly Texas, why didn’t you think of that? (Answer: Because no such evidence exists.)

Not so long ago, the pro-choice movement seemed tired, cautious, and pessimistic.

For pro-choicers, what a difference a few years make! Not so long ago, the movement seemed tired, cautious, and pessimistic (at least in private), as its opponents racked up success after success and, at least according to the media, seemed to be gaining the advantage in popular opinion as well. Some states, I was told by close observers of the scene, might have to be abandoned altogether.

For the brilliant and relentless legal team at the Center for Reproductive Rights, this is a huge victory. It also shows the effect of a new generation of activists who frame abortion as a normal event in women’s lives and a basic part of health care. Storytelling has helped demystify the procedure and the women who seek it: It’s much harder now to stereotype them as teenagers who don’t want to miss out on the prom or posh ladies who already have a vacation in Europe scheduled. Personal testimony was a particularly effective part of the CCR’s argument in Hellerstedt: an amicus brief signed by 113 women lawyers described how abortion had made possible education, legal careers and happy lives. A sampling:

“If I had not had an abortion, I would have never been able to graduate high school, go to college, [or] escape my high-poverty rural county in Oregon. I would never have been able to fully participate in the civil and social life of the country.”

“My decision to have an abortion was essential to the freedom that allowed me to finish college while working more than one job.”

“[My partner at the time] said that were I to keep the child, I would not be able to go to [my post-doctoral fellowship], nor would he consider following me for my career or [would he] let me raise the child away from him. I realized I was in a desperate situation. . . . My abortion provided me with the geographic freedom I needed, saved my child from having an abusive father, and allowed me to use my educatIon for the social good.”

Celebrities, long missing in action, are also going public: Recently, Chelsea Handler talked about the two abortions she had when she was 16. As Amelia Bonow, cofounder of #ShoutYourAbortion (a group that encourages women to reflect on their abortions publicly and favorably), puts it: “We cannot demand justice for an invisible population. Nobody was trying to pass marriage equality when everyone was in the closet.”

“People are hungry for that conversation,” Kansas-based clinic director Julie Burkhart told me by phone. “So many are more open than you’d think.” With Kansas’s Texas-like law, enjoined since 2011, likely to be thrown out—along with similar laws in Alabama, Louisiana, Wisconsin, Mississippi, and other states—Burkhart is breathing a little easier. Her clinic in Oklahoma is scheduled to open within weeks. And after that? “We’re putting together a list of statutes that have no other function than to hamper abortion care. Oklahoma has a 72-hour waiting period and dual parental consent.”

Political change may be on the way, too. While President Obama accepted the Hyde Amendment, which bans federal Medicaid payments for abortion, Hillary Clinton has endorsed getting rid of it. Her days of calling for abortion to be “safe, legal, and rare” are clearly behind her. If you think of the presumptive Democratic nominee as a cautious moderate, this means abortion access has gone mainstream. Finally!