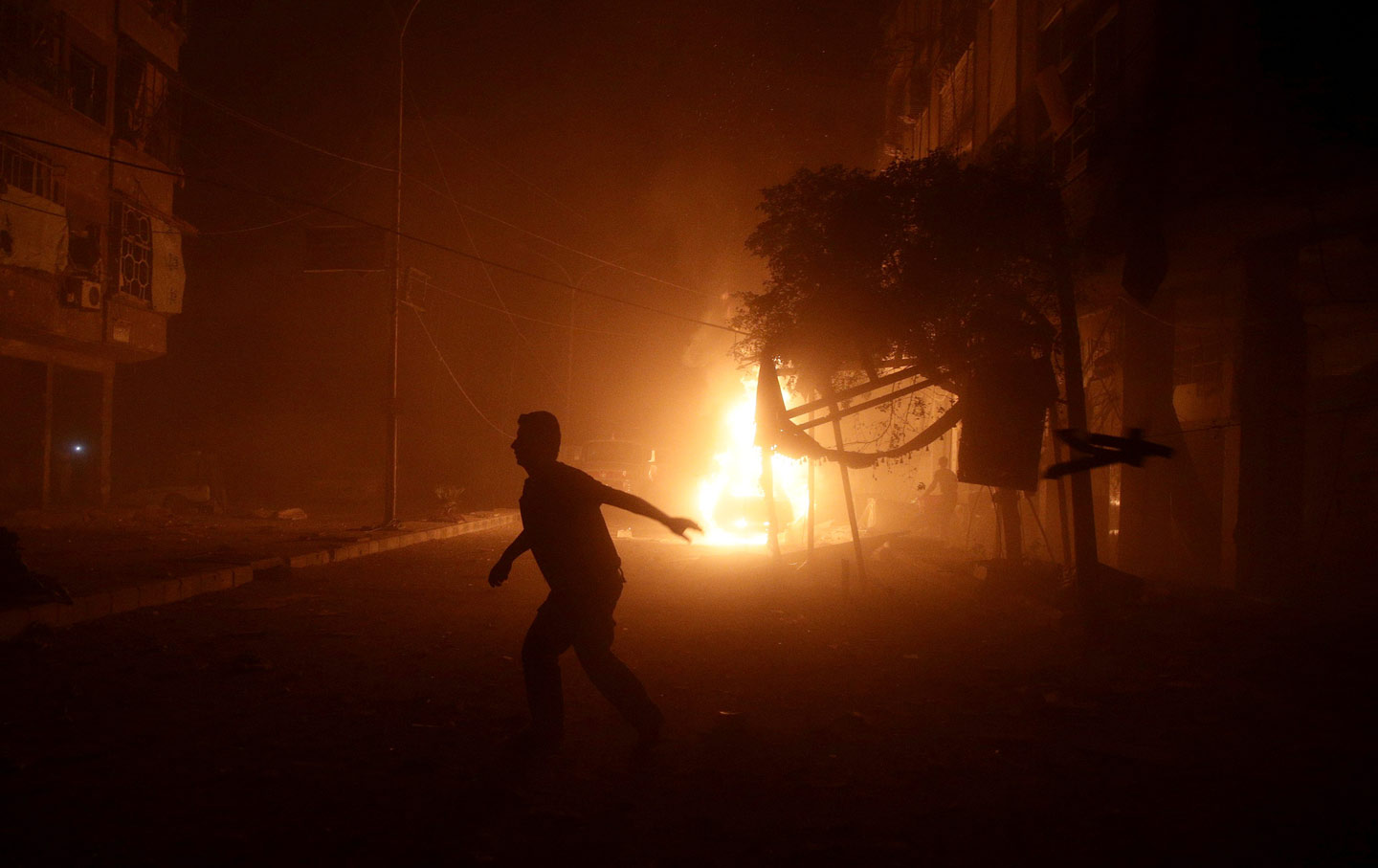 A man runs near a burning car after an airstrike in Damascus, Syria on October 3, 2016. (Reuters / Bassam Khabieh)

This afternoon the State Department announced that the Obama administration is suspending bilateral talks with Russia regarding the war in Syria. The statement by State Department spokesman John Kirby read, in part, that the decision to suspend “bilateral channels with Russia that were established to sustain the Cessation of Hostilities” was “not a decision that was taken lightly.” The statement said that the United States “spared no effort in negotiating,” yet “Russia failed to live up to its own commitments.”

White House spokesman Josh Earnest told reporters on Monday, “Everybody’s patience with Russia has run out.” Meanwhile, the pressure on the administration to “do something” in Syria is growing. At a Senate Foreign Relations Committee hearing last week, Tennessee Senator Bob Corker repeatedly expressed his dismay that the administration has not come up with a “Plan B” in Syria, including the implementation of a no-fly zone over northern Syria or the creation of so-called “safe zones” for non-combatants fleeing the violence.

Former general and CIA director David Petraeus, no doubt echoing the establishment consensus on these issues, told Charlie Rose last week that establishing these zones would be “very, very straightforward” and could be achieved “very, very quickly.” The general’s assurances aside, the administration might do well to recall the consequences of a similar operation over Kosovo (which resulted in a bombing campaign that lasted 78 days) or of the more recent imposition of a no-fly zone over Libya.

Unlike in those cases, both the Russians and Iranians have personnel on the ground in Syria, while the Russian and the Syrian Arab Air Forces are executing an air campaign over rebel-held (or more accurately, jihadi-held) east Aleppo. The mainstream media continue to gloss over the rather salient fact that civilians who are trying to flee the Russian-Syrian bombardment are often blocked from doing so by US- and Gulf State–funded “rebels.”

The decision by the Obama administration to suspend talks with Russia, therefore, while alarming in the extreme, is perhaps not so surprising, given a CNN report over the weekend that showed that Secretary of State John Kerry—whom many observers (including this author) wrongly saw as a dove on matters relating to Syria and Russia—has been pushing for a military solution in Syria all along.

A leaked recording of Kerry at UN headquarters in September reveals that he told Dutch diplomats: “I think you’re looking at three people, four people in the administration. I lost the argument. I’ve argued for the use of force. I’m the guy who stood up and announced that we’re going to attack Assad for the use of weapons.” Kerry continued, “So far, American legal theory does not buy into the so-called right to protect.… Nobody [is] more frustrated than me.”

Is there any relevant history to which administration officials might turn to guide them, now that it seems we are eyeball-to-eyeball with Russia in Syria?

On January 27, 1965, President Lyndon Johnson’s National Security Adviser McGeorge Bundy and Defense Secretary Robert McNamara authored what became known as the “fork in the road” memo regarding US policy in Vietnam. Bundy wrote President Johnson that “Bob and I believe that the worst course of action is to continue in this essentially passive role which can only lead to eventual defeat and an invitation to get out in humiliating circumstances.” [Emphasis added.]

The alternatives Bundy and McNamara set out to Johnson were these: either “use our military power in the Far East and force a change in Communist policy” or “deploy all our resources along a track of negotiation, aimed at salvaging what little can be preserved with no major addition to our present military risks.”

President Obama, it would seem, is now himself at a “fork in the road” with regard to Syria. He would be unwise to brush aside the advice of his predecessor Jimmy Carter, who wrote in The New York Times/em> only two weeks ago that

American-Russian leadership is critical for this approach to work. Each side must persuade its regional allies to cooperate. But that alone won’t be enough. The Syrians who have been the cannon fodder in this war must make their voices heard, with a loud and clear statement: “Stop the killing.”

A military solution, and facile promises of easy answers like the imposition of no-fly and/or safe zones (which are neither easy nor answers) is not the way forward. Obama and his advisers have made a potentially grave error in cutting off talks with the Russians, and even a cursory glance back through the history of recent American military interventions should steer them back to, not away from, the negotiating table.