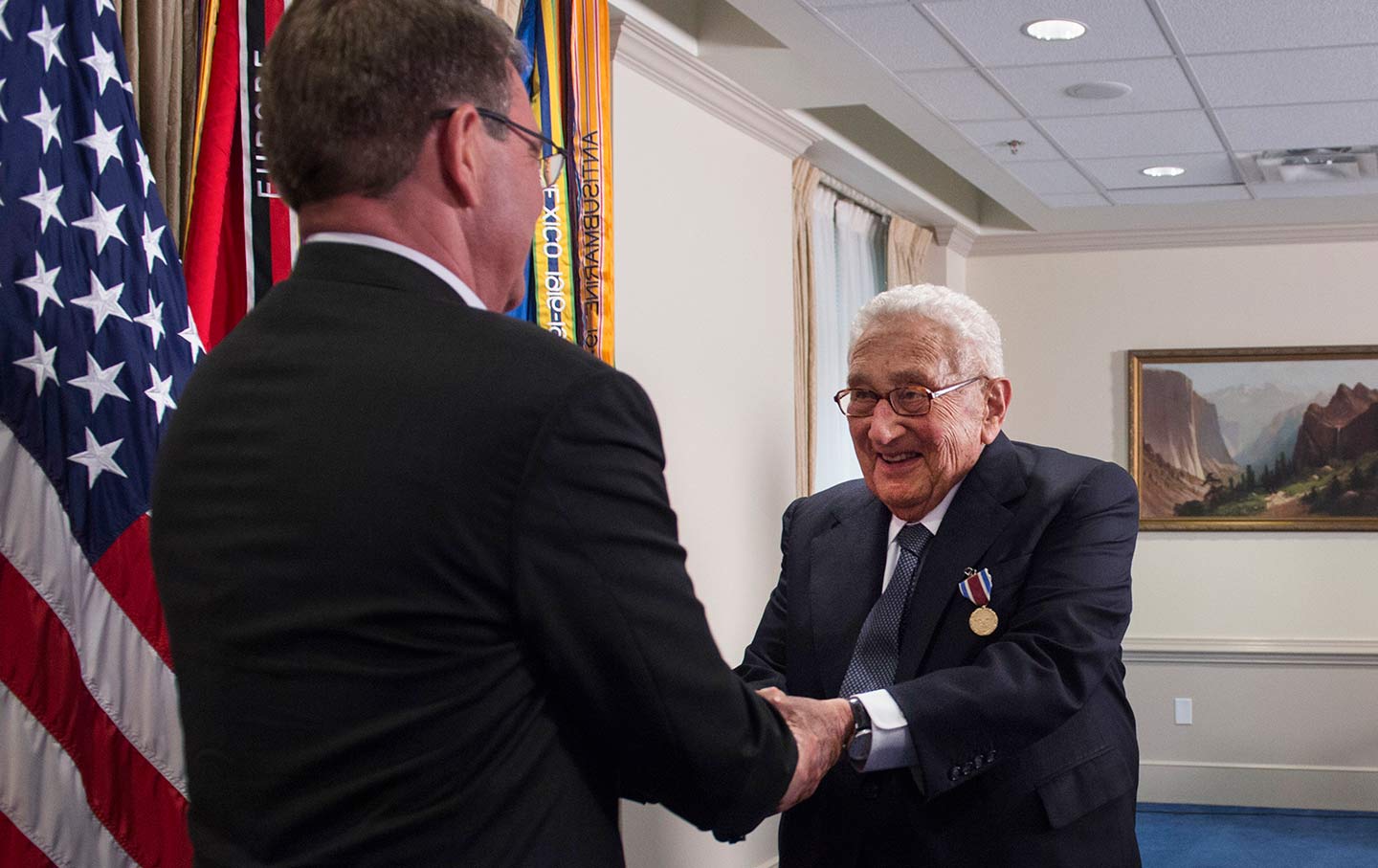 Kissinger, again. Yesterday Secretary of Defense Ashton Carter honored Henry A. Kissinger at the Pentagon by presenting the former secretary of state with the Distinguished Public Service Award, apparently the highest award the Department of Defense has for private citizens. Carter himself deserves an award for understatement, calling the man who is responsible, directly or indirectly, for the deaths of millions of people in Southeast Asia, East Timor, Bangladesh, and southern Africa, among other places—”unique in the annals of American diplomacy.” Kissinger, Carter said, “demonstrated how serious thinking and perspective can deliver solutions to seemingly intractable problems.” As to allegations of war crimes, “the fact is,” said Kissinger, he and Richard Nixon “were engaged in good causes.”

Where to start? It’s exhausting trying to keep track of what is now a quarterly celebration of the 92-year-old Kissinger. It was just six or so months ago when The New York Times Book Review assigned Kissinger’s preferred authorized biographer to review a Kissinger biography written by Kissinger’s second-choice biographer. A “masterpiece”! the first said of the second. And then, three months ago, Hillary Clinton, in a debate with Bernie Sanders, cited Kissinger’s recommendation as a referral for the White House.

At the time, Clinton’s remarks seemed a misstep, allowing Sanders an opening to criticize her catastrophic interventionism in Iraq, Syria, and Libya. Now, though, it is clear that Clinton’s invocation of Kissinger wasn’t a fluke but rather a preview of a general election strategy to run to Trump’s right on foreign policy and win over the hawkish wing of the Republican Party. “The candidate in the race most like George W. Bush and Dick Cheney from a foreign-policy perspective,” Republican strategist Steve Schmidt recently said, “is in fact Hillary Clinton.”

It would be pointless to provide yet another recitation of the many miseries Kissinger caused around the globe during his long run in public office from 1969 to 1977. By now, those who want to know his atrocities know his atrocities. Even his authorized biographer, Niall Ferguson, doesn’t deny that Kissinger is a criminal but rather mitigates the crimes by comparing them to other crimes: “Nearly a hundred times as many people,” Ferguson writes, “died” as a result of John Foster Dulles’s actions in Guatemala as “were ‘disappeared’ in Chile” after the 1973 coup vigorously encouraged by Kissinger, yet “you will search the libraries in vain for The Trial of John Forster Dulles” (Ferguson apparently hasn’t yet read the books by David Talbot and Stephen Kinzer). Kissinger is implicated in at least three genocides (Cambodia, Bangladesh, and East Timor) and, give or take, 4 million deaths.

Kissinger’s unusually high body count and singular moral imperiousness has the effect, among his critics, of obscuring his didactic utility. An outsized personality who has committed outsized mayhem, Kissinger eclipses his own context. Yet as animals were to the anthropologist Claude Levi-Strauss, Kissinger is good to think with.

Kissinger celebrants inevitably point to two things to justify their admiration: an opening to China—“rapprochement”—and improved relations with the Soviet Union—détente—which included SALT, a historic arms-limitation treaty. These initiatives are often described as the pillars of his “grand strategy,” stabilizing the post-Vietnam international order and allowing the United States, the Soviet Union, and China to stake out spheres of influence.

Let’s grant these two achievements to Kissinger (even though scholars of foreign relations question just how central he was to either). If these policies—purportedly enacted to stabilize the interstate system—had been allowed to mature, one could imagine a number of salutary effects. In the United States, for instance, Washington could have demilitarized in the wake of the Vietnam War, using funds that would have gone into the military budget to recapitalize domestic infrastructure and nonmilitary research and development, making possible a different kind of response to the 1973–75 economic crisis, a value-added, good-paying, mass-industrial public policy rather than the “free trade” race to the bottom that was put into place. But they didn’t have a chance to mature, and they didn’t because of, at least in part, the actions of Henry Kissinger.

In the realm of foreign policy, in the years following the end of the Vietnam War, Kissinger, in one region after another, executed policies that helped doom his own grand strategy, undermining détente and canceling out whatever steadying effect it might have provided the planet. In southern Africa, for instance, Kissinger supported civil wars that would last decades and kill millions. In the Middle East, he pointlessly provoked the Soviet Union and laid the foundation for the jihadists. The militarization of the Gulf, including the brokering of ever larger arms sales to Saudi Arabia in exchange for petrodollars, was a Kissinger initiative, one that was enthusiastically continued by all subsequent secretaries of states, including Hillary Clinton (see this essay I did for TomDispatch, drawn from Kissinger’s Shadow, on Kissinger’s consequential post-Vietnam turn toward the Middle East).

Domestically, Nixon and Kissinger, as they themselves put it, intentionally used foreign policy to “break the back” of domestic opponents and “destroy the confidence of the people in the American establishment.” They had mixed results with the former (Nixon did win a landslide reelection in 1972, though he was subsequently driven out of office), but succeeded, stunningly, with the latter, beginning the erosion of confidence in the “establishment” (see Trump, Donald).

Under Nixon and Ford, Kissinger constantly invoked Weimar Germany to warn liberals about the “brutal forces in the society,” the “real tough guys,” who were waiting in the wings. Kissinger, Kissinger said, was the only thing standing between them and the fascists (that’s why, one of his rationales goes, he had to bomb Cambodia, as blood tribute to a rising New Right). Well, by 1980, he was with those brutes. Endorsing Ronald Reagan in 1980, Kissinger threw in with America’s new militarists, who would jump-start a revived Cold War and drive to retake the Third World.

That the policies Kissinger would hand off to his successors were morally indefensible is a matter of opinion. Less contestable is the claim that he left the world polarized and, in the long-run, volatile, despite the short-term stability of the jackboot. In a way, Kissinger did to the larger Third World what he did to Cambodia: He institutionalized a self-fulfilling logic of intervention. Action led to action, reaction demanded more action. Just as his secret bombing so roiled Cambodia’s borders that, by early 1970, it made a major land invasion using US troops seem like a good idea, Kissinger’s global post–Vietnam War diplomacy so inflamed the international order that it made the neocons’ radical vision of perpetual war look like a reasonable option for many of the world’s problems.

Zack Beauchamp over at Vox had a good summary of Kissinger’s war crimes, though the premise of the essay’s title—“The Obama Administration Is Honoring Henry Kissinger Today. It Shouldn’t Be”—is exactly backwards.

Of course the White House should be honoring Kissinger, since it runs its endless war by Kissinger’s rules. The right to bomb neutral countries the United States isn’t at war with in the name of national security is now unquestionably accepted across the foreign policy spectrum, as is the right of the White House to engage in extrajudicial assassination at will (Kissinger’s illegal Cambodia bombing set a precedent, but he also lent critical legitimacy by supporting Reagan’s bombing of Libya, George H.W. Bush’s invasion of Panama and Gulf War I, and George W. Bush’s Gulf War II).

At 92, Kissinger, after picking up a few more honorifics and celebrating a few more star-studded birthdays, will soon go to his grave eulogized by President Hillary Clinton, at a funeral attended by Samantha Power, knowing that he’s won.