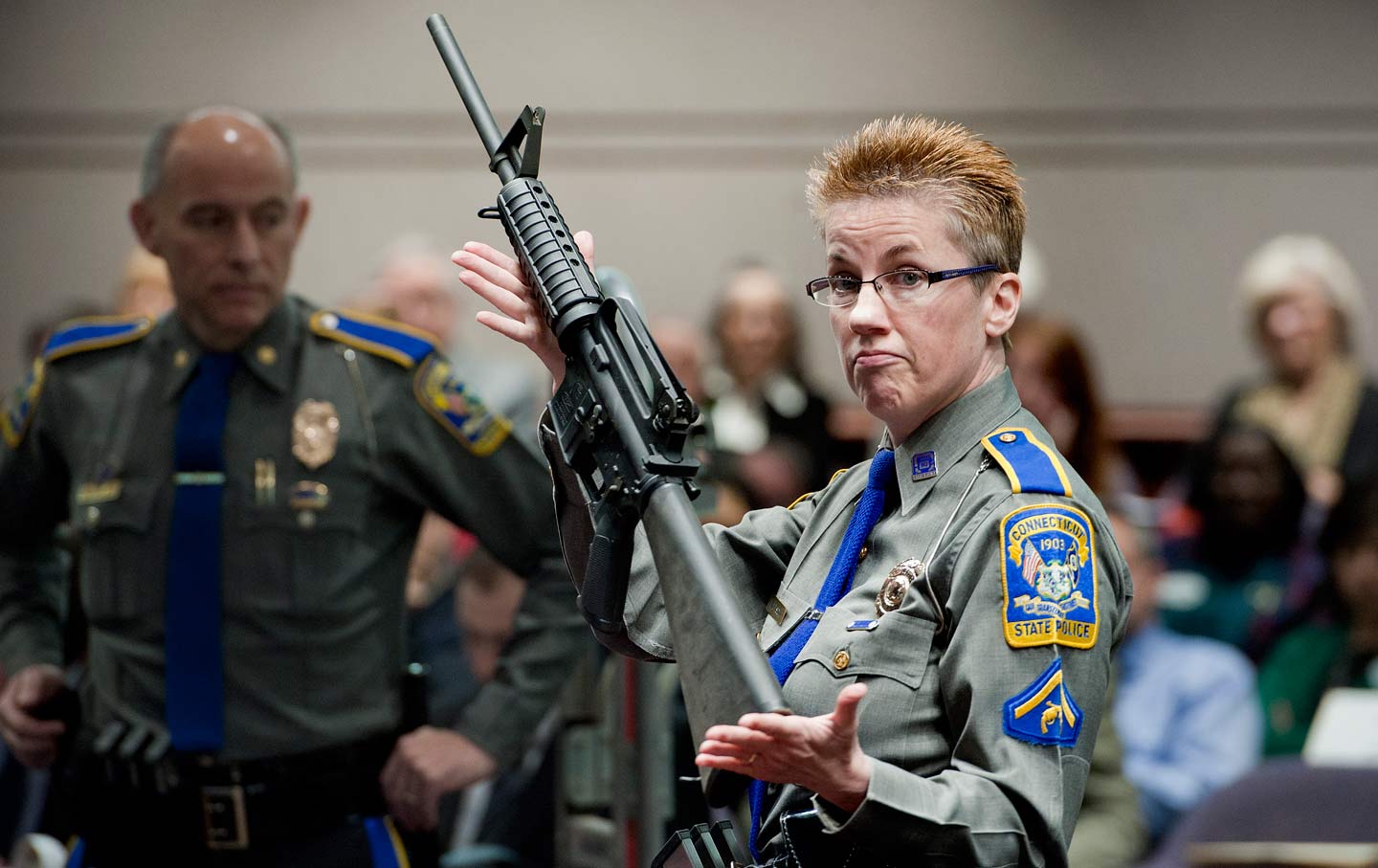 A Connecticut judge ruled Thursday afternoon that a lawsuit against Remington Arms Company over the mass shooting at Sandy Hook Elementary School can move forward.

The ruling is a victory for the victims and families who brought what could be a landmark case against gun manufacturers—but it should be understood as a narrow procedural win that did not yet beat back the gunmaker-immunity law passed by Congress in 2005. Ultimately, the unprecedented immunity given to gun manufacturers may still shield Remington from any liability for the deaths of 20 children and six adults at Sandy Hook in December 2012.

The families are arguing that Remington is liable for “negligent entrustment” of the Bushmaster XM15-E2S that Adam Lanza used to carry out the massacre. When Congress passed the Protection of Lawful Commerce in Arms Act (PLCAA), the highly controversial legislation that gave gun manufacturers broad immunity against civil suits, it wrote in an exemption for negligent-entrustment claims.

But negligent-entrustment cases have commonly involved situations where a gun shop sells a weapon to someone it knows shouldn’t have it. The Sandy Hook families are making a novel claim that gun companies, and in this case Remington, are guilty of negligent entrustment by the very act of mass producing and marketing lethal, military-style weapons to the general public despite recurring evidence that assault rifles are used in mass killings—and that the gunmaker-immunity law does not apply.

If successful, their case would open the industry to waves of lawsuits over deaths caused by assault rifles. If the trial even got to the discovery phase, it might reveal fascinating information about how gun companies market their weapons, and what they truly believe about the lethality of their products.

Judge Barbara Bellis didn’t rule on the question of whether the families have a legitimate negligent-entrustment claim that gets past the PLCAA. Rather, she rejected a bold defense motion to dismiss the case that argued that the court doesn’t even have jurisdiction in the first place.

“[Defense lawyers] were trying to get the case dismissed before any discussion of the facts simply on the basis of PLCAA, saying that it was a jurisdictional statute that denies the court the opportunity to even consider the claims,” said Adam Winkler, a law professor at UCLA who has written extensively about the legal landscape around gun control. Bellis rejected that claim, and said her court does have jurisdiction.

If the defense lawyers had successfully argued that courts can’t even hear cases against gun manufacturers, it would have been a notable victory for the industry. But just because Bellis will continue to hear the case, it doesn’t mean she will ultimately decide that the families can get around PLCAA. “As to other issues about the legal sufficiency of the plaintiffs’ claim, she sort of kicked the can down the road, and so they’re going to have to fight about that again,” said Sachin Pandya, a law professor at the University of Connecticut.

The next court hearing is scheduled for April 19, and victory for the Sandy Hook victims and families remains a distant goal. “I think the plaintiffs still have very tough road ahead of them,” said Winkler. “The PLCAA provides broad protection for gunmakers, and the gunmakers may yet win this case and get the plaintiffs’ claims thrown out.”

Gunmaker immunity has taken a central role in the Democratic presidential primary, as Bernie Sanders voted for the immunity legislation. During the campaign, he co-sponsored a bill to repeal most of the immunity provisions in PLCAA, but he also has defended his vote at times, and told the New York Daily News this month that he doesn’t think “the victims of a crime with a gun should be able to sue the manufacturer.”

Bellis’s ruling came down only hours before the final Democratic presidential debate. In a statement, Clinton said, “Today’s ruling in Connecticut is an important step forward for these families, who are bravely fighting to hold irresponsible gunmakers accountable for their actions. They deserve their day in court. Period. Unfortunately, PLCAA—the sweeping immunity law that protects gun manufacturers and dealers—still remains a major obstacle for these families and others seeking to hold these gun companies accountable.”