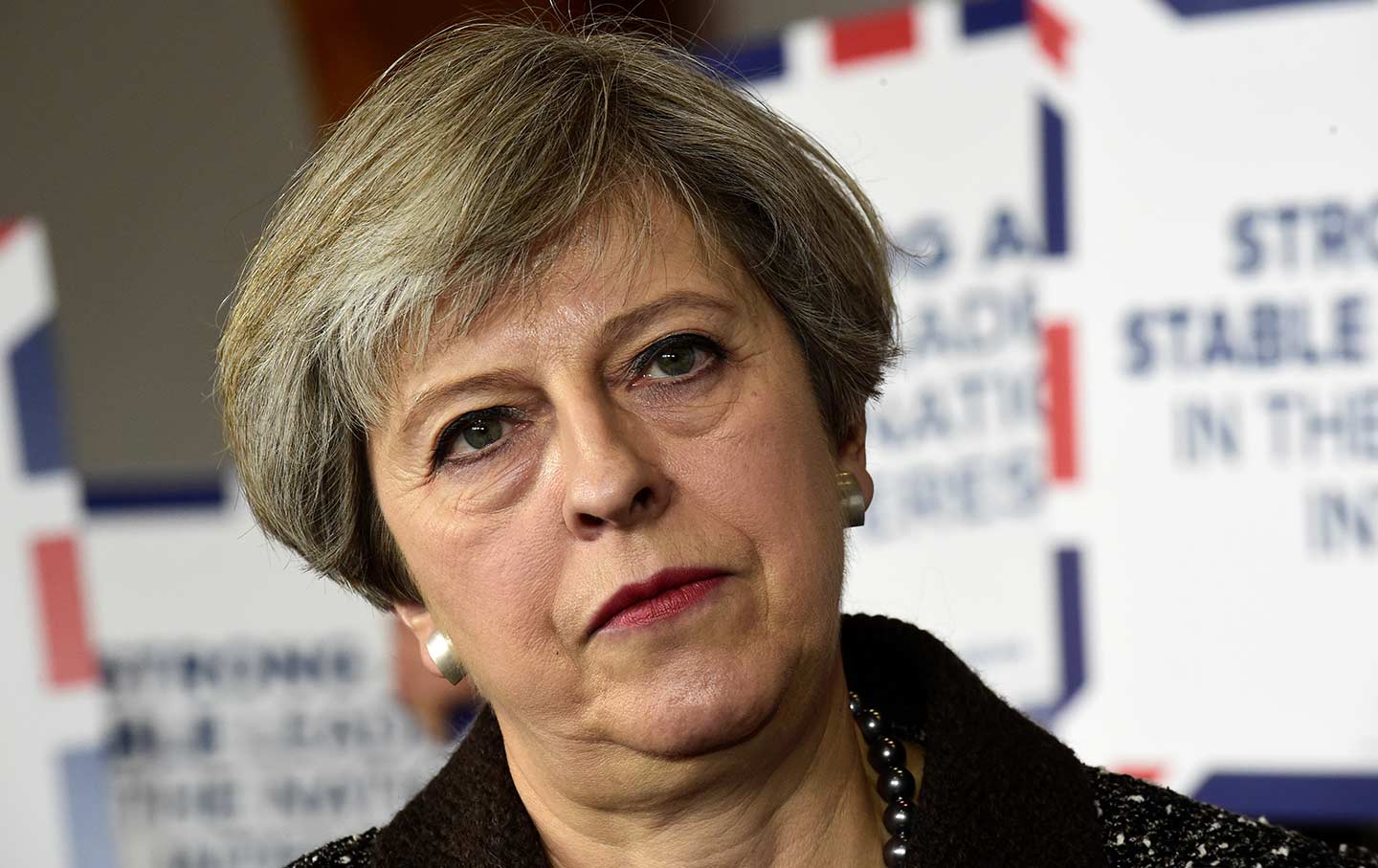 London—A peaceful Martian landing here the week after Prime Minister Theresa May called her June 8 snap election might well be mystified by the opinion polls, which consistently put the Tories at least 20 points ahead of Labour. Almost everyone (including former former prime minister Tony Blair, who refuses to lie down quietly in his coffin) seems to accept that a Tory victory is inevitable. The only question is how big a majority May will have—and whether there will be a functioning opposition in Parliament to Brexit at any cost, deeper cuts to public spending, and the final dismantling of the tattered welfare state.1

Our Martian might observe that day after day, Labour is issuing moderate, center-left proposals (raising the minimum wage, building affordable housing, integrating health and social care, reversing cuts in corporation taxes), while Tory politicians rant about the danger Labour leader Jeremy Corbyn presents to Britain’s security, call him childish names, and bang on about the need for “strong and stable” government. Why, it might reasonably ask (for peaceful Martians are surely gender neutral), would a nation choose these belligerent, self-serving martinets over the quiet, bedraggled lot on the other side?2

Announcing the election, May claimed that after last year’s Brexit referendum, “the country is coming together but Westminster is not.” (“Crush the Saboteurs,” roared the Tory Daily Mail.) In fact, the opposite is true. Tory and Labour MPs voted like lambs for the bill to trigger Brexit, 498 in favor to 114 against. It’s the country that’s divided, disoriented, and afraid.3

The right has long experience of banking on global capitalism while profiting from xenophobia.

Like Trump’s election in the United States and the first round of the presidential poll in France, the Brexit vote smashed the illusion that the politics of the past could be trimmed and stitched to fit the future. The Leave-versus-Remain rift cut across the old left-right axis, setting the global economy’s winners against those left behind and cosmopolitan liberals against pull-up-the-drawbridge nationalists. The right has long experience of banking on global capitalism while profiting from xenophobia. But how does the left position itself across those two related, but not identical, divides? The landscape’s all churned up, and no politician has yet managed to map it clearly.4

So the Tories play on Corbyn’s unpopularity and feed the anxieties that led many to vote for Brexit with dire warnings about a “coalition of chaos,” wrapping an illiberal streak that sees dissent as disloyalty in the usual talk of “strength.” So Labour, lost and fatally supine during the referendum, continues to live in the past, turning the other cheek and proposing progressive policies while studiously avoiding the sore topic of Brexit, which will frame British politics for years to come. May’s harsh robotic mien hides deep uncertainty and a dizzying string of U-turns while appealing to the British penchant for the dominatrix style. Corbyn’s holier-than-thou, too-good-for-politics manner is not just electoral death and parliamentary poison but the eye of a vicious storm that’s tearing Labour to bits. First gutted from the right by the Blairites, Labour is now in the grip of a backlash from its left, which seems more intent on consolidating internal power than on winning elections or mounting an effective opposition.5

Elsewhere in Europe—in France and Spain, for instance—the shifting tectonic plates have begun to throw up new political formations. But here in Britain, the future is being shaped by the old parties’ determination to hold on to their shared monopoly. David Cameron called the EU referendum to contain the Tory right and see off the upstart UKIP; he seems to have succeeded in the second by catastrophically failing in the first.6

On the left, there are some gestures toward a more open politics. The think tank and campaign group Compass has launched a “progressive alliance” to persuade local parties to unite behind the Labour, Green, or Liberal Democrat candidate most likely to hold the seat or defeat a Tory incumbent. Local parties in three constituencies have signed on so far, and there’s interest from more, but the Labour and Lib Dem leadership are, of course, opposed. Working partly in concert and partly at cross purposes with that project, there are also single-issue tactical voting initiatives aiming to block a “hard” Brexit—which includes targeting Labour MPs who campaigned to leave the EU.7

It’s pie in the sky to think that such plans can put more than a dent in the oncoming Tory juggernaut. But they are an invitation to future organizing—and just now, with Labour MPs in once-safe seats fearing annihilation, pulling progressive votes together (though I still mistrust that p-word for its evasive vagueness) seems as good a plan as any. If my imaginary Martian has any better ideas, I would love to hear them.8