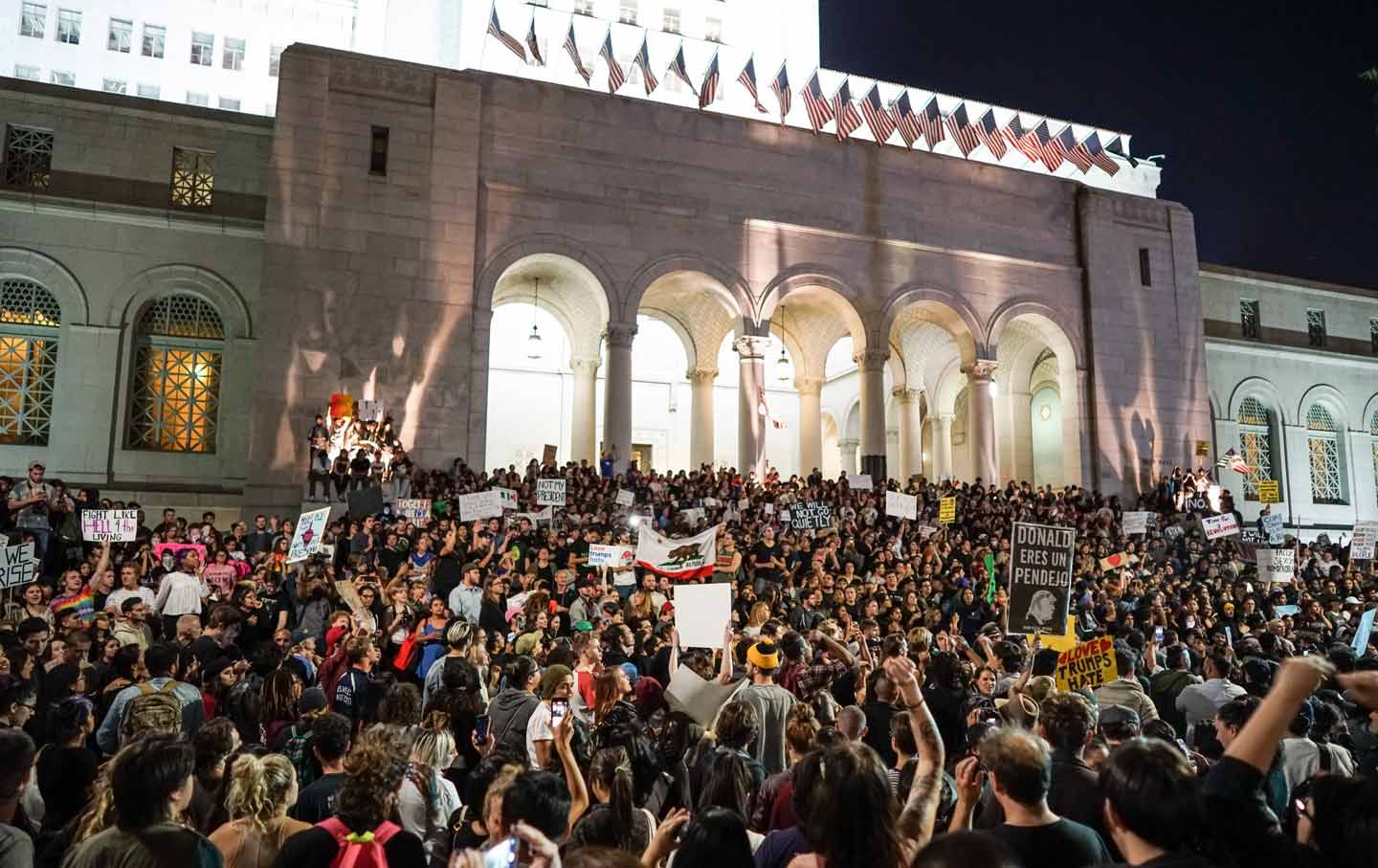 When tens of thousands of protesters on the streets of cities across this country chant “Not my president!” they speak for the majority of Americans who cast ballots in Tuesday’s election.1

Donald Trump has secured just 47.5 percent of the popular vote, and that figure is likely to decline as millions of as-yet-uncounted votes are recorded.2

The combination of votes for Hillary Clinton and various third-party candidates now accounts for 52.5 percent of the relatively small portion of the voting-age population that participated in an election where the turnout was dismal when compared with that of other democracies.3

More significantly, Clinton is defeating Trump in the popular-vote count. And the Democrat’s advantage will grow as outstanding votes from West Coast states that have favored Clinton are tabulated.4

Now the only question is how big a loser Trump will turn out to be. As with so many of the electoral processes of the United States, the systems for counting votes (which differ from state to state) are often absurdly slow. It will be weeks before all the votes are counted, recounted, and reconciled. But because so many of the votes that remain to be counted will come from West Coast states that favored Clinton, the Democrat’s advantage will expand.5

If America aspires to be a democracy, we can no longer allow a centuries-old political structure to warp elections.

This is what we know on the Thursday after the election:6

Hillary Clinton has a 230,000-vote lead over Donald Trump. The Democrat has taken 47.7 percent of the vote, as compared with 47.5 for the Republican.7

In other countries that elect presidents, Clinton would either be preparing to take office or preparing for a runoff election between the top two finishers (as happens in France).8

Trump is preparing to assume the presidency because he is expected to win the most votes in an Electoral College established at the founding of a country that distrusted democracy to such an extent that it did not allow women, people of color, and poor people to cast ballots.9

This is not the first time that a popular-vote loser will assume the presidency. In fact, it is the second time that a Republican loser has become president in less than 20 years—in 2000, Democrat Al Gore defeated Republican George Bush by roughly 540,000 votes, but Bush prevailed with an assist from an interventionist US Supreme Court.10

Americans who object to Trump have a right to assemble and to speak in protest. But their protest should include a systemic complaint.11

Presidential elections should be decided by the popular vote of the American people, not via a convoluted process that assigns the most powerful office in the United States, and arguably the world, to the loser in the balloting.12

If America aspires to be a democracy, no one should be happy with the fact that a centuries-old political structure—established when elites fretted that democracy might threaten the institution of slavery—constrains and warps the process by which presidents are chosen.13

It’s time to do away with the Electoral College and put the voters in charge of choosing presidents, as they are in charge of choosing members of the House of Representatives and the Senate, governors, legislators, mayors, and school-board members. We almost made the change in the late 1960s, after Richard Nixon secured the presidency with just 43 percent of the vote.14

A constitutional amendment, just like those that expanded the right to vote to people of color, women, young people, and those who could not afford to pay a poll tax. Yes, amending the constitution is difficult and demanding. But there is an immediate response that can be embraced. A number of states have endorsed the National Popular Vote initiative that has been promoted by the reform group FairVote, which commits states to respect that popular vote and builds popular support for amending the Constitution to do away with the Electoral College and to ending the absurdity of elections in which losers can become presidents.15