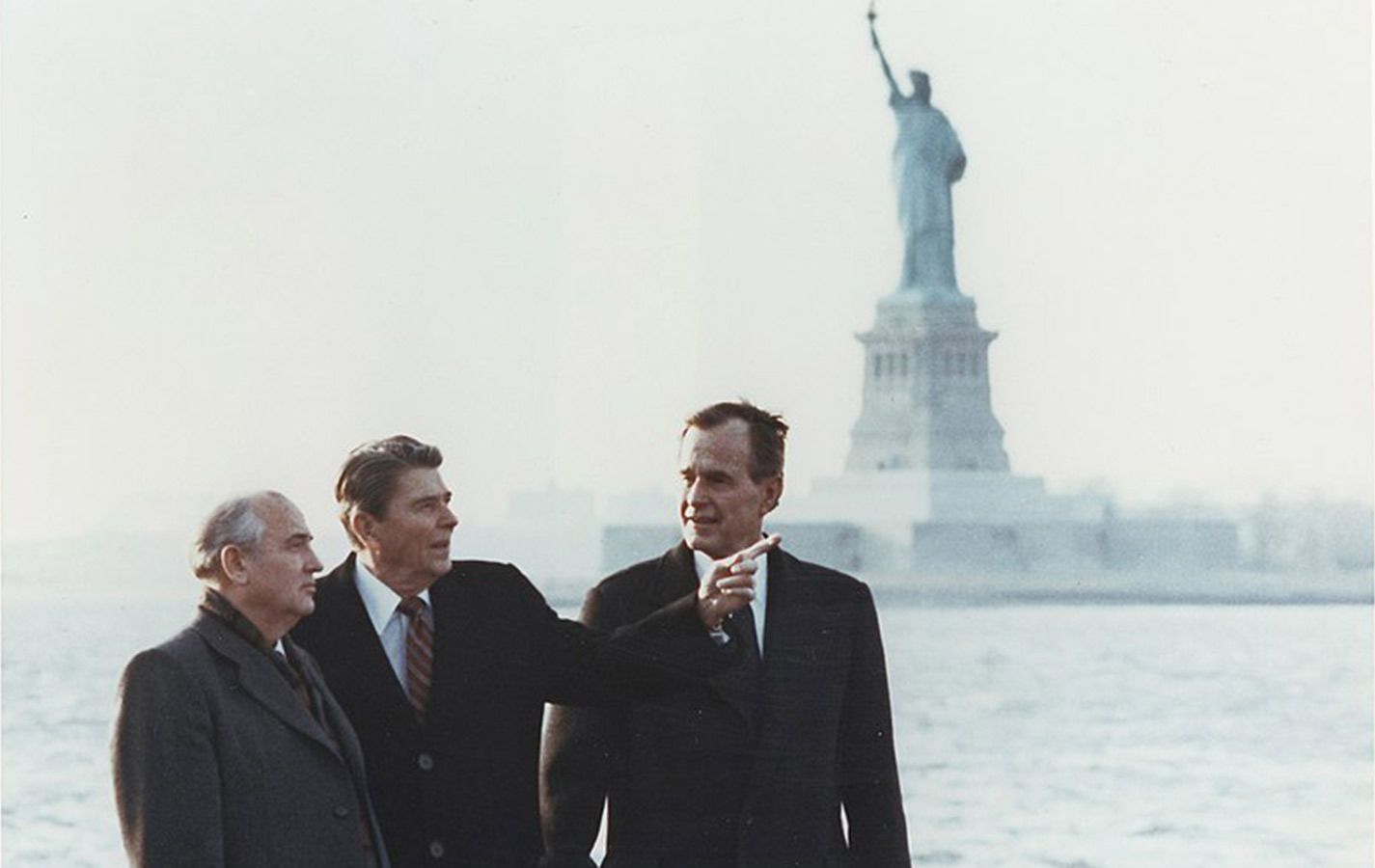 Cohen chose this subject for tonight’s discussion for several reasons. This year marks the 30th anniversary both of Gorbachev’s formal introduction of his democratization policies in the Soviet Union and of the INF Treaty, signed by him and US President Reagan, the first—and still the only—abolition of an entire category of nuclear weapons. In addition, for Cohen, 2017 also marks the anniversary of his first personal meeting with Gorbachev, in Washington in November 1987. Over the years, their relationship has grown into a personal, family friendship, and has included many private discussions about politics, past and present. The most recent discussion, three hours over dinner, took place in late July at a restaurant near Gorbachev’s home, about a 50-minute drive from Moscow. Also present were Cohen’s wife, Katrina vanden Heuvel—publisher and editor of The Nation—and Dmitrii Muratov, editor of the independent Moscow newspaper Novaia Gazeta, of which Gorbachev is a minority owner.

Cohen asked Gorbachev, on this multiple 30th anniversary, whether he felt his legacies, and his place in history, had been lost in light of events since 1987 and especially since he left power in 1991. Gorbachev has addressed variations of these questions many times over the years, often in English translation, as a quick Google search will reveal (and as Gorbachev will do again in a forthcoming book, for those interested in hearing him speak for himself). Now 86 years old and in poor health, but mentally as engaged as ever, Gorbachev reiterated two points he has made before. Regarding democracy in Russia, it is a long process with forward and backward stages, but ultimately inevitable, because several generations of Russians now adhere to the democratic values and principles he advocated while in power. Regarding the new Cold War, he ascribes the largest responsibility to US and European leaders, particularly American ones, who did not seize the opportunity he (and Reagan) left behind.

That evening led Cohen to make the following points in his radio conversation with Batchelor:

§ The situation and perceptions today, certainly in the US political-media establishment, could hardly be more unlike they were while Gorbachev was Soviet leader and shortly after. Hopes for an American strategic partner in the Kremlin have given way to nearly consensual assertions that the current Kremlin leader, President Vladimir Putin, poses a worse threat to democracy everywhere and to US national security than did even his Soviet Communist predecessors. And hopes 30 years ago for a world without Cold War and nuclear buildups on both sides have been vaporized by unrelenting Cold War politics in Washington and by inclinations, both in Washington and Moscow, favoring another nuclear arms race. The alternatives presented by Gorbachev are no longer discussed, or even remembered, lost in a haze of historical amnesia, it seems.

§ Nor is there any meaningful public discussion in the United States of who—how, when, and why—those alternatives were squandered during the past 30 years. To the extent they are discussed, the nearly consensual American explanation is that Putin’s “aggressive” policies abroad and undemocratic ones at home were, and remain, solely responsible. For Cohen, this is a preposterously unbalanced explanation that requires the deletion of many causal factors that unfolded before and after Putin came to power in 2000. Among them, the decision to expand NATO eastward toward Russia after the Cold War had purportedly ended, taken by the Clinton administration; the denouncing of Moscow’s right to a “sphere of influence” on its borders, while NATO’s movement to Russia’s was the largest expansion of a sphere of influence ever in peacetime, an American sphere; President George W. Bush’s unilateral withdrawal from the Anti-Ballistic Missile Treaty, which Moscow had regarded as the bedrock of its nuclear security, and which has led to the current encircling of Russia with missile-defense installments; the West’s “annexing” of Kosovo from Serbia, also under the Clinton administration, which the Kremlin cites as a precedent for its “annexing” of Crimea from Ukraine in 2014; and regime-change policies by several US presidents, from Iraq and Libya to, more surreptitiously, Kiev in 2014, which Moscow vehemently protested and eventually came to see as a potential threat to its own government.

§ None of this is discussed in the US mainstream media, partly because of the exclusion of opposing voices and partly because any Americans suggesting these alternative explanations for the new Cold War are traduced as “pro-Kremlin” and “Putin apologists,” even in progressive publications that once deplored such defamatory discourse. But these responses are no kind of historical or political analysis at all, simply neo-McCarthyite slurring of dissent and, in effect, warmongering.

§ Which should remind us of another great achievement by Gorbachev in the late 1980s, the introduction of glasnost—unfettered journalism and history writing in the Soviet Union—which led to the end of Soviet censorship but also to “more glasnost” impulses around the world, including in the US media. This too seems to have been lost, displaced by secrecy, a pervasive lack of candor, and media malpractice in the United States. What we have been told, and not told, for example, about the allegations of “Russiagate” certainly reflect a lack of glasnost at the top and a lack of willingness in the mainstream media to ferret out anything that does not suggest the culpability of President Trump. Almost everything that fundamentally challenges that mainstream narrative, however well-credentialed, is ignored or maligned, even when put forth by scholars or former intelligence officials now highly critical of their successors.

§ Analyzing the end of Gorbachev’s democratization policies in post-Soviet Russia is a more complex matter. Having set out his interpretation in his book Soviet Fates and Lost Alternatives, Cohen lacks the time here to treat the subject fully, pointing out only that several factors also unfolded before Putin came to power. They included the undemocratic way the Soviet Union was ended in December 1991; the all-but-unprecedented decision by Russia’s first post-Soviet president, Boris Yeltsin, to use tank cannons to abolish a popularly elected parliament—indeed, an entire constitutional order—in October 1993 and to replace it with one with fewer checks on what is now a super-presidency; Yeltsin’s brutal war against the breakaway province of Chechnya; the rigging of his reelection in 1996; and the oligarchic plundering of Russia and attendant impoverishment of a majority of Russian citizens while he was in power. These, and other developments under Yeltsin in the 1990s, are the essential starting point for any analysis of Putin’s role in the reversal of Russia’s democratization initiated by Gorbachev, but for many American journalists the Yeltsin 1990s remain a rose-tinted period of “democratic transition” and US-Russian solidarity.

Cohen and Batchelor end by asking whether Gorbachev’s lost alternatives are still retrievable. Both are pessimistic. We are probably closer to actual war with Russia today than ever before in history. President Trump, who seemed to want to reverse bipartisan US policies that contributed so significantly to the new Cold War, is said to have been defeated or dissuaded in this regard by “adults,” who themselves represent those previous policies. (Cohen points out that, despite fierce and powerful resistance at home, Gorbachev withdrew Soviet forces from Afghanistan, while Trump, who says he was initially inclined to withdraw US forces after 16 years of futile war there, did not choose the Gorbachev alternative.) The absence of public debate, and the lack of glasnost in the mainstream American media, further encourages some silent opponents of Washington’s Cold War policies to remain silent, both in the media and in Congress. Cohen thinks, as he has said before, that Western Europe may, for various reasons, eventually rebel against Washington’s determinedly anti-Russian policies and adopt its own approach to Moscow. But time is running out. Transformational leaders, Cohen also thinks, are often inspired by historical examples. Gorbachev and Reagan provide only one, but a highly relevant, such example. On the other hand, Trump no longer seems to be such a leader, despite his earlier promises to “cooperate with Russia.” But for Cohen, hope dies last, and he has not yet fully excluded the possibility that this aspiration, however thwarted by the yet unproved allegations of Russiagate, is still alive in the White House. And there is the mounting imperative of a new policy dictated by the woeful realities of ever worsening US-Russian relations.

Meanwhile, Gorbachev, having lived long beyond his greatest achievements, watches and hopes, however faintly.

PS: Cohen and Batchelor noted—but, not having had time to read, did not discuss—the just-published biography of Gorbachev by the eminent biographer and Russia scholar William Taubman. This major study is certain to provide new information about and perspectives on Gorbachev as a man and as a now historical leader.