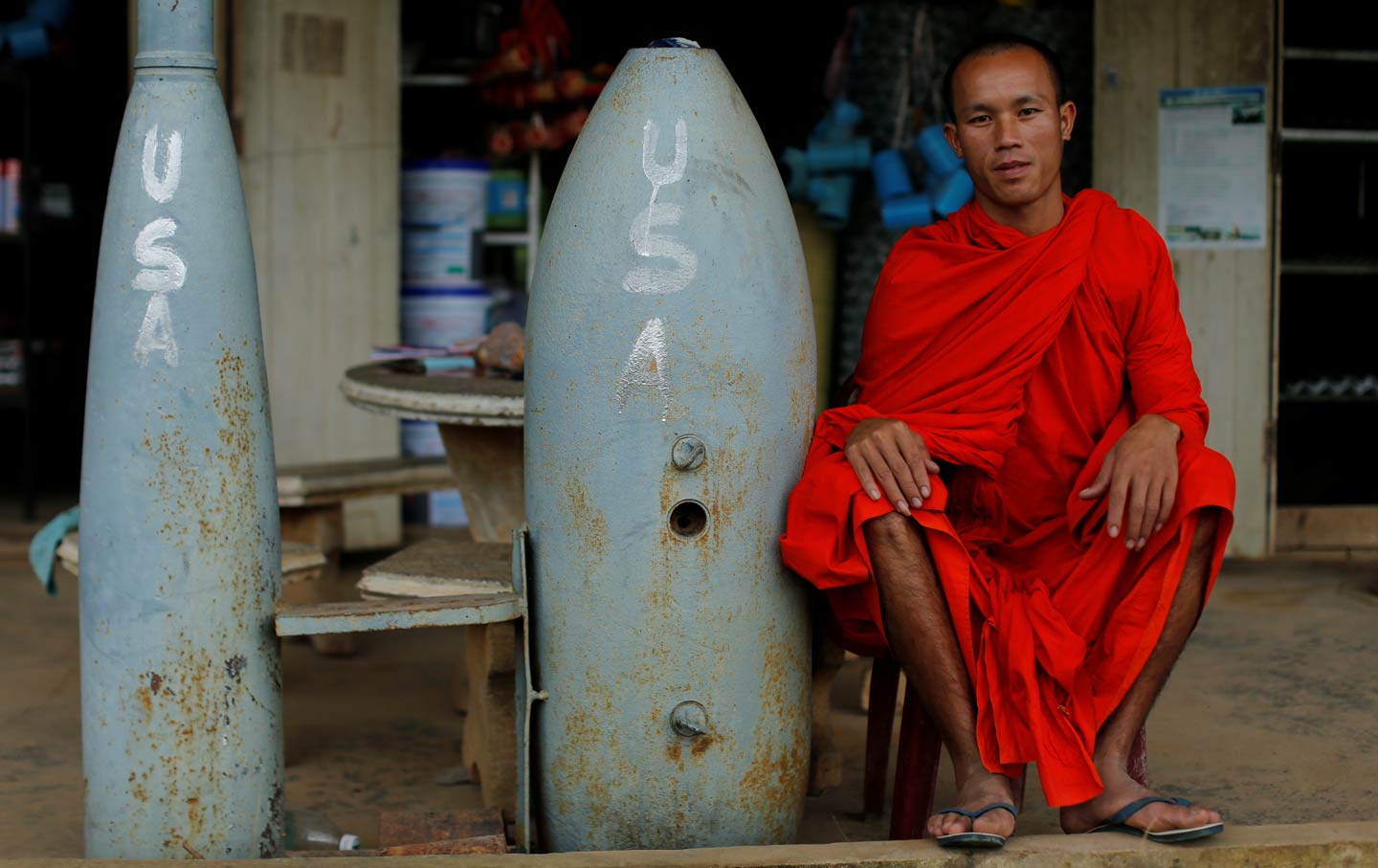 Fifty-two years ago, the United States began the secret bombing of Laos, a tiny country whose only crime was geographical. It bordered Vietnam, and the US military wanted to stop the movement of Vietnamese soldiers and supplies through Laos.

Out of the sight of Americans, Laos became the most heavily bombed country per capita in the history of warfare.

A surprising number of the bombs—about 30 percent—never exploded, and they are still killing and maiming Laotian farmers today. But, thanks to the work of a committed group of modern-day heroes, led by a young Laotian-American, President Obama just announced that the United States will devote $90 million over the next three years to finding and disposing of those remaining bombs.

I learned about the secret bombing of Laos during two stints as an intern in Washington at the Indochina Resource Center. The cnter was started by Fred Branfman, who had been a volunteer in Laos during the bombing, and it became a key resource center of the anti-war movement. In the Plain of Jars area where Fred was stationed, every single person of the roughly 50,000 who lived there in 1964 was either killed by the bombs or turned into a refugee. Fred went to the refugee camps in 1970 and urged people to draw pictures of the bombing and write down their stories. He published these drawings and stories in the book Voices from the Plain of Jars in 1972 and returned to Washington to tell the story that no DC official wanted to hear.

The Vietnam War ended in 1975, and Laos was largely forgotten in this country. Fred went on to other vital work and left the originals of the drawings by Laotian refugees at the Institute for Policy Studies (IPS), a group that had been at the center of research and activism against the war. After I came to work at IPS in 1983, I found the drawings in our storage space, and I put them in an honored place on my bookshelf.

In 2003, a young woman came to visit me from the Ford Foundation. Channapha Khamvongsa was born in Laos, left for the United States at a young age, and was deeply interested in her country. We talked at length about Laos. Before she left, I showed her the leather binder that held the drawings and stories that Fred had gathered.

I urged Channapha, once she left Ford, to start an organization that could use the drawings to educate people in this country about the bombings, the war, and the people who continued to suffer from the bombs that didn’t explode. With Fred’s blessing, I gave the binder to her.

So I was not surprised when, soon after, Channapha founded Legacies of War and began to tour the drawings along with other educational materials across the United States. As she continued her work, she discovered the horrible statistics about Laotian farmers’ still being killed and maimed in large numbers a half-century after the bombings. She began to campaign to get the US government to authorize funds to find the unexploded bombs and dispose of them. She started a petition drive. She enlisted former US ambassadors to Laos. She walked the halls of Congress. Thousands of times, she retold the story of the Plain of Jars.

Bit by bit, she won over members of Congress. The money started to pick up for the clean-up. It wasn’t enough, but it was a start.

Like with almost all nonprofits, despite the amazing cause, it was hard to raise funds for Legacies of War, and it remained a one-person operation with a dedicated board until just this summer, when Channapha hired a second staff member. When I think of indominitable spirit, I think of Channapha.

That leads us to today. With President Obama’s historic pledge of $90 million, the clean up will accelerate, and we will finally see the day when no more Laotian farmers get killed by US bombs. Fred Branfman, who died a few years back, would be dancing in the streets. Channapha and her team of heroes have taught us that perseverance in the face of injustice can prevail.