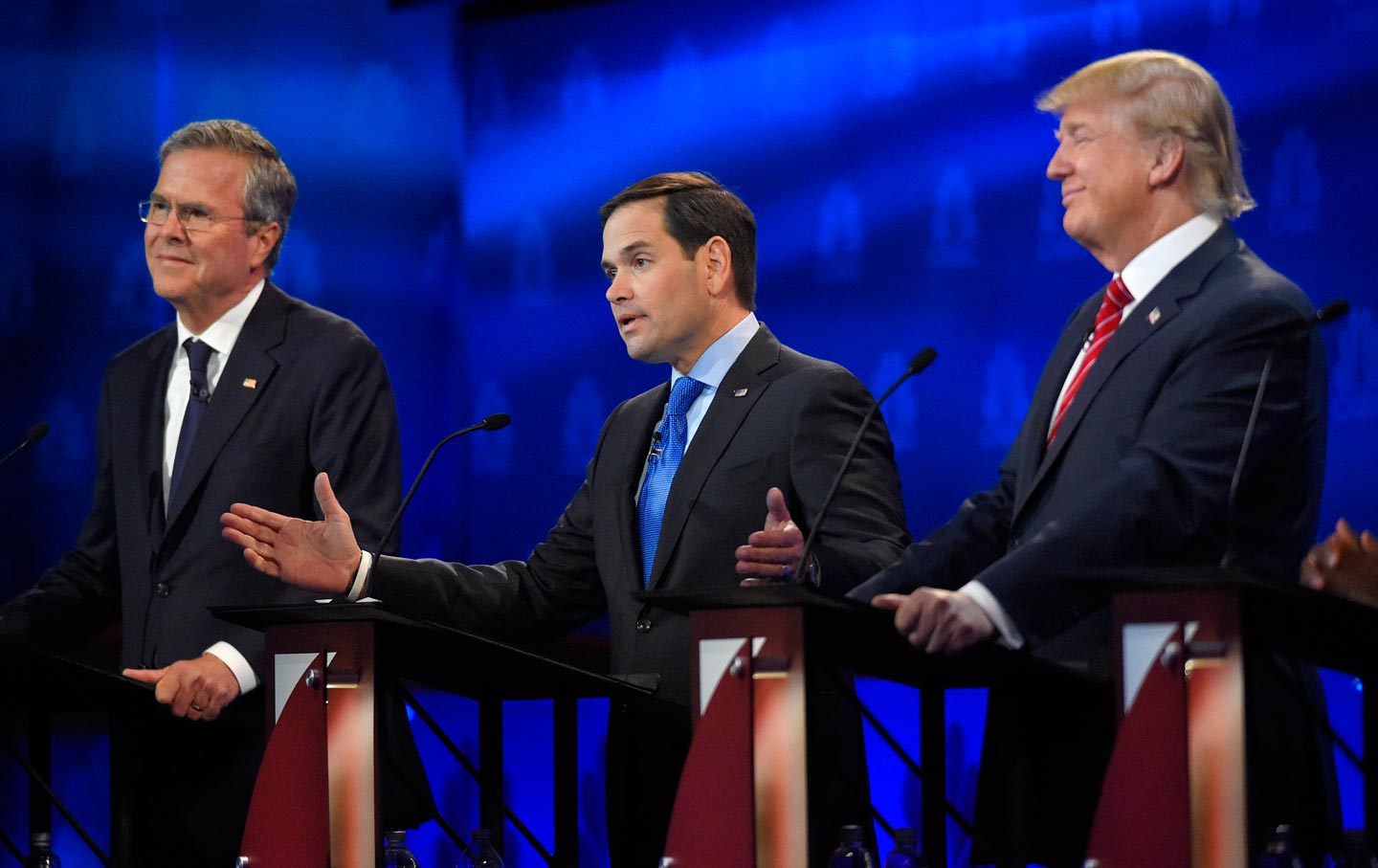 After Mitt Romney’s defeat in 2012, Republican National Committee chair Reince Priebus performed an oddly but aptly named “autopsy” designed to avoid a rerun of that year’s debacle, when freak-show candidates competed in 20 presidential debates, a Senate candidate opined alarmingly about “legitimate rape,” and Romney himself suggested that tightening the screws on “illegal immigrants” might get them to “self-deport.”

To court Latinos and younger voters, Priebus and his advisers urged Republicans to tackle comprehensive immigration reform and tone down the anti-gay rhetoric. They offered sessions to teach candidates how to talk to and about women. And in February of this year, Priebus boasted of his proudest achievement yet: He had done “exactly what I wanted to do…taking control of the presidential primary debate process,” he told radio host Hugh Hewitt.

Priebus had trimmed the debate schedule from 20 to between nine and 12, and he found those debates friendlier homes. Hewitt and his home base, the right-wing Salem Radio Network, would co-sponsor three debates with CNN, and conservative clubhouse Fox News would have another three. The “liberal” MSNBC, which had sponsored GOP debates in 2008 and 2012, was axed in favor of pro-business CNBC. NBC News got a debate, but it was tethered to National Review, to make sure the candidates saw a friendly face.

Poor Reince Priebus! All of his efforts weren’t enough. His debate wrangling was intended to thwart the candidacy of polarizing outsiders who have little chance of winning a general election. But how can you depict your party as the victim of a hostile takeover by figures like Donald Trump and Ben Carson, when together they’re supported by a solid majority of Republican voters in virtually every poll?

Meanwhile, the candidates have revolted. After the October 28 CNBC debate, representatives from the warring Republican campaigns got together to wrest control away from the RNC. But the fracas only highlights the GOP’s fundamental problem. More than 50 years after GOP leaders began their cynical tilt toward angry white voters, the party is reaping what it has sown: a base that’s consumed by fury, not just at Democrats but at Republicans who have made and broken promises over and over again.

From 2009 on, the party’s leaders have either peddled or tolerated the notion that Barack Obama is an illegitimate president who wasn’t born in the United States—and now Trump, the 2012 birther-in-chief, has been leading the pack most of this cycle. GOP leaders promised to repeal Obamacare, take the debt ceiling hostage to force budget cuts, and slash taxes without inflating the deficit. They accomplished none of this. Now they wonder why their base is so enraged.

Like Priebus, the two leading establishment candidates in the race—Jeb Bush and Marco Rubio—at least recognize that the party’s reliance on aging white voters will eventually doom it to demographic extinction, especially in national elections. They just haven’t had the fortitude to do anything about it. Bush, for example, has said that the next Republican nominee would have to defy the GOP’s base at times: “to lose the primary to win the general [election]” is how he put it. Yet in September alone, Bush went from defending his decision to speak Spanish on the campaign trail—“This is a diverse country. We should celebrate that diversity”—to asserting that “we should not have a multicultural society.” Likewise, Rubio joined the so-called Gang of Eight and helped craft a bipartisan, comprehensive immigration bill that easily passed the Senate. But when the right rebelled, he turned on his own bill and urged the House not to pass it. Still, the party’s anti-immigration base distrusts Rubio, as well it should.

And so, stymied on the policy front, party leaders have tried to tinker with the primary rules, the debate calendar, and now the debate moderators. Trying to head off the candidate revolt, Priebus suspended the NBC-Telemundo debate scheduled for February, though he insisted the debate would go on with National Review and a broadcaster to be named later. Tellingly, Bush representatives insisted on the inclusion of Telemundo, although the immigrant-bashing Trump predictably said no. I was hoping Bush would threaten to walk away if Telemundo was excluded—but no, it was The Donald, the television brand, who told the other candidates “See ya!” and set off to negotiate his own deal with the networks.

All of the wrangling over optics, however, won’t prevent another 2012. The trouble isn’t the debates, or the candidates; it’s the party’s rage-addicted voters. Republicans need some new ones, but given their policies and their determination to kowtow to their base, that’s going to be a long time coming.