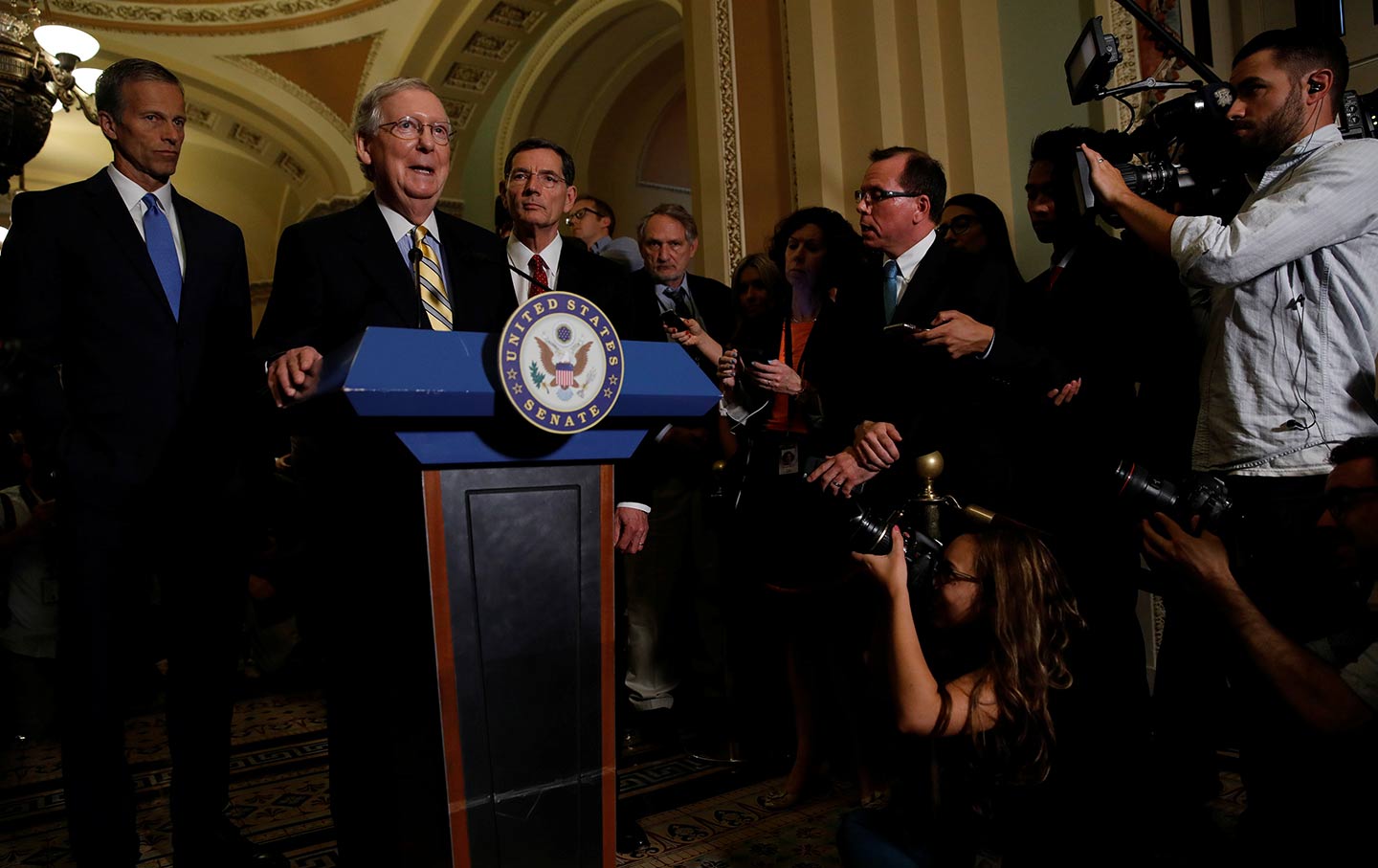 The malice in the Republican Party’s plan to overhaul the Affordable Care Act was on full display in Senate majority leader Mitch McConnell’s office on a recent morning, when Capitol Police officers began dragging disabled protesters out of their wheelchairs and arresting them. It was a  perfect, if grotesque, metaphor for the legislation and the process that produced it—written behind closed doors, with the public locked out.

Now we know why McConnell kept his bill hidden. Much like the legislation that passed the House of Representatives in May, the Senate’s bill is a jumble of tax cuts and a butchering of Medicaid disguised as a “fix” for Obamacare. The Center on Budget and Policy Priorities estimates that the 400 highest-income taxpayers would receive $33 billion in tax cuts—an amount equivalent to what Alaska, Arkansas, West Virginia, and Nevada spend on the ACA’s Medicaid expansion, which covers more than 725,000 people and would end under the Senate plan. In other words, Republicans are willing to scrap coverage for three-quarters of a million poor people in exchange for tax cuts for a few hundred of America’s wealthiest citizens.

Remember the Republican furor when it turned out that, under Obamacare, not everyone could keep their doctor? After complaining bitterly about the government’s intrusion in the market then, Republicans are pushing a bill that will cause massive disruptions in coverage, insurance markets, state budgets, nursing homes, and rural hospitals. Within the next decade, according to the Congressional Budget Office, the bill will increase the number of uninsured Americans by 22 million—with 15 million losing coverage by the midterm elections next year. Under normal circumstances, that alone would be political suicide. The Senate bill whittles down the subsidies offered to people buying insurance on the exchanges, which means higher out-of-pocket costs and deductibles. “Few low-income people would purchase any plan,” the CBO predicts. The bill also leaves people in some counties with no options for buying insurance on the individual market, or with grossly expensive premiums. A 64-year-old earning $56,800 a year would go from a premium of $6,800 to paying $20,500.

Even that fails to capture the full scale of the damage this bill would inflict due to its transformation of Medicaid. Changing the federal government’s contribution to state Medicaid programs from open-ended reimbursement to a system of block grants would leave states to fill the gap—or cut people from the rolls. This is both cruel and nonsensical: None of the flaws that the GOP finds in Obamacare have anything to do with Medicaid, which is both popular and effective.

Republicans can’t defend this plan, so instead they’re lying through their teeth about it. Speaking on CBS’s Face the Nation, Pennsylvania Senator Pat Toomey claimed that the bill would “codify and make permanent the Medicaid expansion.” White House adviser Kellyanne Conway insisted on ABC’s This Week that the $800 billion in Medicaid cuts “are not cuts to Medicaid” and merely “slow the growth for the future.” Speaking after Conway, Senator Susan Collins of Maine offered a welcome bit of honesty: “I respectfully disagree with her analysis. The Senate bill is going to have more impact on the Medicaid program than even the House bill.”

Confronted with a handful of GOP defectors refusing to vote for the bill in its current form, McConnell delayed the vote until after the July 4 recess. But that doesn’t mean the bill is dead. Recall the aborted House vote to repeal Obamacare in April: After House Speaker Paul Ryan abruptly called it off, reports that the GOP had given up on health-care reform for the rest of the year helped to cool the protests dogging Republican members and allowed the caucus to quietly reassemble. Republicans in Congress may not like their own health-care bill, but they’re all looking for a way to vote yes. Now it’s up to their constituents to block their path.