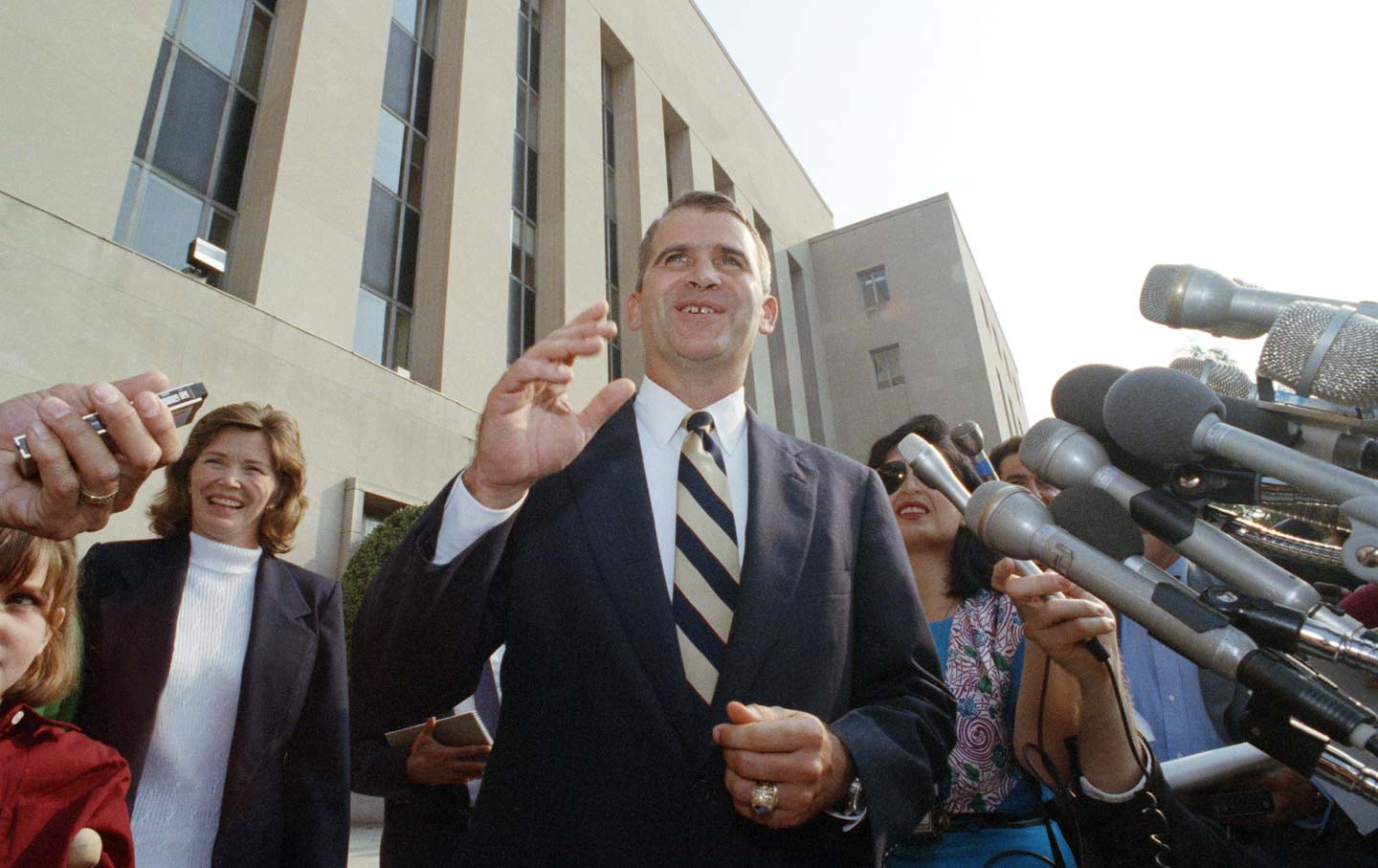 Apropos of Hillary Clinton’s forever e-mail problems, it’s worth marking the approach of the 30th anniversary of the very first government electronic-mail scandal. On Friday, November 22, 1986, Oliver North sat down at his National Security Council computer and began deleting e-mails related to Iran/Contra, the far-reaching conspiracy in which North, along with others in Ronald Reagan’s administration, traded high-tech missiles to revolutionary Iran, diverting the proceeds to fund the Nicaraguan Contras, in violation of Congress’s Boland Amendment. North, with the scandal about to explode in the press, deleted about 750 e-mails from his “notelogs.” North’s boss, the head of the NSC, John Poindexter, deleted another 5,012.

The other day, Peter Van Buren, a 24-year career officer at the State Department, provided a fascinating firsthand account of the very late adoption of e-mail by the department. Well past 2000, State was still using an old Wang mainframe and barely had the ability to send e-mail out of department. The White House, in contrast, was using e-mail as early as 1982, using an IBM application called PROFS (PRofessional OFfice System). PROFS had no “select all,” “delete all” function. So, in addition to the paper documents that needed to be shredded, and the other records smuggled out of the office in Fawn Hall’s boots, North and Poindexter had to sit at their respective terminals and delete each message individually. A massive amount of information was destroyed that weekend.

Since e-mail was so new, North and Poindexter presumed that the communications weren’t subject to either the Presidential Records Act or the Freedom of Information Act. They thought they had a secure back channel to organize the many different tentacles that comprised the Iran/Contra octopus: not just trading arms with Iran, but raising money from various domestic (including Ross Perot!) and foreign (such as the Sultan of Brunei, Saudi “princes,” and Colombian drug traffickers) sources to support a myriad of off-the-books covert operations, including running an illegal propaganda campaign within the United States to isolate critics and build support for Reagan’s foreign policy.

The digital ether, however, was a short-lived covert utopia. Career service officers in charge of recycling the White House’s magnetic backup tapes, learning of the various crimes being committed in the Reagan White House, handed the tapes over to the FBI. In subsequent years, the e-mails that North and Poindexter thought they had destroyed were used by the various Senate, House, and independent-counsel investigations into Iran/Contra, including Senator John Kerry’s inquiry into the use of drug traffickers. Poindexter was convicted of conspiracy, destruction of records, and obstruction of Congress, among other charges; North, of altering and destroying documents.

Both men, along with all others convicted in Iran/Contra, were pardoned by George H.W. Bush. Just after 9/11, Poindexter, who has a PhD from CalTech, would make a brief public comeback, after years in the private defense sector, as director of George W. Bush’s short-lived Information Awareness Office, which in those innocent pre–Edward Snowden days was much ridiculed for its Orwellian mandate to “turn everything in cyberspace about everybody—tax records, driver’s-license applications, travel records, bank records, raw F.B.I. files, telephone records, credit-card records, shopping-mall security-camera videotapes, medical records, every email anybody ever sent—into a single, humongous, multi-googolplexibyte database that electronic robots will mine for patterns of information suggestive of terrorist activity.”

This first e-mail scandal had long legs, and links up to Clinton’s e-woes in various ways. Just as the Reagan presidency was about to come to an end, the National Security Archive, a nonprofit based in Washington, DC, sued to prevent the administration from deleting roughly 7 million e-mails. This was the beginning of bringing the digital dominion under the sovereignty of the Freedom of Information Act and the National Archive and Records Administration, creating the public oversight that Hillary Clinton, in setting up her private server, apparently tried to bypass.

The lawsuit dragged on for decades, in various forms, with not just the Reagan and George H.W. Bush administrations arguing for the right to destroy e-mails, but Bill Clinton continuing the fight. On a procedural level, what was at stake in Iran/Contra was the running of the NSC as a rogue, independent outfit not subject to oversight. Conventional wisdom has that ending with the exposure of Iran/Contra. But in a way, the Clinton White House continued to fight for the principle, arguing in 1994, against the National Security Archive’s suit, that the NSC, as David Gerwirtz writes in his Where Have All the Emails Gone?, was “not an agency” and “therefore is not subject to Freedom of Information Act regulations.”

The National Security Archive won on a number of points related to its original lawsuit, as it applied to Iran/Contra. But in some ways, the case continues on, with as many legal tangents as the Amazon has tributaries, tied up in the new secrecy justified by the endless “war on terror.” You can read about it here, here, and here.

Government operatives have other ways, besides deleting e-mails and using private servers, to keep secrets. Henry Kissinger, for instance, “rarely put anything on the record in normal diplomatic channels if he could devise a more secretive back channel,” according to a sympathetic biographer. Kissinger himself admitted that what he did write down might often be a smokescreen. Historians, he wrote in one of his memoirs, have “no criteria for determining which documents were produced to provide an alibi and which were genuinely guided decisions.”