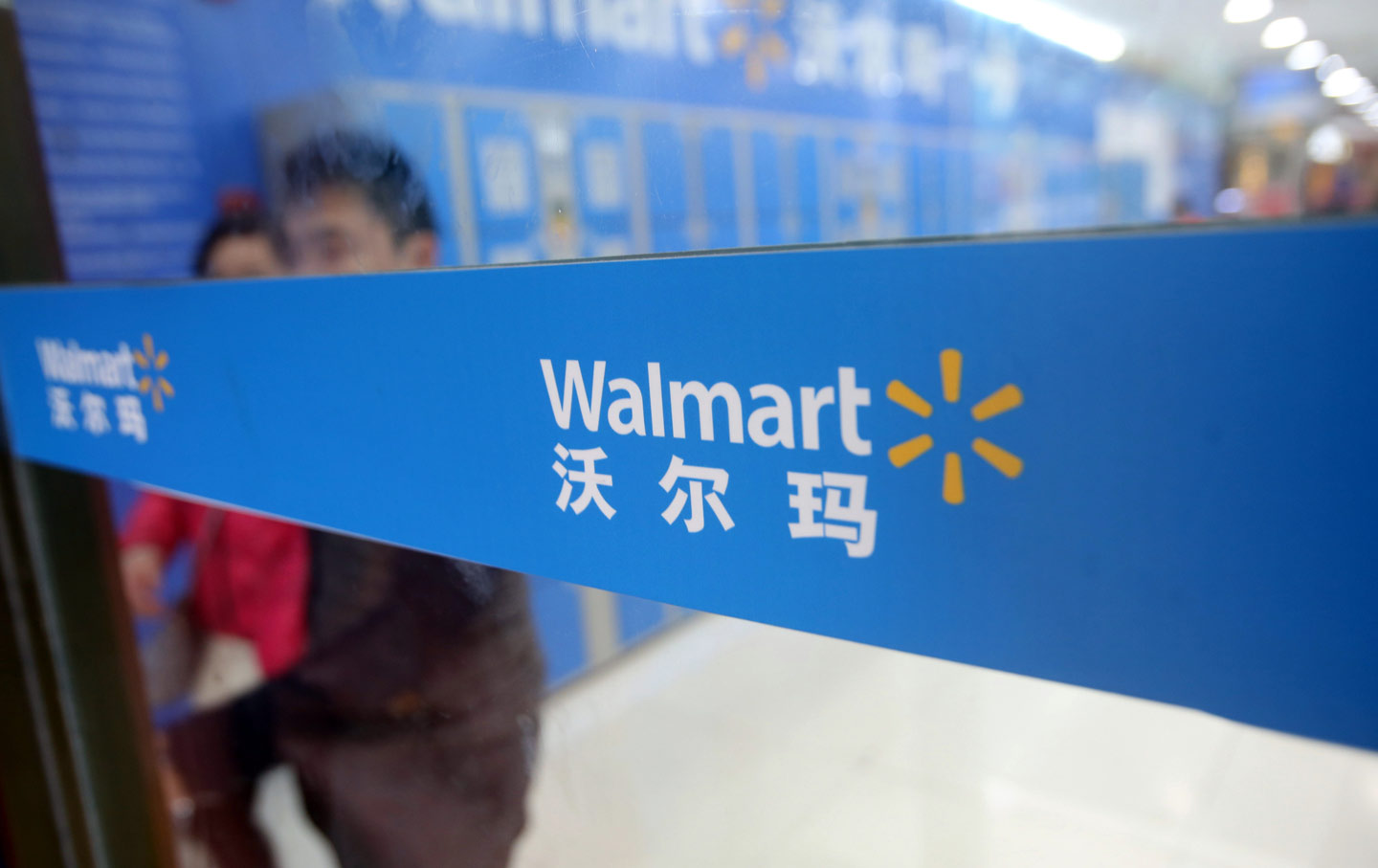 Customers exit a Walmart supermarket in Shanghai on January 18, 2016. (Imaginechina via AP Images)

On the retail empire’s home turf in Bentonville, Arkansas, workers gathered at a media conference organized by the advocacy network Making Change at Walmart, to denounce Walmart’s low wages and hostility to labor organizing.

Margaret Hooten of Placerville, California, who earns less than $11 an hour after starting at $9 five years ago, lamented, “Walmart can afford to pay its workers, they just won’t. They don’t care. It is corporate greed in its lowest form.”

Zhang Jun helps lead the fledgling Wal-Mart Chinese Workers’ Association (WCWA), an independent group that pushes for many of the same reforms US Walmart workers seek, like job security and real collective bargaining rights. But there’s one difference: In China, Walmart is a union shop. Sort of.

The All-China Federation of Trade Unions (ACFTU) nominally represents all of China’s workers, via a latticework of regional labor bodies along with workplace-level locals. In actuality, the ACFTU’s leadership is often aligned with Communist Party officialdom and corporate management rather than workers. Walmart negotiated to allow the ACFTU to establish local branches at mainland stores in 2006, but grassroots labor advocates say the unions have so far done little for workers other than suppress unrest.

Activists like Zhang Jun are part of an increasingly militant rank-and-file movement, which runs a loose network of about 5,000 Walmart workers across China, organized through social media, and has forged ties with labor advocates in Hong Kong and even the United States, with an open letter expressing solidarity. Though Walmart’s China operations count for just 3 percent of global retail sales (contrasting with China’s outsized manufacturing role in Walmart’s supply chain), they employ more than 100,000 workers at 433 outlets in 169 Chinese cities.

The Walmart brand itself turns out to be an ideal organizer. The plans to introduce “flexible” schedules as part of a workforce “optimization” program have galvanized workers’ anger across China, along with rising fears of labor deregulation.

Zhang Jun tells The Nation that under the initiative, workers would face intensified workloads and be deprived of legal recourse to challenge unfair schedule policies in the civil legal system. The destabilization of working conditions would “potentially make workers more fearful and less assertive in voicing their concerns on various grievances in terms of organizing unions,” he adds.

Walmart in China contends the “flexibility” initiative has “support from the majority of employees,” but it would “maintain open communication with” others “who are temporarily unable to understand,” reports The Sixth Tone. Walmart Corporate representative Marilee McInnis states via e-mail that the system “will enable Walmart to execute strategic talent management.”

But worker-turned-activist Zhang Liya says via e-mail that the plan was unilaterally imposed with virtually no worker consultation except among top union officials. Although “labor law requires companies to submit its [planned] change and seek approval,” he argues, the company has instead “coerce[d] workers.”

Zhang Liya is familiar with such coercion in his former workplace, store 1059 in the southern city Shenzhen, where he tried last winter to launch an insurgent campaign for president of his local. He gained broad support with a social-media campaign decrying a sclerotic union leadership that failed to defend workers’ job security. According to labor activists, the management reacted by systematically pressuring coworkers not to support his bid and suggesting his campaign was a product of “foreign interference.” In a speech, Zhang Liya lashed out at the management, calling their tactics “a violation of Walmart’s corporate culture.”

Zhang Jun, who has also left Walmart but continues to organize workers, has launched a scathing online petition to oppose the scheduling reforms and to demand more democratic union elections for direct collective-bargaining representatives.

This time, the organizers have won the support of local leaders with Shenzhen’s ACFTU branch. Provincial vice chair Wang Tongxin told fellow union officials, “We should listen to the workers’ demands and bring those demands to the higher-level unions,” according to a May report by Hong Kong-based China Labor Bulletin.

But Zhang Liya recalls that during Walmart’s first decade, 1996 through 2006, “Walmart workers were fortunate…. Workers’ salaries were more than three times of the average salaries in Shenzhen.” Since then, however, “after management controlled Walmart unions’ election, salaries and benefits have gone down year after year, and salaries are now only 30 to 40 percent of the average incomes in Shenzhen.”

China’s workers are demanding more nationwide, as average salaries for urban workers have nearly doubled since 2004, particularly in high-cost boomtowns like Shenzhen. Even the city’s monthly minimum wage has risen steadily, while Walmart’s pay scales have apparently failed to keep up with overall growth.

Though allowing nominal unions at Walmart raised faint hopes of genuine labor empowerment, Zhang Jun says, “currently the union just sort of agrees to whatever management decides in terms of firing workers,” and fails to protect workers from retaliation for organizing. Though WCWA doesn’t advocate forming a full-fledged breakaway union, it is urging ACFTU leaders to follow its mandate and enable workers to directly participate in “collective bargaining on equal terms with management.”

While Beijing may covet Walmart’s retail business mode as a symbol of China’s new prosperity, from a labor perspective, American big-box stores are hardly a model to emulate. In an open letter to Walmart and fellow workers, Zhang Jun noted the struggles of the Fight for 15 campaign marks a troubling harbinger for China’s workforce. “We have reasons to believe Walmart China will follow the US example to adopt the system of [flexible] hourly workers completely, and the current Flexible Working Hour Scheduling only prepares for the transition.”

Could an emerging global Walmart labor culture form a transnational front against Walmart’s corporate culture? Perhaps workers like Margaret Hooten would never have thought US Walmart would drag down Chinese labor standards in the “race to the bottom,”’ or that Chinese workers might offer lessons in organizing. But whatever the bureaucratic constraints, WCWA’s growing militancy just might inspire the US counterparts who struggle to coordinate one-day strikes, store by store.

So maybe Walmart’s Chinese incarnation isn’t just a sign of globalization of a corporate hegemony, but of an incipient globalized rank-and-file movement, purpose-built for a shrinking world.

Special thanks to Kevin Lin and China Labour Bulletin for assistance with research for this article.