Lulu Wang’s The Farewell. (Courtesy of A24)

The fact that films about Asian Americans still feel rare and revelatory is a reflection of Hollywood’s lumbering progress. Last year Jon M. Chu’s Crazy Rich Asians was the first US studio picture with a primarily Asian cast since Wayne Wang’s 1993 adaptation of The Joy Luck Club. For 25 years, Asian American stories were kept on the margins of mainstream stories, and the diversity and complexity of Asian American experience has never been fully captured by Hollywood. (Recently, Asian characters’ roles were even given to white actors like Emma Stone, Scarlett Johansson, and Tilda Swinton.)

The Farewell—writer-director Lulu Wang’s sophomore feature—also stars a mostly Asian ensemble and arrives in much quieter form during today’s nascent resurgence in Asian American cinema. The Farewell may lack a flashy story line, but its microcosmic focus provides a familiar encapsulation of an immigrant experience that will certainly speak to many: an exploration of what family life looks like when a person’s identity is divided between two far-flung places, two disparate homes. Although the trajectory is not exactly the same for all immigrants, to see that kind of displacement articulated on-screen is invaluable.

The film—“based on an actual lie,” according to its tagline—was inspired by the filmmaker’s life and her family’s handling of her grandmother’s end-of-life care. Wang finds her surrogate in the character Billi, a millennial Chinese American woman played by rapper-turned-actress Awkwafina (aka Nora Lum). Usually the punchline-carrying staple of recent studio films (Ocean’s Eight and Crazy Rich Asians), Awkwafina finds her footing as a first-time leading lady, excelling with her emotionally nuanced and vibrant performance in a story about familial love and the gray area one cultivates from straddling different homelands (New York City and Changchun, China, in this case).

The film opens with Billi, a struggling Brooklyn writer, on the phone with her grandmother, Nai Nai (Shuzhen Zhou), the two slipping white lies to each other without much thought or guilt. Nai Nai warns Billi against wearing earrings—because in New York people will “rip them out and then you have to go to the hospital for surgery”—and Billi, in earrings and a nose ring, assures her that she is not wearing any. (Nai Nai’s concern about New York’s being a dangerous place is a familiar tune; older relatives of mine from South Korea had similar notions of the Big Apple as a criminal metropolis.) The grandmother lies to Billi, too, saying she’s at her sister’s house when in fact she’s at a hospital, awaiting diagnosis. But neither of these is the lie the film revolves around; the big lie is the one told to Nai Nai after her hospital visit. Though she is terminally ill with stage IV lung cancer, the family members decide to tell her she’s perfectly healthy and has nothing to worry about. Ethics of that fib aside, this is accepted as a perfectly normal Chinese way to worry on behalf of the ill. (It is later revealed that Nai Nai did this to her husband before he died.)

Billi, who moved to the States at a young age and is mostly Westernized in her thinking and living, is the audience’s stand-in for the cross-cultural moral dilemma the lie presents. She is conflicted because it seems somewhat cruel to keep Nai Nai in the dark. (After all, it is illegal in the United States for medical professionals to lie to patients about their diagnoses.) And like any good granddaughter, Billi wants to give Nai Nai a proper goodbye. Although they live an ocean apart and barely see each other—even when all we’re given early on is a brief, semi-dishonest phone conversation—it’s obvious Billi and Nai Nai are protective of each other’s feelings. 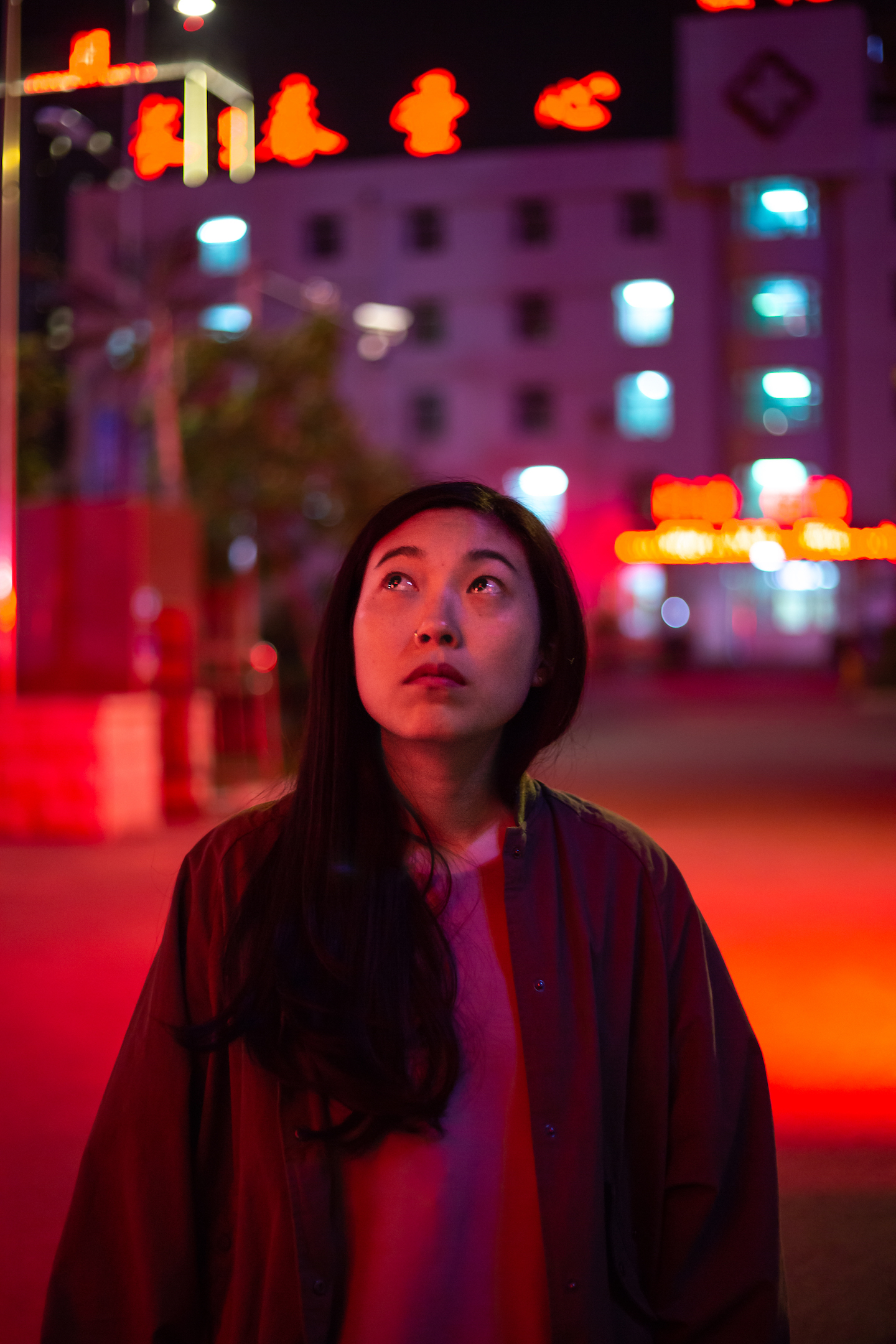 Awkwafina (aka Nora Lum) in The Farewell. (Courtesy of A24)

So Nai Nai’s children and grandchildren go through elaborate lengths to wish her farewell without burdening her with the knowledge of death: They mask the titular farewell in a wedding, expediting the courtship between Billi’s cousin Hao Hao (Han Chen) and his Japanese girlfriend Aiko (Aoi Mizuhara) of three months. Aiko remains confused about the whole ordeal for basically the entirety of the film—as if she’d been thrown into a reality show sans premise. In fact, it’s unclear how much she does and does not know. The joke is built on her language barrier with the rest of the family, but it really shows only what a terrible communicator Hao Hao is. (He speaks Japanese.) In a film that otherwise handles the drama and the lightheartedness with impressive ease, this clumsy gag is one that feels out of place.

Otherwise, Wang does a fantastic job not letting the film become too heavy-handed; under a less attuned director, the morbid through line combined with the presence of the loud-mouthed Awkwafina would have tipped the film too much one way or the other. There is a quiet resignation with which Billi takes in present-day Changchun, which has changed from the home she remembers. But most of all, that delicate balance is achieved through Zhou’s and Awkwafina’s bittersweet showings. Awkwafina’s performance hinges on Billi’s inability to put on a poker face. Even at the beginning of the trip, when Billi helps make dumplings, her mood is morose. One begins to wonder if Nai Nai pretends not to notice to protect her granddaughter’s feelings in turn. It’s not explicitly addressed, but the film hints that their bond runs deeper than we can see.

For a woman on her last lifeline, Nai Nai is full of joie de vivre. Her dumpling-making skills haven’t waned, and she takes charge of the wedding planning, from photo shoots to arguing with the venue about getting cheated out of the previously promised lobster menu. It’s surreal watching someone so energetic who is ignorant of her failing health. Maybe she really is in the know.

Wang initially told this story—about her own grandmother—in 2016 on a This American Life podcast episode titled “In Defense of Ignorance.” She tried to get the film made before that, but was met with obstacles. In a recent Vulture profile, Wang recalls that her story was neither Chinese nor American enough for producers and that she considered compromising her initial vision for a romantic story line, as an investor suggested. She could have gotten the film made sooner, but instead she waited for the right opportunity. (Big Beach Films eventually produced after the This American Life episode built momentum.) Billi’s entire mode of operation in this unique predicament is predicated on her Asian American identity, and it’s hard to see how the story would have stayed to Wang’s liking had she listened to the early potential investors.

The film is carried by the love between Billi and her grandmother, so it rightfully should not have been distracted by a needless romantic subplot. In focusing on familial matters, the film becomes a more poignant portrait of immigrant experience—in the awkwardness of the long-delayed family reunion, in the way Billi stumbles through her Chinese (at times pausing to ask how to say certain words), and in the unspoken awe of watching one’s motherland change.

Maybe you know how this story will end. But this movie isn’t so much about how it will play out—even as they hurtle toward a nerve-racking sham of a wedding. It’s about experiencing the many webs of a family spread apart and how they thread themselves back together. What Wang does best is making the film feel lived in rather than something to watch from a distance.