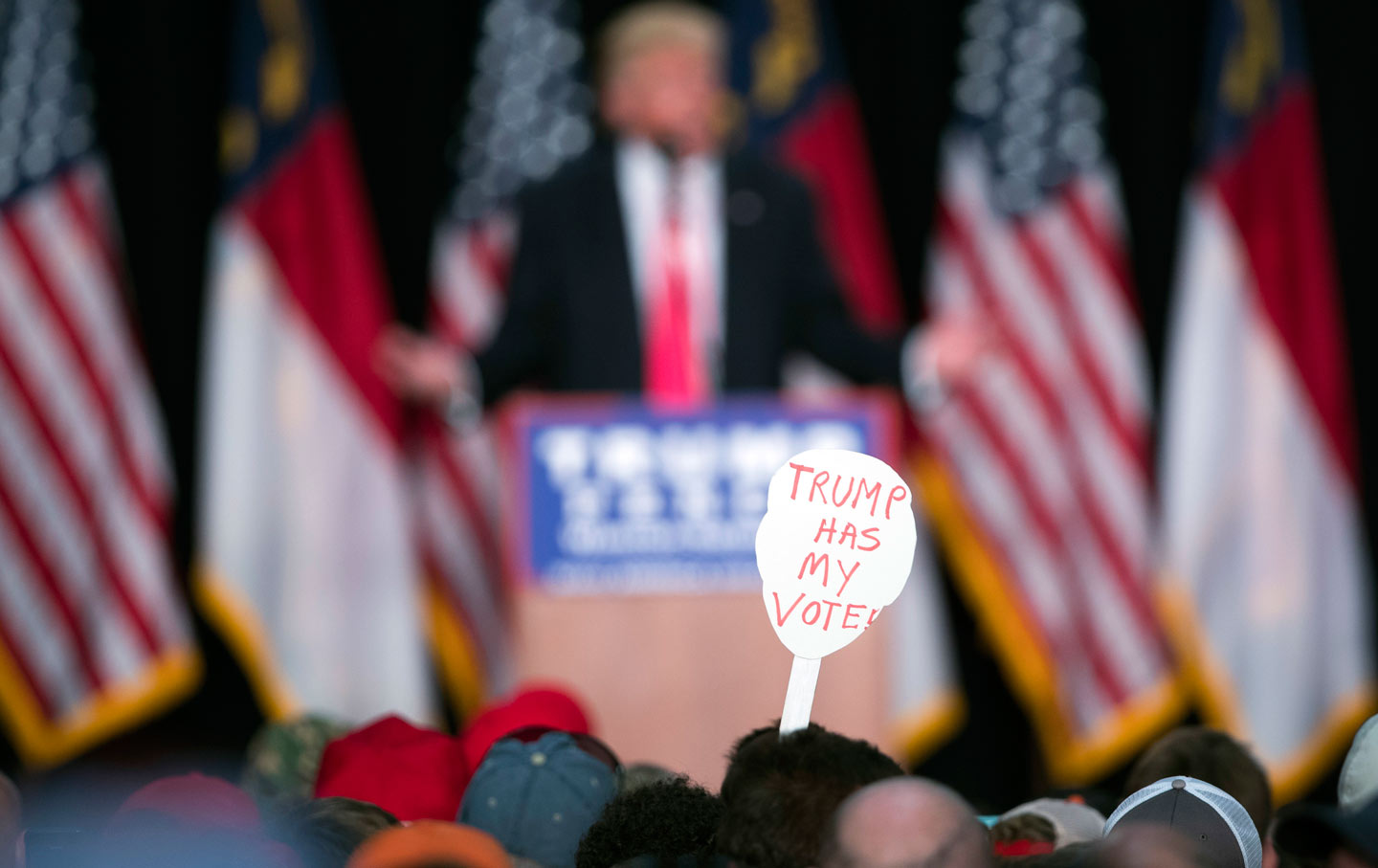 At long last, the working class has won. The referent is of course to the “white working class,” the newest and also the oldest practitioner of identity politics. An improbable person leads the armies of right-wing populism. A billionaire—if he is to believed, which is a dubious assumption—he nonetheless feels the pain and anger of blue-collar America. He talks their talk and promises to walk their walk. Populists in pinstripes have been with us for a while now—corporate lobbyists decked out in hard hats, managerial honchos in cowboy garb munching on bacon rinds, zillionaire dynasts driving Range Rovers—have populated the political landscape for a quarter-century, faux bubbas seeking votes and office from working-class stiffs in order to shelter their own privileges.

Trump, however, dared to go where no one of his social genotype had dared to go before. He assaulted mercilessly the redoubts of established power, party chieftains, political sages, corporate kingmakers, media lords, Pentagon generals, and guardians of convention and political politesse. And although running as a Republican, his contempt for elites was bipartisan. This had been a work in progress ever since Nixon invented the “silent majority” to mobilize its fury against the limousine liberals who had betrayed the American everyman. But until Trump that ire had been directed against the cultural and moral offenses of cosmopolitan elites—abortion and women’s rights generally, gay marriage and other sexual transgressions, impiety and secularism in public life, welfare indulgences, and so on. Never had upper-class rabble rousing challenged the sources of economic and political power which, after all, both parties guarded like the crown jewels.

Challenges of that kind erupted independently and most recently both on the left (Sanders and Occupy) and on the right (the Tea Parties and their animosities aimed at the “bail-out state,” the Federal Reserve, and the political correctness of the Fortune 500). What had been a silent-majority creature of elite confection found its own voice, denounced its creators, and found a mouthpiece in “the Donald.”

Once a banished part of our lingua franca, today you can’t open a newspaper or Web site without learning this or that about this mysterious, long invisible world, the burned over social space of the blue-collar working class. Days before the election they were dismissed as dinosaurs, all but extinct. Some dinosaurs! While Trump’s triumph clearly depended on other parts of the population as well, breaching the “blue wall” of the Rust Belt by feigning solidarity with the beleaguered working-class victims of Wall Street was critical (50 percent of union households voted for “the Donald”). If not quite the corpses depicted by liberal pundits, they were indeed and had been for decades witnessing their own dispossession at the hands of finance capitalism and the global free market. But that is too antiseptic and abstract a way to put it. This devastation in material well-being and in ways of life was not the work of history or the technological imperative, nor was it the empyrean, icy judgment of progress. It was consciously connived at by leading circles of corporate industry and finance and their political enablers in both parties. Dispossession was as much the work of the Clintons as the Bushes, as much Obama’s doing as Reagan’s.

Now the sour fruits of that experience have come home to roost. Who is to blame? Some advise us against finger-pointing at this scary time, but if not now, when? Let’s put in parenthesis the usual suspects—the legislative, judicial and extra-judicial wheeling and dealing of the established right, the surrender of the mass media (although its questionable when, if ever, they offered a robust resistance), the corporate wire-pullers and lobbyists infesting the whole political universe, the clerics and parsons and televangelists of the prosperity gospel who wouldn’t recognize Jesus dead or risen. Instead, let’s look at us.

Long ago the Democratic Party to which most progressives willingly or grudgingly gave their fealty stopped defending the white working class in any serious, non-rhetorical, programmatic way. The center of gravity of the party of the New Deal shifted elsewhere and became infatuated with the neoliberalism of the new order. The labor movement tagged along, a pathetic semblance of its former self, living in fear it that might be isolated form the corridors of power, and so thereby isolated itself from its native constituency, without which it power was a figment of its own imagination.

Much of this flight from deindustrialized heartland America was excused or given moral justification by treating that world as, first of all, hopelessly racist. This was consoling, and dangerously delusional. While elements of the “white working class” undeniably vented their resentments against African Americans, their grievances were always more deeply rooted and complex than that. One of the more telling statistics of this election records that blue-collar male voters voted in considerably greater numbers for Obama than they did for Clinton. It’s hard to square that with a portrait of working-class rebels distinguished by marks of racial prejudice. One is reminded of that poll taker back in ’08 who called a Rust Belt home about their voting preferences only to hear in the background a male voice telling presumably his wife to say he was voting for “the n-word,” only he actually used it. Obama seemed at the time the closest thing to “change” on offer, and Hillary the furthest away.

Confronting the institutions and elites that produced blue-collar dispossession, however, was not on the agenda of the Democratic Party. Otherwise the party was prepared to defend—after some heavy pressure exerted by mass uprisings in black America—notions of formal but not substantive equality. Identity politics, however much it offered a language of empowerment to the excluded, was also a game corporate-liberal elite America was more than happy to indulge; it was, after all, good for the bottom line and, moreover, catered to the self-righteousness of a milieu that extended far beyond the precincts of the corporate boardroom.

Indeed, this moral atmosphere saturated the ranks of the progressive community fencing it off from any possible contact with the accumulating grievances and even existential fears of “white working-class” America. Disparaging everything from its dress to its home furnishings, from its argot to its hobbies, from its diet to its taste in sports, from its religiosity to its prudery, the world of upwardly mobile liberal-leftists lived in its own hermetically sealed off space. Traditionally the champions of the disposed, the progressive world shrank its social vision, became sanctimonious in its own way, and now is forced to confront an “identity politics” on the right led by history’s zoological malfunction. Tucked away but not so hidden as to be undetectable in the DNA of this blue-collar uprising is an anti-capitalism that Trump, the über-capitalist, did not shy away from engaging. Nor did Bernie Sanders. Can we reconstitute ourselves in that same way and speak to the newly dispossessed, but free of the toxic fantasies with which Trump feeds them?