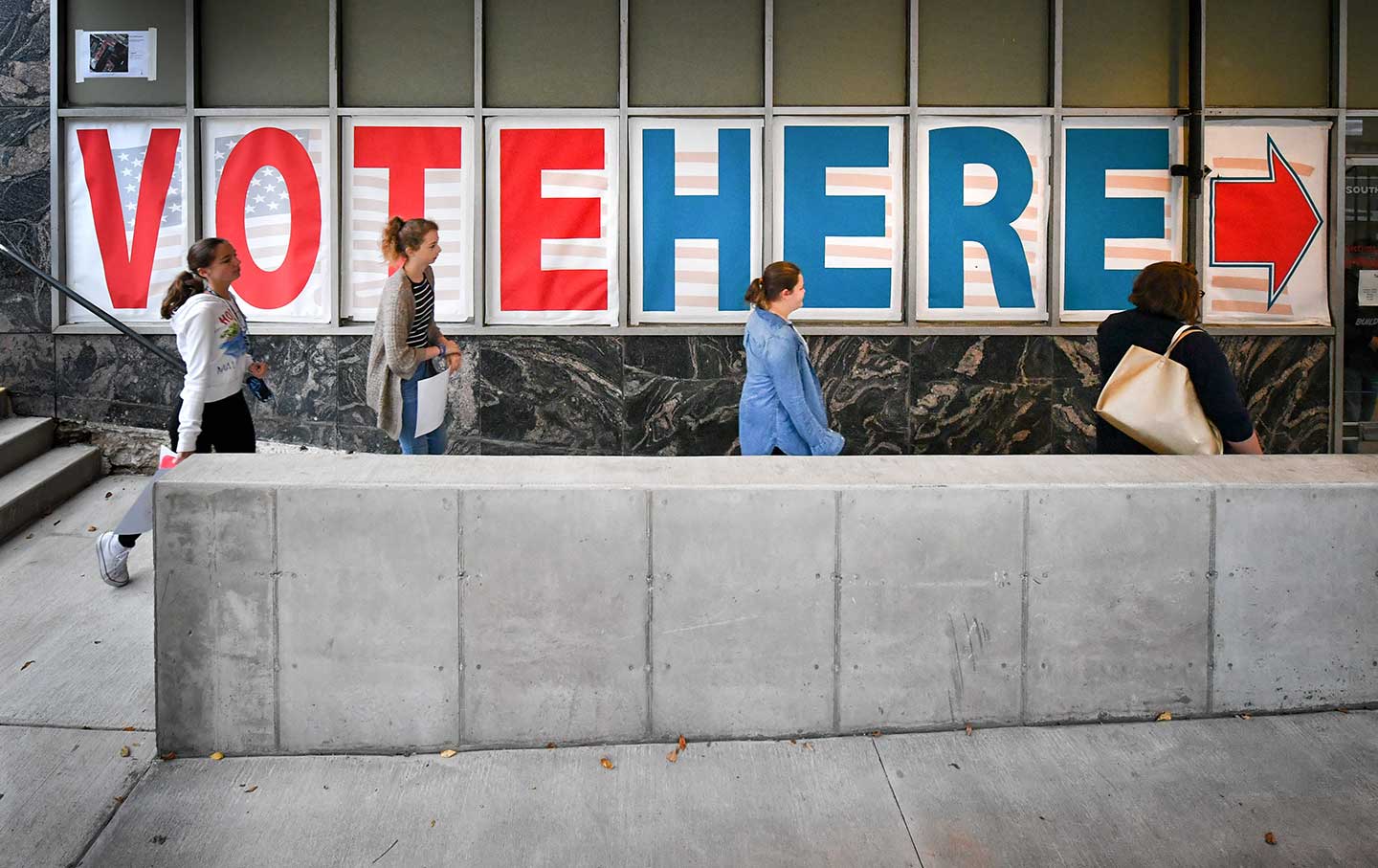 Gary Younge is a columnist for The Nation, a fellow at the Nation Institute, and an award-winning writer for The Guardian, where he wrote about the Democrats and Trump. His most recent book is Another Day in the Death of America: A Chronicle of Ten Short Lives. This interview has been edited and condensed.

Jon Wiener: Return with us now to March 2016. Ten people are running for the Republican nomination, and Donald Trump is in the lead. The evangelical candidate on the far right is Senator Ted Cruz of Texas. Trump takes an unprecedented step in modern American politics and goes after Cruz’s wife Heidi with an insulting tweet. You wrote recently that this incident still has significance for our politics today, more than two years later—but not because of the tweet itself.

Gary Younge: That’s right. Deborah Wasserman Schultz, head of the Democratic National Committee, sees this horror show unfolding, and says, “I want Donald Trump to talk every single day for the rest of this election.” Hillary Clinton has her own version, taken from The West Wing: “let Donald be Donald.” That was their line: The longer this man talks, the more likely he’s not going to win. He’s his own worst enemy. So let the man talk. Well, he did, and he won.

The significance today is that they are still letting him do it. The Democratic Party establishment has no message of its own. They are counting on the resistance to Trump. Four of the five biggest protest marches in American history have taken place over the last couple of years. The Democrats hope to be the beneficiaries of all of this anger, but they have formulated nothing as a coherent response to Trump’s actual policies. They’re in opposition insofar as they say, “We don’t like that guy. We’re against that guy.” But in terms of creating a positive alternative vision for what they would do, something that people could rally around, they offer nothing. They’re still letting him talk and thinking that’s enough.

JW: Of course, there is a positive alternative today: It’s personified by our new hero, Alexandria Ocasio-Cortez. She’s the democratic socialist who defeated a leading establishment Democrat for the congressional nomination in the Bronx and Queens. She is going to become the youngest woman in history elected to the House of Representatives. How did she get elected?

GY: She fought a robust campaign with a series of basic, easy-to-grasp messages about free higher education, fully funded public schools, a universal-jobs guarantee, and Medicare for All, along with a strong environmentalist message. She said, “Look, if we have money for endless wars, if we have money for trillion-dollar tax cuts, then we have money to heal people and to educate people and to try to stop the planetary demise.” Very clear. Very basic. Not triangulating. Not trying to split the difference, but offering a clear message about what else is possible.

Of course it’s the Bronx—I understand that. Not everywhere is going to be like the Bronx in terms of the appeal of those messages. But look at the appeal of Trump’s messages: They are completely incoherent and frankly ludicrous. I spent most of the election in 2016 in Muncie, Indiana. I would ask Trump supporters there, “Do you think he’s going to bring back the car plants that were here? Do you think he’s going to bring them back from Mexico?” “No, I don’t think so.” But they needed something to change, and hoped he might help. So they voted for him. Contrast that with Hillary Clinton, who I saw on the stand in Iowa—she said, “I would rather under-promise and over-deliver.” Who votes for that? “I’m just going to set your sights real low, and then surprise you afterwards.” Then don’t be surprised if you don’t get the job.

JW: The primary season is just about over now. The Democrats have pretty much picked their congressional and state candidates who will run in November. Alexandria Ocasio-Cortez and Bernie Sanders campaigned for several people in the Democratic primaries. Two-thirds of their candidates lost. The party establishment is now saying “We told you so. Even the Democrats don’t want that kind of politics.” What do you think?

GY:: That’s crazy. The label “socialist” over the last many years has been somewhere between an eccentricity and a slur. That they would now win a third of seats they campaigned for is actually quite amazing. This term, “socialism,” this notion that there might be a different system, a different way of doing things, is entering mainstream political discourse.

JW: There’s that new Gallup poll out—the headline was “Democrats today are more positive about socialism than capitalism.” Forty-seven percent of Democrats view capitalism positively, down from 56 percent just two years ago. And 57 percent of Democrats view socialism positively. That is the first time the poll has found that big a gap and a gap in that direction. What do you make of this?

GY: One of the things that interesting about that poll, I think, is it’s not so much that socialism is popular. It’s that capitalism has really taken a dive. That should not surprise us. We are now 10, 11 years off the economic crash where the poor were made to pay for the mistakes of the rich. Tuition has gone up. Health costs have gone up. Everything has gone up apart from wages. And the fact that the stock market is doing well is great for people with stocks, but many people don’t have stocks. People in America are working longer. Bankruptcies among older people are increasing. The assumption starting in the ’90s after the collapse of the Soviet Union was that there was only one possible system. It was capitalism, and it would spread around the world in a neoliberal way that would benefit us all. Well, there may be people who still believe that, but very few people can actually make a reasonable case for that in this moment. It takes a while for old versions of common sense to break down, but that’s what we are seeing now.

JW: The Democratic establishment, the Clintonians, reply that you have to look where the votes are—and the key swing voters, with whom we could win in November, are the suburban white middle-class Republicans who don’t like Trump, especially the women. These are people who vote. These are people who are college-educated. They’re the ones we should be recruiting—and they’re not going to be recruited by talk about socialism. What’s your response to that?

GY: First of all, I don’t think anybody should be taking lessons from the Clintonians about where to look for votes, because that didn’t go so well last time. Secondly, I don’t think people should go out and campaign for socialism. I think people should go out and campaign for affordable health care and free education and for some level of redistribution and for infrastructure investment. And against cops shooting people dead in the street for no good reason and against sexual harassment and for a woman’s right to choose what to do with her body. I don’t think people’s starting point for this stuff should be vote for socialism. It should be “Vote for your future.”

GY: The last election was lost by the people who didn’t show up. And they didn’t show up because they were insufficiently inspired. Because Hillary said, “I’ll under-promise and over-deliver.” Because she couldn’t make up her mind about NAFTA. Because it wasn’t clear whether the billionaire Trump or the Democrat Clinton was the one more in favor of the banking and finance industry. If the Democrats want to win next time, they have to motivate their base. It’s true that they got more votes from Trump, but they didn’t get them in the right places. And in the places where they didn’t get them, it wasn’t because of a massive amount of switching from one side to the other. It was because people stayed at home. If you look at where the country is going demographically, and where the Trump project is going economically and politically, I think that, once the Democrats decide to come out with the right kind of message, Trump’s house of cards will fall pretty rapidly.