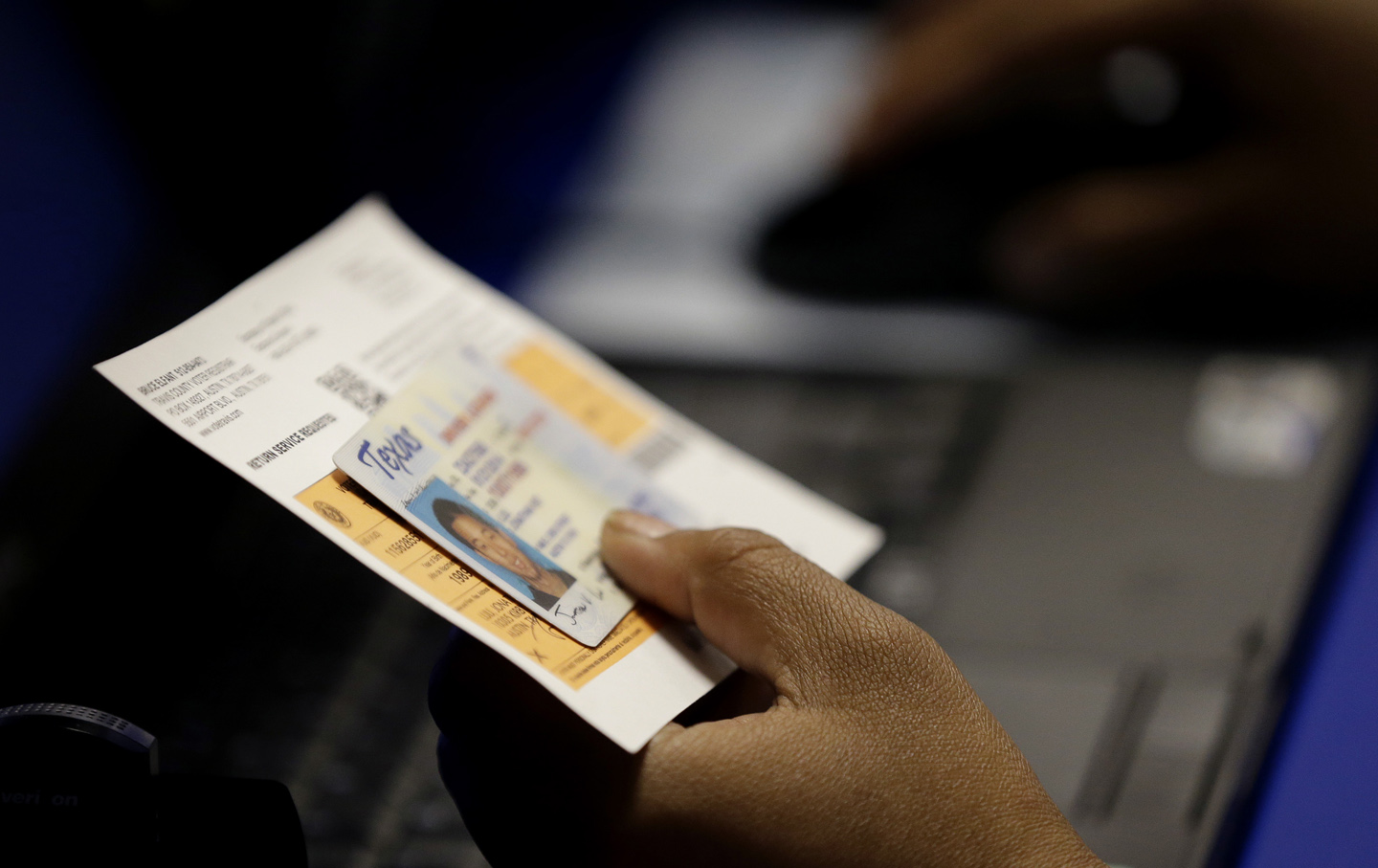 The most conservative court in the country just struck down the nation’s most restrictive voter-ID law. The US Court of Appeals for the Fifth Circuit ruled in a 9-6 decision this afternoon that Texas’s law violates the Voting Rights Act by discriminating against black and Hispanic voters. The law “imposes significant and disparate burdens on the right to vote,” and has “a discriminatory effect on minorities’ voting rights,” the majority held. Judge Catharina Haynes, a George W. Bush appointee, wrote the opinion. With the Supreme Court divided 4-4, this is likely the definitive word on the case.

Today’s ruling is the second in two days striking down a major GOP-backed voting restriction, following yesterday’s court ruling softening Wisconsin’s voter-ID law. The Republican platform adopted at the RNC this week voiced support for “secure photo ID laws” and said the party “strongly oppose[d] litigation against states exercising their sovereign authority to enact such laws”—like in Texas and Wisconsin.

As we approach the 51st anniversary of the VRA on August 6, the historic civil-rights law is weakened, but not dead yet.

In truth, the Texas law should have never seen the light of day. It was blocked by a federal district court in August 2012. But after the Supreme Court gutted the VRA in a June 2013, ruling that states with a long history of discrimination no longer had to approve their voting changes with the federal government, Texas’s law immediately went into effect.

The law was blocked again in September 2014 by another federal district court in Texas. Judge Nelva Gonzales Ramos found that 608,470 registered voters in Texas, 4.5 percent of the electorate, did not possess the limited forms of government-issued ID required to cast a ballot, with African-Americans three times as likely as whites to not have a voter-ID, and Hispanics twice as likely. She ruled that the law, known as SB 14, violated Section 2 of the Voting Rights Act, which the Supreme Court kept in place.

“It is clear from the evidence,” Ramos wrote, “that SB 14 disproportionately impacts African-American and Hispanic registered voters relative to Anglos in Texas…. To call SB 14’s disproportionate impact on minorities statistically significant would be an understatement.”

She called the law “an unconstitutional poll tax” and said it was passed by the Texas legislature “because of and not merely in spite of the voter ID law’s detrimental effects on the African-American and Hispanic electorate.” Under the law, a handgun permit was considered an acceptable voter ID, but a student ID was not. Texas has had more violations of the VRA over the last twenty-five years than any other state.

Obtaining a voter ID in Texas, as Ramos noted, could be far more difficult than one assumes. Voters had to pay for underlying documents to confirm their identity, the cheapest option being a birth certificate for $22, and there are no DMV offices in 81 of 254 counties in Texas, so some voters needed to travel up to 250 miles to the closest location. Counties with a significant Hispanic population are less likely to have a DMV office, while Hispanic residents in such counties are twice as likely as whites to not have the new voter ID (Hispanics in Texas are also twice as likely as whites to not have a car).

On August 5, 2015—one day before the 50th anniversary of the VRA—a three-judge panel on the appeals court affirmed Ramos’s finding that the law had a discriminatory effect, but disagreed that the law was intentionally discriminatory. The full Fifth Circuit court then decided to hear the case en banc, with the law remaining in effect until then.

Today a majority of the court affirmed Ramos’s finding that the voter-ID law violated the VRA. As the Brennan Center for Justice noted, “This marks the fourth court to find that the law has a disproportionate impact on African-American and Latino voters in Texas.”

“We conclude that the district court did not reversibly err in determining that SB 14 violates Section 2 by disparately impacting minority voters,” the court said. It cited evidence of voters’ being blocked from the polls, noting that “the district court found that multiple Plaintiffs were turned away when they attempted to vote.”

It ordered the district court to craft a remedy before the 2016 election, suggesting that voters could use their voter-registration cards as ID or that those without strict voter ID be able to vote by signing as affidavit—a solution proposed by a federal court in Wisconsin yesterday.

The majority also harshly rebuked Texas for presenting no evidence of voter impersonation to justify the law. “Even under the least searching standard of review we employ for these types of challenges, there cannot be a total disconnect between the State’s announced interests and the statute enacted,” the court wrote. “The provisions of SB 14 fail to correspond in any meaningful way to the legitimate interests the State claims to have been advancing through SB 14.”

Indeed, the court noted that the law could make curbing the problem of voter fraud–the stated rationale for it–worse by allowing elderly voters to cast ballots by mail without showing ID. “In order to prevent voter fraud, the State has pushed more vulnerable elderly voters away from in-person voting—a form of voting with little proven incidence of fraud—and toward mail-in voting, which the record shows is far more vulnerable to fraud, particularly among the elderly. In fact, SB 14 does nothing to address the far more prevalent issue of fraudulent absentee ballots.”

Six conservative justices disagreed with the ruling, accusing the majority of fanning “the flames of perniciously irresponsible racial name-calling.”

Today’s ruling is a very significant victory for the hundreds of thousands of voters who were disenfranchised by the law, including students, veterans, and elderly citizens born during Jim Crow.

I’ve been telling their stories for years. Elizabeth Gholar was born in rural southwestern Louisiana in 1938, in the small town of Jennings, the county seat of Jefferson Davis Parish. After growing up in the Jim Crow South, she felt voting was always important.

In 2013, after retiring as a school cook, she moved to Texas to live with her daughter in Austin. She had a driver’s license and birth certificate from Louisiana, but ran into problems when she tried to get a driver’s license in Texas, which she needed to vote. She was told that the name on her birth certificate, which had been incorrectly filled out by the midwife who had delivered her at home and listed her mother’s maiden name, had to match her current name.

Gholar returned to a department of public safety office to apply for a voting-only ID but was once again told she needed a matching birth certificate. She then hired a lawyer in Louisiana to get her an amended birth certificate. She called the cost and time of getting a new birth certificate “another form” of a poll tax. “Voting is a right that everybody else had and it’s a celebration,” she testified in a federal trial in 2014. “And it’s been taken away again.”