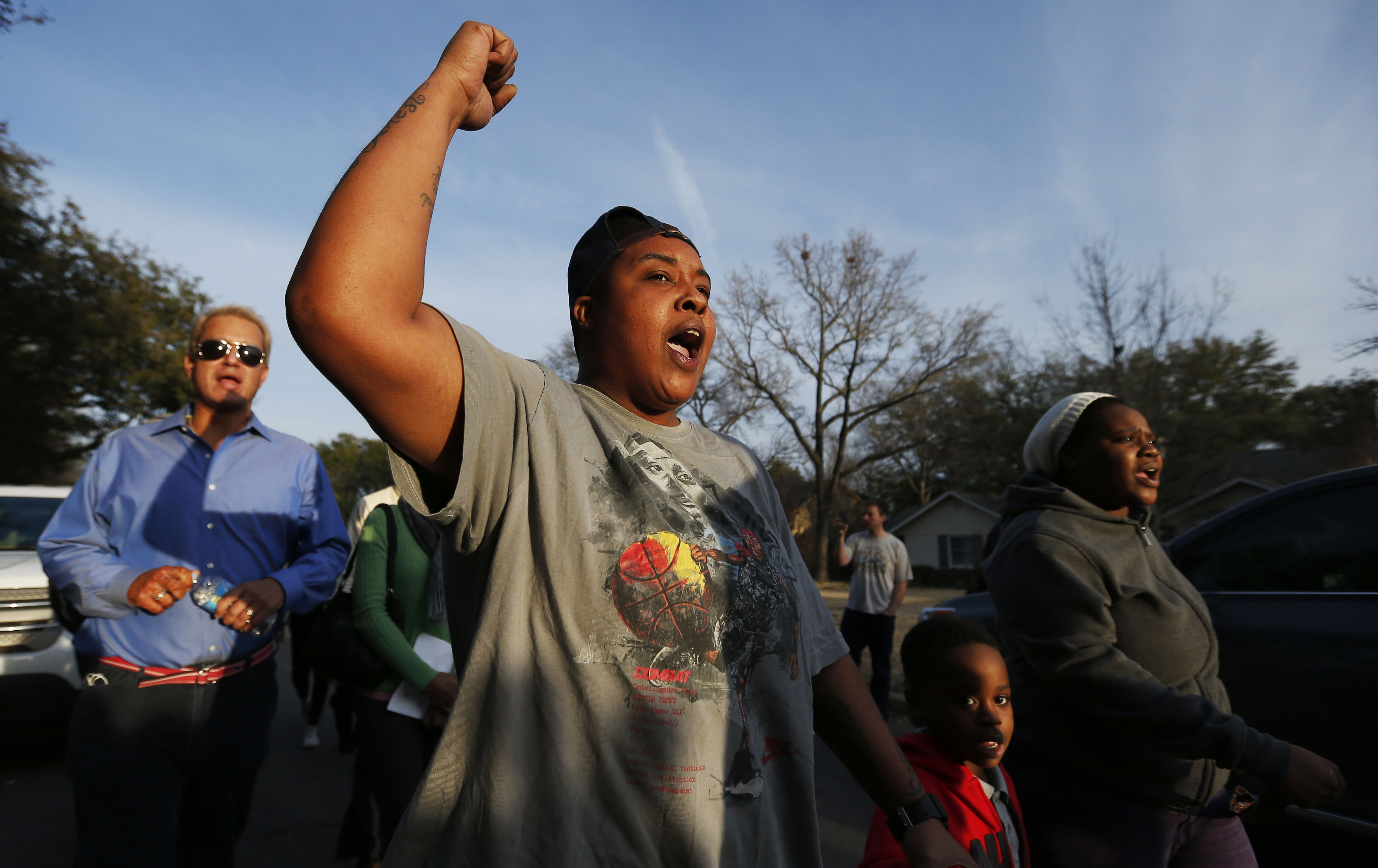 On May 3, Caleb Jackson was shocked to receive an e-mail from the financial-aid office at American University informing him he was no longer eligible for aid.

One year ago, Jackson missed three of his final exams when he took part in demonstrations demanding accountability for the culprit of yet another racial incident on campus like those that marked nearly every year of his matriculation at AU. Last year it was bananas hanging from nooses in response to the election of the school’s first black woman student-government president. Despite the pressure of final exams, Jackson felt the overt racism and implied threats of the noose incident compelled him, and many of his fellow students, to engage in the urgent protests that immediately followed.

This story was produced in partnership with the Anna Julia Cooper Center of Wake Forest University as part of Black on Campus, a series reporting on issues of national consequence to a black college student audience. It is under the umbrella of Student Nation, a section devoted to highlighting campus activism and student movements from students in their own words. For more Student Nation, check out our archive. The Student Nation program is made possible through generous funding from The Puffin Foundation.

Indeed, American University erupted into such chaos that the administration allowed students to request extensions on final assignments, which is precisely what Jackson did. The three missed final exams resulted in three incompletes reported for those courses. What Jackson did not know was the incomplete grades jeopardized his financial aid. And even after he appealed the financial-aid ruling, he was put on academic probation.

“I didn’t know that even if it is approved, you’re on probation the following school year,” he said. According to American University’s financial-aid website, this information is included in the letter that approves an appeal.

Jackson’s situation isn’t rare. As the number of racial incidents increase at colleges and universities, more black students find themselves on the front lines of campus protests, defending their right to be there. But activism has a cost. Acts of racial bias draft black students into racial battles without warning, where they sustain evidence of battle fatigue, reporting skipping class, missing work, and sleeping less—all in service of making change at their schools.

“I’ve been really overwhelmed with everything that’s been happening with my financial aid,” Jackson said. “I find it really annoying.”

More black college students find themselves mired in protests because hate crimes are on the rise. Between 2015 and 2016, the number of reported racial incidents at colleges and universities jumped nearly 25 percent, according to data from the US Department of Education.

Sometimes these flyers are taken down by university officials or campus police, but schools just aren’t taking a strong enough stance against them, she said.

Regardless of the form of the racist act, when students take actions to hold their universities accountable, sometimes their grades, health, finances, and mental health suffers.

Students protested for four days in late March at Miami University in Oxford, Ohio, after a white student was caught bragging on Tinder about using the N-word. It only took black students three days to organize a protest, said Imani Steele, a senior marketing major.

DeVaughn Golden, a recent Miami University graduate, said he missed two days of classes during the week of protests on campus. He was at the March 26 protest, where onlookers laughed and a passerby shared a photo of the demonstrators on Snapchat with the caption, “who let the zoo out,” followed by three monkey emojis.

“It’s exhausting because I’m a student first. I’m doing things that other people get paid to do,” said Steele, adding that she doesn’t feel welcome at Miami University. “Someone’s gotta do it…. One thing about black folks is, if nobody else got us, we got us.”

Steele’s feelings of exclusion reflect how students of color across the country feel about their sense of belonging on campus.

Only 28 percent of African-American, Latinx, and Asian-American students report feeling included on campus, compared to 45 percent of white students, according to survey data by the Jed Foundation and the Steve Fund. The fund was founded in honor of Stephen Rose, a black Harvard graduate who committed suicide in 2014.

Similarly, campus-climate survey data at American University found only 33 percent of African-American students feel included. After last May’s hate crime, where messages like “Harambe bait” and the letters of the historically black sorority Alpha Kappa Alpha Sorority Inc. were written on bananas hanging from nooses, the school saw four instances in which flyers with racist, anti-Semitic, and anti-immigrant messages were distributed on campus.

While students at Miami University rose up to protest racism at their school, the black community at George Washington University were upset over a racist Snapchat photo posted on January 31 that likened black people to monkeys. In the image, two former sorority girls smile at the camera, one brandishing a banana peel. The caption reads: “Izzy: ‘I’m 1/16 black.’”

Freddy Ryle, the president of George Washington University’s Black Student Union and a member of Alpha Phi Alpha Fraternity Inc., said he skipped classes to attend meetings with students and administrators about the incident and the culture of racism at GW. He fell behind in his coursework. “I’m still playing catch up,” he said.

“Even when I do find time to study,” he continued, “it’s hard to focus because all I’m thinking about is the incident or how it affects my community and what I can do.”

In the hours after the racist Snapchat photo was texted and tweeted across campus, former George Washington University student government senator Imani Ross said she e-mailed two school administrators and university President Thomas LeBlanc to discuss the photo. Ross worked with student leaders on campus to write a resolution calling for the removal of Alpha Phi, the sorority to which the girls in the photo belonged.

Ross said she took two weeks off from her internship at the House of Representatives and missed nearly 60 hours of work.

“There were days when I was in class and in back-to-back meetings, and then we were doing organizing work,” she said. “There were nights when we were up until three or four in the morning planning something or writing up something for administrators, or just organizing and trying to get our voices heard.”

For State University of New York–Plattsburgh senior Ayesha Joseph, being a campus activist meant making a choice between making money and making change. On February 16, students learned of a racist Snapchat photo in which a white student—later identified by the school’s newspaper as Maria Gates—posted a selfie with the caption: “lynching ni—ers tonight.”

Joseph, a broadcast journalism major, said that although she found the campus-wide protest “empowering,” it was also “draining.”

Joseph works in SUNY Plattsburgh’s admissions office and gives tours to prospective students. She didn’t go to either of her jobs during the first week of the protests.

“It was a larger crowd [of prospective families] on the Friday after the whole situation happened, and I didn’t report [to work],” she said. “I let [my supervisor] know that I’m uncomfortable telling people about this school that lets racist things happen.”

By the second week of protests, Joseph said she was back to giving tours. But she said she was very vocal about racism on campus, after parents asked about signs from the protests that were left in the student center.

Meanwhile, students at George Washington University were doing the same type of organizing as their counterparts at SUNY Plattsburgh.

“Most of us weren’t sleeping, most of us weren’t attending classes, most of us weren’t going to our internships,” said Ross, when the racist Snapchat photo emerged. “I think all of the larger response and a lot of the quick change that occurred came because of the sacrifice of so many students’ academic, personal, and professional lives.”

Ryle also knows what it’s like to make the choice between justice and a paycheck. He gave up shifts at his part-time job to protest.

“You try to change your hours, maybe pick up a morning shift or a weekend shift, but even that’s hard because we were literally busy all hours of the day,” he said. “It was difficult.”

But for Ryle, a recognition of the greater impact of the work superseded his job. “I need the money, I’m a college student just like everyone else,” he said. “But at the same time, we do this because although we know administration moves slowly and there won’t be rapid change right now, we do it for the next group of black folks that’s coming in.”

Black students’ work at George Washington University resulted in administrators issuing a nine-step plan for addressing racism on campus, including the introduction of mandatory diversity training for first-year students starting in the fall of 2018 and updates to the school’s code of conduct to “address non-sex based harassment and discrimination.” However, the school’s chapter of Alpha Phi sorority remains active on campus.

Miami University met one of 10 demands proposed by black activists when administrators introduced a tool designed to make it easier for students to report incidents of bias and discrimination. “We want to give students the opportunity to speak up,” outgoing Dean of Students Mike Curme told The Miami Student. “And if it’s possible to respond, we will.”

The student in the racist Snapchat photo that went viral at SUNY Plattsburgh, Maria Gates, is no longer enrolled at the university, The Sun reported in February. However, school officials have not confirmed if Gates was expelled or if she left on her own.

After protests by black students and allies, American University changed the way it handles racist incidents. This year the school focused on increased security, faster communication, and individual and group counseling for students.

“Whether it’s the Counseling Center, whether it’s the dean of students’ office, we support those students to make sure that their academic pursuits are not disrupted as much as possible, but also making sure that they’re OK,” said Fanta Aw, vice president of campus life at American University. Aw also said black students at the university use the Counseling Center at a higher rate than other student populations, and they visit more after bias-related incidents.

American University also established the Antiracist Research and Policy Center and a $121 million plan to increase diversity and inclusion, including scholarships, faculty development, and a year-long course for freshmen. The university worked with Washington, DC, police and the FBI to solve what students have dubbed “the banana incident.” But more than one year later, the perpetrator who hanged bananas throughout campus remains unknown.

At George Washington University, Ross and Ryle said they felt supported by the institution during protests. Officials reached out to their professors to request coursework extensions for them, made them aware of the school’s mental-health services, and even went as far as purchasing textbooks for them.

“At the end of the day, because they were not doing their job, we had to sacrifice our own mental health for that to happen,” Ross said.