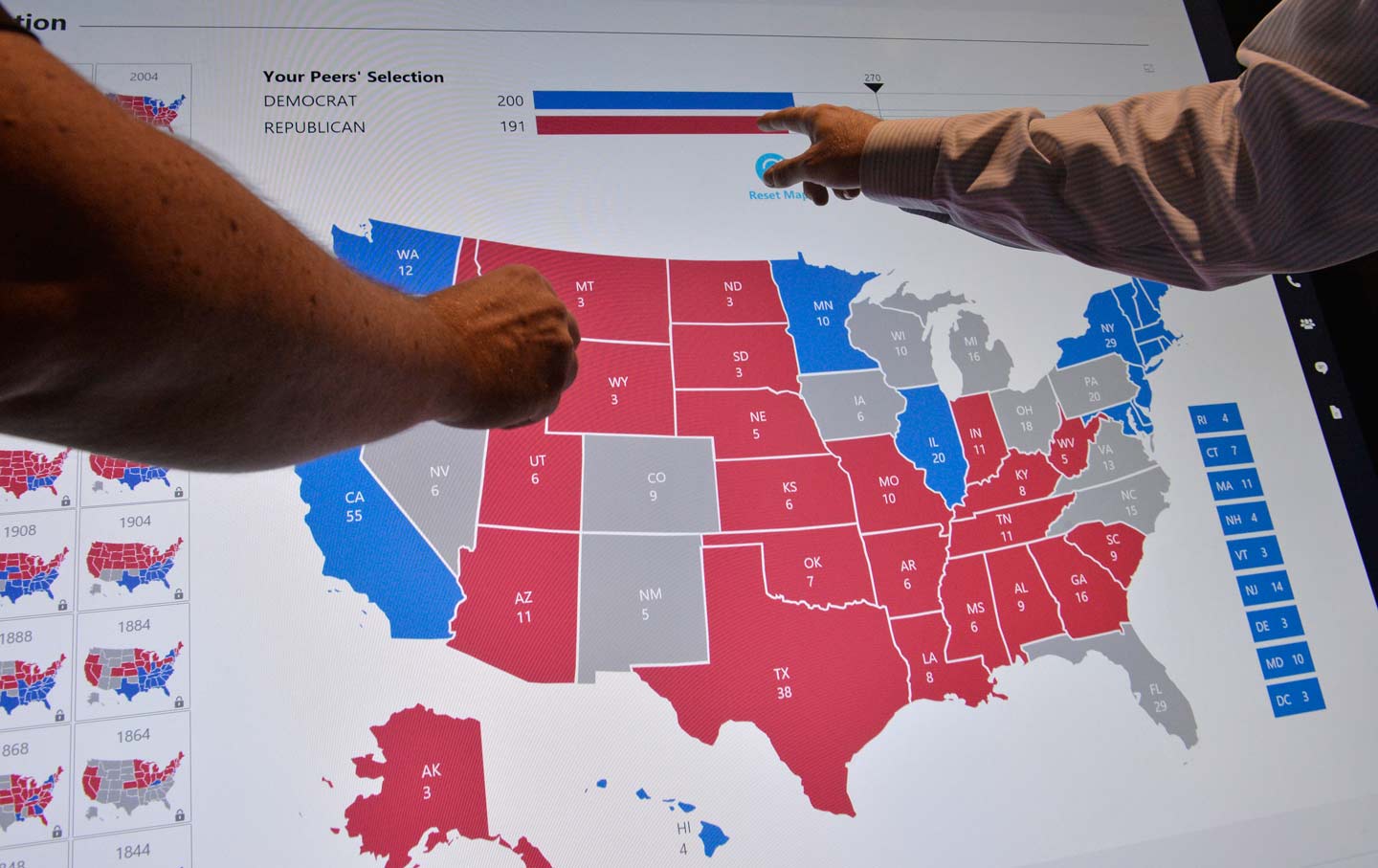 There’s never been a candidate like Donald Trump—but after all the outrage and anxiety he has aroused, it looks like the Trump-Clinton electoral map will be almost exactly the same as the Romney-Obama electoral map of 2012. Right now, three weeks out, Trump is leading in all the states Romney won, according to fivethirty-eight.com, except for North Carolina; Clinton is leading in all the states Obama won, except maybe for Iowa. Obama won with 332 electoral votes; it looks like Clinton will win with about the same.1

The 2016 campaign has been radically different from 2012—so how could the outcomes be similar? Trump’s outrageous behavior and horrifying talk are nothing like Romney’s gentlemanly conduct and moderate-sounding speeches. Clinton’s approval ratings are far below Obama’s—hers are around 44 percent favorable, while his reached 62 percent favorable in October 2012. And she’s failed to reunite the coalition that elected him—only 36 percent of young voters aged 18 to 30 say they plan to vote for Clinton, as compared to 2012, when Obama got 67 percent of the youth vote. Doesn’t all that mean the results should be different this time?2

The reason the 2016 campaign is likely to end up in pretty much the same place as the 2012 campaign is simple: American politics are surprisingly stable. As I argued here back in June (“Relax, Trump Can’t Win”), political science has found that issues don’t matter very much in presidential politics—not even issues like “build the wall” and “ban Muslim immigration.” Even candidates don’t matter a lot. Trump is the opposite of Romney in his temperament and fitness for holding office. But most of the people who voted for Romney will vote for Trump anyway. Similarly, the people who voted Democratic four years ago are very likely to do it again this year. And it’s the same for nonvoters—people who were eligible four years ago but didn’t vote are unlikely to vote this time. Voting is a habit, and so is non-voting.3

These long-term patterns of stability are amplified by the Electoral College and its winner-take-all rule. Over the last five or six elections, only a handful of states have shifted parties from one election to the next. And despite campaigns spending hundreds of millions in swing states, most of them swing back to where they were last time. This year it looks like only one or two states will switch parties on Election Day.4

But what about the historic shifts among voters? What about white workers abandoning the Democrats, especially in the South? College-educated women abandoning the Republicans, especially in the suburbs? Young people reluctant to vote for Hillary the way they did for Obama, and immigrant voters abandoning Trump in unprecedented numbers? All that is true, but, state-by-state, those developments tend to cancel each other out. Trump gains white workers in North Carolina, but loses suburban women. Clinton doesn’t do as well with young people, but does better with Latinos and Asians.5

What about the famous “undecideds”? Ask yourself how anyone could be undecided at this point, given the monumental differences between the candidates. What additional information do they need in order to decide? Political science has found that the undecideds are the least knowledgeable, the least motivated, the least interested in the campaigns. So despite the hundreds of millions spent by the campaigns to persuade them, the historic pattern for undecideds is not to make a decision but instead to stay home on Election Day. They did in 2012, and they are likely to do the same today.7

The fact that the electoral vote in 2016 will be almost the same as 2012 does not mean American politics has not changed. The Electoral College conceals the conflict raging in America today. Trump has transformed politics in the country, and the changes seem like they are here to stay: part of Republican base is much more vitriolic about immigrants, many working-class white men are more openly angry about changes in the American economy and society, and blame Democratic elites and the people of color who support them. We need to work to change the minds of Trump voters about the nature of the our problems and the solutions we need. But it’s not hard to imagine that, four years from now, the battle lines will be pretty much the same, and the long-term voting patterns won’t change dramatically in 2020.8