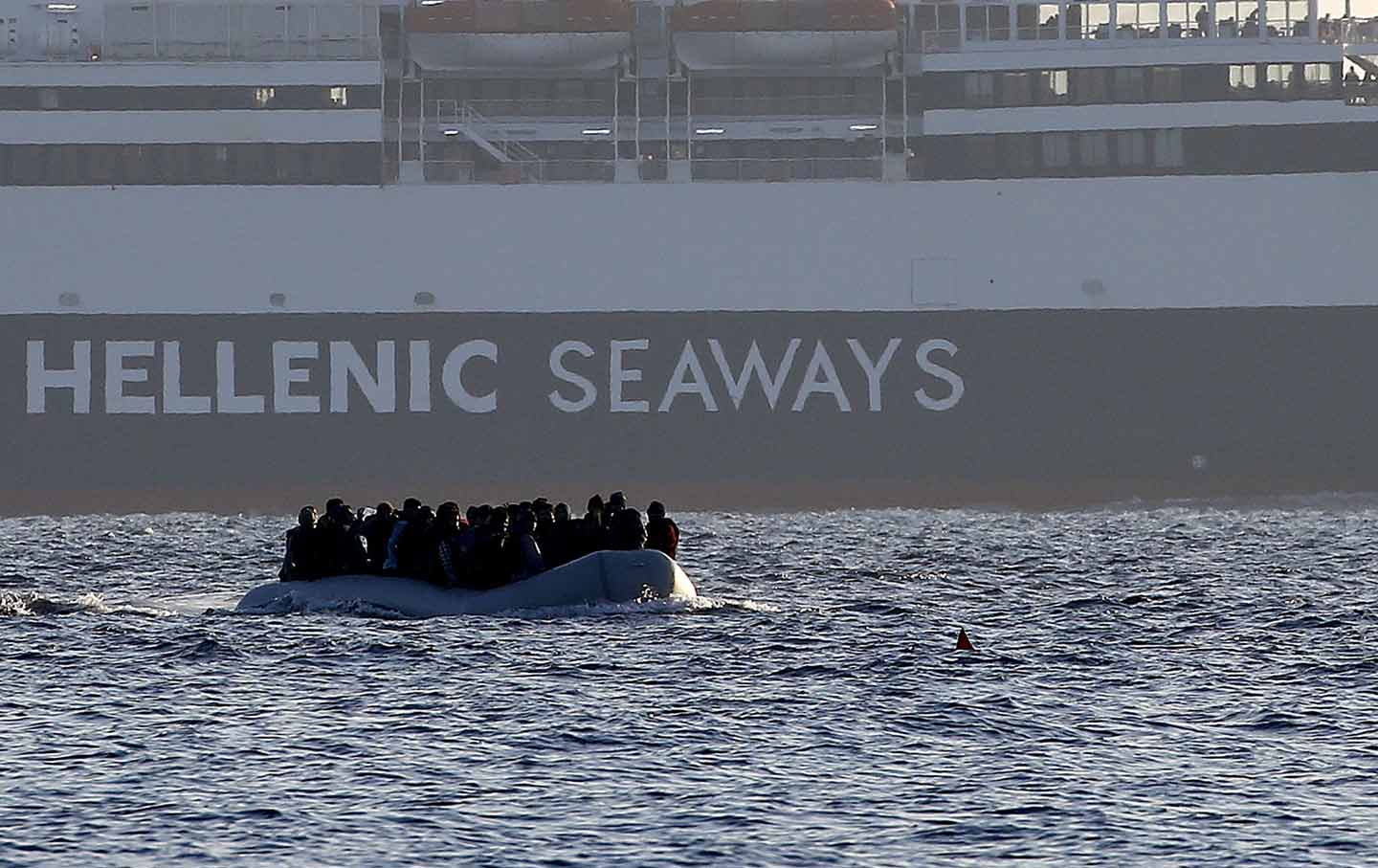 A raft of migrants approaches a beach on the Greek island of Lesbos, November 17, 2015. (Reuters / Yannis Behrakis)

“I tried but failed to ward off the second bottle of champagne,” begins David Brooks’s much-derided essay in the November 15 issue of the New York Times style magazine, T. Entitled “My $120,000 Vacation,” the piece recounts his genteel discomfort with the Four Seasons’ opulent “new 24-day, round-the-world fantasy trip.”

His heart is really in the right place, sort of: “I tried to protest,” Brooks says of that champagne. “Sometimes it is the structure of things that you shall be pampered and you have no choice but to sit back and accept that fact.” Indeed, the velvet ropes and fur-lined handcuffs of “Turkish delight,” Russian caviar, and “tray of figs” render him helpless: “Other sweet moments came when I just said what the heck and enjoyed the self-indulgence.” After all, “we all have a responsibility to reduce inequality in our society. But maybe not every day.” In any event, Brooks notes, “it’s one thing to say you should have an authentic travel experience with the people, but sometimes sitting for four hours on the floor of the Casablanca airport is just a useless pain.” And so the Four Seasons trip offers “staff at every stop,” who occupy themselves with filling out customs forms, carrying luggage, and delivering envelopes conveniently filled with the local currency.

In aerial photos, the panopticonic layout of America’s prisons resembles nothing so much as Versailles.

It was rather unfortunate that Brooks’s piece was published while the world was still numb with shock after the devastating attacks and loss of life in Paris. It was perhaps doubly unfortunate that the article has received much more attention than the horrific pair of bombings in Beirut, Lebanon, that took more than 40 lives just one day before the Paris attacks. Of course, it would have been just as unfortunate had it been published a few weeks earlier, when a US gunship attacked an Afghan hospital, resulting in the deaths of at least 30 doctors, nurses, and patients. It was also unfortunate when Brooks observed that his voyage of 24 days might, in the “commercial” world, have taken 90—for it was left glaringly unspoken that in the less-than-commercial world of desperate diaspora, such a trip would probably take many lifetimes as well as lives. And it was altogether unfortunate that the Four Seasons’ sleek, “fast-moving bubble” of luxury presented such a stark contrast with the rhetoric of walls, fences, drownings, rapists, parasites, animals, human garbage, and expulsion dominating the political debates over migration in the rest of the week’s news.

Brooks’s smooth glide upon a “vapor trail of…hospitality” was not just a “fantasy trip,” but premised upon fantastical presumptions about the real world. When he observed that his fellow travelers were hard-working ordinary folk—“the lower end of the upper class,” who “treated the crew as friends and equals and not as staff”—I wanted to start humming the theme from Driving Miss Daisy. This is a narrative arc whose symbolic disconnects ought to have been extinguished forever when George W. Bush flew over the devastation left by Katrina and claimed that he felt New Orleans’s pain. It is a narrative whose darker, sharper edge was on display when the Times’s own former reporter, Judith Miller, responded to the Parisian catastrophe by tweeting: “Now maybe the whining adolescents at our universities can concentrate on something other than their need for ‘safe’ spaces.” All this, in a world of such horrific violence that all any of us desires is the geography of safe space. As Vijay Prashad wrote of François Hollande’s commitment to wage war on the ideological evanescence of ISIS: “Macho language about ‘pitiless war’ defines the contours of leadership these days. Little else is on offer. It is red meat to our emotions.”

But high end or low, life on this exhausted planet with its wandering, traumatized populations is rapidly imposing equality on us all. One must wonder what happens if the global gaze of state surveillance is further deployed to “restrict liberties in order to defend liberty,” as Judith Butler wrote in a letter from Paris titled “Mourning Becomes the Law.” The years since 9/11 and the invasion of Iraq have seen an exponential growth in the industries of surveillance and in the confinement of our own gaze. Take “black sites,” for instance: Not only acts of terrorism, but much-too-easy acts of official suppression, can flip a switch and turn the City of Light into a site of darkness.

Data artist Josh Begley is perhaps best known for his conceptual work Dronestream, now renamed Metadata+, an app that sends a push notification for every reported drone strike made by the United States in Pakistan, Yemen, Somalia, and other war zones hidden from American eyes. His succinct summaries of the strikes are jarring: “Fifteen people were on their way to a wedding when a US drone ‘missed its target’ killing 15.”

That small act of looking has made the app the object of repeated attempts to shut it down, not only by the US government, but by Apple and its subsidiary iTunes—most recently in September. And across the globe, nations are enacting measures like Spain’s new “gag law,” which prohibits demonstrations near government buildings, or photographing arrests, or using Twitter, Facebook, and other social media to call on people to protest.

Begley’s app, conversely, insists on the magnitude of human loss: What if no one cared, or even saw the places where you had lived or to which you had fled? What if no one saw those places where there is no one left to mourn? Begley is also the creator of Prison Map, a collection of aerial photos of federal prisons across the United States. The style of this work echoes similar photos of formal gardens and great cathedrals; the panopticonic layout of America’s prisons resembles nothing so much as Versailles. From space, even the moated communities of the ultra-rich seem identical to those of the incarcerated poor. Expats, tourists, migrants, the imprisoned, and the self-contained: There is a doomed sense of equality between the view from above and the despair below.