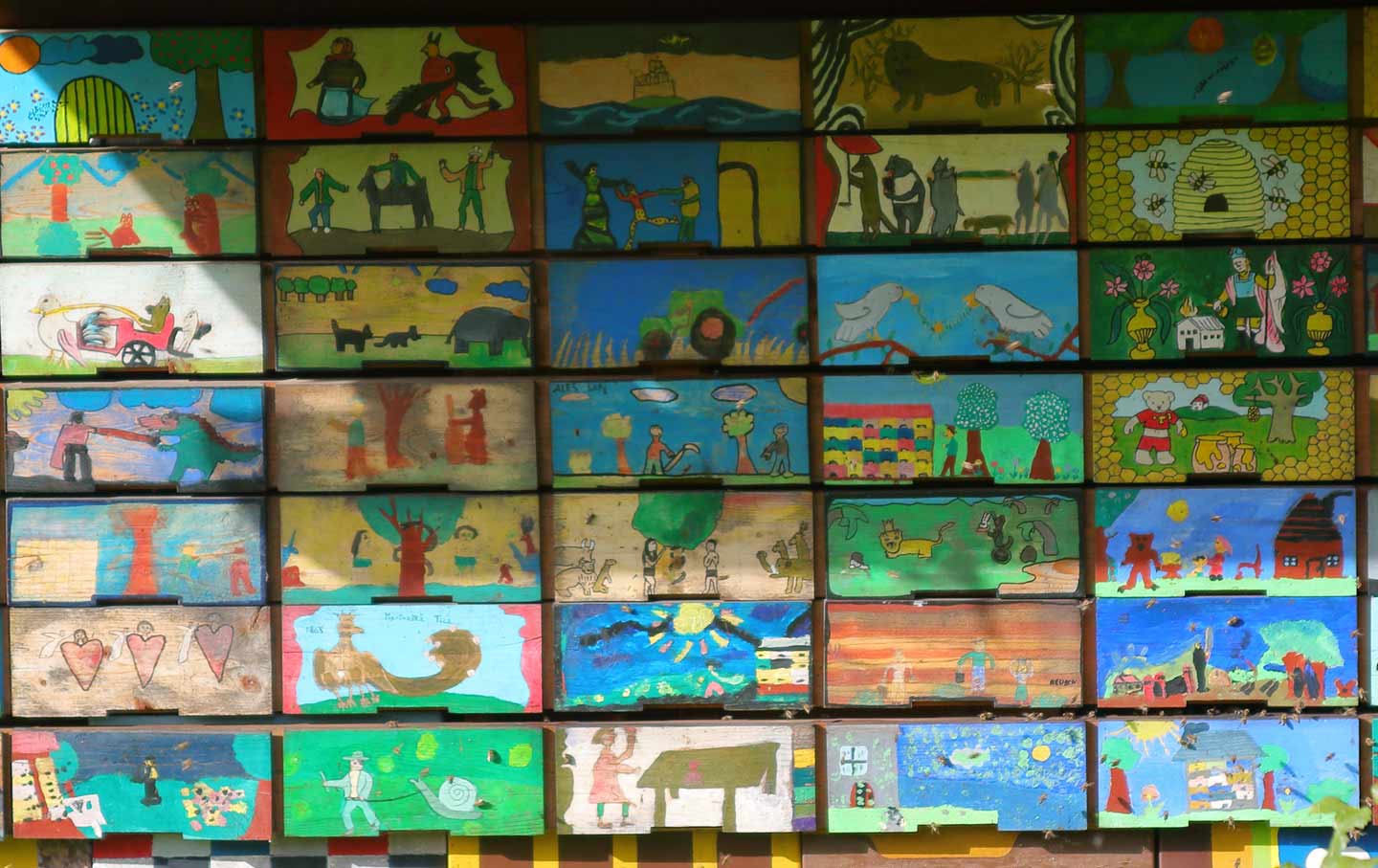 Honeybees, or Apis mellifera, which are native to Europe, the Middle East, and Africa, have been domesticated around the world, but since the 1980s their mortality has increased rapidly in most temperate regions (Europe, Japan, North and South America). The naturalist Jean-Pierre Rogel writes, of Canada: “The current losses of around 25% are exceptional, and would be disastrous economically if they continued in the medium term.” Bernard Tiron, who has been keeping bees in the Valgaudemar valley in France’s Hautes-Alpes region for 35 years, says: “When I started out, I was losing 5 percent over the winter. Now it’s 30 percent. The way things are today, I wouldn’t go into beekeeping again. There are no more flowers in the pastures: Farmers mow before the flowers bloom so they can get two hay harvests, which means more green stuff to feed their cows, and maximize their milk yield. Hedges are vanishing too.”

Tiron says there’s something wrong in the fields where the bees collect nectar: “The varieties of oilseed rape and sunflower they grow today give less nectar. Lavender used to flower for three to four weeks. Now it’s just one. They used to start harvesting earlier, and didn’t bring in the whole crop at once. It was cut by hand with sickles and the bees had time to collect nectar and fly on ahead of the pickers. Now they have machines that suck up the flowers, and the bees along with them.” Something is wrong with the bees, too. “Colonies are smaller and the queens don’t live as long. I used to have hives that produced with the same queen for three or four years in a row. Now they live two years at most.”

There are many reasons for this decline, but all are related to the growing pressure put on ecosystems for commercial gain. One is the parasitic varroa mite, which has infested most colonies. It reproduces inside sealed brood cells, feeding on the haemolymph (“blood”) of the immature bees. The mites originated in Asia and were transmitted to European honeybees when they were introduced to East Asia in the 1950s, spreading rapidly along global trade routes. In recent years, another predator, the Asian hornet, has arrived in Europe by these same routes and is giving beekeepers problems.

Another problem is pesticides. The long struggle for recognition of the carcinogenic properties of tobacco shows how heavy the burden of proof can be, including on scientists, when a product is marketed on a huge scale by multinational companies. But research is revealing the impact of neonicotinoid pesticides. One recent study suggests that they triple mortality among wild bees; another links colony failure among honeybees to low sperm viability.

The number of hives has fallen by half in the United States and by a third in Europe since the 1960s, and—though hive numbers have stabilized at around 17 million in Europe and 2.6 million in the United States in the last decade—the number of beekeepers is still falling. Commercial operations today have more hives and higher expenses and must work harder. Reproduction has become a greater concern than honey production, with many beekeepers forced to buy colonies from specialist breeders. Italy has become a major supplier of bees in Europe; New Zealand exports them to Canada (35 tonnes in 2015). Beekeepers must also breed queens, or buy them from professional breeders, to replace queens in unproductive hives and speed up colony production.

Except in a few remote areas, beekeeping is no longer part of a gathering economy, and has long been a commercial operation involving exploitation and transformation of the natural environment. Karl von Frisch, who deciphered the language of bees, wrote: “Beekeepers are in the habit of taking so much honey from their colonies that the reserves they leave the bees are no longer sufficient for winter. They therefore give each colony between two and five kilograms of sugar in the autumn, in syrup form. This suits the bees perfectly, and is highly advantageous for the beekeeper as honey is worth far more than the price of sugar.” There is debate as to the merits of feeding bees sugar, and some beekeepers try to keep it to a minimum, but most are mainly concerned with finding the best or cheapest syrup. To combat varroa mites, hives must also be treated once or twice a year, with synthetic acaricides such as amitraz, or with oxalic acid, formic acid, or essential oils.

In Europe and North America, beekeeping is becoming a full-time occupation, with the economic dependency that entails, rather than a sideline. Beekeepers face the same choices and problems as other agricultural actors: inputs, setup costs, health treatments, production methods, income. They are well placed to observe the harmful effects of some practices followed by farming colleagues, but they face similar constraints and use the same global trade routes. Food-grade plastic is starting to replace imported wood in beekeeping materials; sugar mostly comes from Brazil; and the same huge Chinese factories produce amitraz, used to fight varroa mites, and imidacloprid, a neonicotinoid pesticide on which a ban is sought for the sake of the bees.

Most beekeepers in temperate regions face similar problems, but, for the moment, things are not the same elsewhere, especially in Australia, where European honeybees have been introduced. Strict customs controls on plant materials and animal products have kept the country free of varroa infestation, and Australian bees also have a lot of space, so beekeepers have not reported exceptional losses. Colonies have returned to the wild and multiplied until in some areas they are now considered an invasive species. In some protected areas, eradication programmes aim to curb their competition with native species through their choice of nesting sites.

Globally, the number of hives has more than doubled in the last 50 years, and there are now 83 million, compared with 49 million in 1961, according to the UN Food and Agriculture Organization. Though wilderness destruction is not slowing, industrial agriculture is not yet as widespread in Sub-Saharan Africa and tropical America as it is in temperate regions. African honeybee varieties are more resistant to varroa mites and are able to migrate when conditions become unfavorable. One African variety, Apis mellifera scutelatta, was accidentally introduced to tropical America, where it has fared well, replacing European varieties introduced during the colonial period.

Wild honeybee colonies also thrive in these regions. In South Africa, in an area less suited to honeybees than Europe’s forests and where there is no beekeeping, population densities of 12.4 to 17.6 colonies per square kilometer have been measured. In Germany, where beekeeping is widespread, the same study found densities of 2.4 to 3.2 colonies per square kilometer, corresponding to the density of colonies managed by beekeepers and the average population density for Europe.

But in some parts of the United States, especially California, wild colonies have almost disappeared. It seems likely that the only honeybees surviving there have become fully domesticated and are entirely dependent on human support. Their disappearance as a wild species in a large part of the temperate regions, and their transformation into livestock unable to survive without humans, says much about the loss of biodiversity due to the growth of industrial agriculture, and shows what may eventually happen in tropical regions, where wilderness destruction continues at an unprecedented pace.