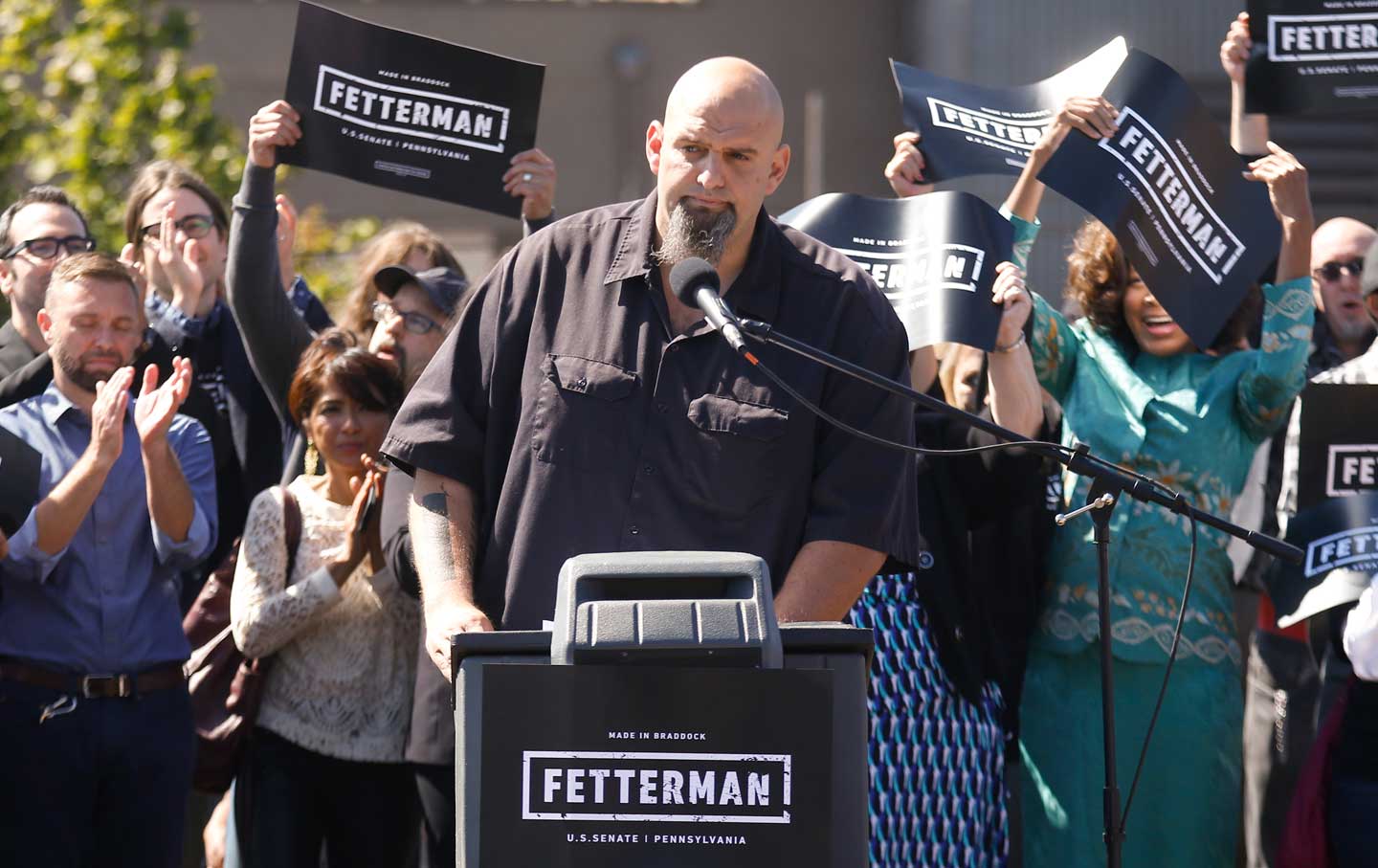 John Fetterman is campaigning to represent Pennsylvania in the US Senate. (AP Photo / Keith Srakocic)

Braddock, Pennsylvania—John Fetterman says that if it wasn’t for Bernie Sanders, he would never have dreamed of running for the US Senate in Pennsylvania. “When Sanders ran, that opened up a level of awareness in this state, that the issues I care about can make a viable campaign,” Fetterman told me. Fetterman’s campaign themes are indeed familiar if you’ve been watching Sanders’s rise: economic inequality, trade deals that bleed manufacturing jobs and kill communities Fetterman’s, racial justice, police violence, and a war on drugs that has fueled an explosion of addiction and incarceration.

Fetterman, who was first elected mayor of Braddock by one vote in 2005, took me on a tour Monday of devastated towns up and down the “Mon Valley.” The banks of the Monongahela River were once the center of global steel production, but the peak population of over 20,000 plummeted to about 2,100 by 2013. Fetterman, his wife, and their three young children live in a converted automobile showroom directly across the street from US Steel’s mammoth Edgar Thomson Steel Works. From his front doorstep we made our way to McKeesport, Clairton, and Monessen, passing through block after block of gutted shops, shuttered homes, crumbling churches, idle factories, and the wreckage of American manufacturing.

Thanks to Fetterman’s efforts, Braddock actually shows some signs of life: not just vibrant street art and urban gardens in the shell of an abandoned mill, but an urgent-care center, a biodiesel recycling plant, and a “Free Store” that offers hard-pressed residents food, clothing, and children’s toys. (The store was the brainchild of Fetterman’s wife, Gisele, a native of Brazil who came to the United States as an 8-year-old undocumented immigrant, and whose mother worked as a housekeeper to pay for her children’s education.)

For the most part, though, these are towns that have been left behind—casualties not just of the North American Free Trade Agreement but of the twin epidemics of heroin and gun violence. As the white mayor of a largely African-American town, Fetterman wears his allegiance on his skin: His right arm is tattooed with 15104, Braddock’s ZIP code, while his left bears the dates of the nine gun deaths that have occurred on his watch. Fetterman, who came to Braddock to run a GED tutoring program after a stint in Americorps and a master’s degree in public administration from the Kennedy School at Harvard, says it was the shooting deaths of two of his students that first prompted him to run for mayor.

At 6 feet and 8 inches tall, with a shaved head, a goatee, and the build, as he says, “of a professional wrestler rather than a professional politician,” Fetterman would probably stick out in a crowd even without the tattoos. Like Sanders, his focus on economic inequality and urban reinvestment has meant that he is sometimes depicted as a single-issue candidate. But Fetterman also performed the first same-sex marriage in the state of Pennsylvania, and lists the “absolute protection of the right to safe and legal abortion” along with the repeal of Citizens United among his “litmus test” issues for any prospective Supreme Court justice.

Fetterman is currently running third in the Democratic primary polls, well behind Joe Sestak, a retired admiral and former congressman who unsuccessfully ran for the Senate in 2010, and Kate McGinty, Governor Tom Wolf’s former chief of staff. McGinty received the endorsement of President Obama and Vice President Joe Biden on Wednesday, and the Democratic Senatorial Campaign Committee endorsed her last week. She also has locked up endorsements from most of the state’s Democratic officials. McGinty is backing Hillary Clinton in the Democratic presidential primary.

When Obama was under fire here for his comments in 2008 that in “small towns in Pennsylvania…it’s not surprising [that residents] get bitter, they cling to guns or religion” because the jobs are gone, Fetterman was one of his few defenders. But that wasn’t enough to attract Obama’s backing in the primary. The Democratic establishment is also disinclined to back Sestak, not least because he beat Arlen Specter in the 2010 primary. Specter had just switched to the Democratic Party and was the anointed candidate of the Democratic establishment.

Could the party’s chosen candidate lose once again? Despite her strong slate of endorsements, McGinty isn’t showing much momentum in the polls, which also show that a third of Pennsylvania voters remain undecided. She has never held elected office, but has worked as a consultant for the oil and gas industry.

If Bernie Sanders is elected president in November, he’ll need senators like John Fetterman to make the political revolution he talks about a reality. Fetterman, who endorsed Sanders long ago, remains a long shot. But if Sanders wants to show his insurgency has coattails—and his “Not me. Us” slogan means something—he could do a lot worse than inviting Fetterman on stage in Pittsburgh on Thursday.