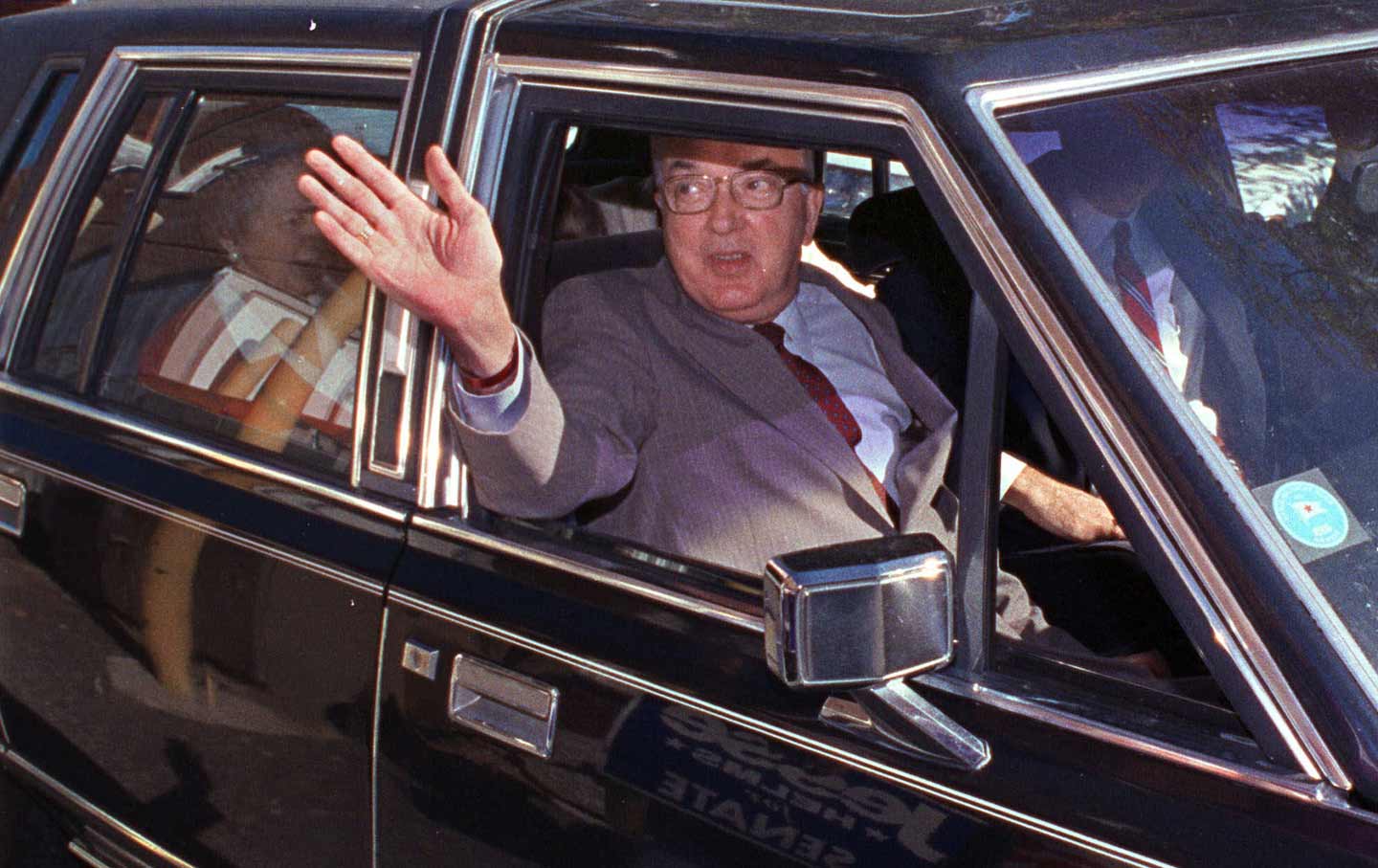 While Donald Trump mainstreams to become the Republican nominee, national political news has shifted to my home state of North Carolina, where the governor and General Assembly leaders are trying to trump the real-estate mogul in extremism—by suing the Justice Department for “federal overreach.” While the current debate may seem novel, this kind of political extremism is as old as the South. We’ve been fighting its current expression since Governor Pat McCrory and company took control of our state in 2013.

Media outlets have clamored about House Bill 2, the so-called “bathroom bill” that requires people to use public restrooms designated for their gender as defined on their birth certificate, as opposed to the gender with which they identify. Our state’s extremists claim the law protects women and children from sexual predators lurking in bathrooms. So-called “Christian” advocacy groups sanctify their talking points. The state’s governor calls HB2 a “common sense” measure that does not change state law one iota with respect to bathrooms, but simply codifies existing state policy. Commentators decry the bill as the most anti-LGBT legislation in the country. But nearly all news coverage focuses solely on the transgender bathroom question. Though it is only a five-page law and readily available, most reporters seem not to have read HB2.

“Hate Bill 2” is not a “bathroom bill” to protect women and children from the transgender boogieman. Instead, it is a cynical attempt to pit supposedly Christian values against the best interests of our families and the highest callings of our faith. Its advocates violate the principle of “love thy neighbor” in the name of a misguided interpretation of religion. Extremist lawmakers designed it to deploy homophobia, race, and class as political wedge issues.

It would be bad enough if HB2 merely targeted a widely misunderstood minority, but this reading shortchanges the scope and intent of the bill. HB2 also violates local governance and discriminates against the working poor by forbidding municipalities from raising the minimum wage or requiring contractors to require living wages, sick leave, vacation pay, or minority set-asides. In the name of protecting children, it specifically forbids local communities from passing any measure that might protect, in the words of the law, “the well-being of minors in the workplace.”

“Hate Bill 2” specifically forbids all North Carolinians from filing discrimination lawsuits in the state courts. This applies to every employee in the state. Of course, this ban is especially tough on workers who routinely experience discrimination—women, the differently abled, racial minorities, and older citizens, among others. In that sense, it discriminates on the basis of age, sex, religion, race, class, national origin, sexual orientation, gender identification, and disability all at once—in fact, it discriminates against everyone except employers. For employers, it opens the door to treating any and all workers unfairly, with a greatly reduced fear of consequences.

This egregious law harms virtually everyone, and its advocates expect to do so with impunity by mixing a poisonous brew of homophobia, racism, fear, and hatred. If it solely contained the piece targeting transgender people using public bathrooms, that would be hateful enough. But this bill uses transgender citizens as a scapegoat and a stand-in for LGBTQ people generally, for partisan and anti-labor purposes. In many ways, it echoes the politics of Amendment One, the anti-gay marriage constitutional amendment that passed in May of 2012 and which the US Supreme Court overturned. In both that instance and this one, the anti-LGBTQ politics were not about May, but about November; a key election drives this ploy, even though fear and prejudice lend it power.

If this seems somehow familiar, that is because these tricks come from an old playbook. In the 1890s, black and white North Carolinians formed an interracial “Fusion” alliance and swept the state elections, winning the governorship, both US Senate seats, and an invincible majority in the state legislature. Public schools, voting rights, and equal protection under the law were the trademarks of the Fusion coalition. This was the final expression of Reconstruction in North Carolina. The very notion of racial equality was so offensive to white conservatives that it inspired a swift and virulent backlash.

Two features of the backlash to America’s first Reconstruction are essential to note. First, the politics of white supremacy were deeply religious. White preachers helped lead the charge, terming the white-supremacy forces “the Redeemers” and framing equal justice for black Americans as a moral danger. At the same time, this moral menace was explicitly sexualized. Respectable newspapers portrayed black men as ravishing beasts, eager to rape white women. They decried “Negro domination” as a threat to white womanhood; in their red-hot propaganda, the closer a black man got to a ballot box, the more he looked like a sexual monster.

We remember Martin Luther King Jr.’s “How Long, Not Long?” speech from the Alabama state capitol at the end of the Selma to Montgomery march. But few recall that the Alabama state legislature responded with Act 159, citing evidence of “much fornication” among marchers and claiming that “young women are returning to their respective states apparently as unwed expectant mothers.” When Sheriff Jim Clark of Selma published his popular memoir the next year, he pointedly titled it I Saw Selma Raped.

A generation later, a new recipe for the same dish appeared on the Southern menu. In 1984, North Carolina witnessed a US Senate race that grabbed national and international attention. Popular Governor Jim Hunt faced right-wing icon US Senator Jesse Helms in what became the most expensive and perhaps the most contentious non-presidential election in US history. Hunt had been a respected governor with favorable ratings that had been as high as 70 percent. Helms, the incumbent, had favorable ratings of around 40 percent. Early election polls saw Hunt ahead by at least 20 points.

Helms decided to drive down Hunt’s numbers by transforming the farm boy turned education governor into the tool of black radicals and homosexual activists. In their first round of ads, a year and a half before the election, Helms used dark, threatening images of Jesse Jackson to identify Hunt with civil rights and Black Power. In a radio ad, the Helms campaign described Julian Bond as director of a fictitious “Black Pac” and a Hunt supporter. Later Helms hit Hunt on his support for “forced busing” and brought segregationist firebrand Strom Thurmond to campaign for him. But the centerpiece of this race-baiting campaign was Helms’s opposition to the proposed Martin Luther King Jr. holiday then before Congress. Helms himself filibustered the King holiday for a week, saying that King’s views were “not fundamentally different from those of the Communist Party USA.” Helms demanded to know whether Jim Hunt supported the King holiday, which of course he did.

Race-baiting was familiar, of course, but remained effective, as Hunt’s numbers dropped among white voters. But Helms brought a new twist, mixing racial issues with the politics of gay-baiting. His campaign bought blocks of ads in a local tabloid newspaper, The Landmark. The conservative publisher then ran an article entitled, “Jim Hunt is Sissy, Prissy, Girlish, and Effeminate.” Subsequent pieces charged that “the sexual deviants of this nation” supported Hunt. The newspaper claimed that Hunt had had a homosexual lover in college and questioned whether he still did. No libel lawsuit could undo the power of the groundless charges, which were echoed in the mainstream media.

The historical pattern is clear: Whenever established power brokers have felt threatened, they have responded by stirring up racial and sexual fears. This politics of fear and divisiveness was clear in Amendment One in 2014 and has reappeared in HB2. Their advocates don’t care that the courts will overturn these unconstitutional measures and do not mind wasting tax money or feeding fear and hostility for their partisan purposes. HB2 is not a “bathroom bill” but instead an electoral device and a way to preserve anti-democratic voting laws, apartheid redistricting, tax cuts for the very wealthy, and attacks on public education.

Hundreds of corporations, municipal governments, national conferences, and performing artists have boycotted North Carolina in protest against HB2. While I’m grateful for their support, I cannot join their tactic. North Carolina is my home. As much as it grieves me to watch a new act of the same old drama, I also celebrate signs that the show is almost over.

The extremism we have witnessed in North Carolina over the past four years, now on national display in HB2, is a reaction against our home-grown multi-ethinic, pro-justice, anti-racist, anti-poverty, anti-discrimination coalition of more than 220 community-based organizations and over 100 branches of the NAACP. As painful as it is to watch, the extremism of our current government is a confirmation of our coalition’s power. They would not be resorting to these tired and worn-out tactics if they did not know their days are numbered. We have seen what North Carolina’s future looks like—and they have too. As we continue to fight hate in the courts, at the ballot box, and in the streets, we continue to hold out an open invitation to our neighbors who’ve been goaded by fear: “All are welcome here. Come and join the winning side.”