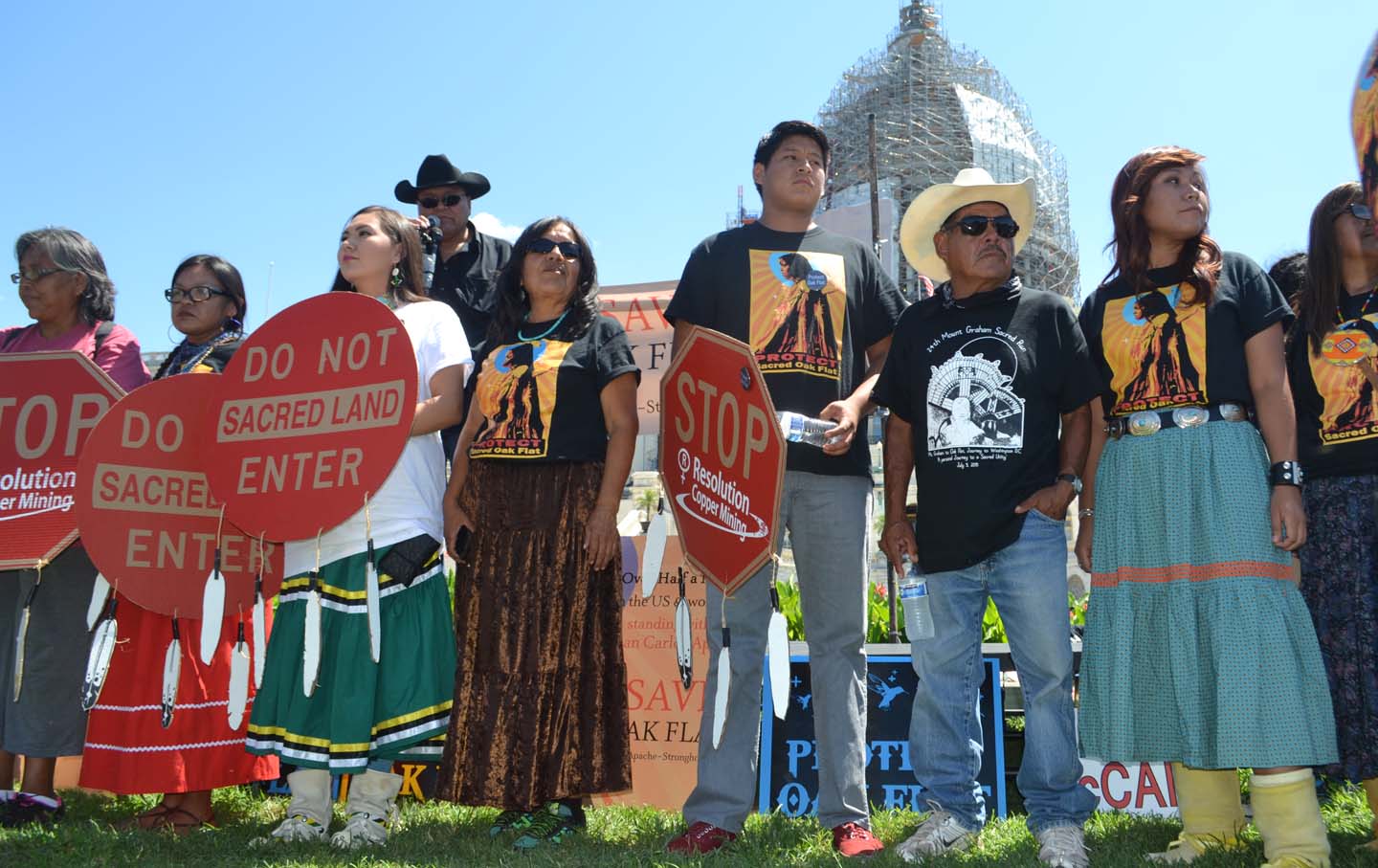 In front of the US Capitol, Native Americans protest a planned cooper mine in Arizona. Joseph Huff-Hannon

The tribal drums began beating outside the Capitol at noon. Dozens of activists from the San Carlos Apache tribe were gathered on the West Lawn, flanked by hundreds of supporters, with a clear message for Congress: Our sacred land is not for sale.

For many it was the last stop on a weeks-long cross-country journey to save a stretch of land in southeastern Arizona, revered by the Apache, from a massive mining project. One by one, Apache, Navajo and other tribal representatives took the stage, many of them in ceremonial camp dress. The procession was punctuated by calls to “Warrior up Apache,” and “Save Oak Flat!”

“I am not afraid to stand up for who I am,” said 16-year-old Naelyn Pike, “because I am Apache, because I believe in the creator, because I want to protect the mother earth.”

Last December, the Senate passed the $585 billion National Defense Authorization Act. Tucked deep inside the 697-page bill, which covered everything from military pay to training programs for Iraqi security forces, was a land exchange provision handing over 2,400 acres of Arizona’s Tonto National Forest to Resolution Copper. The land exchange rider, introduced at the last minute, went largely unnoticed—but not by the San Carlos Apache.

For nearly a decade, they had successfully fought to protect a stretch of the park known as Oak Flat from Resolution Copper, a joint venture between foreign mining giants Rio Tinto and BHP Billiton. The Apache and other local tribes consider the land holy and have used it for generations to hold religious ceremonies, from acorn gathering to coming of age rituals.

Since the defense bill passed, Apache activists and tribal leaders have redoubled their efforts to save Oak Flat from mining that could create a crater up to two miles wide and a thousand feet deep. They’ve occupied the land since February and built a grassroots movement called Apache-Stronghold that caravaned across the country visiting other tribal nations and opening concerts for rock legend Neil Young. This week, after three weeks on the road, they brought the fight to Washington. (Disclosure: the organization I work for, Avaaz, has been supporting the Apache’s efforts.)

Councilman Wendsler Nosie Sr., a former tribal chairman who is leading the effort to save Oak Flat, compares the site to Mount Sinai. “It’s our holy and sacred site,” he told The Nation. “Throughout time, these places have been destroyed, but now by itself [Oak Flat] has shown us enough is enough, that we have to draw the line to protect.”

Nosie is hopeful but well-aware of the obstacles ahead. Many Arizona lawmakers, including Senators John McCain and Jeff Flake, support the mining proposal and have ties to the mining industry. McCain, in particular, reaffirmed his support for the deal the same day as the Apache’s rally, calling the defense bill’s rider, “a bipartisan compromise arrived at after a decade of debate and public testimony.”

The mine’s congressional supporters argue the project will inject desperately needed jobs and money into an economically depressed community. But tribal leaders like Chairman Terry Rambler question the number of jobs the mine would bring.

And the San Carlos Apache have allies in Congress as well. Last month, Rep. Raúl Grijalva of Arizona, co-chair of the Progressive Caucus, introduced bi-partisan legislation to repeal the land exchange, calling it a “sweetheart deal”.

“We’ve been consistently opposed to this,” Grijalva told The Nation. “The historical irony in this whole thing is we’re violating a First American sacred site in order to facilitate a mining deal for a foreign mining company.”

Apache-Stronghold also has the backing of a growing number of tribal associations, including the National Congress of American Indians, which voted to support the effort to repeal the land exchange earlier this year. And over 1,000,000 people have signed an Avaaz petition calling on Congress to save Oak Flat.

The growing support for the tribe’s fight, propelled into the national spotlight by a New York Times op-ed this spring, was on display at this week’s Save Oak Flat rally. On stage with Native American activists were speakers from the Sierra Club, the Center for Biological Diversity, the Progressive National Baptist Convention, and a steady stream of House members.

At the rally, Noel Altaha sat under the shade of an umbrella, wearing a skyblue Apache T-necklace emblazoned with her name and an eagle, symbolizing her tribal clan affiliation. She joined the Apache-Stronghold’s caravan in New York, where members of the Tribe held a flash mob in Times Square last week.

Altaha spoke briefly in Apache before explaining her opposition to the mine, and her fears about the effects a mine would have on the sacred site, the area’s water supply, and on the safety of Apache women. “When you take away a person’s identity,” she said, “you take away their rights as an individual.”