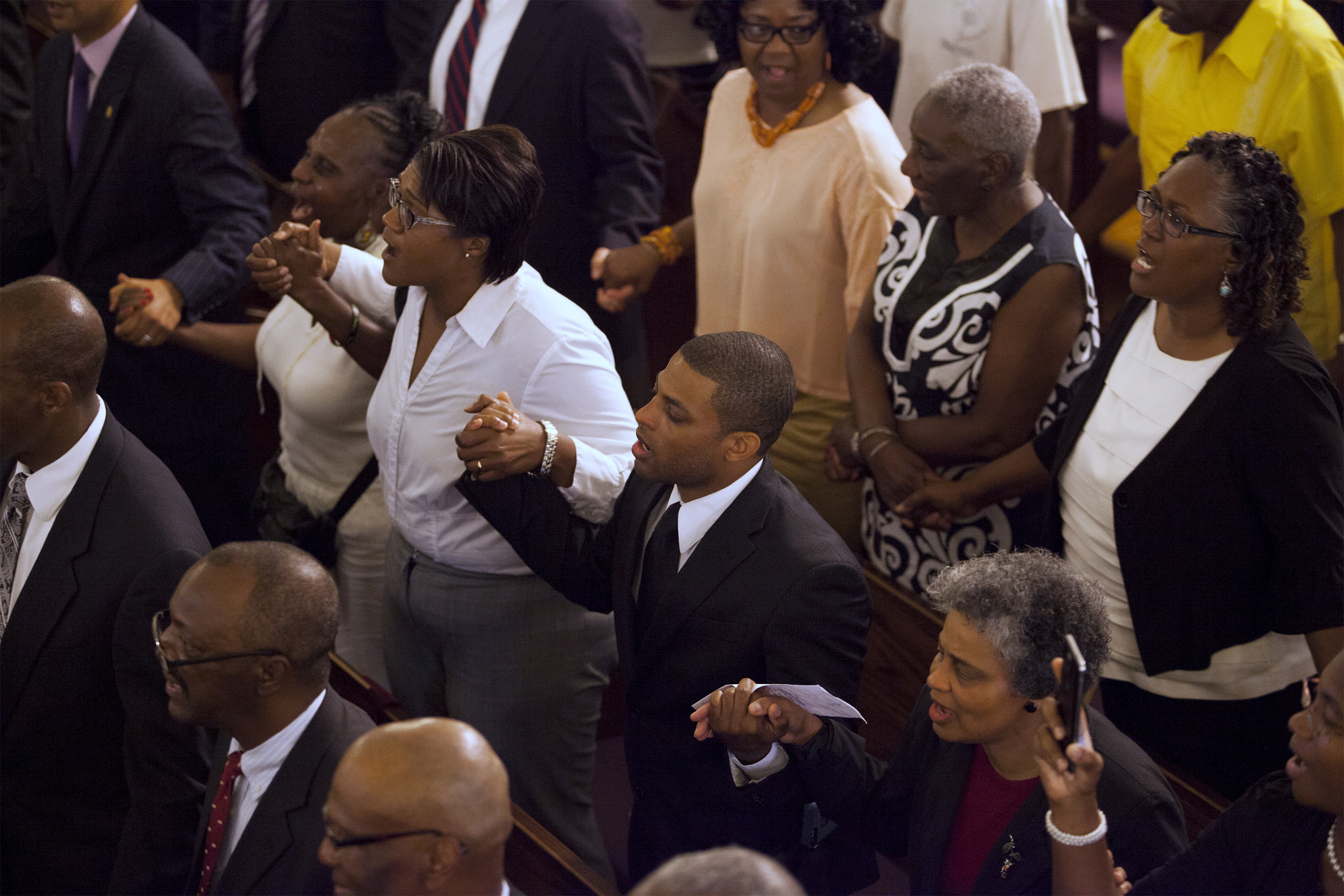 Before opening fire in a Charleston, South Carolina, church last night, Dylann Storm Roof reportedly sat for an hour alongside those whose lives he would soon snuff out. News reports haven’t gone into great depth about what happened in the church prior to the shooting, but imagine the scene: smiles and nods in his direction from the older black women, Bibles in their laps. Picture those gathered accepting this young white man into their midst and offering commonly uttered phrases like, “Welcome, brother” and “Glad you can be with us tonight.” According to NBC News, Roof told police that he “almost didn’t go through with it because everyone was so nice to him.” It seems the man who would soon kill nine people was accepted without fanfare as just another person called to pray on a Wednesday night.

So how abruptly the mood in that sanctuary must have changed when 21-year-old Roof told those who had assumed best intentions, “I have to do it. You rape our women and you are taking over our country.” How many of them blamed themselves while pleading for their lives (they had time to—the gunman is reported to have reloaded his clip five times)? How many of them reflected on whether they could have anticipated such hatred, whether they should have been more skeptical of this young man who turned out to be eaten up by white supremacy and delusion?

The Emanuel African Methodist Episcopal Church victims were mowed down in part because they allowed any boundary surrounding their place of worship to be porous. They trusted Roof to be respectful and humane. (Compare this with the McKinney, Texas, residents who were so intent on keeping presumed Section 8 dwellers away from their neighborhood that they involved police in an adolescent pool party.) The parishioners who were terrorized last night were not naive in their willingness to sit alongside the man who would soon kill six women and three men. Instead, they were engaged in a survival tactic as old as the black American experience: a refusal to let one’s heart harden or one’s joy fade in the face of the irrational, deadly actions that white supremacy can generate. Neither the daily reports of black people all over the country experiencing violence and discrimination at the hands of white authority figures nor whatever attacks these individuals had personally sustained kept them from welcoming a young white man into a church with deep roots in the black community generally and the black liberation project specifically.

Unfortunately, this orientation toward accepting at face value those who are in fact duplicitous is getting black folks in trouble these days. This past week, as the Rachel Dolezal story unfolded (and unfolded… and unfolded…) several observers pointed out that the Washington woman had taken advantage of an open-door policy to blackness ensured by the enduring relevance of the ‘one-drop rule.’ Dolezal was able to carry out her deception in part because black Americans aren’t typically in the business of policing others’ racial identity. If someone says they’re black, they’re black, and to push too hard for proof is a sign of not understanding how race has historically worked in this country. One drop of “black blood”—the kind spilled in that Charleston church, presumably—a black person made under the logic of slavery and Jim Crow. That logic continues in many communities today.

My inclination with the Dolezal story was to turn away from the spectacle and maybe send her some information on John Brown, Viola Liuzzo, Jack Greenberg, and other white Americans throughout history who committed themselves to black liberation without feeling the need to create a ridiculous persona to carry it out. But news of the Charleston shootings has made me take a second look at that recent flashpoint in ongoing conversations about blackness and its meanings. Many black Americans—the kind who welcomed both Roof and Dolezal into their midst—maintain a commitment, even unconsciously, to assuming best intentions and refusing to let bitterness and cynicism get the best of them.

It’s a shame that these recent betrayals, from yesterday’s attack on black lives to the relatively insignificant sham exposed last week, have taken advantage of those who see the benefit in welcoming strangers, valuing inclusion and accepting people on the basis of who they say they are.