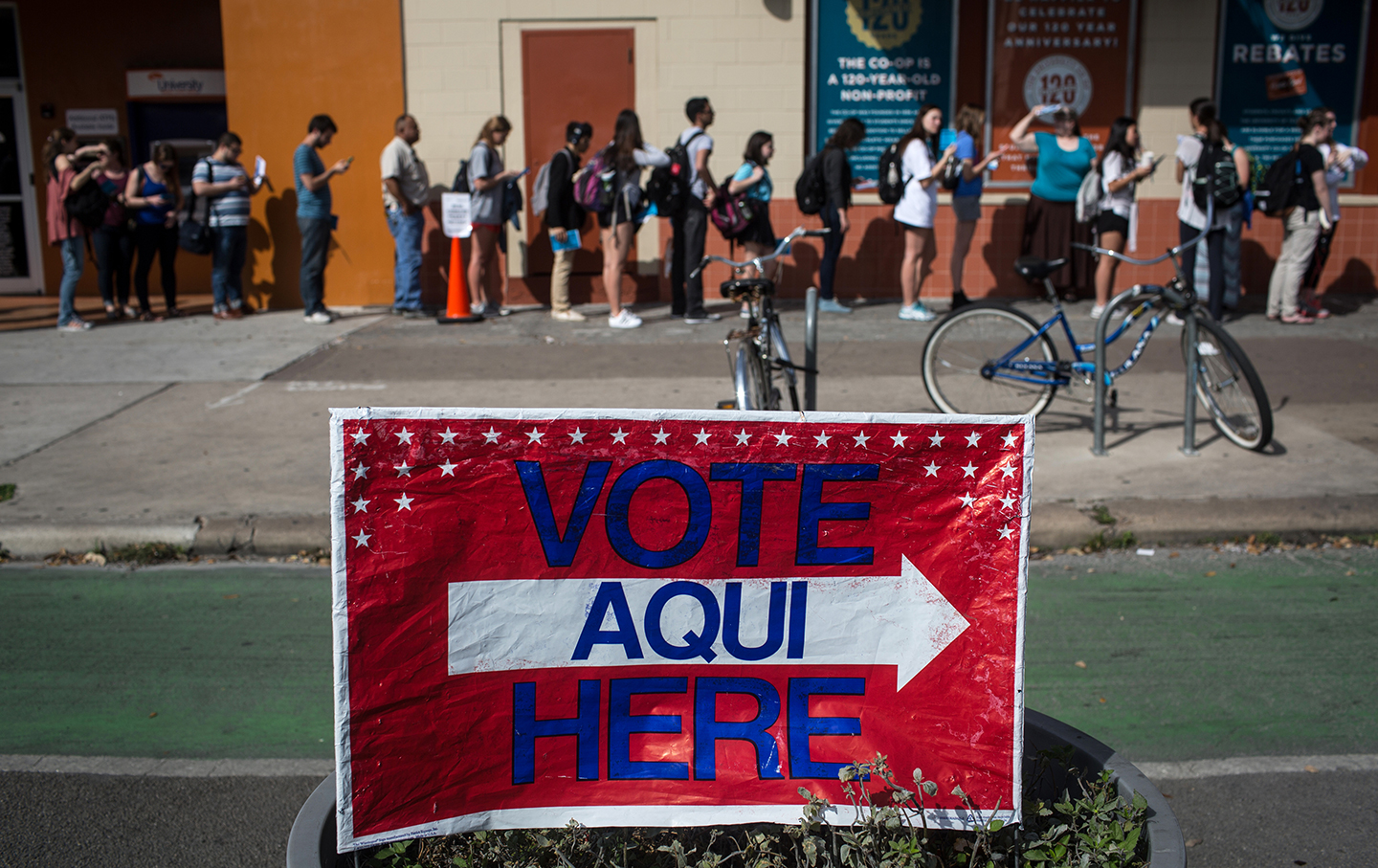 Voters wait in line to cast their Super Tuesday ballots at a polling station located at the University Co-op in Austin, Texas, on Tuesday, March 1, 2016.

On Friday night, a federal district court in Texas issued a bombshell opinion, ruling that three of Texas’s congressional districts were drawn to discriminate against black and Hispanic voters. The redistricting maps drafted by Texas Republicans after the 2010 census “intentionally diluted minority voting strength in order to gain partisan advantage,” wrote Judges Xavier Rodriguez and Orlando Garcia of the Western District of Texas.

The court found that Texas Republicans unnecessarily concentrated minority voters in certain districts to reduce their influence statewide while diluting minority representation in other districts, specifically naming Republican-held seats in South and Southwest Texas (CD 23 & 27) and a Democratic-held seat based in Austin (CD 35). This means Texas could gain at least two more Latino-majority congressional seats, which should favor Democrats. More importantly, the opinion paves the way for Texas to once again have to approve its voting changes with the federal government under the Voting Rights Act for a period of time.

Here are the relevant facts of the case: Texas added 4.3 million new residents from 2000–10. Nearly 90 percent of that growth came from minority citizens (65 percent Hispanic, 13 percent African American, 10 percent Asian). As a result, Texas gained four new Congressional seats, from 32 to 36. Yet under the congressional redistricting map passed by Texas Republicans following the 2010 election, white Republicans were awarded three of the four new seats that resulted from Democratic-leaning minority population growth. The League of Women Voters called the plan “the most extreme example of racial gerrymandering among all the redistricting proposals passed by lawmakers so far this year.”

Texas Republicans went to extreme lengths to thwart the state’s changing demographics, as I reported in my 2012 article “How the GOP Is Resegregating the South”:

Only by reading the voluminous lawsuits filed against the state can one appreciate just how creative Texas Republicans had to be to so successfully dilute and suppress the state’s minority vote. According to a lawsuit filed by a host of civil rights groups, “even though Whites’ share of the population declined from 52 percent to 45 percent, they remain the majority in 70 percent of Congressional Districts.” To cite just one of many examples: in the Dallas-Fort Worth area, the Hispanic population increased by 440,898, the African-American population grew by 152,825 and the white population fell by 156,742. Yet white Republicans, a minority in the metropolis, control four of five Congressional seats. Despite declining in population, white Republicans managed to pick up two Congressional seats in the Dallas and Houston areas. In fact, whites are the minority in the state’s five largest counties but control twelve of nineteen Congressional districts.

Texas’s voter-ID law, which was passed at the same time as the redistricting maps, was also judged to be intentionally discriminatory by a federal court in October 2014. As the federal court noted, “the Texas Legislature enacted its 2011 redistricting plans in the context of strong racial tension and heated debate about Latinos, Spanish-speaking people, undocumented immigration and sanctuary cities, and the contentious voter ID law.” Federal courts initially blocked both the voter-ID law and the redistricting maps in 2012, but the decisions were voided in June 2013 when the Supreme Court gutted the Voting Rights Act.

There’s already been a hearing in the Texas voter-ID case and one will occur in the redistricting case soon to determine whether Texas will be “bailed-in” to the Voting Rights Act and have to once again approve its voting changes with the federal government for up to ten years. (Before a hearing on February 28, the Trump Justice Department reversed the Obama Administration’s position that Texas’s voter-ID law was intentionally discriminatory.)

This is a potentially big victory for voting rights, but in truth neither of these laws should have seen the light of day after the courts initially blocked them. Texas’s elections have been tainted since the Supreme Court weakened the Voting Rights Act. The evidence of intentional discrimination in these opinions shows why it’s so important for Congress to restore the law.