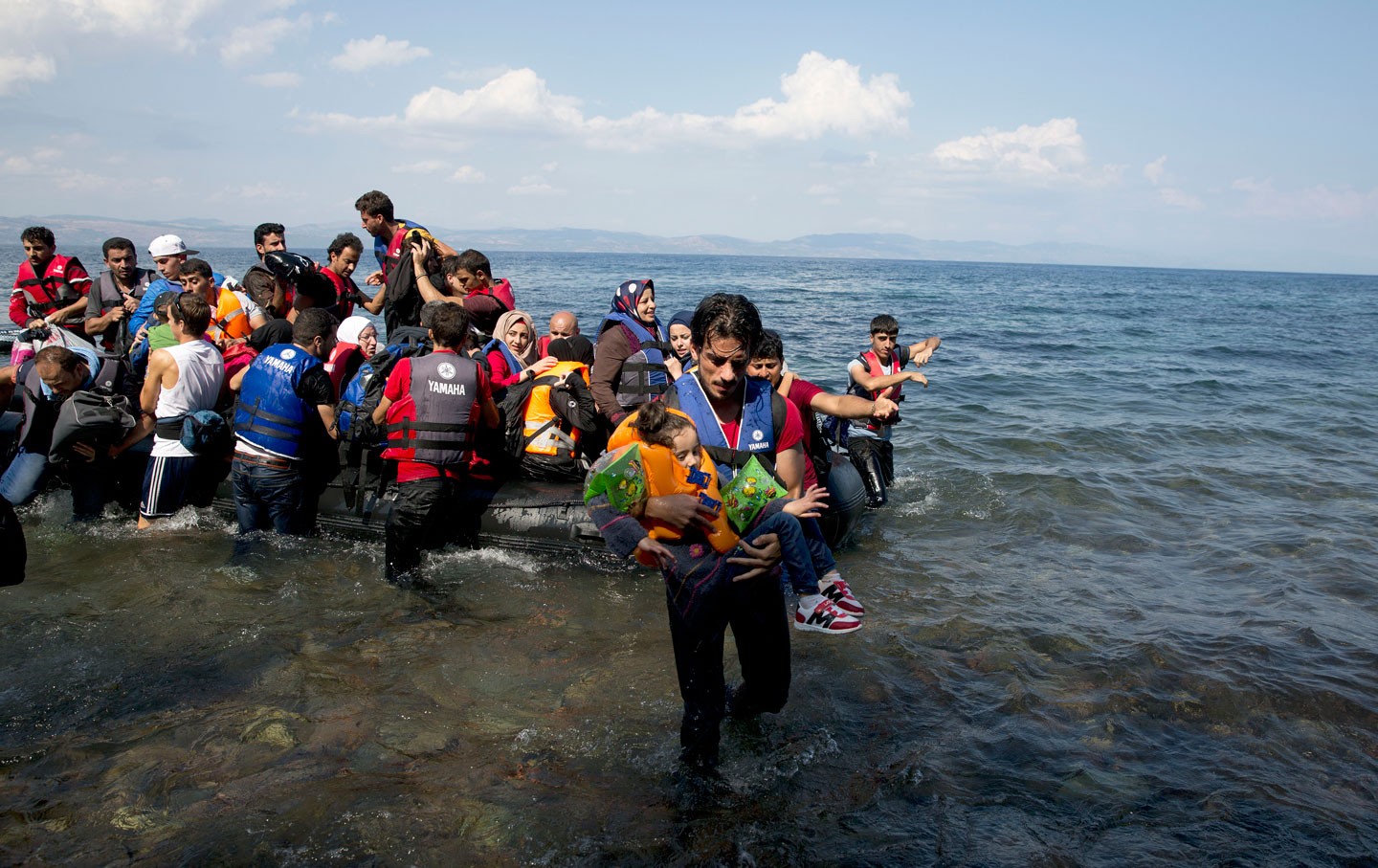 A man carries a child as migrants and refugees arrive to Greek island of Lesbos. (AP Photo / Petros Giannakouris)

The Syrian refugee crisis is a global call to action—and the United States must do more to help and support those fleeing violence in their home countries. The Nation, along with our editor and publisher, Katrina vanden Heuvel, has partnered with MoveOn to call on the United States to take in at least 65,000 Syrian refugees before the end of 2016. To join the call, sign our petition below.

You can also donate to help organizations doing vital work with refugees on the ground. The United Nations Refugee Agency provides access to food, shelter, and schooling to hundreds of thousands of refugees around the world. In Greece, Medecins du Monde provides free healthcare services for refugees and migrants arriving on that nation’s shores, as well as shelter for some particularly vulnerable asylum seekers.

Fueled by the political turmoil in Syria, the refugee crisis has resulted in the displacement of millions of families. The images of 3-year-old Alan Kurdi, the Syrian child who drowned while attempting to flee the violence in his home country, should inspire a call to action that the United States cannot ignore.

As we have written at The Nation, the United States and many other wealthy nations have failed gravely in their response to the growing numbers risking their lives to flee war or poverty. We recently reported on the plight of refugees arriving in Greece and the perils they face because of this inaction. Refugees from Syria and other countries encounter sometimes deadly conditions on land and by sea, and must face extreme violence and danger on their journey to safety.

The United States bears a special responsibility to respond, because our invasion of Iraq, decision to funnel weapons into the region, and failure, along with other countries, to find a diplomatic solution have helped to fuel the violence. Since the Syrian conflict’s beginnings in 2011, the United States has taken in only about 1,500 Syrian refugees. Even with the Obama administration’s promise to take in at least 10,000 next year, we must do much more. Germany has responded to the crisis by agreeing to take in 800,000 refugees from Syria and other countries in turmoil.

The US must do more to help these families. To begin, we’re calling on the United States government to heed the call of aid organizations and concerned politicians and take in at least 65,000 Syrian refugees before the end of 2016.

Editor’s Note: The original version of this action stated that the US was planning to take in just 5,000 to 8,000 more Syrian refugees. Shortly after publication, the Obama administration announced it would accept at least 10,000 more refugees. The text has been updated to reflect this change.