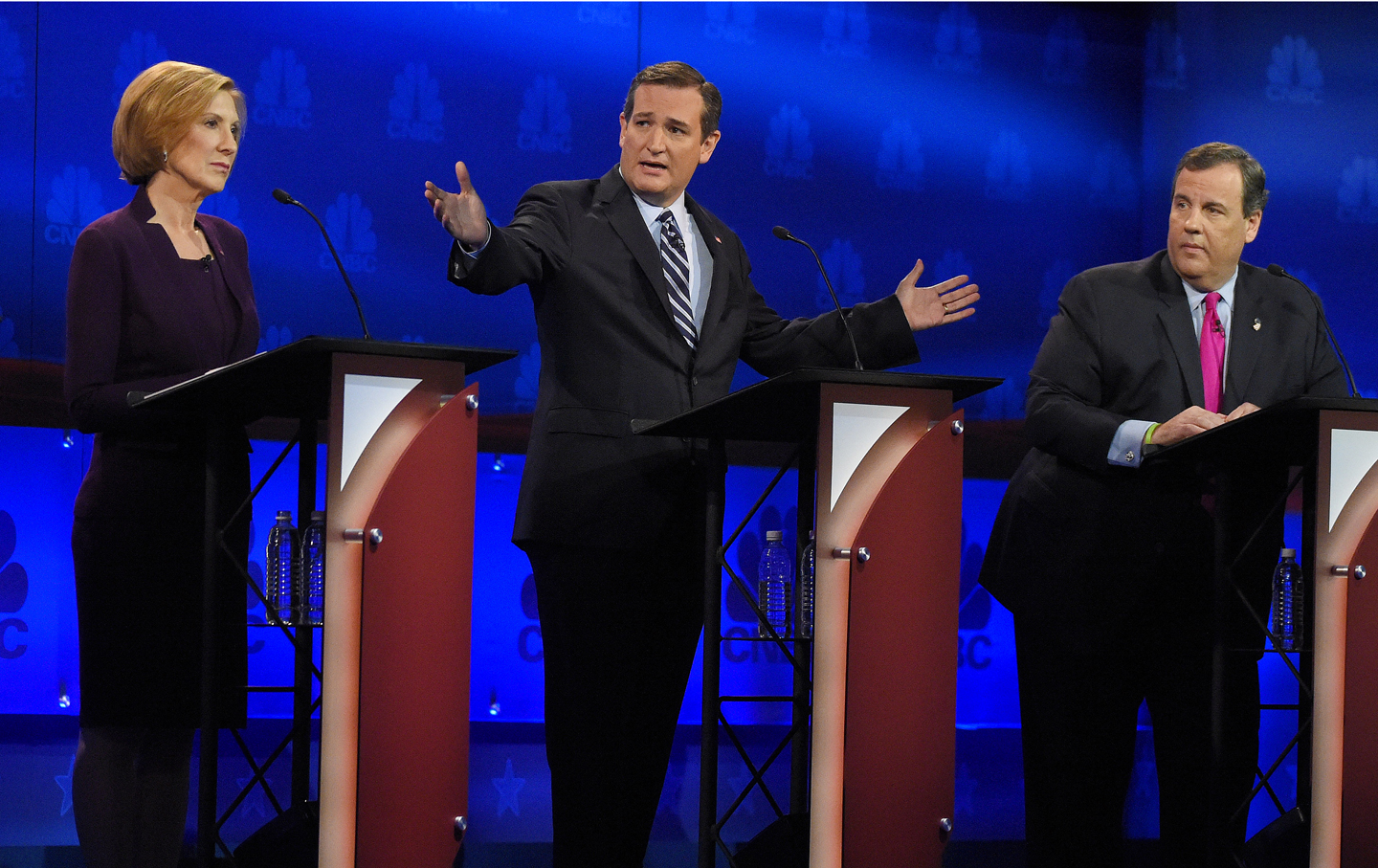 I rarely agree with Senator Ted Cruz, but he has a great idea: He wants conservative talk-show hosts/demagogues Rush Limbaugh, Sean Hannity, and Mark Levin to moderate a GOP debate.

Let’s be clear: The Republican whining about debate moderation to date is pathetic. They smacked CNBC moderators like piñatas Wednesday night, and they’ve continued battering them through the week. You’ll recall that Donald Trump savaged Fox News moderator Megyn Kelly in the most sexist way after the first debate. These guys are first-rate cry babies, working the refs by crying “liberal media bias!” like conservatives have for going on 50 years.

You can take issue with a few of the CNBC questions–nobody but Jeb Bush cared much for the fantasy-football query–but, if anything, the moderators went too easy on the GOP contenders, who got away with astonishing falsehoods. Ben Carson brazenly lied about his disturbing ties to Mannatech, a nutritional-supplement company that’s paid millions to settle lawsuits about its fraudulent claims. Donald Trump lied when he said, “I was not at all critical” of Facebook founder Mark Zuckerberg for his efforts to advance comprehensive immigration reform and widen the H-1B visa program. Carly Fiorina lied when she claimed 92 percent of those who lost jobs in President Obama’s first term were women. Marco Rubio lied when he charged the media ignored evidence that Hillary Clinton was a “liar” at last week’s absurd Benghazi hearing.

If anything, the CNBC moderators went too easy on the GOP contenders, who got away with astonishing falsehoods

Republicans are also lying about the first Democratic debate’s being a love-fest between Anderson Cooper and the candidates. Clinton’s first question involved her alleged shape-shifting and flip-flopping on policy, Senator Bernie Sanders got pointed queries about whether he’s anti-capitalism, and former Maryland governor Martin O’Malley was grilled on charges that his policies led to over-incarceration when he was Baltimore mayor.

Meanwhile, Jim Webb and Lincoln Chafee got so little time, they wound up throwing in the towel within a week. If only the Republicans whose support hovers below 2 percent would have the self-awareness to do the same.

Far from it: Now the undercard candidates are teaming up with the top guns to try to wrest control of the debate process from the Republican National Committee. Representatives of every GOP contender save Chris Christie are reportedly meeting in Washington this weekend to plot against the RNC and the media.

“We need a change of format,” Carson told a press conference in Lakewood, Colorado. “Debates are supposed to be to get to know the candidates, what is behind them. What it has turned into is a gotcha.”

Ted Cruz got even more specific. “How about a debate moderated by Sean Hannity and Mark Levin and Rush Limbaugh?” Cruz suggested in an interview with Hannity. “Now, that would be a debate.”

“I’m in,” Hannity replied. “And I think I can speak for the other two—they’re in as well. I do agree with you because these questions are downright hostile. And I believe this was a horrible night for the news media and in many instances tonight a disgrace to the profession of journalism.”

I’m in, too! I think the world should get a clear look at the unvarnished spectacle of a Republican Party that is now run by the “conservative entertainment complex,” in the words of George W. Bush adviser David Frum.

Let the candidates stay within their wingnut bubble–the same bubble that let them believe Mitt Romney was cruising to victory in 2012–and compete over who can be the most vicious to undocumented immigrants, the cruelest to women seeking abortions, and the kindest to the top one percent.

Let the voters watch—and then cast ballots for the Democrats in droves next November.

Of course, the candidate revolt couldn’t happen to a more deserving guy. RNC Chair Reince Priebus used to say his proudest achievement was “taking control of the presidential primary debate process” for 2016. He denied MSNBC the chance to moderate, as the network had in 2008 and 2012, gave three debates to Fox News, and teamed up with conservative-radio network Salem on the CNN debates, “creating a debate environment that would bring honor to the Republican Party, not a debate environment spurred on by nefarious actors like Chris Matthews and others,” he told Salem’s arch-conservative radio host Hugh Hewitt last February.

In fact, at the CNN GOP debate, Hewitt prefaced a question by fawning, “I think all of you are more qualified than former secretary of state Clinton.” Needless to say, CNN did not partner with The Nation or Mother Jones to host a Democratic debate, or give any liberal journalist the chance to slobber over the Democratic field and trash the GOP before a national audience.

But Priebus’s pandering wasn’t enough for the whiny 2016 GOP candidates, who apparently want to be hugged, not grilled, by debate moderators. This is a party that’s running against reality, not against the Democrats. They kill the messengers, and now the moderators, who bring them bad news.