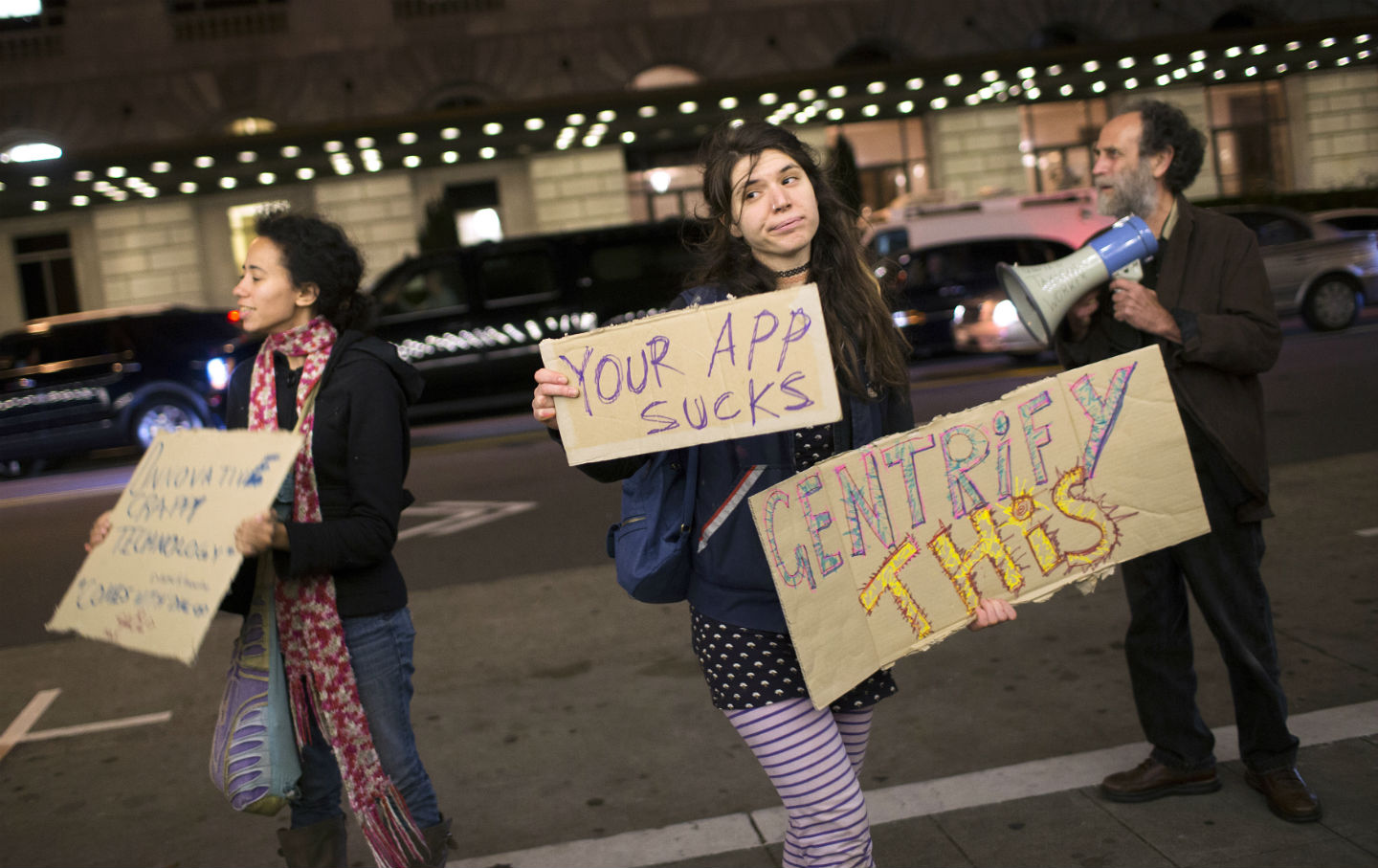 Demonstrators hold signs during a protest against Uber and Lyft in San Francisco in February 2015. (Reuters/Stephen Lam) (Reuters / Stephen Lam)

Despite all the hype about the Internet and its start-up offspring, the increase in fresh technological abilities has been accompanied by unprecedented levels of inequality. A small crop of high-tech companies now rank among the largest corporations on earth: Google ($368 billion in market capitalization), Facebook ($232 billion), and Apple ($742 billion), the last of which enjoys annual revenue—$183 billion—that makes it more prosperous than most nations. We’ve entered a new Gilded Age, with its own cutting-edge variations on yesterday’s robber barons.

The Internet and associated technologies reflect and amplify the winner-take-all economy in which they are embedded, inseparable from the political and financial revolution that has been unfolding since the 1970s. Our high-tech tools are constrained by market incentives and government surveillance interests that are often intertwined. As multiple authors demonstrate in the pages of this special issue, we cannot think about surveillance without paying keen attention to the corporations that benefit from it and the deep inequities that result.

Privacy, labor, equal opportunity, and consumer protections are being eroded or circumvented by digital tracking and the rise of “big data.” In various ways, the tech industry is chipping away at protections we thought we had already won. A century of labor gains is being undermined by the rise of venture-capital-funded, platform-mediated piecework (Uber, Lyft, TaskRabbit, and so on), the ever-present threat of automation, and new “productivity”-monitoring sensors and software that allow bosses to watch workers and eke revenue from them as never before. The surveillance future is here, and it is not evenly distributed: Those with the least power are disproportionately scrutinized.

Fortunately, the techno-triumphalist narrative has taken a beating lately. Edward Snowden played a vital role by revealing the collusion of state and corporate actors (Apple, Yahoo, Skype, Microsoft, Google) in promoting ubiquitous online surveillance through unrestrained data collection. At the same time, the growing awareness of the manipulation of platform users by invisible algorithms (for example, the now-infamous Facebook “emotional contagion” experiment) has sparked public outcry.

Displeasure with the tech industry gives us the opportunity to insist that we move beyond buzzwords like “open,” “free,” “participatory,” and “sharing” to more explicitly progressive aspirations. We must insist on meaningful discussions of public goods—“public” in the sense of ownership, not just as a setting on a social-media stream. We need to talk about redistribution and what a sharing economy worth the name would look like (see our forum on “platform cooperativism” at TheNation.com). The articles in this issue and the accompanying online forum point to many direct solutions: insisting that antitrust laws function to break apart the new info-monopolies; passing privacy regulations to halt the unrestrained data collection on Internet users; enshrining anti-surveillance as a basic union demand; exploring how a basic income might provide a solution to the problem of contingent labor and technological job displacement; and ending the revolving door between the surveillance industry and intelligence agencies.

Innovations in technology are fundamentally political, and our responses need to be political in turn. No doubt, the Internet opens up new avenues and opportunities for resistance, but new technologies will not solve the problems at hand: People acting collectively will. By understanding the digital landscape, we can better organize for a system that benefits us all.

Tim Shorrock, “How Private Contractors Have Created a Shadow NSA ”

Astra Taylor and Jathan Sadowski, “How Companies Turn Your Facebook Activity Into a Credit Score ”

Jessica Bruder, “These Workers Have a New Demand: Stop Watching Us ”

Virginia Eubanks, “Want to Cut Welfare? There’s an App for That. ”