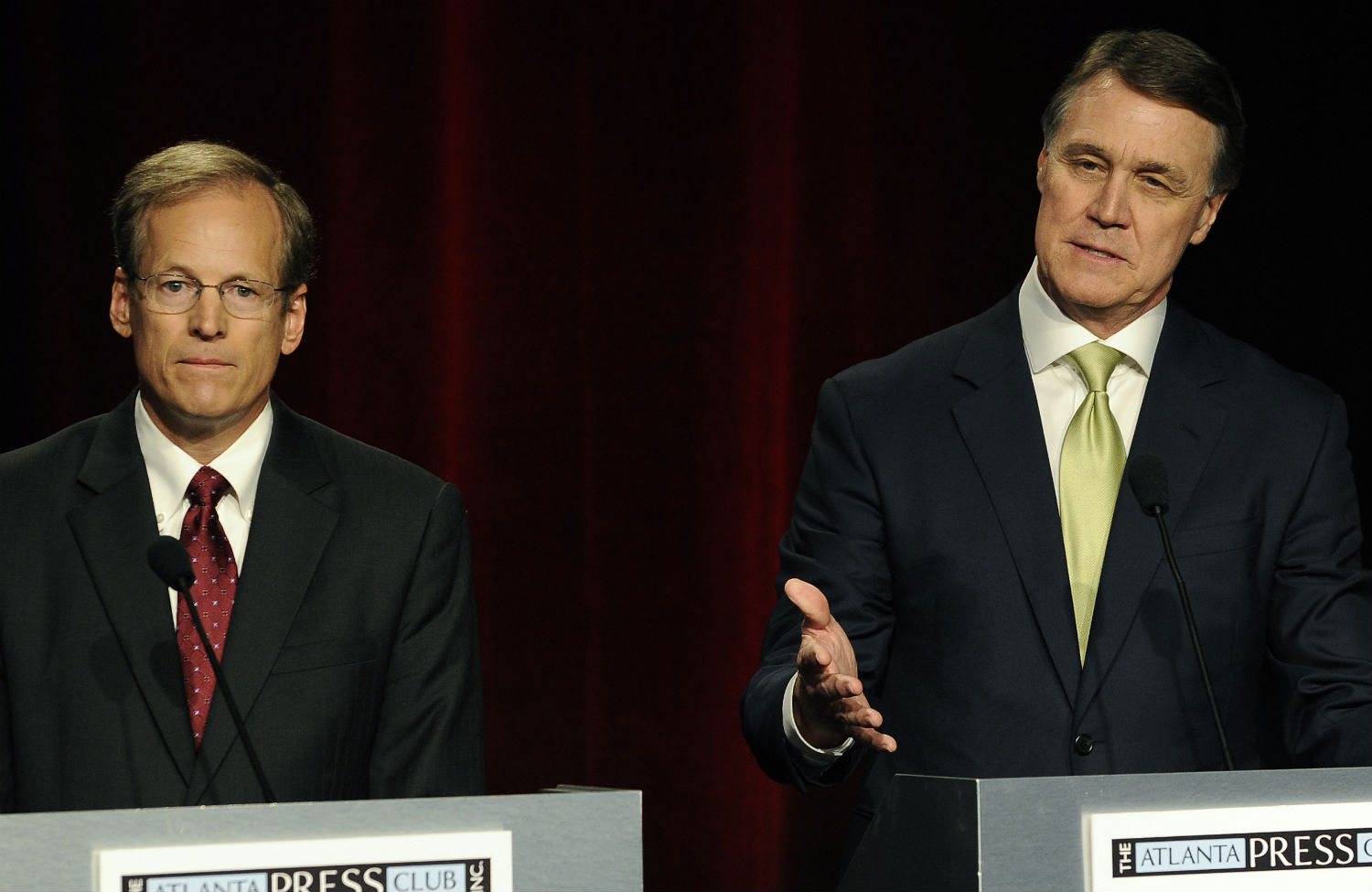 You’ve probably heard that the GOP establishment won big in Tuesday’s Republican primaries, with Tea Party favorites losing out to candidates backed by business groups. Take Georgia, for example, where an eleven-term congressman and a businessman worth at least $12 million will now embark on a nine-week runoff, while the two nuttiest candidates were easily weeded out, having secured less than 10 percent of the vote apiece.

What the establishment “won” in Georgia is a future nominee that will be easier to sell to voters in the general race against Michelle Nunn, the Democratic pick. The GOP’s first place finisher, David Perdue, is a telegenic management consultant and a former executive at Dollar General Reebok. He rose to the top of the heap via a campaign ad that depicted his opponents as crying babies. “Help me change the childish behavior up there,” Perdue said, while onscreen squalling infants crawled across on the grass in front of the Capitol. His opponent in the runoff will be Jack Kingston, a political veteran with support from the Chamber of Commerce and conservative figureheads like Sean Hannity.

What happened last night in Georgia was a beauty pageant, not a contest of meaningful political distinctions. Degrees of polish aside, there were few substantive differences between the establishment and the Tea Party candidates. Perdue sold himself as “the outsider” and a “hard-core conservative.” He doubts climate science, opposes gay marriage, wants to get rid of Obamacare, and has called raising the minimum wage “backward thinking.” He’s promised to oppose Mitch McConnell as majority leader. Herman Cain, the Tea Party choice in the 2012 presidential primary, said on his radio show that Perdue “looks like a mirror image of Herman Cain.”

Though his deep ties to Washington are fodder for attacks, Kingston is no moderate. He suggested that children should sweep floors in exchange for school lunch meals. He ran an ad—set it in some alternate America plastered in Help Wanted signs—bashing welfare recipients for “choosing a handout rather than a hand up.” He talked up his support for the Fair Tax, a regressive national sales tax scheme. He pledged never to stop fighting Obamacare. He’d like to repeal Dodd-Frank. He has a staunch conservative record in the House, voting for things like a “fetal pain” bill to ban abortion after twenty weeks.

One thing that did distinguish Kingston and Perdue from their competitors was the amount of money behind them. Perdue used more than $2 million of his own money ahead of the primary, and has said he doesn’t know if there’s a limit to how deeply he’ll reach into his own funds. Kingston attracted the most outside funding, with the Chamber of Commerce spending some $1 million in ads to support him.

So who lost in Georgia? It wasn’t the Tea Party, which succeeded in turning the contest in Georgia—and many others across the country—into a race to the right. If the terms “Tea Party” and “establishment” mean anything now as features of a candidate, they are distinctions in marketability, financing and rhetoric, not of ideology. As Matt Kibbe, president of the Tea Party group FreedomWorks, told The Washington Post, “Everybody is running against Obamacare and against overspending in Washington. It wasn’t always like that with the Republican establishment. I don’t even recognize [Kentucky Senator Mitch] McConnell from where he was a few years ago.” The establishment candidates beat the wingnuts by showing up at the same party, but in better suits.

In Georgia, it was the voters who lost. Turnout was anemic, down by tens of thousands from 2010 even among Republicans. The choices before them were narrow, the airwaves full of attack ads. Most of the money spent by outside groups—upwards of $4.6 million—went to advertising, dwarfing direct campaign contributions by a nearly four-to-one ratio. Now Georgians will get another nine-week dose of the same, as Kingston and Perdue duke it out.