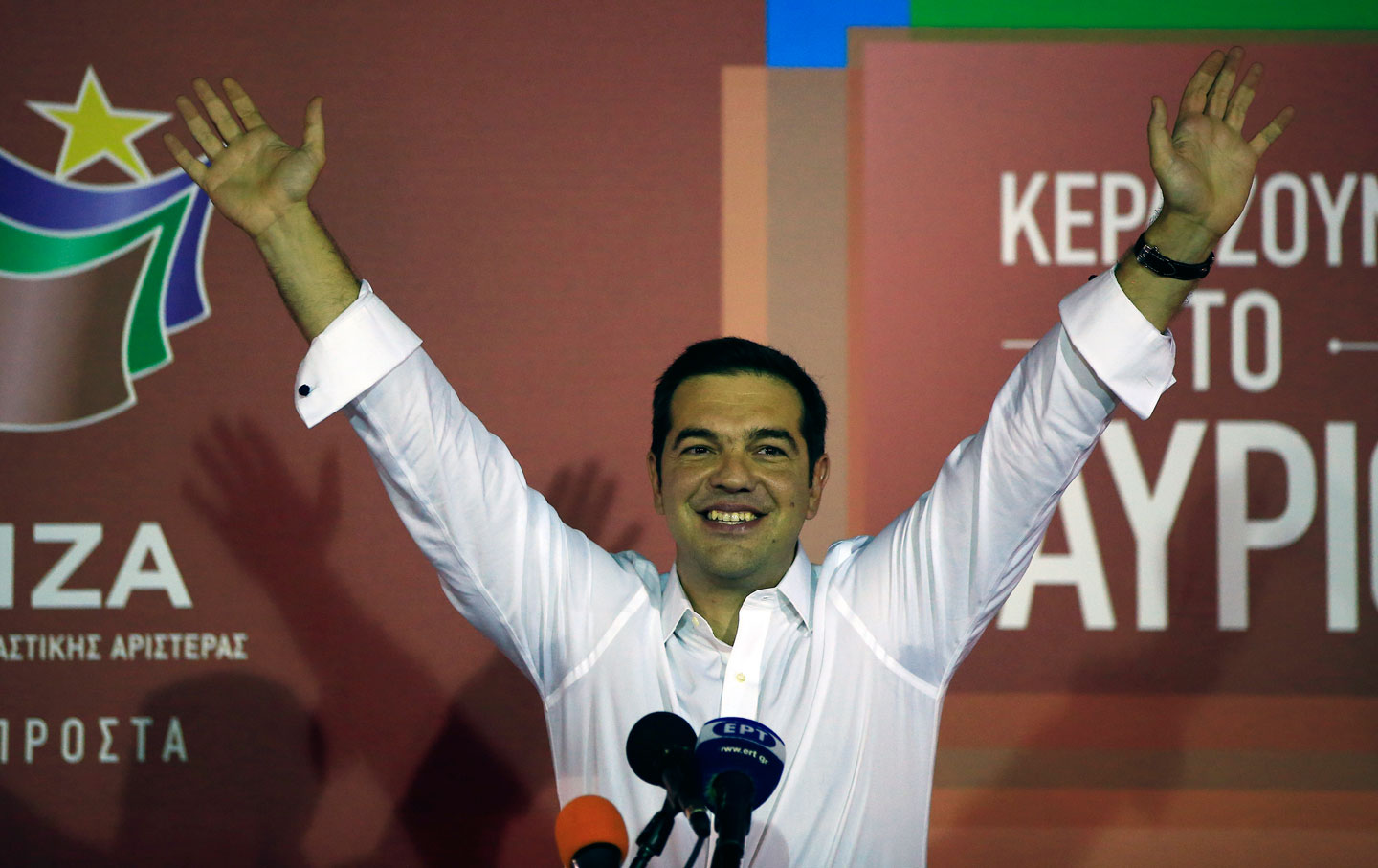 Alexis Tsipras, the leader of left-wing Syriza party, waves to his supporters after the election results at the party’s main electoral center in Athens. (AP Photo/Lefteris Pitarakis)

Alexis Tsipras’s Syriza came to power in January promising to end austerity and tear up the memorandum of measures imposed by Greece’s creditors. Outside Greece, many on the left celebrated the victory as the start of a new era, projecting all sorts of hopes onto the small, untried left party. Eight months on—after nail-biting negotiations with the eurozone, a resounding “No” vote in a referendum on new bailout terms, closed banks, capital controls, and rumors of impending Grexit followed swiftly by a capitulation to the creditors—Syriza has been re-elected as a pro-memorandum party, with almost as large a share of the vote as it had in January.

What happened? Are the Greeks crazy, fickle, confused, or all of the above?

This strange, suspended summer, the exhaustion in Greece was palpable. People tried to forget what had happened, to take in the heat and the light, to get on with their lives. All that “Hope Is Coming” and “Left for the First Time,” all that cheering and chanting, all those crowds and the “Historic No” of the Greek nation—what did they have to do with everyday reality, with bread and work and family, with what’s important here?

Sick to death of politics and politicians, most Greeks needed another election like a hole in the head. With the new memorandum a done deal, many felt it wouldn’t much matter which party had to enforce it. The campaign was a kind of shadow play, a parody of politics. The party leaders had little to say on pressing issues facing Greece beyond the bailout: the real economy, the refugee crisis, education, civil rights. Tsipras positioned himself as the man who could break with the old corrupt political system. Conservative New Democracy’s Evangelos Meimarakis played the part of a safe pair of hands, lambasting his opponent for bringing the country to the brink of catastrophe. The next few months may be among the most critical Greece has faced, yet it all felt wearily familiar, stale, and worn. On voting day, the abstention rate was the highest in many years. Polling places were empty, quiet—“like a visit to a sick friend where people talk in whispers,” in the words of musician Themis Andreades.

Yet in the end, despite the chaos of the last eight months, despite the humiliation of having hoped too much, despite the betrayal felt by many on the party’s left, enough people voted Syriza to make Tsipras the first Greek leader to keep his job after signing a bailout agreement. The scenario of the “left parenthesis” put about by the right before the last election has been put to rest. So has the politics of the forty-year post-dictatorship period, in which center-left and center-right alternated in power, each favoring its own clients and packing the civil service with its cronies and supporters. Almost everyone can see now where those practices have led. Syriza—which hasn’t yet had a chance to dip deep into that mire, and which may yet escape it—looks like the only alternative.

But this wasn’t only a lesser-evil victory. It has a deeper resonance, which I can best explain to myself in terms of theater. In the last eight months Tsipras has taken his country through a painful confrontation with intractable reality. The July referendum on a bailout deal that was no longer on the table made no rational sense at all; emotionally, though, it was a turning point, the crisis of the crisis. It brought both the “Yes” and “No” camps out onto the street, with so much force that some people worried about civil conflict. The “No” rally was enormous and exuberant: “Like being on another planet,” as a veteran of these things put it, “like nothing we’ve ever seen.”

It seems that was the last hurrah of planet “hope.” Days later, with the banks running dry and capital controls in place, Tsipras did the opposite of what he’d promised and what 61 percent of Greeks had voted for, signing the new loan deal that ties Greece to more austerity. Realistically, he had no choice. The creditors had deliberately strangled Greece’s banks; Syriza didn’t have (and probably couldn’t have had, whatever Yanis Varoufakis says) a plausible plan B. Most Greeks—including most “No” voters—wanted to stay in the eurozone. Like a classic tragic hero complete with flaws and hubris, Tsipras acted out Greece’s impasse—and the impasse of the left—dramatically, in real time, with real people’s lives.

“How can I support measures I disagree with, measures I know won’t work?” —a Syriza MP

The U-turn was traumatic for his party. The Left Platform’s departure was a foregone conclusion, but other MPs also agonized over whether to stand again, especially as Tsipras called the election without holding a party conference. “It’s like being in mourning,” one of them said to me. “With what conviction can I speak to voters now? And how can I support measures I disagree with, measures I know won’t work?” Syriza’s youth wing more or less disintegrated. Activists at Solidarity for All, which coordinates grassroots projects, asked themselves how they could organize against austerity while being funded by a party that now supports it.

Some say it takes a man of the left to betray the left. But my sense is that many Syriza voters reluctantly see the shift—clumsy and painful as it was—not as a betrayal but as a new realism, a catharsis even, that carries some relief. Only someone like Tsipras—who speaks the populist language of Greek radicalism, who connected with the victims of austerity, who was willing to fight for them almost to the point of destruction and show the scars to prove it—could have moved the country through the pro- and anti-memorandum split, even though (or perhaps because) it was opposition to the memorandum that brought him to power. As historian Tasoula Vervenioti put it, that split is “the tip of the iceberg,” a distraction at times from everything else that needs to be fixed: education, the media, the oligarchs’ power, the tight bond between church and state. In the event, some 70 percent of votes cast went to what are now pro-memorandum parties; the Left Platform’s new anti-euro Popular Unity didn’t even make it into Parliament. The Greeks have made the painful choice, in spite of everything, to bite the bullet and try to stay inside the eurozone.

“The memorandum is like Frankenstein’s monster. Syriza will try to tame it…but in the end I’m afraid it will destroy its maker.”

If this was an actual tragedy, Tsipras would now have to die a painful (political) death. Instead, he’s back in office. But the drama is far from over. Deadlines for “prior actions” and “key deliverables” to release the bailout funds are coming up thick and fast; the legislative program would challenge the most efficient and experienced administration. There are measures here that will deepen Greece’s long depression and hurt vulnerable groups, however hard Syriza tries to spread the burden better. Syriza MPs will balk at many of them, and the votes of Tsipras’ opportunistically loyal coalition partner—as before, the right-wing nationalist Independent Greeks—may not be enough to push them through. As a longtime activist said to me, “The memorandum is like Frankenstein’s monster. Syriza will try to tame it by injecting various potions, but in the end I’m afraid it will destroy its maker.”

Meanwhile, a thousand things need to be done to free the new Greece that’s struggling to climb out from the old—the creative start-ups and cooperatives, the first shoots of multiculturalism, the energy of the young who have opted to stay and fight rather than emigrate. Beyond a new citizenship law and a more humane policy on refugees and migrants, not very much got done by the first Syriza government, partly because it was preoccupied by the eurozone negotiations, partly because it was blocked by the civil service, and partly because it just wasn’t prepared.

There are elections coming up in Portugal and Spain that may shift wider balances, and there is talk of a pan-European left political formation. The European project, though, remains on the critical list. Refugees are still drowning in the Mediterranean as they try to reach safety in Europe; borders are closing everywhere to keep them out. The neo-Nazi party, Golden Dawn, once again the third-largest in the Greek Parliament, increased its percentage of the vote on two islands where many land.

Still, the result of this melancholy election feels like a step forward, or at least beyond an impasse. Two fundamental decisions have been made: Greece wants to stay in Europe, and the old political establishment is no longer welcome. Victory has its own momentum; stability should bring some investment and debt relief. The eurozone forced Syriza to change, but failed to destroy it. That may not be much of a victory, but it’s what “hope” looks like now.