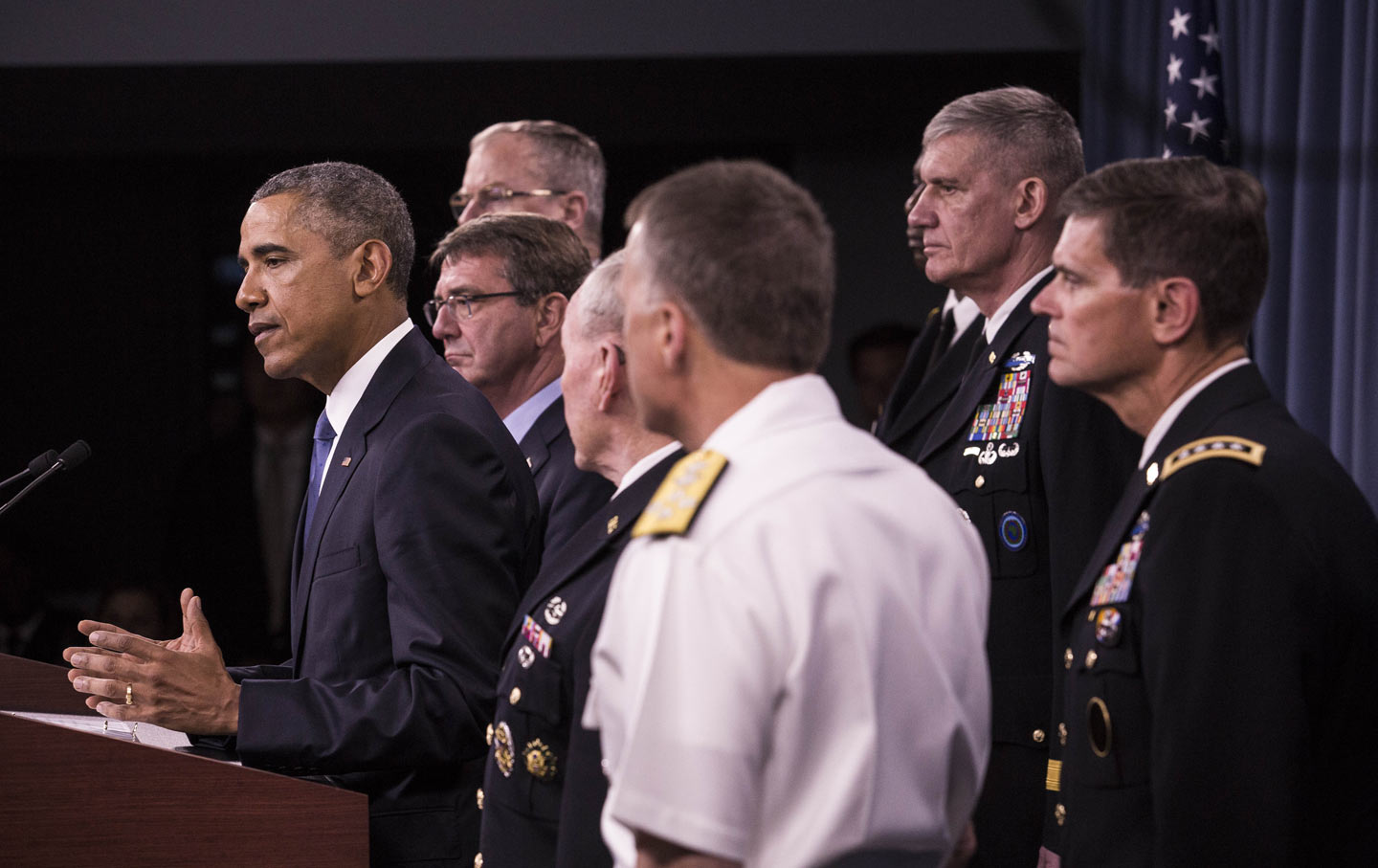 President Barack Obama delivers remarks at the Pentagon after meeting with members of his national security team concerning ISIS on July 6, 2015. (Rex Features via AP Images)

The terror attacks in Paris on November 13 have, at least for the moment, concentrated the minds of senior administration officials on how to address the myriad challenges posed by ISIS, which is perceived to be a growing threat to US national-security interests at home and abroad.

Testifying before the House Armed Services Committee on Tuesday, Secretary of Defense Ashton Carter flatly declared that “we’re at war” with ISIS. Carter, appearing alongside the Chairman of the Joint Chiefs of Staff, Gen. Joseph Dunford, told the committee that the administration plans to deploy special operations forces to hunt down ISIS leaders in Syria along with a “specialized expeditionary targeting force” in Iraq which will work to “conduct raids, free hostages, gather intelligence,” all the while bringing the fight to ISIS strongholds.

There are several problems with Carter’s formulation of the problem, as well as with his proposed solution.

If we are truly at war, as Carter claimed, then he and President Obama have some explaining to do since this new war is being waged in the absence of either UN or congressional authorization (the 2002 AUMF cannot reasonably be said to apply nearly 14 years after its initial passage against a group, ISIS, that didn’t then exist).

When pressed to defend his claim that we are at war, Carter hedged a bit, and allowed that, while perhaps it isn’t technically so, “it feels that way to our people.”

Yet these “feelings” have given rise to a solution which breaks President Obama’s pledge not to commit ground forces against ISIS. And as for Carter’s intention to use this new “expeditionary targeting force” to free hostages, we might reasonably ask if we are about to expend American lives on rescuing foreign nationals or members of the mythical moderate Syrian opposition, which is mainly composed of members of the radical Islamist groups Jabhat al-Nusra and Ahrar al-Sham.

Meanwhile, the administration and the Congress are tenaciously clinging to their demand that Assad leave the stage, because, in the words of California Democrat and ranking committee member Adam Smith, “Assad fuels ISIS.” If that is true then it would follow that if we remove Assad, ISIS will either (a) pack it in and call it a day; (b) renounce terror and join a ruling coalition with the “moderate” Syrian opposition; or (c) collapse once denied Assad as an enemy to rally against.

Knowing what we now know about ISIS, do any of these scenarios logically track?

As the hearing on Tuesday made clear, politicians and policymakers have once again fallen prey to the temptation to look “tough” in the face of Islamic extremism. Indeed, Carter justified the deployment of new ground forces by claiming that it “puts enemies on notice that they don’t know at night who might be coming in the window.” This is rhetoric lifted from a bad episode of Homeland or 24.

Yet one exception to this latest bout of Beltway chest-thumping has been Hawaii Democrat Tulsi Gabbard, who warned a seemingly incredulous Carter that our unilateral military actions in the skies over Syria risk the possibility of escalation between the United States and Russia, and may perhaps even touch off a “devastating nuclear war.” This is an important point, not least because of how little we know about the dynamics of conflict escalation.

Gabbard, an Iraq war veteran who holds the rank of major in the Hawaii Army National Guard, seems to understand that what often goes by the wayside in the rush to look “tough” is any willingness to consider whether US policy has contributed, tacitly or overtly, to the rise of ISIS.

And this brings us to one of the least remarked upon aspects of the Syrian crisis, that of the role played by the American government in fanning the flames of civil unrest which began in March 2011.

As early as April of that year the State Department was forced to admit that it had directed at least $12 million to government opposition groups, starting in 2006. As a violent standoff between the Assad regime and the opposition unfolded in Hama in July 2011, the US ambassador to Syria, Robert S. Ford, decided to travel there in a show of solidarity with the opposition.

At the time, the State Department said that Ford’s “fundamental intention was to make absolutely clear with his physical presence” that the United States stands “with those Syrians who are expressing their right to speak for change.” Predictably, Ford’s trip outraged the Syrian government which claimed, presciently as it turns out, that the opposition was made up of “armed Salafi groups.”

And before long, it was revealed by Human Rights Watch that parts of the armed opposition, including the sainted Free Syrian Army, had been committing war crimes at the very same time the administration had begun to chant its incessant refrain, first unveiled in August 2011, that “Assad must go.”

And so, if there is a scandal of American foreign policy in recent years, it isn’t “Benghazi,” it is this: that the American mania for regime change has led to one humanitarian catastrophe after another, in Syria, in Libya, in Egypt, and in Ukraine.

And it is this aspect of US “strategy” that needs addressing, and soon. Because until we own up to the fact that our government’s mania for regime change sows the seeds of instability the world over, no amount of new “strategies” such as those proposed by Gen. Dunford and Ashton Carter on Tuesday will make any difference, and we will keep on making the same mistakes over and over and over again.