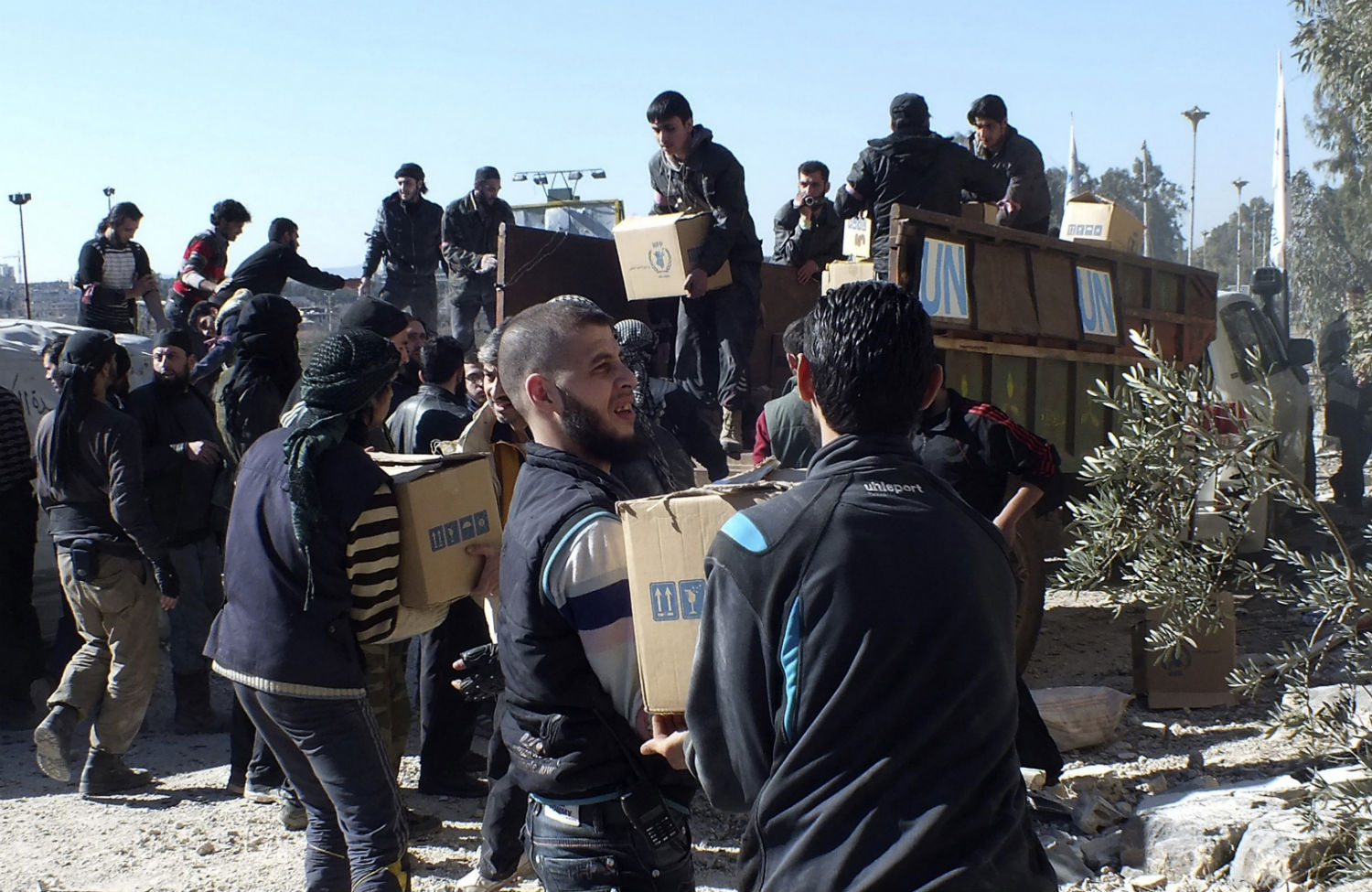 In his February 11 post “A Bad Idea: Using Military Force to Aid Syria’s Population,” Nation blogger Bob Dreyfuss inaccurately implies that in our February 10 New York Times op-ed on Syria, Nader Hashemi and I advocated US military intervention. Dreyfuss writes: “Both the local cease-fire hopes and the chemical arms transfers might be upset or destroyed if the United States barged into Syria with guns to deliver aid.”

But in fact we called for no such thing. Read the piece. Nowhere in it did we call for US intervention. What we called for is a United Nations Security Council resolution authorizing the use of force for the specific and very limited purpose of getting food and medicine to starving Syrian civilians trapped in the country’s besieged areas.

We noted that Russia vetoed three UN Security Council resolutions on Syria—resolutions that did not call for the use of force—and has said it would support measures on humanitarian issues only if Assad agrees to them. (The Security Council’s unanimous approval over the weekend of a resolution on humanitarian access is of course a most welcome development, one I’ll return to shortly.)

Dreyfuss raises no objections at all to Moscow’s pattern of obstructionism on the humanitarian front. If Assad insists on maintaining the kneel or starve sieges that threaten to kill hundreds of thousands of Syrian civilians—which the UN High Commissioner for Human Rights (OHCHR) has called a war crime—Russia has his back, and Dreyfuss is all right with that.

Because Moscow has blocked multiple humanitarian measures on Syria, Hashemi and I proposed that an ensemble of countries invoke the Responsibility to Protect principle in the (likely) event of yet another Russian veto. Nowhere in the piece did we call for the United States to intervene. We call for a multinational force. We mentioned signs of French interest in this course of action. The only other countries that seemed to be thinking along these lines were Australia, Jordan and Luxembourg. Yet Dreyfuss implies that we argued for the United States to “barge” into Syria.

This isn’t just sloppy—though it certainly is that. It reflects a myopic, US-centric tunnel vision in which everything comes back to the United States. This monochrome “anti-imperialism” is in fact an inverted form of imperialism.

It’s striking how worked up Dreyfuss gets about the American role in the Syrian conflict, given that the United States has done next to nothing about Syria over the three years since the uprising began. Dreyfuss actually takes John Kerry to task for “demonizing Assad.” Seriously? Demonizing Assad? Three years of reports from Human Rights Watch, Amnesty International and the UN’s Independent International Commission of Inquiry on Syria provide a detailed record of Assad’s war crimes, mass atrocities and crimes against humanity—yet Dreyfuss complains that the mass murderer is being “demonized”?

In telling contrast, Russia has played and continues to play a very direct role in the Syrian conflict, as Assad’s senior partner in crime and number-one ally on the world stage—a relationship Dreyfuss views quite favorably: “Not without reason, Moscow says that its military aid to Syria is legal, on a state-to-state basis, while American, Saudi and other military support to the rebels is illegal.”

Well, that’s one way of looking at it. Here’s a slightly different one, from the political scientist Wendy Pearlman (author of Violence, Nonviolence, and the Palestinian National Movement and Occupied Voices: Stories of Everyday Life from the Second Intifada):

Russia boosted military aid to Syrian President Bashar al-Assad in the weeks leading up to Geneva and Assad bombarded civilians with explosive barrels and banned cluster munitions even as his deputies sat at the negotiating table. In recent weeks, these and other assaults have killed scores and forced as many as 500,000 to flee their homes. At the same time, the regime’s starvation and siege of entire communities, systematic torture of political prisoners, and other crimes against humanity continue unabated.

But from Dreyfuss’ perspective, Russia’s stance on Syria is perfectly reasonable.

This affinity for Russia’s geostrategic point of view is a consistent theme in Dreyfuss’ blogging, not only on Syria but in general. It is a cold-blooded logic that serves to soft-peddle Moscow’s complicity with Assad’s killing machine. There is nothing progressive whatsoever about defending Russia’s role in Syria, no matter how one packages it. It’s whitewashing, pure and simple. And it’s disgusting.

But here’s the bottom line. Dreyfuss calls the proposal Hashemi and I make to get food to the civilians trapped in Syria’s besieged areas a “really terrible idea.” What, then, does he propose be done about this crisis which, according to the United Nations World Food Programme, threatens the lives of at least 800,000 Syrian civilians? The only hint he gives us is here:

The Geneva talks…represent the only hope of stabilizing the crisis in Syria, and if it’s possible to arrange even local ceasefires for the delivery of humanitarian supplies, then lives will be saved.

But Hashemi and I explicitly addressed this in our piece. The two sides agreed in Geneva to a humanitarian ceasefire. The UN and the Red Crescent attempted to deliver food, water and medicine by truck to 3,000 civilians—their convoy came under mortar and gunfire attack as it was leaving the city of Homs. So as welcome as the humanitarian ceasefire was, it was violated—and this figures centrally in our argument:

The recent attacks on the convoys attempting to deliver humanitarian aid into the besieged city of Homs are a case in point: The lifting of the sieges can’t be left to the warring factions on the ground. An external, international force must be introduced to guarantee the safe passage of food and medicine to starving Syrian civilians.

Dreyfuss views this as a “really terrible idea”—fine. Then what’s his idea? To call for more talks and negotiations between the warring factions without addressing the fact that this process has utterly failed not only to produce a resolution to the conflict but even to bring relief on the humanitarian front—even just in one small area of Syria at that—is an exercise in evasion. Should hundreds of thousands of Syrian civilians be consigned to starvation because the warring factions can’t agree to end the sieges, or decide to violate the meager agreements that have been reached? Is that an equation Dreyfuss is okay with?

We are not okay with that equation. We argue that there are higher principles at stake. We do not believe that Assad has the sovereign right to starve civilians to death. Does Dreyfuss? If not, then what should be done—other than the same things that have failed to work thus far?

Dreyfuss might view the new Security Council resolution on humanitarian access as a breakthrough, and as vindication for his insistence on diplomacy over force. I enthusiastically applaud the resolution, not least because it demands an end to Assad’s barrel bombs and condemns the starvation sieges.

But the resolution is non-binding and as such will depend, once again, on the warring factions to abide by it. The fact that Russia voted for the resolution—a dramatic departure from its pattern of obstruction—provides hope that Moscow will nudge Assad to comply. But there’s no guarantee that this will happen. As Ken Roth of Human Rights Watch put it on Twitter:

“The true test will be how far the Syrian government and armed opposition groups will abide by the demands of the resolution,” said Jose Luis Diaz, Head of Amnesty International’s UN office in New York. The resolution, according to Reuters,

asks U.N. Secretary-General Ban Ki-moon to report to the council in 30 days on implementation and “expresses its intent to take further steps in the case of non-compliance.” Diplomats say Russia is unlikely to agree to any action if Syria’s government was found to be in non-compliance.

Question for Bob Dreyfuss: What then? What if regime forces once again shoot up a humanitarian convoy or otherwise block the delivery of aid, and Russia stands by its ally, blocking any “further steps”? What then would Dreyfuss suggest? Will he continue to defend Moscow’s stance and oppose any other measures? Will he remain supportive of Russia having the final say over whether starving civilians eat?