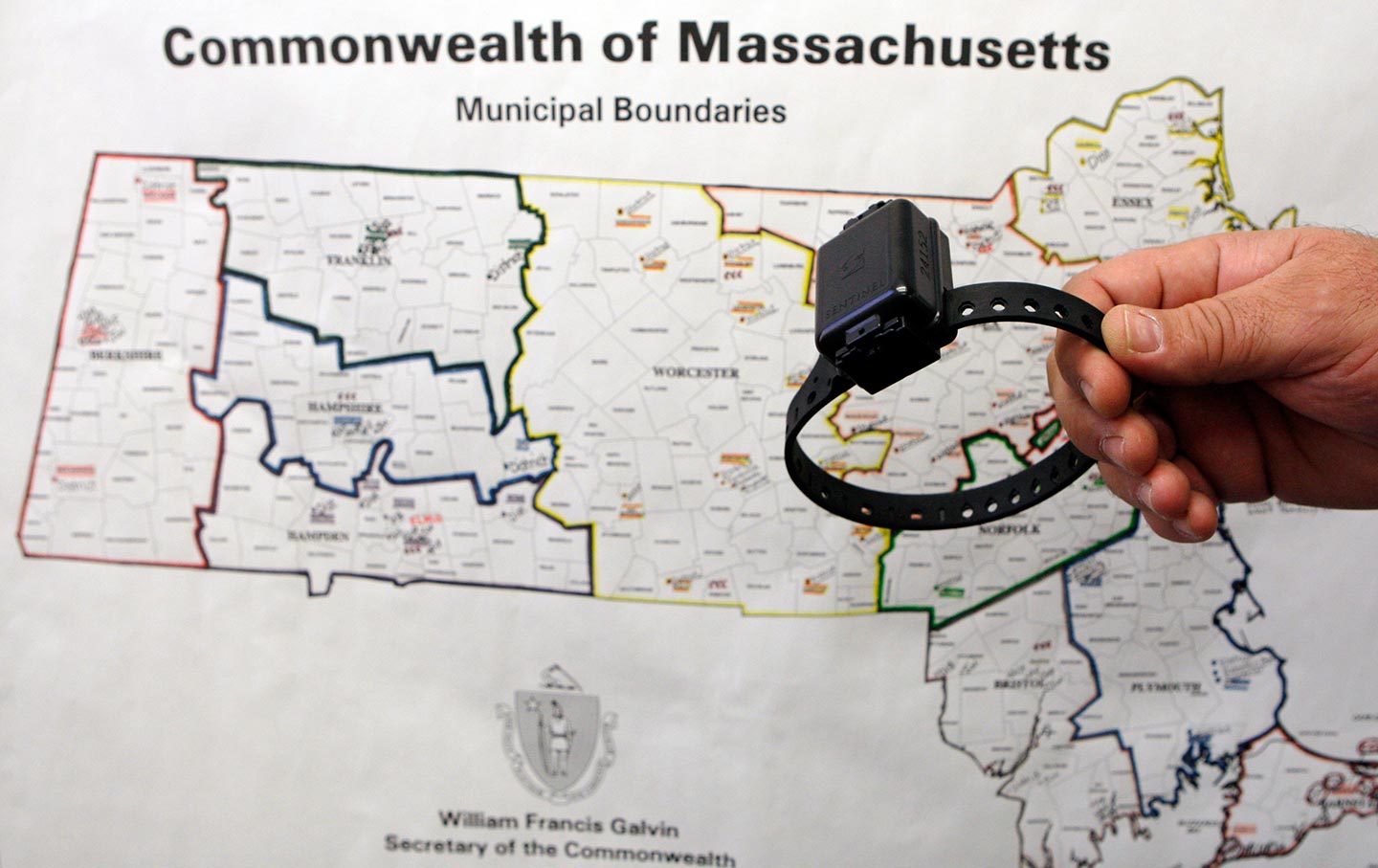 A GPS ankle transmitter, part of the Electronic Monitoring Program, which uses GPS bracelets to track the movements of parolees, is shown in Boston on May 5, 2008. (Reuters / Brian Snyder)

Electronic monitoring is popularly hailed as more liberating than jail. But as New York Times columnist Michelle Alexander writes, it is also a blatant manifestation of “the newest” Jim Crow, or the systemic oppression of African Americans through the criminal-justice system. Under e-carceration, limits on mobility “may make it difficult or impossible to get or keep a job, attend school, care for your kids or visit family members. You’re effectively sentenced to an open-air digital prison, one that may not extend beyond your house, your block or your neighborhood,” she writes. That concern is immeasurably amplified when the technology is designed to do more than mere geolocation. In 2014, Prison Legal News reported on GPS ankle monitors that were equipped with cell-phone features that let police, prosecutors, or prison supervisors monitor the conversations of pretrial defendants and parolees without their knowledge or consent. When a defense attorney noticed authorities could talk to his client through an ankle bracelet, he filed a complaint, noting that SecureAlert, the company that manufactures the device, could unilaterally activate the microphones without notice. His client’s device was temporarily removed for the duration of the trial, but it remains unclear how many of the approximately 125,000 devices worn by those on supervised release in the United States are also equipped with eavesdropping capabilities.

Now it turns out that the ankle bracelets worn by juvenile offenders and pretrial defendants in Chicago have been equipped with microphones that permit social services, probation officers, and other government agencies to make unscheduled calls and send push notifications concerning their wearers’ whereabouts. Most alarmingly, the devices allow authorities to listen in on conversations, including interactions with parents, teachers, psychologists, or peers in the bedroom, in the bathroom, or during consultation in an attorney’s office. The monitors confound the obligation of confidentiality with lawyers, therapists, and other fiduciaries. They turn the constitutional right against self-incrimination on its head. Wiretapping children helps the state monitor their entire social world, exposing intimate personal lives far beyond the criminal-justice system’s jurisdiction.

These days, many of us imprison ourselves with analogous technology by choice—the smart watches we wear on our wrists, the GPS tracking on our cell phones or car-location apps, the mellifluous reassurances of Siri. These aren’t perceived as disciplinary tools; instead, they are marketed as ways to connect. Take the ads on Amazon for wearable child trackers that promise constant oversight of one’s progeny: all smiles and pastel colors, not a hint of dystopia. And while this sort of thing could well be handy for lost dogs, Alzheimer’s patients, or those with cognitive disabilities, perpetual radio contact also introduces a control-freaky, dependency-inducing moral tether into parent-child relations.

Verizon’s GizmoWatch, a tracker with an LTE smart watch built around it, is a good example. According to one breathless review on the website Wareable, the “smartwatch stuff” does double duty by priming youngsters for long-term patterns of consumption, in that it “is actually aimed at getting kids used to the idea of wearing a smartwatch.” Plus, there’s a Mickey Mouse edition, a built-in step counter, inactivity reminders, and “a hopscotch tracker and a voice changing mode to make things a little more fun.” More to the point, the GizmoWatch has two-way calling and messaging and can be programmed with up to 10 contacts approved by parents, with location tracking and GPS fences that parents can delimit.

Similarly, a platform called Canvas Parent advertises itself as empowering parents “to take a greater role in overseeing their children’s academic work.” The app maker pitches it as “a convenient communication channel for schools and parents,” promising to let parents “view assignment descriptions, assignment grades, course grades and course announcements, as well as set reminders for assignments and alerts for specific grade activity.”

While advertised as enhancing transparency, the app burdens children by perpetually measuring their performance, complete with multiple daily push notifications of what must be done and done now. It’s sold in the name of educating children, but in practice, it teaches parents not just how to participate but also to intrude by providing little space for kids to learn anything for or by themselves.

Someplace between digital prisons and digital playpens are the apps, cameras, and microphones that govern us all. Insurers ask how much you exercise, employers monitor how long you take for lunch, and Amazon even patented wristbands that could tell if workers “were about to place items in the wrong bins.” Some of these systems require employees to download trackers onto their personal phones. The social cost of 24/7 surveillance, then, is not merely the mechanization of our duties at work; it makes us uncreative robots in the process, forming us into obedient soldiers.

Scholars Woodrow Hartzog and Evan Selinger recently underscored the simple human importance of obscurity—that is, being able to move relatively unnoticed in the world, even through public spaces. Despite the too-easy bromide of “I have nothing to hide,” our mental and constitutional health requires a degree of protected thought-space in order for us to become self-reflective, responsible, and aware. A precious species of whimsy and personal satisfaction flourishes only when we are not constantly under a spotlight. The shelter of obscurity, Hartzog and Selinger remind us, operates as a “barrier that can shield you from government, corporate and social snoops.” Without that most basic allowance of autonomy, we will have capitulated to a civic practice of nothing less than totalitarianism.