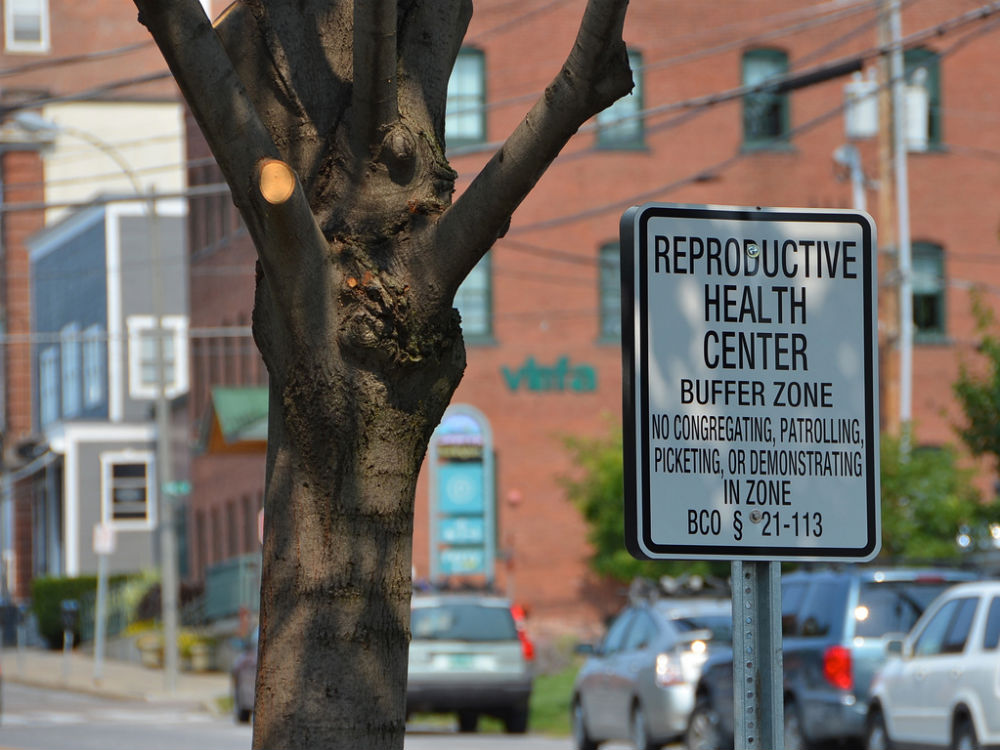 A sign delineates the buffer zone outside of a Planned Parenthood in Burlington, Vermont. (afagen/Flickr)

These zones have been credited with creating a safe, clear path for those who, for a variety of reasons, enter clinics that provide abortions. As one first-person account explained:

These protesters don’t get the fact that most people are walking in for birth control and pap tests. How would they feel if I stood outside their doctors’ office, assumed I knew the reason for their visit, and screamed at them in front of crowds of people?

Of course, those celebrating today’s ruling argue that they wouldn’t need to scream if those pesky buffer zones weren’t in place. They could instead approach patients with ease and offer their judgments, literature and whatever else they’re carrying. The Court ruled today that anti-choice advocates should be allowed to do just that, given that speech can’t be regulated on public sidewalks. The problem is that what some characterize as simply offering a different perspective and options, others see as clearly aggressive and violent, as made clear by the #NotCounseling hashtag now gaining steam on Twitter.

Clinic bullies waiting outside clinic AFTER procedures just to taunt—“Remember June 26 2014 is the day you killed your baby.” #notcounseling

MT @LouClinicEscort Anti boxed in client between him & a car in CPC lot. Blocked her until she took his lit #notcounseling #protectthezone

Late last year, a number of abortion rights advocates signed onto an amicus brief that makes the case why a decision such as what was handed down today would be a serious blow to women. Here’s a round up of some advocates’ responses today:

Cecile Richards, president of Planned Parenthood Federation of America: “This decision shows a troubling level of disregard for American women, who should be able to make carefully considered, private medical decisions without running a gauntlet of harassing and threatening protesters. We are taking a close look at this ruling, as well as patient protection laws around the country, to ensure that women can continue to make their own health care decisions without fear of harassment or intimidation.”

Jessica González-Rojas, Executive Director of the National Latina Institute for Reproductive Health: “For too long, demonstrators outside women’s health clinics have harassed, threatened, and violated the privacy of women seeking needed services. As someone who has been assaulted by anti-choice protesters when entering a clinic for reproductive health care in the early ’90s, I know personally how critical buffer zones are for the safety and security of patients…. Buffer zone laws, like the one in Massachusetts, create a safe space, which allows reproductive healthcare facilities to meet the needs of patients, including contraception, cervical cancer screenings and abortion care. These facilities are often the only places where low-income women can access these critical services.”

Shivana Jorawar, Reproductive Justice Program Director, National Asian Pacific American Women’s Forum: “We know there are a multitude of barriers to women’s access to health, and protesters harassing—bullying—women is a one of them. This decision worries me for my own community, as Asian-American women already face great cultural stigma and shame around abortion and have some of the highest rates of mental health issues and suicide—we don’t need to be yelled at on the way to the clinic.”

States and cities across the country, including San Francisco and New Hampshire, have recently passed laws instituting buffer zones, while others have waited to move forward based on the outcome of the Supreme Court case.