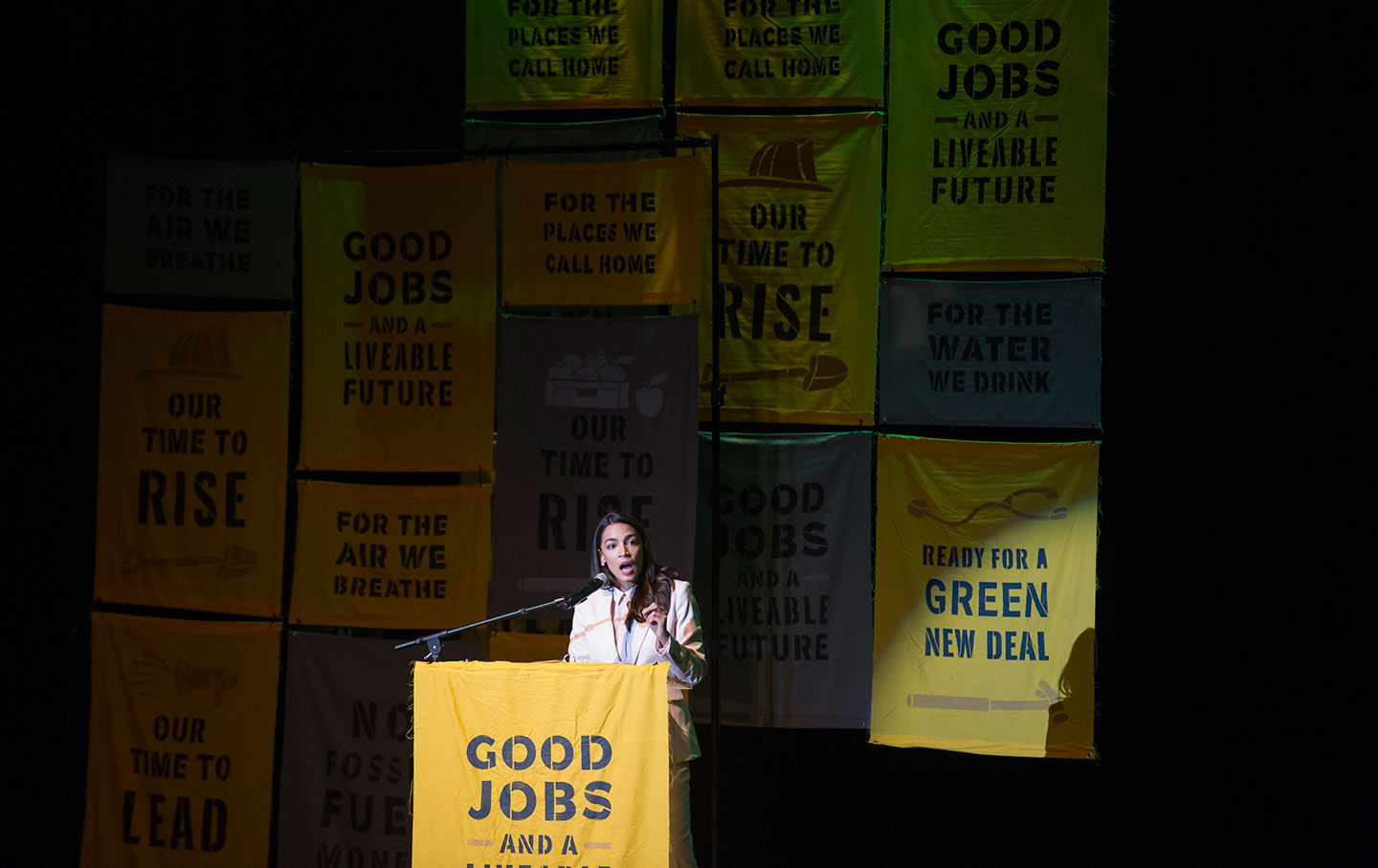 Representative Alexandria Ocasio-Cortez speaks at the final event for the Road to the Green New Deal Tour at Howard University on May 13, 2019. ( AP Photo / Cliff Owen )

In early May, a scientific-research station at the top of a volcano in Hawaii recorded a grim milestone. Thanks to fossil-fuel combustion, the concentration of carbon dioxide in the atmosphere has reached 415 parts per million. Humans have never experienced a climate like this: The last time Earth’s atmosphere held so much carbon dioxide was about 3 million years ago, during the Pliocene epoch, when tusked mastodons roamed North America. Sea levels then were 50 feet higher—or more—and leafy bushes similar to stunted beech trees grew in Antarctica. While unprecedented, this state of affairs was not unexpected. In 1982, scientists working for Exxon modeled the projected rise in carbon-dioxide concentrations and corresponding temperature increase; the “most probable” path shows CO2 passing the 415 ppm mark right around 2019, with global temperatures rising by 0.9 degrees Celsius, a threshold crossed in 2017. Thanks to industry cover-ups and political inertia, climate change is proceeding perfectly, horribly on time.

This news added an extra twinge of urgency to a town-hall convened Monday in DC by the Sunrise Movement, a group of young activists trying to reshape the contours of climate politics in the US. The event, which featured Representative Alexandria Ocasio-Cortez and Senators Bernie Sanders and Ed Markey, marked a happier milestone for Sunrise. Six months ago, shortly after the midterm elections, 200 activists packed into the office of House Speaker Nancy Pelosi to demand the formation of a committee to draft a Green New Deal. They didn’t get the committee—instead, Pelosi resuscitated a more general select committee on climate—but they did get Democrats’ attention. “We probably talked more about the climate crisis in the first two months of 2019 than we did in the entirety of the last two presidential elections combined,” Sunrise’s executive director, Varshini Prakash, proclaimed on Monday. It’s a hard claim to fact-check, but it’s undeniable that the importance of climate change in national politics has ballooned. A CNN poll released in April identified climate change as the top issue of concern for Democrats and Democrat-leaning independents, with 82 percent saying it is “very important” that a Democratic presidential candidate supports aggressive action.

Over the past month activists with the Sunrise Movement have promoted the Green New Deal at more than 200 town halls across the country, from burned-out Paradise, California, to Detroit to Kentucky coal country. Monday’s event marked the start of a new phase, one more squarely focused on the 2020 elections. Prakash outlined three demands for presidential candidates: that they refuse donations from fossil-fuel interests, that they pledge to make the Green New Deal a “day one” priority if elected, and that they support calls for a primary debate focused squarely on climate change. To push for these three asks, Sunrise is planning a massive demonstration to coincide with the second Democratic debate on July 30 in Detroit. 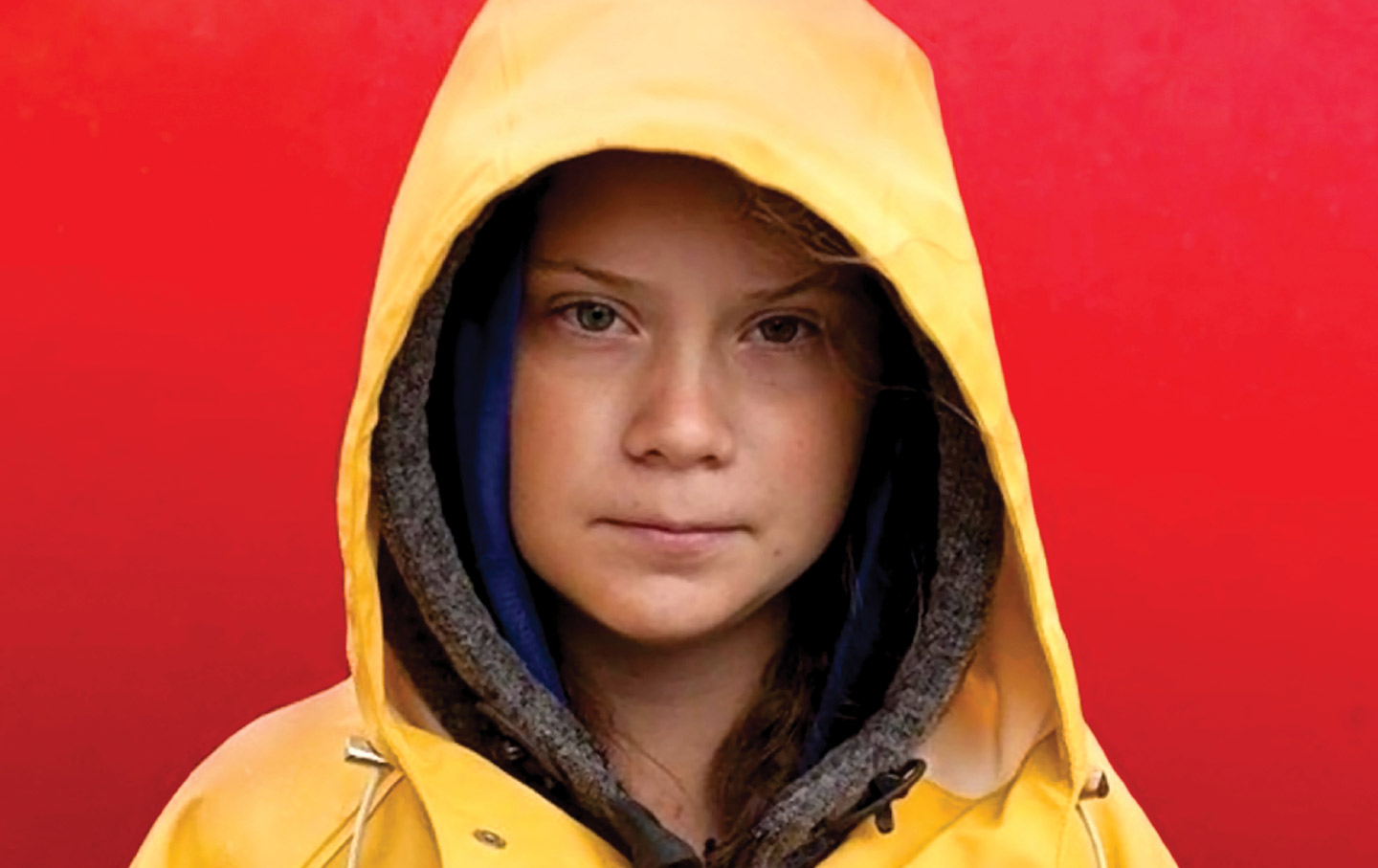 Most primary candidates have already at least loosely endorsed the idea of a Green New Deal. That vague consensus will likely give way in the coming months to fissures over more specific issues, such as fossil-fuel extraction on public lands and the role of natural gas, which is why a number of environmental groups want a climate-focused debate. (So far only Beto O’Rourke and Jay Inslee have released broad climate plans; Elizabeth Warren has released proposals specific to public lands and the military.) The great unknown is Joe Biden, who, an adviser told Reuters, is searching for a “middle ground” on climate policy. (That probably means heavy on natural gas.) A number of speakers at the Sunrise event jabbed at the comment, though few called out Biden by name. Referencing critiques that the Green New Deal is “too much,” Ocasio-Cortez responded: “What’s ‘too much’ for me is the fact that, in 1989, the year that I was born… the year that many of us were born, and in years after and right before, that politicians were first informed by NASA…that climate change was going to threaten my life and everyone here’s life to come, and they did nothing. That is too much for me,” she said. “And I will be damned if the same politicians who refused to act then are going to try to come back today and say we need a middle-of-the-road approach to save our lives.”

Organizing around the presidential primary is just a small piece of the work ahead. After all, the road to a Green New Deal—or any other comprehensive climate-change legislation—runs through Congress (and the Senate filibuster), not just the White House. During a panel discussion at Monday’s event, Alexandra Rojas, the executive director of Justice Democrats, the group that recruited Ocasio-Cortez, spoke about the importance of mounting primary challenges down the ballot. “We need to be able to get involved in the political process, specifically around primaries, to choose the Democrats that we want to ultimately champion things like the Green New Deal,” Rojas said. “The only way we’re going to get champions is if we engage in competitive primaries. Otherwise we’re going to get Democrats who talk about the party of ‘no we can’t.’”

Like the young activists who led the gun-safety demonstration March for Our Lives, Sunrise’s members frame the climate crisis in intensely personal terms. Prakash talked about devastation wrought last year by monsoons in south India, where her family is from, and of the threat to her current home in East Boston, “a place where, if we don’t take action in the next couple of decades, will cease to exist and will be lost to the seas forever.” So much of what’s happening to the planet can be described in terms of loss, recent and impending, and given the current state of politics, it’s impossible to talk honestly about climate change without some pessimism. “I wish that, as a public servant, I could come here and tell you that everything’s going to be all right. But I can’t tell you that today, because I’m not interested in lying to you. Frankly, there is no reason for us to be comfortable right now. We are at four-fifteen. Four-fifteen,” Ocasio-Cortez said, referencing the recent CO2 concentration measurement.

Still, an honest reckoning with the full extent of the crisis is the only way to arrive at a response on the same scale. That’s important practically, but also politically. As Ocasio-Cortez said at the close of the evening: “People will vote if there is something worth voting for.”