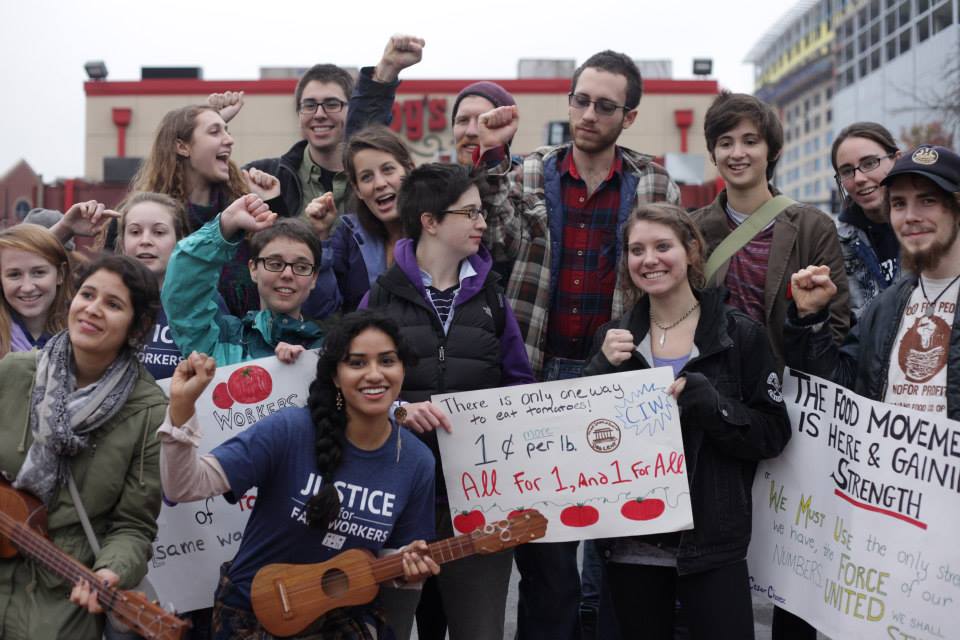 Dozens of DC Students took to the streets on November 16 to protest the poor working conditions of Wendy's farmworkers. (DC Fair Food/Beth Geglia)

The tomato pickers of the farms in Florida have raised the torch of accountability for over a decade now, successfully challenging behemoth food conglomerates in a self-determining struggle for their own welfare.

Where there were once rampant human rights abuses, economic exploitation and a culture of fear peddled by infectious ignorance, there is now the legally binding Fair Food Program, “an initiative consisting of a wage increase supported by…corporate purchasers of Florida tomatoes, and a human-rights-based Code of Conduct.” Designed by the Coalition of Immokalee Workers—a vanguard group representing the voices of Florida’s tomato pickers—the FFP establishes ongoing audits by an independent council to ensure that the farms supplying tomatoes to the FFP’s corporate signees are upholding these labor standards.

So far, every fast-food corporation that sources its tomatoes from Florida’s farms has signed onto the plan except for Wendy’s.

The international purveyor of square beef patties has steadfastly refused to sign the FFP, a lone maverick among its industry peers like Burger King and Taco Bell. When confronted with letters, phone calls and public rallies over the last two years from farm worker unions, students and activists demanding the company justify its refusal, Wendy’s executives have insisted the company already purchases tomatoes from suppliers operating under the FFP. Advocates argue that such assurances are basically meaningless without any legal mechanism to corroborate the claims, and are demanding a real, written commitment.

To this end, students, farmworkers and food justice activists all over the country poured into the streets the week of November 15—the date Wendy’s founder Dave Thomas launched the franchise—to demand the franchise’s owners sign the FFP. Leading organization efforts has been the Student Farmworker Alliance, which has allied itself with the cause of the Florida farm workers and is using student engagement to force Wendy’s to joining the FFP.

“This is the biggest action we’ve done so far,” says Sarah Vázquez, who serves on the national committee of the Student Farmworker Alliance. “[The action] provides a fine pressure point to engage student populations and engage with Wendy’s on campus, leveraging our power and voices.”

On November 16 in eighteen cities from New York to Miami to the Bay Area, high school and college students joined community activists and farmworkers in demanding Wendy’s agree to the accountability measures outlined in the FFP. In Columbus, Ohio, near the company’s headquarters, more than 200 people gathered by Ohio State University before marching to a Wendy’s restaurant about a mile and a half away.

“Students and residents in Wendy’s home town will not stop until Wendy’s makes a verifiable commitment to the Fair Food Program and does its part to end farm worker exploitation in its supply chain,” said Cruz Bonlarron Martinez of the Student-Farmworker Alliance, as reported in the Examiner.

More than 130 student activists converged on Washington, DC, from a number of regional universities, including American, Georgetown, Brown and the University of Pennsylvania. The group rallied loudly in front of the White House before marching to a nearby Wendy’s restaurant where a delegation of four students handed the manager a letter outlining the protesters’ demands.

Patricia Cipollitti of the Georgetown Solidarity Committee worked in the weeks before the march to bring together students from various socially minded campus organizations. “It’s up to us as student allies to continue to push Wendy’s until it can no longer deny farmworkers the just and dignified working conditions they deserve,” she said, adding, “we can start reverting that trend and building a more dignified and more sustainable food system that pays its farmworkers a living wage.”

At the University of Pennsylvania, the Penn Student Labor Student Action Project (SLAP) has been working with Philly Fair Foods, the wider coalition of Philadelphia residents engaged in food justice issues, to carry out a week of action leading up to the November 16 protests.

“Penn SLAP will not stop demonstrating and organizing actions until Wendy’s does the right thing and signs on to the Fair Food Program,” said Daniel Cooper, a spokesperson for SLAP. “We are equally committed to [removing Wendy’s] from our universities unless Wendy’s becomes the fifth of the top five fast food restaurants to sign the Fair Food Program.

The action taken by students across the nation mirrors that of their counterparts a decade ago, when students at 300 universities and fifty high schools “organiz[ed] educational events and direct actions, participat[ed] in cross-country tours” to force Taco Bell’s hand in signing the newly drafted Fair Food Program. At the time, youth activists went as far as running off Taco Bell franchises from twenty-five campuses during a four-year boycott before the chain finally capitulated in 2005 and became the first corporate participant in the FFP. Ironically, the man who served as Taco Bell’s president at the time—Emil Brolick—is now the current president and CEO of Wendy’s.

Then as now, students are demonstrating that they stand in solidarity with the farmworkers of Florida. Wendy’s ability to shirk accountability largely rests on the cynical hope that consumers will remain indifferent and ignorant toward its human factors of production. They are mistaken; students are engaged and informed, and if history serves as an example, they will only grow more confrontational until Wendy’s formally joins the Fair Food Program.