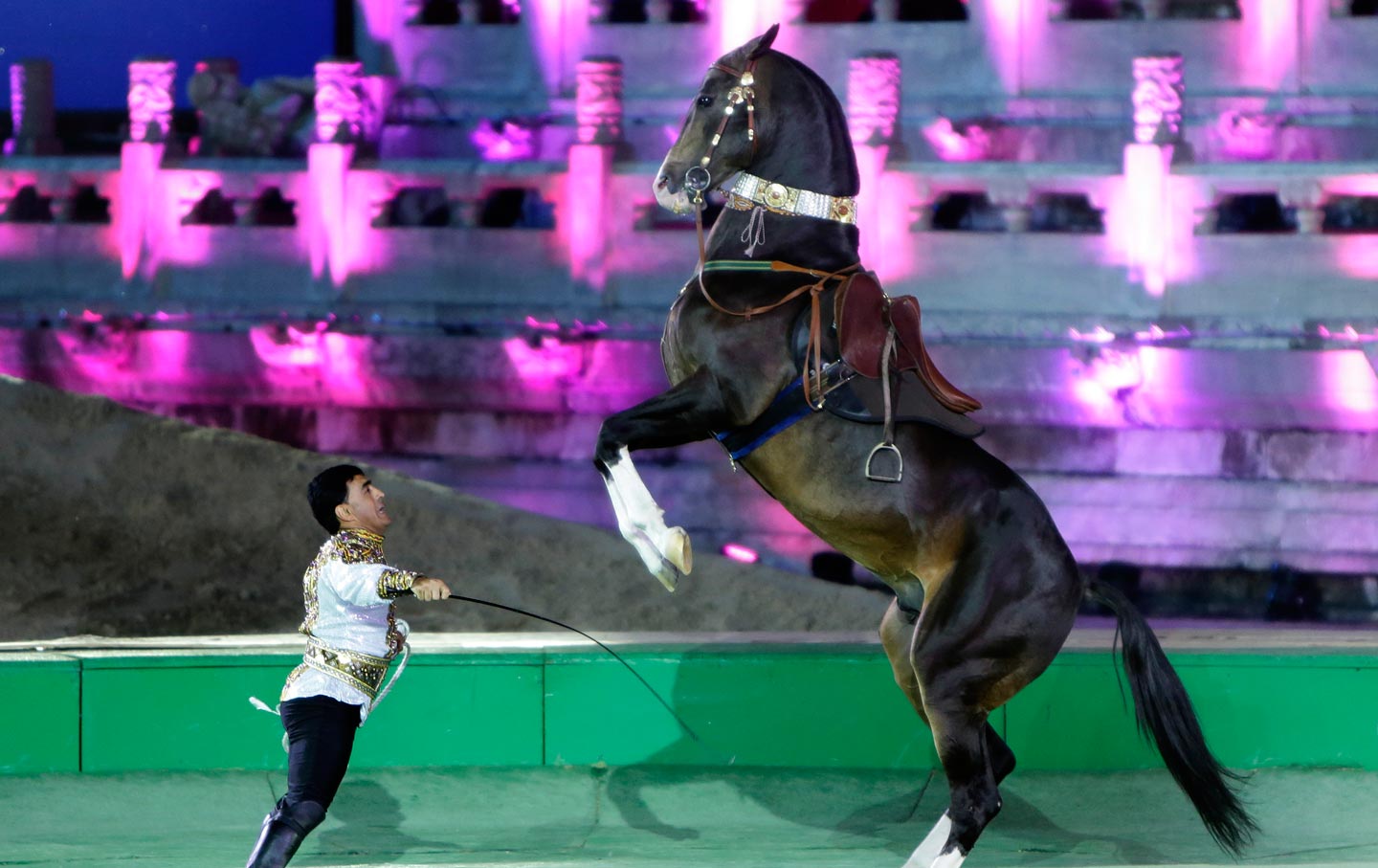 A Turkmenistan man performs with an Akhal-Teke Horse at a festival in China, May 12, 2014. (AP / Jason Lee)

Every April the Turkmen Horse Festival, set up at the behest of Turkmenistan’s president, Gurbanguly Berdimuhamedow, celebrates the Akhal-Teke, a horse with a long back, small head, upright neck, and sparse mane. This animal is a source of national pride and enjoys a worldwide reputation for speed and exceptional endurance; it can cover up to 1,000 kilometers in under a week. Local and foreign horse aficionados meet at the festival for equine-beauty contests and races, and the country, best known for its ultra-authoritarian regime, opens up for a few days.

Translated by George Miller. This essay continues our exclusive collaboration with Le Monde Diplomatique, monthly publishing jointly commissioned and shared articles, both in print and online. To subscribe to LMD, go to mondediplo.com/subscribe.

Like many of his countrymen, Turkmenistan’s president worships this horse; he competed in a race at the track in the capital Ashgabat in April 2013, and won (though his horse collapsed just after crossing the finishing line). Equine historian Jean-Louis Gouraud writes of the Akhal-Teke that “when it moves, with long, skimming strides on the quivering springs of its fine limbs, it exudes an air of vigorous grace, a strange but harmonious blend of strength and fragility, virility and femininity.”

It is possibly the oldest horse breed in the world, going back around two and a half millennia; there are claims that the analysis of remains in Scythian tombs proves the bloodline has remained remarkably pure. Turkmenistan’s official history claims Bucephalus, Alexander the Great’s charger, was an Akhal-Teke, and English thoroughbreds are partly descended from the same lineage. The name comes from the Teke horsemen, the most powerful of the Turkmen tribes, feared raiders who lived in the Akhal valley, near Ashgabat.

The Akhal-Teke is a symbol of Turkmen unity and identity, and appears in the center of the national emblem, surrounded by five traditional rugs representing the main tribes. Pierre Lebovics, France’s ambassador to Turkmenistan from 2010 to 2014, said: “When they were freed from Soviet control, less than 30 years ago, the new nation states of Central Asia emphasized unifying symbols of federation. President Berdimuhamedow is using the Akhal-Teke to enhance his country’s status.” A golden equestrian statue of the president in central Ashgabat, looking down on his people from a 20-meter marble plinth, underlines how intertwined the cults of horse and president are.

Berdimuhamedow has published several books praising the Akhal-Teke since he came to power in 2007. Christian Lechervy, French ambassador from 2006 to 2009, said: “Celebration of the Akhal-Teke was already part of state propaganda under his predecessor Saparmurat Niyazov. He’s taken this further, emphasizing the horse as a means of developing a sports economy.”

This September, Ashgabat hosted the fifth Asian Indoor and Martial Arts Games, the first major international sporting event held in Turkmenistan. More than 5,000 athletes competed in 21 disciplines. According to games-committee president Dayanch Gulgeldiyev, the horse on top of the stadium is an Akhal-Teke, and, for the first time in the games’ history, horsemanship took pride of place. “Berdimuhamedow got the Asian Olympic Committee to agree to add equestrian sports to the program,” explained Héloïse Ghirardi of the International Association of Akhal-Teke Breeders.

Berdimuhamedow had already ordered a complete overhaul of Turkmenistan’s equestrian infrastructure. Between 2010 and 2011, five major new racetracks were built, so each province now has its own high-quality track. He has pressed on with his plan to create an Akhal-Teke racing industry, hoping to launch a major international prize.

Hervé Barjot, a French breeder based in Ireland, offered to help Berdimuhamedow in 2012 and began regular direct contact with the president, who is secretive and inaccessible. He gave Barjot access to his stable, and Barjot invited him to Paris: “I made the invitation three weeks before the Prix de l’Arc de Triomphe. My chances of success seemed nil, but in the end the president agreed to come on condition that a Turkmen jockey could take part in the race.” The president appeared at Longchamp with a 40-strong delegation in traditional sheepskin hats.

The gift of Gend Jim

An Akhal-Teke played a key role in 1994 when the French construction company Bouygues began a lucrative collaboration with President Niyazov. President François Mitterrand received a splendid Turkmen stallion, Gend Jim, on an official visit to the country in 1994; the horse was secretly entrusted to Alexandre Gros of the French Riding Federation rather than the (national) horse-breeding organization, and later transferred to a presidential residence at Souzy-la-Briche, south of Paris. Mitterrand, it was later revealed, gave Gend Jim to his horse-loving undeclared daughter Mazarine Pingeot. It is thanks to Gouraud’s persistence that the existence of Gend Jim, and consequently of Mitterrand’s undeclared daughter, became public knowledge in November 1994.

The Akhal-Teke had been an almost forgotten breed, but now became a favorite among horse lovers and highly sought after by the richest. “Morocco’s King Hassan II saw a photo of Gend Jim in a magazine while in Paris, and immediately told Mitterrand that he wanted one too,” said Gros. (As a result, Ajdar was brought from the Caucasus at the French taxpayer’s expense.)

The Akhal-Teke had long been a premium gift and facilitated major diplomatic rapprochements. A Persian diplomatic mission gave the first Romanov tsar, Mikhail I, several of the horses, and in 1956 Nikita Khrushchev gave one to Queen Elizabeth II. However, “Khrushchev sent many Akhal-Tekes to the butchers,” according to Geldy Kyarizov, head of Turkmen Atlary (a state body responsible for horses) and a minister from 1997 to 2002. Kyarizov told me in Prague (where he has lived in exile since 2016) that after Russia conquered Turkmenistan in 1881, the Akhal-Teke population plummeted from perhaps as many as 100,000 to near-extinction: just 2,100 thoroughbreds remained by 1980. The Basmachi, the Muslim peoples of Central Asia who fiercely resisted Russian domination until the early 1930s, rode Akhal-Tekes. “For czarist and then Soviet power, the destruction of such a strong military symbol as the Akhal-Teke was a way to subjugate the Turkmen people,” Kyarizov explained.

Kyarizov himself rode an Akhal-Teke from Ashgabat to Moscow—a distance of over 4,000 kilometers—in two months in 1988, 24 days less than the previous record, set in 1935. Both times the aim was to alert the Soviet authorities to the breed’s decline and demonstrate its exceptional endurance.

After independence in 1991, Turkmenistan elevated its horses to the status of martyrs to colonization. The Russo-Soviet authorities were blamed for almost exterminating the breed, though, according to Russian horse expert Natalia Gourevitch, “the mechanisation of agriculture in the last century largely explains the decline in numbers, as with other breeds around the world.”

A small group of Soviet experts, aware of the risk of extinction, created a register in 1932. This genealogical record catalogs horses that are “pure” Akhal-Teke (over 75 percent) and their descendants, and provides insight into the breed’s development. As it was kept by an association that reported to the Ministry of Agriculture in Moscow, it did not pass to the Turkmen government after independence. Berdimuhamedow saw this refusal to surrender control as a colonial legacy.

In August 2010, he set up the International Association of Akhal-Teke Breeders, which he heads, as the first step towards reestablishing Turkmen control over the breed. Jean de Bannes, president of Akhal-Teke France from 2008 to 2015 and a founding member of the World Akhal-Teke Organisation, said: “His plan was to reclaim the general register.” But Russia refused. The institute that controlled the genealogical information produced an agreement from the end of the Soviet Union specifying that breed registers had to remain in Russia. As Turkmenistan could not gain oversight of the world population of Akhal-Tekes, it has instead tracked its national stock, forbidding their export except as diplomatic gifts.

But the Turkmen authorities’ standards of professional training and health checks are inadequate. Leonid Babaev, a big Russian breeder who owns around 60 of the horses, said the Turkmen government had not exercised any serious control over the Akhal-Teke population for 15 years. In 2002, Niyazov had his horse minister Kyarizov imprisoned for five years for horse theft and removed his 108 Akhal-Tekes to the presidential stud farm. Kyarizov’s offense may have been to breed and own animals that were too attractive, since Turkmen breeders must present their best horses to the head of state. Berdimuhamedow now owns over 600 Akhal-Tekes, almost 10 percent of the world total.