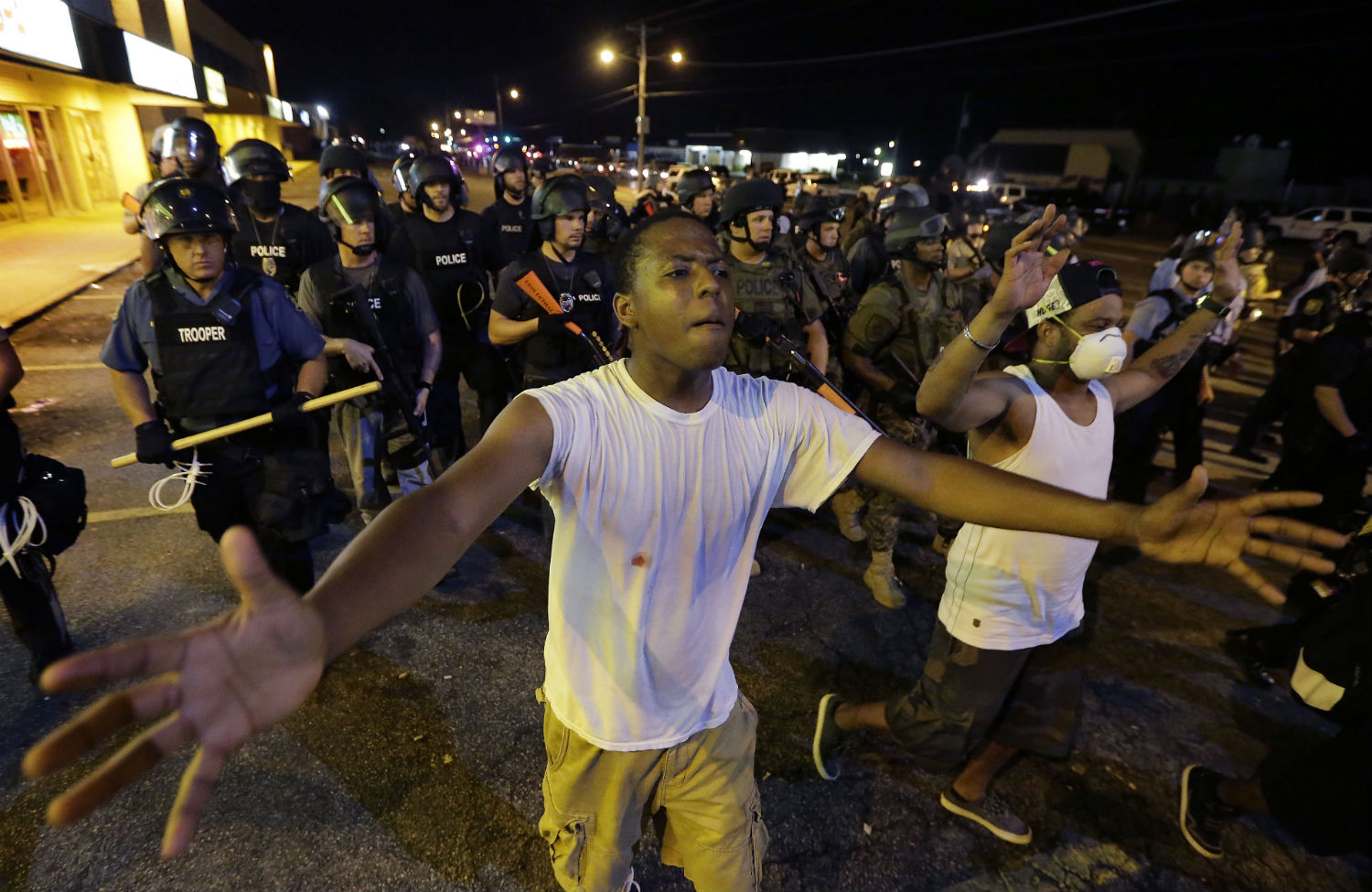 People are moved by a line of police as authorities disperse a protest in Ferguson, Missouri, early Wednesday, August 20, 2014. (AP Photo/Charlie Riedel)

The people of Ferguson, Missouri, have rallied and marched and protested for eleven straight days and nights. They want justice for Michael Brown, the 18-year-old unarmed black boy killed by Ferguson police officer Darren Wilson on August 9. They’ve been met with tear gas, assault rifles, rubber bullets, armored police cars, dogs and the National Guard. And they show no signs of letting up.

I’ve been trying to figure out why so many people have had such a strong reaction to Brown’s killing. Because this isn’t new. His death is tragic, but fairly ordinary in the course of black people’s interactions with the police. We deal with this all the time.

On her MSNBC show this past Saturday, Melissa Harris-Perry demonstrated just how ordinary it is. She read a list of names of unarmed black men killed by police in the last decade alone, and it was chilling, to say the least. “Timothy Stansbury, unarmed. Sean Bell, unarmed. Oscar Grant, unarmed. Aaron Campbell, unarmed. Alonzo Ashley, unarmed. Wendell Allen, unarmed. Jonathan Ferrell, unarmed. Eric Garner, unarmed,” she said, before adding, “From 2006 to 2012, a white police officer killed a black person at least twice a week in this country.”

Twice a week. It’s business as usual for police to kill black people. And those are only a few names—many more black men and women have been killed by police. Many of them were also unarmed. Many were around the same age as Michael Brown. So what makes him special? Why did his death elicit such a strong reaction?

Of course, there are several factors to consider. That he was a young black man and not a young black woman is part of it. Black women/girls are often forgotten as victims in the discussion of police violence. That he was regarded as a “gentle giant” (Brown was 6'4" tall and close to 300 pounds) and a prospective college student are relevant. His image as “harmless” and “respectable” makes him more sympathetic to some people. That a mostly white police force routinely harasses black residents of Ferguson matters. And the fact witnesses say at the time of his shooting Brown had his hands up in the air, surrendering, also matters. It makes the six bullet wounds he suffered appear even more callous.

But for me, the detail that sticks is that Brown’s body was left in the street for at least four hours. Not only did people in the community witness the shooting, they were forced to look at the aftermath. For hours, they had to see Michael Brown’s bullet-ridden, bloody body lie rotting in the street.

It’s not unlike Henry Simmons’s bullet-filled body being hung from in tree in Palm Beach, Florida, in June of 1923. Or that of William Turner, whose body was hung, then cut down, then hung again before being burned in a bonfire in Helena, Arkansas, in November 1921. There was also Jim Roland, shot and killed by a mob in Camillia, Georgia, after having refused to dance for a white man who was pointing a gun at him in February 1921. And also Frank Dodd, shot and hung from a tree “in a negro settlement on the outskirts of DeWitt, Arkansas, in October 1916.” And so many more.*

They were lynched. They were killed and displayed publicly for the amusement of the lynch mobs and other white folks, and for the further terrorization of black people.

The police didn’t hang Michael Brown, but they made a public display of his killing. They left his body lying there for all to see. The psychic toll that exerts on a community calls to mind the eerie words once sung by Billie Holiday: “Southern trees bear strange fruit/ blood on the leaves and blood at the root…/ here is a fruit for the crows to pluck/ for the rain to gather, for the wind to suck.” But for Brown and Ferguson, the “poplar trees” were replaced with a city street.

It is an injustice that Michael Brown was killed. But injustice alone doesn’t move people to action. His killing is one of many. But the sight of Michael Brown’s body being left in the middle of the street is the closest this generation has come to seeing, in real life, the strange fruit of which Holiday sang. That’s an image you just can’t shake.

*Each of these lynchings is documented in the book 100 Years of Lynchings, by Ralph Ginzburg.